Long bond futures, open interest. There really shouldn’t be much to glean from just the raw count of US Treasury futures contracts at any given time, yet throughout the past quarter-century you could tell something was up whenever this particular contract’s open interest went up. More of long bond OI, the more it seemed (and still seems) trouble lurked (lurks).

I went over the background behind this quirk a few years back, reaching back all the way to the seemingly ancient days when LTCM was still a thing.

Open interest goes up when markets aren’t very sure about what’s in the future. Since UST’s are the settlement product for a variety of shadow trades, especially derivative FX, what’s being hedged here isn’t really UST yields or the US government’s credit risk.

It’s not a perfect indication by any means, but whenever open interest hits above 800,000 across the Chicago platforms it’s been in the past a sign of something.

Not a perfect indication, no, but it is related to a specific kind of deficiency – the one we talk about endlessly around the Eurodollar University universe. Dealer balance sheet capacity.

When money dealers end up being constrained, shadow money grows tight because shadow money is, in essence, whatever dealers can shove into their balance sheets. If they can’t add more, or have to cut back, that’s when the tightness begins to bind, the global dollar shortage becoming something more serious.

Where do bond futures come in?

A recent paper published jointly by a researcher at the Fed along with another at Treasury’s OFR reconnects with this story while providing both scrutiny and badly needed data. It leads to a dense, dizzyingly complex piece of the overall puzzle. I wrote about it in greater detail here, and while it isn’t necessary for you to read it first before going further it probably will help immensely. This discussion is an offshoot, merely a related matter to those bigger underlying themes.

I’ll just summarize some key facts: dealers police spreads but when they are constrained there is a crucial spread that goes un-policed, leaving open opportunity for other “balance sheets” to take on an extremely important dealer function. Warehousing.

Treasury futures prices aren’t supposed to deviate too far from the cash market, yet they do and it is one way in which dealers are rewarded for keeping these markets from getting too far out of whack (arbitrage: if futures are overvalued vs. cash, anyone can short the futures and go long cash bonds, financing the cash position, the warehouse, in repo for a nearly risk-free payday).

However, what happens if dealers can’t take on the job? The arbitrage spread widens and hedge funds enter to pick up the pennies – leveraged immensely by what’s available in low haircut collateral like US Treasuries. This basis trade becomes very popular among hedge funds whenever dealers step out of it. 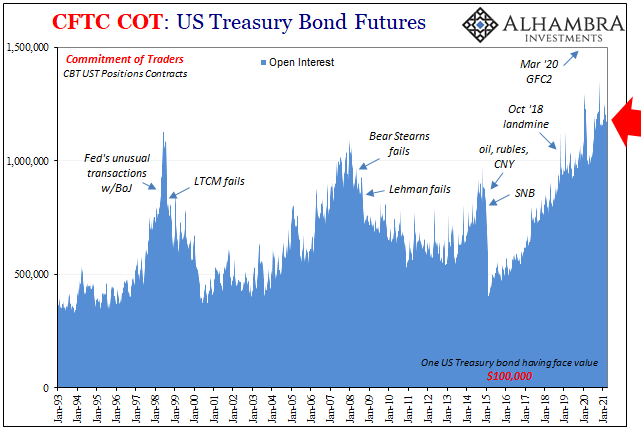 There’s actually a ton more to this, so many more added elements, but this does further answer another unfortunately nagging question of the past half decade or so whenever we see this kind of thing show up (hedge funds were on the basis back in 2015-16, too).

This story had been that the US government’s spendthrift ways would leave foreigners and then dealers unwilling to buy what Treasury sells particularly at auctions. Foreigners had been selling to dealers anyway (but for dollar shortage purposes, not any disdain over safe, liquid Treasury instruments; right away the story is in trouble), but it was claimed that over time they’d only be able to take so many on their books before Treasury prices plummeted once banks reached their limits.

Well, banks did reach their limits; they took on a huge amount of UST paper until they couldn’t take on any more. But – and this is thing – the Treasury market did not crash because, well, it was obvious that wasn’t going to happen.

If dealers didn’t want the government’s securities, it was perfectly clear by way of market prices someone else sure did.

I guess we aren’t supposed to notice that the rest of the world has been buying UST’s at a furious pace. How else did the yield curve invert in the first place? Sure, the money market fund and other nonbanks like it may have preferred commercial paper or even unsecured LIBOR to a very low UST yield, but someone is buying to push every UST yield lower to begin with.

Not just someone, but a whole ton of someones. To believe in this convoluted theory, you are asked to believe that primary dealers whose entire job is to find buyers for Treasuries are disrupting repo markets and other funding mechanisms because they can’t find enough buyers for Treasuries during a time when there is otherwise so much demand for Treasuries it has upended the natural order of curves everywhere.

That was 2018 into 2019 when UST prices were on the rise, demand obviously overwhelming even though by then dealers had themselves become (being melodramatic) overwhelmed. They had reached their capacities.

What capacity? To warehouse securities including UST’s (funded themselves by derivatives or repo). That’s really their primary job as primary dealers, to buy debt and credit at auctions, holding the assets on their balance sheets for time while they arranged to sell the inventory to the financial public. Anyone in the financial public (the secondary market).

Having done that, and having become balance sheet constrained (not by regulations, though I won’t get into that here), and with Treasury supply still sky high, why didn’t the opposite occur with prices falling, rates rising as so many kept predicting?

Hedge funds stepped in and provided their balance sheets – funded largely by repo borrowing – to warehouse every last Treasury dealers could not. Instead of dealers buying at auction, holding in inventory and then selling to the financial public, their balance sheet problems first opened up the basis trade arbitrage that, along with low haircut leverage in repo, gave hedge funds all the incentive they’d need to provide the warehousing capacities in lieu of dealers.

Eventually, as the basis trade winds down, a short run arb, the Treasuries get delivered anyway only in this case making an extra stop before eventually getting passed on to the futures contract holder who just so happens to be a member of the financial public (a pension fund, insurance company or something).

The warehousing duty shifted from dealers to hedge funds only so long as dealers remained balance sheet poor and hedge funds can depend upon repo. Thus, March 2020 (which I get into in that other article, so I won’t add anything else here).

This is how two seemingly opposite forces could align such that there never was “too many” Treasuries; how dealer constraints (tight money and dollar shortage) shrinking capacity could still end up with a flourishing Treasury market. Banks took on hundreds of billions for their own purposes, but then left hundreds of billions more (a trillion, according the paper’s findings) for the hedge funds to warehouse.

It all ties together – dealer balance sheet problems mean, again, tight money which would figure in the persistent demand for safe, liquid assets from the financial public (including other parts of the banking system) whether or not they go through hedge fund balance sheets in between. In fact, the more hedge funds end up doing the more we can infer – with OI telling us – that dealers must be inhibited in the first place and thus overall demand for Treasuries much more than we are led to believe.

The “too many” Treasuries argument had said that dealers were forced to hold securities they didn’t want because they’d become too risky. That was never the case even if dealers had reached a limit; they took what they wanted (which was a lot) and then easily moved the rest along for other parts of the system to take care of. The financial public still demanded these things to the point that it became profitable for other non-bank entities to fill in this warehouse gap.

All that said, dealers constrained leaving vital warehousing to get done by hedge funds, that’s a whole other set of issues and more than anything another indication of just how unfixed and unsteady the monetary system continues to be. No matter how many bank reserves.