One of the more compelling aspects of the last LABOR SHORTAGE!!!!, in an outright contradictory way, was how it was made up of entirely anecdotes. Lacking data, especially wage data, the narrative was instead kept up and alive by the media hyping every small creative innovation companies were using if only to avoid having to actually pay their workers and prospective workers the market-clearing price.

The stories have returned in 2021 already granted a similar seriousness if for those same reasons. Inflation sells, or at least the idea of it is in demand.

But the data remains ambiguous – at best. And even where this is the case, there’s more to question than to commend from the perspective of any prospective labor shortfall. Like JOLTS data released yesterday, the raw numbers appear to support the idea that companies once again aren’t willing to pay what’s required to satiate their purported overdrive for workers.

It could be a number of possible reasons but the most likely, certainly in my view (FWIW), is likely to have started with low starting pay supplemented by promises of better pay down the road. Companies, especially small and medium-sized businesses, the same who claim to be most hard-pressed to find workers, are and have been deeply hurt by the recession. Thus, the pay mis-match.

Also like 2018, but having been taken now to an extreme in the wake of the deep, damaging 2020 recession. Businesses may want some more workers but just don’t have the true capacity (or sustained optimistic vision to take risks) to pay them enough.

Or pay them at all?

Since the labor shortage has been all about anecdotes, this one’s a real doozy:

American Airlines is asking its headquarters employees to volunteer at Dallas-Fort Worth International Airport this summer as the carrier faces an influx of summer passengers due to pent-up pandemic demand…Those headquarters employees, who work in fields such as network scheduling, planning and communications, won’t be paid for the additional shifts and must volunteer outside of their normal job duties. [emphasis added]

The airline had let go about 30% of its support staff in the wake of last year’s devastating downturn – despite having been handed billions in PSP’s (Payroll Support Program under the CARES Act) generosity. With “recovery” now underway, American does appear “desperate” for workers if only in the sense they aren’t so impatient they’re willing to pay anything greater than quite literally zero.

At least the company states it won’t require existing workers to “volunteer”, not explicitly, anyway. Take this job and shove it? 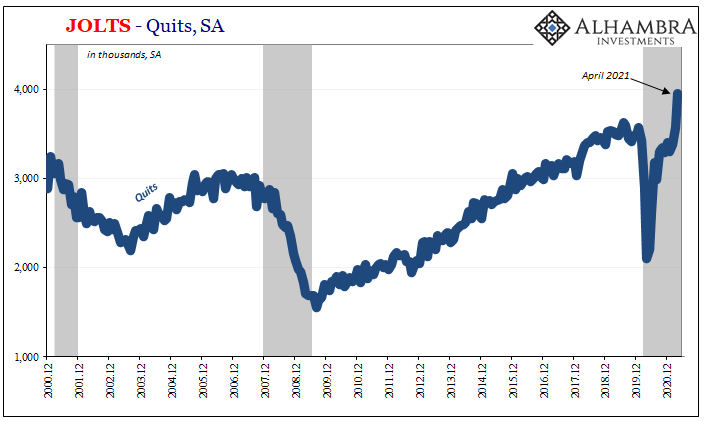 This certainly doesn’t prove, conclusively or otherwise, the anti-shortage theory, but it is certainly one labor market anecdote consistent with recent data and that specific interpretation of it.

As is any number of secondary data sources, accounts like consumer credit, revolving credit, in particular. In the wake of the last big “recession” in 2008-09, revolving balances were paid down by prudent consumers increasingly aware of labor market insufficiency that in the media was always called recovery (or at least green shoots). Maybe they were still employed, yet hard pressed to ignore the real and rising possibility they could very well be next on the already-stretched unemployment line.

Employing spare cash to reduce discretionary debt rather than spend and borrow as QE/monetary policy had anticipated and counted on, it was quite understandable outside that worldview. And it repeated in the same way last year, continuing up until just recently. 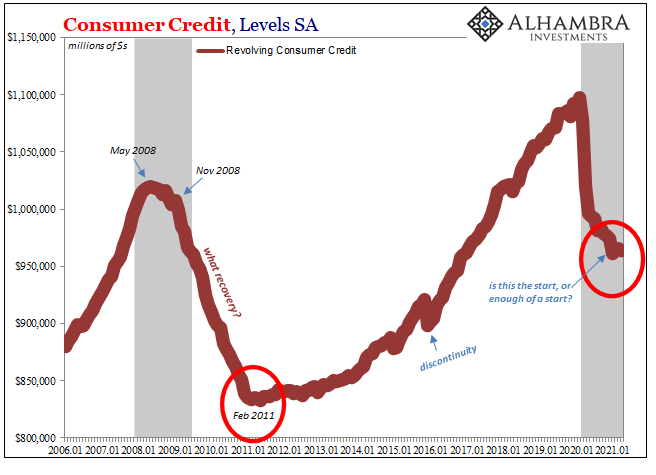 According to the Federal Reserve’s figures (which are subject to big revisions at times, so keep that in mind), this systemic credit card “glut” may have bottomed out in February. There was a small rebound in aggregate revolving balances during that month ($3.1 billion) then an even smaller one in March ($1.4 billion, despite huge payroll estimate) but then another decline in April (the latest estimate for -$2.0 billion).

While it doesn’t rule out the initial stages of recovery, it doesn’t exactly paint the picture of an unambiguous start to one, either. Rather, this is at best too much like all these things posted above along with another possible unwelcome comparison adding to them – looking too much like 2011 when macro factors determining revolving credit reached that trough but failed to reignite immediately.

If the 2010-12 period was notable most for its lack of recovery (someone even termed it a “new normal” it was so unrecovery-like, a name which stuck for that reason) then to see at least a few months go sideways right now in the same way doesn’t bode well.

The same is true for the rest of the consumer credit data – exclusive, of course, of the federal government’s non-economic involvement in it. The feds lend to practically anyone at any pace according to an entirely different doctrine. 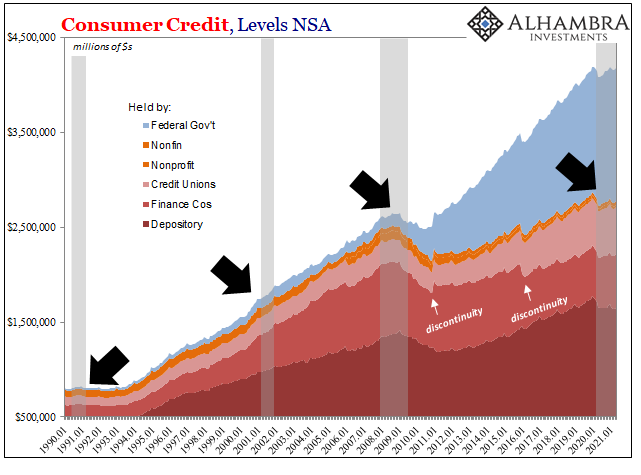 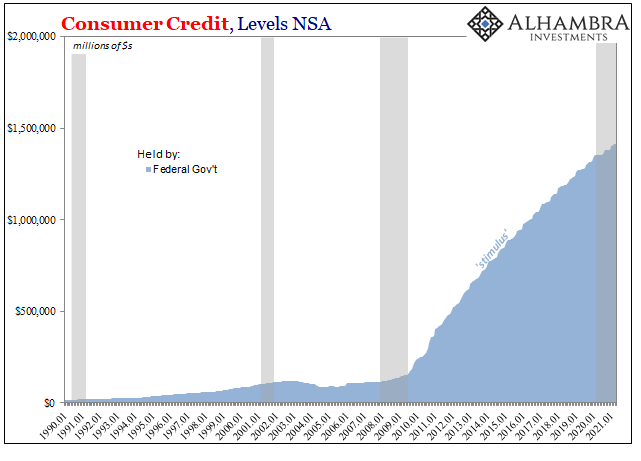 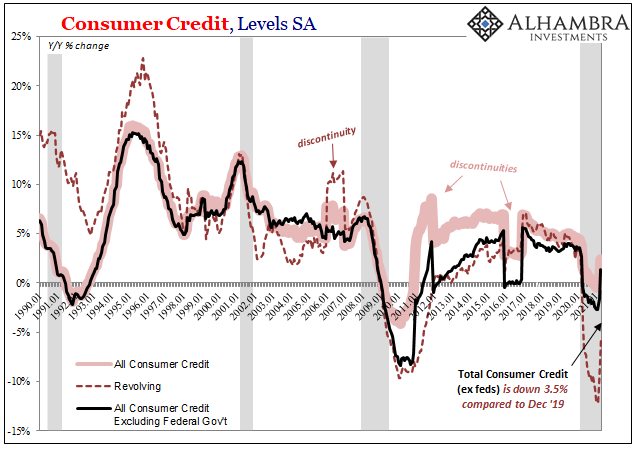 Outside of the government, consumer credit in April 2021 increased year-over-year on base effects alone. Compared to December 2019 – the last peak – total consumer credit is still down more than 3.5% which remains firmly in recession territory.

This, too, would be consistent with companies who claim to be desperate for workers as the economy rebounds but since a rebound isn’t a recovery they don’t appear to be willing (or able; see: American Airlines) to pay the rate workers want and demand which then negatively affects how consumers as workers manage their own finances (acknowledging the massive binge on goods more than balanced by the continued recession in services spending).

With COVID and the pandemic fading further into history, what’s being exposed is today an economy that may have been more damaged and susceptible than has been believed up to this point. First, in the initial days of reopening, there was the “V” explosion – if in expectations rather than reality because it never happened, nor did it last very long.

This was followed – if first forced by last year’s “unexpected” summer slowdown – by the second try for a “V”, this other one predicated on believing government “stimulus” could comprehensively mitigate, if not better (inflation), any longer run damage. If Uncle Sam would just pay everyone, including airlines, this will all go away.

But as 2021 emerges into the light of a more likely COVID-free world, we take these first steps looking around at an all-too-familiar landscape. The economy gets knocked down and doesn’t ever want to, or is not able to, get back up again.

Inflation? Businesses that can’t pay workers, no matter how much they claim to be desperate for them, aren’t going to be able to sustain let alone achieve it. Not from this. 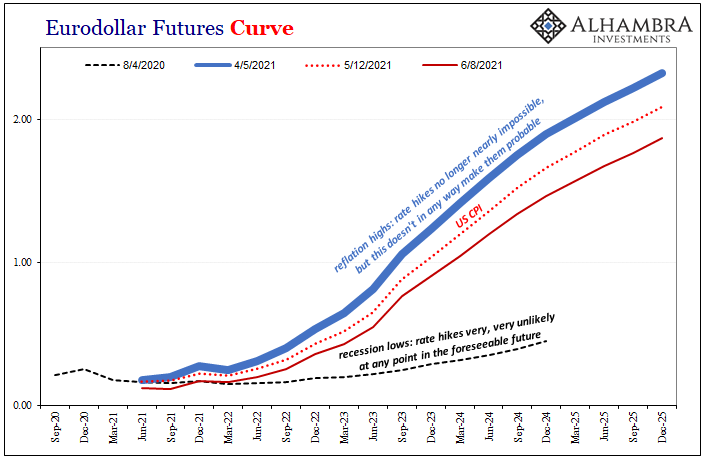 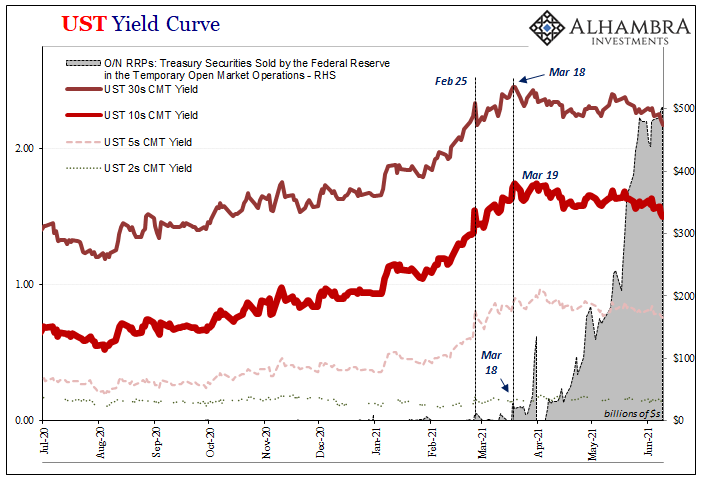 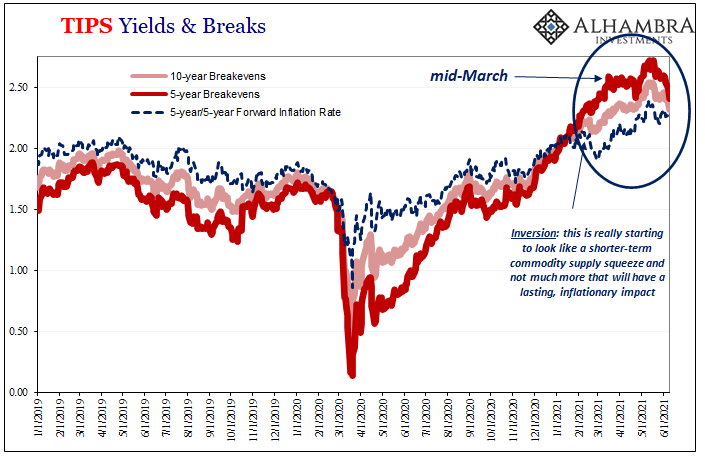 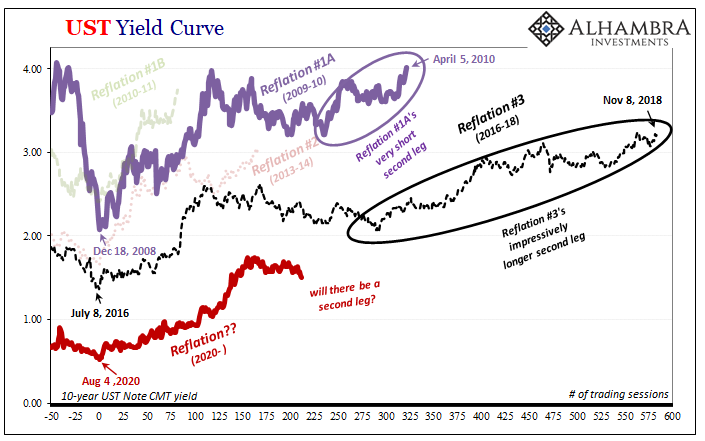 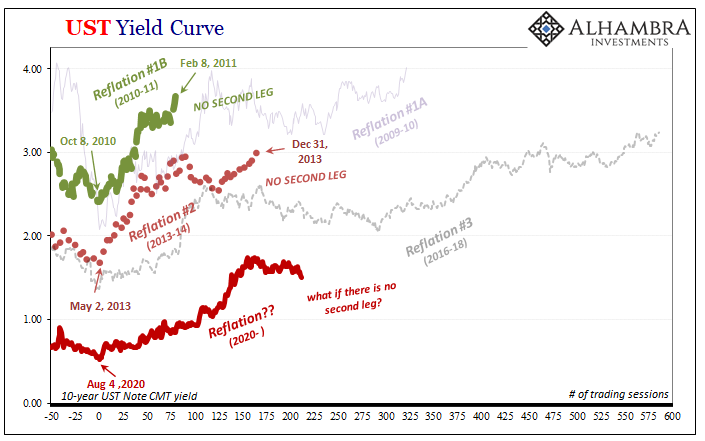 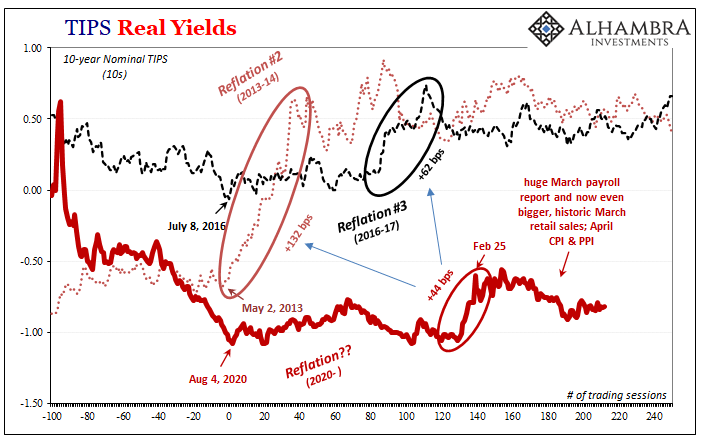