I thought of that scene the other day when a good friend in the investment business told me that investors today are panicking into the market rather than out as they were last spring. I have to say, I find it hard to disagree with him but I think there are specific parts of the market where panic is more obvious than others. For instance, 10-year TIPS yields are trading at all-time lows. While I often describe real rates as an indication of real growth expectations, TIPS yields also represent demand for inflation protection. Right now, investors are willing to accept a negative yield of 1.15% just to have protection from inflation. I’d say that is a bit panicky. I was taught many years ago not to worry about things that are already well worried. I guess I can strike inflation off my list (maybe).

Most people think of stocks when we say “the market” and US stocks are certainly expensive. There is a must-own list of stocks everyone is familiar with and most of those are very expensive. Alphabet, Apple, Netflix, Facebook, and Amazon are great companies but they are not cheap. And we found out last week what happens when one of these high-priced stocks disappoints the market. Amazon fell 7.5% Friday after its earnings report disappointed investors. Having said that, I’m not sure investors are panicking into these stocks. It isn’t like in 1999 when “investors” were paying 100 times earnings for Cisco. Make no mistake, stocks are expensive and people aren’t buying because they want to but rather because they feel like they have to. But I don’t think they are panicking into “stocks”. When my friend says they are panicking into “the market” what he really means is they are panicking out of bank deposits or other safe assets.

From a larger perspective, I’ll offer some anecdotal evidence from our own business. Our business is growing rapidly and we talk to a lot of investors. That isn’t new but I have noticed a difference recently that I think confirms to some degree what my friend said about people panicking. We have recently talked to a lot of investors who have all cash or near all-cash portfolios. Some of them got out at the onset of the pandemic and others have been sitting on the sidelines for much longer. They seem to have reached their breaking point and feel like they have to get invested. I don’t worry about that too much with our portfolios because stocks are a smaller part of our allocation than most other advisors. We own 5 asset classes while most investors only own two. If they own a third (usually gold), they own it in such small quantities that it would never make much difference to the outcome. But if we’re seeing this, other firms are too and at most of those firms, clients are only going to get the standard stock/bond portfolio with the larger part in stocks. People are panicking into one of the most expensive stock markets in history because safe assets don’t pay. I’m not sure that is exactly the result the Fed wanted but it is certainly the one they’ve achieved.

I think this panicky behavior probably explains some of the recent demand for bonds as well. There has been a general sense of disbelief about bond yields in recent months (although not around here) as the 10-year yield dropped from 1.75% to the current 1.24%. Here at Alhambra we are generally in the Occam’s Razor camp and take these things at face value. Falling bond yields mean falling growth expectations. I’ve been writing all year that expectations of some kind of post-pandemic economic boom were misplaced and I think I got a little wood on the ball with that one. But even here, we understand that there have been some unique supply/demand dynamics playing out recently that favored higher bond prices. Treasury issued fewer bills, notes, and bonds over the last quarter as they drew down their general account at the Fed. One of the results of that is that banks had a large inflow of deposits which they generally used to buy Treasuries and MBS. And of course, the Fed continued its buying spree. Add to that the demand from investors fleeing cash deposit rates of basically 0% and you get a bond rally that no one “expected”. Decreased supply + increased demand = higher prices isn’t all that difficult to understand.

And yes, the economic recovery has slowed, although I would not say it has “stalled” as I heard someone say recently. The rate of change has probably peaked – although I suppose we could get another surge post-Delta variant – but the trajectory is still up. The economic slowdown is obvious in the recent economic releases but most of them are still positive. Durable goods orders released last week were less than expected but still positive. And within that report, core capital goods orders were up a healthy 0.5%, the 15th consecutive monthly gain. More importantly, I think, is that this series has finally broken decisively above the 2000 peak. Yes, 2000.

Personal income and consumption numbers were both better than expected when reported last week. More important was the composition of both, where private wages and salaries outpaced a drop in government benefits, and services spending more than offset a decline in durables which was mainly in autos and unsurprising in the least if you’ve visited a car dealership recently.

The big disappointments last week were in housing and of course 2nd quarter GDP. New home sales and pending home sales were both down which is primarily a result of the 17% year-over-year rise in prices which was also reported last week. I am not worried in the slightest about housing though. We have not built nearly enough housing since the last bust and I expect builders to be playing catch up for several years to come. Prices are a self-solving problem. GDP growth in Q2 was quite a bit less than expected but the details were not bad in my opinion. Personal consumption of services led the way, a flip from Q1 when goods spending led. Gross private domestic investment fell but that was mostly about investment in structures whether non-residential or residential. Again, that is not exactly a shocker to anyone who has been paying attention. And I don’t see how residential investment can’t increase over time despite the odd down quarter. The other big drop in investment was in inventories which, again, isn’t a surprise if you’ve been watching inventory/sales ratios which are right at all-time lows. That is at least partially about supply issues but also concern about future goods spending. We’ll see how that plays out but recent inventory reports were up so that problem may already be on the way to being solved. One last area that subtracted in the quarter was net exports, where imports once again grew faster than exports. That isn’t good news about the rest of the world and that is concerning but it doesn’t show domestic weakness.

So, investors may be panicking a bit but some of the enthusiasm for investing is justified by current economic conditions. The economy is growing above trend right now. As I’ve said in the past, I can’t predict the future so that could obviously change abruptly but if it does it probably won’t be from anything anyone is worried about right now. Let’s hope Hasbro has a good supply of GI Joe’s with the Kung Fu grip (if you didn’t see the movie that won’t make sense).

The various manufacturing surveys continue to be positive with the Dallas and Richmond Feds reporting last week. The Chicago PMI was also strong if down from the recent stratospheric readings. 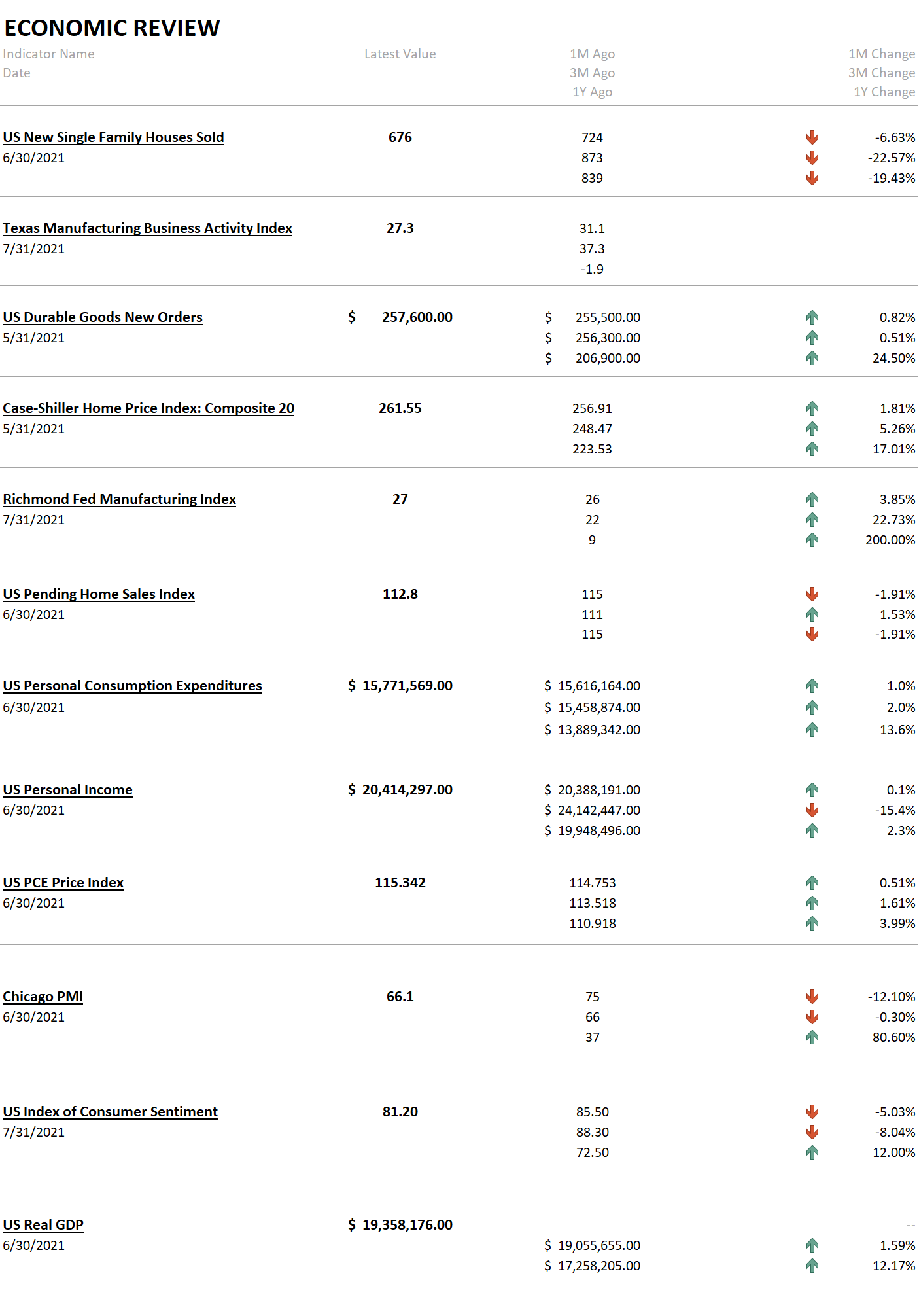 We get more construction data next week and a small gain is expected. I’ll count that as a surprise if it happens. We also get the two ISM reports on manufacturing and services. Those are expected to remain strong but a number in the high 50s rather than one with a 6 handle wouldn’t be shocking since we are slowing a bit. The big report next week though is the employment report which is expected to be quite strong. I generally think it should be but this always volatile series can really surprise sometimes. Just remember, in the long run about the only thing that is important is the sign, + or -. The revisions are so large that even that is questionable. 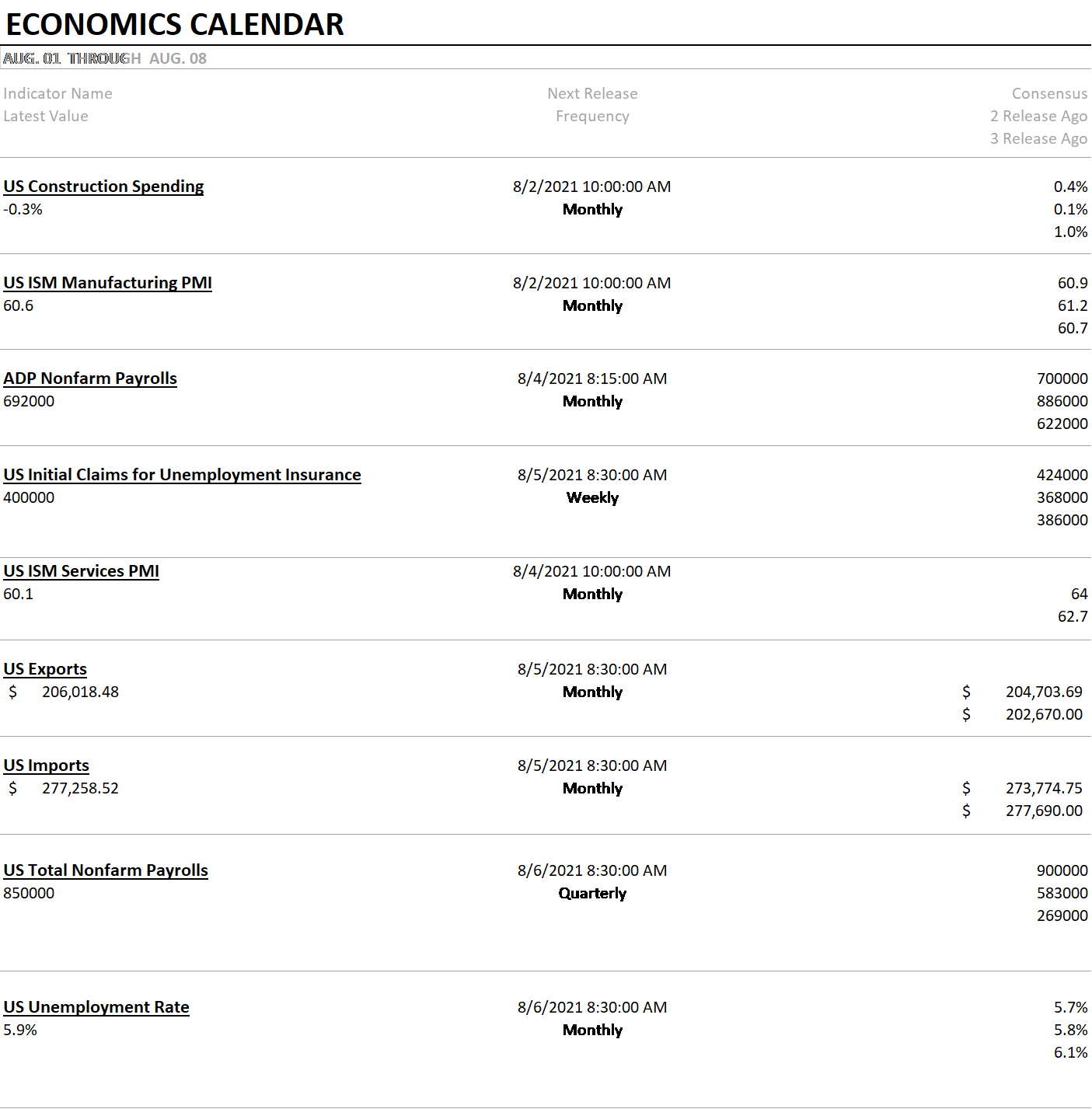 Oh, my. Large-cap stocks had a down week!!!?? Down 0.37%??? Whatever could be wrong?? Meh. It means nothing. Commodities had another good week and continue to lead for YTD. Real estate was also higher and remains in second place YTD. Asian stocks continued to slide in the wake of the China crackdown on whatever they decide is not in the interests of the party. Which is just about anything to do with Chinese tech companies apparently. Europe and Japan were higher for the week.

The dollar was down on the week so a lot of the traditional weak dollar plays did well – commodities and real estate just mentioned as well as value stocks. I continue to wait for direction from the dollar but it is still stuck in the long-term range its been in for six years. It is at the bottom of that range though so I’m continuing to lean to a weaker dollar outcome. Futures market positioning would seem to favor that as well with long dollar being a pretty popular position right now. If the dollar does get in a more sustained downtrend expect commodities and real estate to continue leading. Foreign stocks will also likely do well but considering what is going on with China it will probably pay to be choosy. 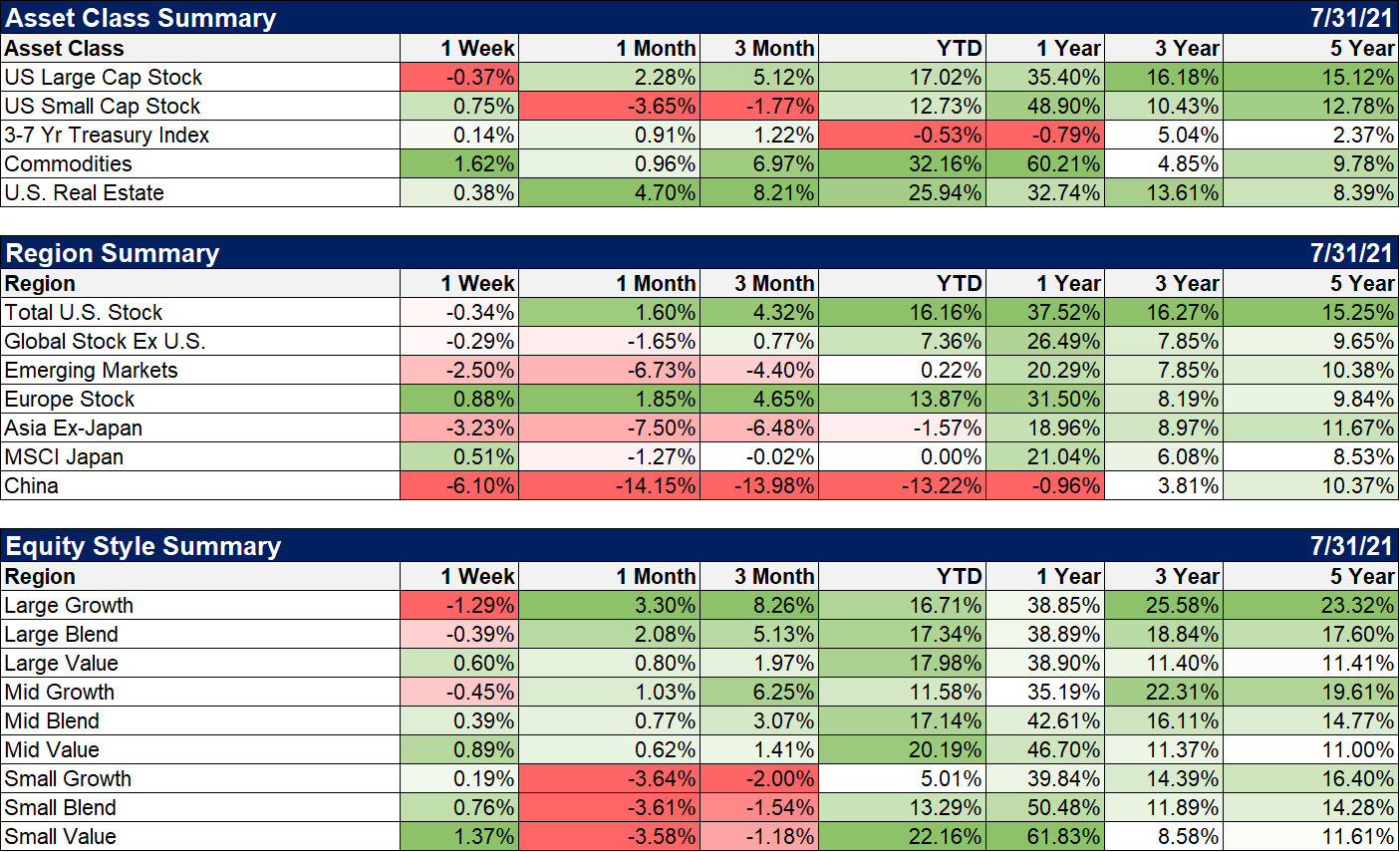 Weak dollar plays stood out on a sector basis too, with materials and energy the biggest winners. 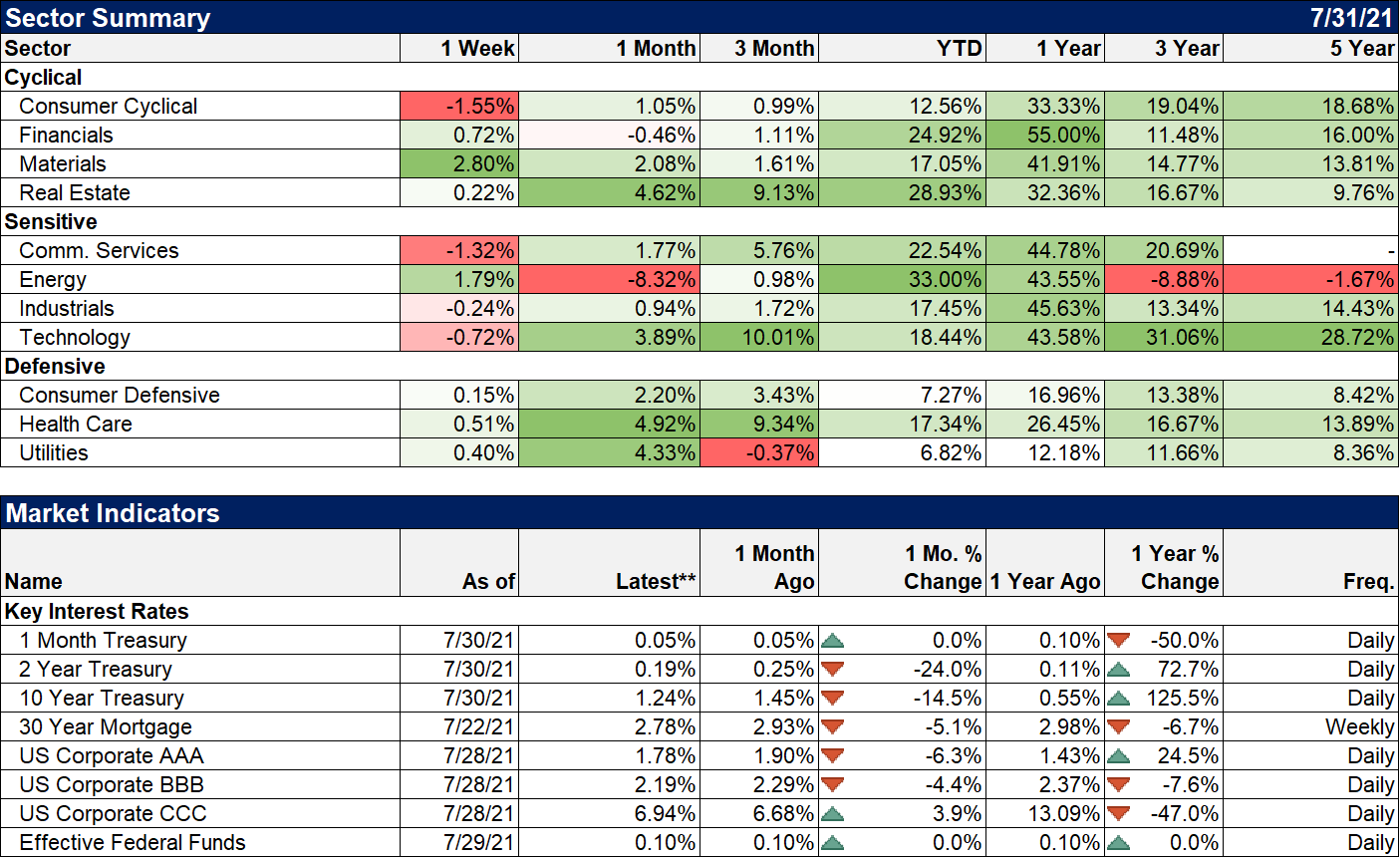 With the dollar down a bit, gold had a good week but copper had a better week so the copper/gold ratio has resumed its rise. The 10-year yield generally follows the ratio so this reinforces my view that rates are probably bottoming now or soon. A gap has opened between the ratio and rates and history says it will be closed one way or the other. 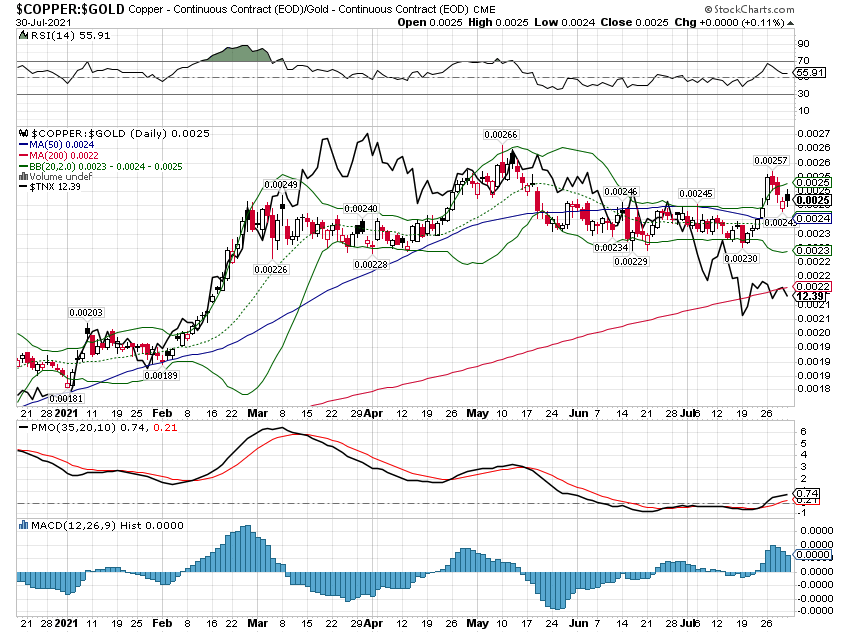 There are lot of investors coming into the markets recently and it is a bit concerning; no one wants to be the last one in the pool. If you are one of those investors who has been sitting things out and you need to get back in, make sure you have a plan, a process to follow. If you hire an advisor make sure they have a process to follow. Make sure you are properly diversified across asset classes beyond stocks and bonds. And for gosh sakes, take your time. There is never a good time to panic.