To go back only to last November, lost amidst the elections and then understandably overwhelmed by vaccine euphoria, the SOFR saga took an expected turn. It was predictable especially given the realities of the situation behind this unforced string of errors. Central bankers and their Economists are, we’re constantly told, the best and brightest, these most capable of monetary stewards using their tools, whatever they may be, to the greatest positive effects on the economy.

You don’t fight the Fed, so it goes, because those at the Fed know way, way better than you.

For nearing a decade, these bureaucrats have waged war against one not of their own: LIBOR. The actual reasons they have done so have nothing whatsoever to do with the charges they’ve trumped up in order to sanction its termination. Officials hate LIBOR because it had so nakedly exposed their true crime(s).

Having been at it anyway for nine years, you’d think they’d have been able to at least come up with a useful alternative. Make what you will over the justifications, at the end of the day regulators should be able to say they’ve studied the situation well and used their vast (presumed) technical proficiency to produce a better product.

It’s August 2021 and they cannot even say they have finished their product.

Writing in early November, I reminded readers of the only rational conclusions to that end:

Why? Because SOFR is nothing more than the height of institutional arrogance pressed into action by even more pressing technical incompetence. Not only was its genesis shrouded in all the wrong reasons, worst of all the official demand that it substitute for LIBOR forever forward further betrays what should be a shocking lack of understanding about how, you know, the monetary system actually works.

I wrote that on November 4, 2020; a little over three weeks following, this arrogant morass of “regulatory” authorities was forced to scrap another of their arbitrary deadlines. It had been previously decided LIBOR would stop being published in all its tenors by the end of 2021, letting the world start afresh, finally fully freed from the LIBOR terror on the first day of 2022 when SOFR would take over from there.

Instead, at the end of last November all the various agencies and institutions got together realizing this was in no way a realistic possibility. While ICE Benchmark Administration – the private clearinghouse which took over the LIBOR dataset from the “dishonored” British Bankers Association – agreed to hold fast to the December 31, 2021, cutoff for the other currency “IBORs”, as well as the 1-week and 2-month LIBOR tenors (which hardly anyone uses anyway), the rest of the crucial US$ rates will now be kept up until June 30, 2023.

Contrary to what’s written in most (of the few) media accounts, what’s coming will not be outright prohibition. Currently, it has been “recommended” that banking participants refrain from using LIBOR when pricing any additional loan, products, or hedges at the earliest practicable moment, and certainly do so before the end of this year.

If banks do not, it’s not like there are draconian penalties which await them. There aren’t even proposed penalties. On the contrary, to date authorities have only said:

Given consumer protection, litigation, and reputation risks, the agencies believe entering into new contracts that use USD Libor as a reference rate after December 31, 2021, would create safety and soundness risks and will examine bank practices accordingly.

Have any of these bank examiners met the offshore money world? Its entire purpose was to break free from what bank regulators think is safe and sound.

Thus, without much of a stick by which to negatively reinforce this SOFR-adoption mandate, there must instead be an overwhelming carrot from which to lure the banking system to this far-better alternative, the very one our “best and brightest” governmental officials have been painstakingly working about for, again, nearly a decade (the ARRC was first convened, after all, in 2014).

SOFR is not in any way an appropriate substitute for LIBOR. It really is a square peg/round hole situation. But rather than go back to the drawing board, they keep pounding away at their right-angled creation regardless. As I wrote just four months ago:

Even the banks – the closest things the Fed has to friends – are like, WTH? This isn’t sound policy, or even a decent idea. Policymakers really have no idea what they are doing.

There are two major (and I mean MAJOR) problems with SOFR as a proposed replacement regime for the current LIBOR. The first is, SMDH, SOFR itself is nothing more than an overnight rate without any inherent, implicit term structure. No one will ever, on this version of Earth, simply roll from a contract or financial product priced by, say, 3-month LIBOR into one priced at an overnight SOFR rate.

The ARRC and its composite comedies have figured that near-spontaneously a futures market would develop to cure this most fundamental lacking. Quite predictably, it’s not going all that well:

Market participants were frustrated after the Alternative Reference Rate Committee (ARRC), a group of market participants that selected SOFR to replace Libor, said in March [2021] that it will not be able to recommend a forward looking SOFR rate by mid-year, its former target date.

The second massive deeply fundamental difference between SOFR and term-LIBOR – even if a usable forward SOFR curve might eventually be brought up from nothing at this late date – is that SOFR is derived mainly from repo transactions and is therefore largely a risk-free rate. LIBOR, on the other hand, clearly comprises also liquidity risk parameters within its atomic structure. 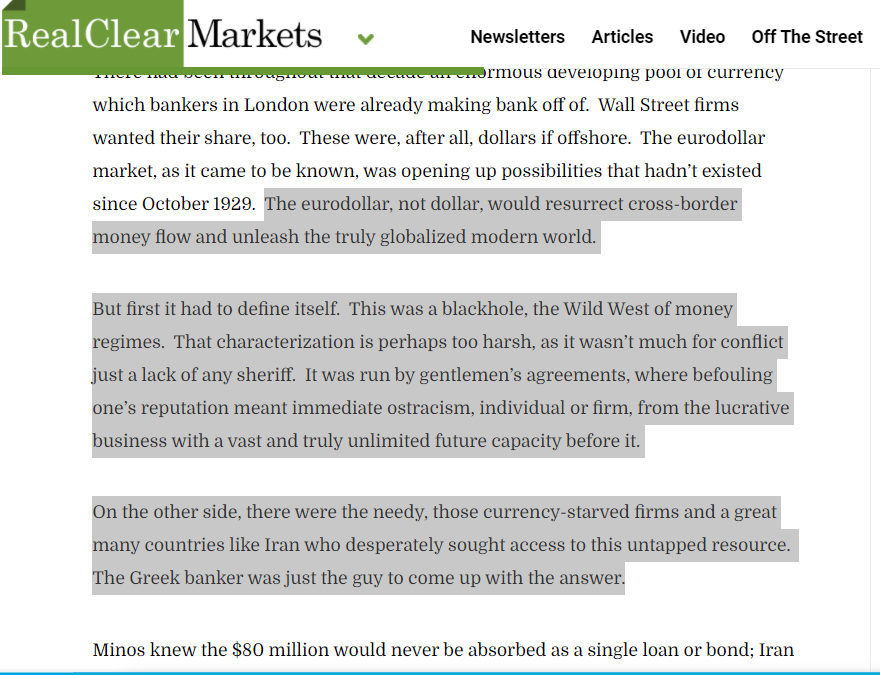 WHERE DID LIBOR COME FROM IN THE FIRST PLACE?

Back in 2018 and 2019, after SOFR had launched, officials got “everyone” together to begin mapping out their version of a theoretical transition. The first major hurdle was to come up with a “fallback” provision, or really a set of provisions. When (presumably) LIBOR stops being available one day, what will be used to price hundreds of trillions in contracts the next?

This is why the ICE deadline was pushed back by 18 months last November; not all the relevant fallback details have been worked out sufficiently, or even minimally. Neither the ARRC nor anyone else has definitively described all the necessary components to avoid market disruption.

It had been merely assumed that the forward SOFR market would have long ago already been in place, as it was how a set of industry-wide agreed-upon “adjustments” would have been developed to “correct” risk-free. Again, not only is SOFR lacking term-structure, it doesn’t have liquidity/credit risk components.

To go from LIBOR to SOFR, then, this would require several key calculations get made from the sort of black box formulations deeply frowned upon not all that long ago (by these same incompetent clowns). Without market inputs for term structure or liquidity risk, these “best and brightest” are now simply going to wing it and come up with spreads derived from past data.

Following the Alternative Reference Rates Committee’s (ARRC) March 2021 announcement that it had selected Refinitiv to publish its recommended spread adjustments and spread adjusted rates for cash products, Refinitiv today announced the launch of a prototype rate. The Refinitiv USD IBOR Cash Fallbacks, as the rates will be known, will leverage the firm’s extensive experience in administering benchmarks, such as Refinitiv Term SONIA, to create a family of US Dollar (USD) fallback rates for use in cash markets…

What this all means is: the ARRC has selected a private firm to calculate both term-spread and risk-spread adjustments which are going to be applied system-wide to about $300 trillion in derivatives, hedging, and financial products contracts. Without a market-based structure in place, regulators are going to impose, essentially, the most basic fundamental constructions for a global monetary system they can’t possibly understand given how they are now left with no other alternative (except scrapping this ridiculous idea) but to calculate for themselves this most basic fundamental construction.

And this is only part of it; many banks are already testing out other possible alternatives beside SOFR (I’d be shocked if many financial market participants go anywhere near this morass of incompetence), everything from Bloomberg’s BSBY to American Financial Exchange’s Ameribor.

You might legitimately hate LIBOR, but how does any of this other clutter plausibly achieve the purpose? To go from one set of complete rates, term and liquidity risk all in one, to this chaotic mess is quite definitively going in the wrong direction. Getting rid of one key if opaque yet comprehensive benchmark derived by a small group of banks and replacing it with several other ill-suited replacements opaquely derived from the black box mathematics of government-approved listings.

LIBOR was, they said, the Crime of the Century, yet more than nine years after it had been identified as such, it’s still here and those charging it with these most serious of monetary offenses have waited until the last minute (having at least seven years head start) to scramble just to create some minimal sense they might be able to cobble together a workable plan. They don’t.

This is the unmistakable hubris of central-banks-are-central worldview; that it is as easy as flipping a switch. The myth we’ve all been told from the beginning of Econ 101, the same which is perpetuated every single day by every single source of financial media. Central bankers pick the tune, and everyone immediately dances appropriately. Money, finance, economy, it is all just that easy.

The real world – the real monetary world – instead is 180 degrees backwards from this mythologized perspective. As everyone should see, that is SOFR. 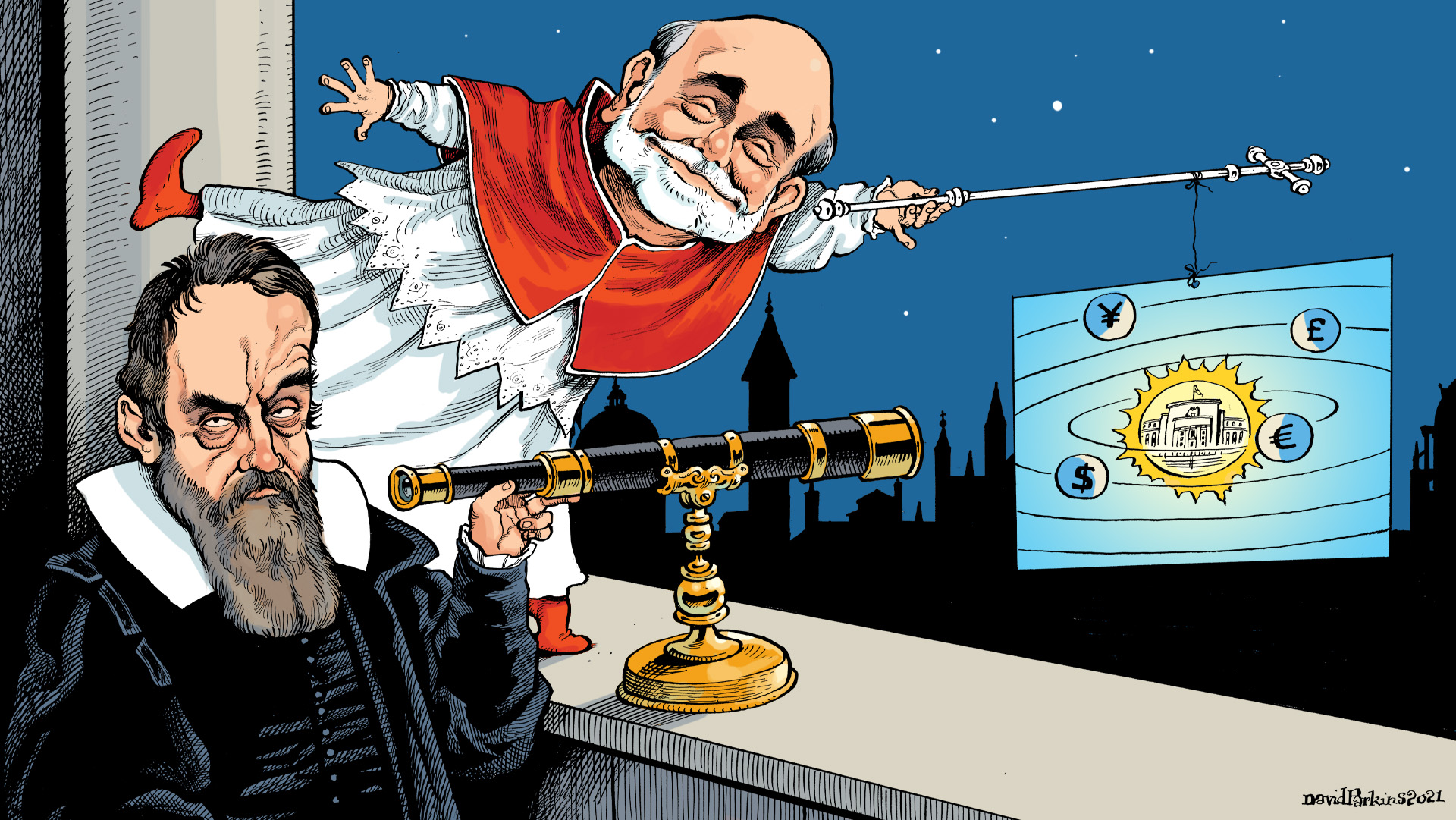