Weekly Market Pulse: Not So Evergrande

Weekly Market Pulse: Not So Evergrande

US stocks sold off last Monday due to fears over the potential – likely – failure of China Evergrande, a real estate developer that has suddenly discovered the perils of leverage. Well, that and the perils of being in an industry not currently favored by Xi Jinping. He has declared that houses are for living in, not speculating on, and ordered the state-controlled banks to lend accordingly. Evergrande is known as a real estate developer and it certainly is, but it is also a sprawling company with investments in multiple industries including, of course, an electric car company. Cutting off its financing isn’t just going to affect the Chinese real estate market. And real estate accounts for roughly 70% of household net worth in China so everyone in the country is going to take a hit. But is there a connection to the US or other developed country stock markets?

Real estate represents anywhere from 15 to 25% of the Chinese economy depending on what source you want to believe. The exact number isn’t really important, just suffice it to say that construction is a very large part of China’s economy, and speculating on real estate is a national pastime. But the impact of it goes well beyond China. It is well known – according to the news reports I read – that China’s share of global commodity consumption is large and a large part of that goes to the construction industry. I read some research last week that claimed China’s property sector accounted for 20% of global steel and copper output. That sure sounds big and scary – as I’m sure the authors intended – but I would just point out that copper prices are near their all-time highs and actually finished higher last week. The general commodity indexes were higher too. If Evergrande’s demise is going to materially impact commodity demand you wouldn’t know it from last week’s action. Maybe China’s commodity consumption isn’t “well known” in the commodity pits.

The doom and gloom crowd spent all of last week trying to convince investors – or themselves – that Evergrande is China’s “Lehman moment”, based on nothing more than the fact that Evergrande and Lehman both involved real estate. And in the case of Lehman, that connection was incidental but superficially I guess the comparison made sense. There are certainly banks with exposure to Evergrande but the vast majority of them are Chinese. HSBC has been mentioned as having exposure but they stopped lending on Evergrande properties a few months ago. UBS was said to have exposure but the CEO said last week it was immaterial. Credit Suisse, which seems to be the new Citibank, involved in just about everything that has blown up the last few years, was so happy they avoided this one they almost broke an arm patting themselves on the back. US banks, as best I can tell, have no exposure. There are some junk bond funds with exposure but for the ones I looked at, it was a rounding error. There just doesn’t seem to be much interconnection with the rest of the global financial system and that was reflected in credit default swaps and credit spreads which barely moved on the week.

Evergrande appears to be mostly a domestic China concern, at least for now. The impact will be seen in Chinese growth figures which were already on the decline. What does that mean for the rest of the world? I don’t know yet but I am old enough to remember the last time the world’s second largest economy popped a real estate bubble. That was Japan in the early 90s and their economy certainly suffered over the next decade but you’d be hard-pressed to find a big blowback on the rest of the global economy. Maybe China will be different but I can easily make a case that a Chinese economic slowdown would be beneficial to the rest of the world. Suppose those estimates of commodity consumption are correct and copper and steel prices take a tumble. That probably wouldn’t be pleasant for Chile and Brazil (iron ore) but I’d guess that the rest of the world would welcome cheaper steel and copper. There are plenty of things to worry about right here in the US with political wrangling over the debt ceiling, a possible government shutdown (which I generally take as a positive), and potential tax and spending hikes. I see no need – yet – to start worrying about Xi Jinping’s re-Maoing of the Chinese economy.

For stock investors, I think the more important event last week was the rapid rise of the 10-year Treasury yield from Wednesday to Friday. I don’t mean to imply that higher rates mean stocks are going to fall because history says that isn’t the likely outcome. Rising rates are generally associated with rising growth expectations which doesn’t exactly strike fear into stock investor’s hearts. And that is what we saw last week as inflation expectations were unchanged as real rates rose exactly the same as nominal rates. Higher rates will affect which stocks perform well though, and we started to see that last week. Higher rates and a steeper yield curve were positive for financials. Energy stocks also had a very good week. In general, I’d expect value stocks to perform better if rates keep rising while growth stocks take a breather.

The move in rates last week came with seemingly no trigger. There was no economic data or other event that should have changed growth expectations. Of course, there really wasn’t any spur for the bond rally of the last 6 months either. But eventually, the data caught up with the market and it probably will again. I say probably because markets are not always right, just most of the time. What I think we’re going to see over the next few weeks is the market anticipating the end of the Delta surge and the resumption of the economic re-opening both here and in Europe. Whether it does or not or how long it might last or how far it might go I don’t know. But that investors will try to front run the virus isn’t exactly news. Of course, people will try to get ahead of events.

During the course of an economic cycle, growth will ebb and flow. We’ve just come through a growth rate slowdown and bond yields now seem to be anticipating a growth rate upturn. I’m not convinced yet and there’s a lot of potential potholes ahead – mostly political – so I’ll continue to classify the environment as slowing growth/strong dollar but that may not last long. One thing I still don’t see is any change in the dollar trend. It is a short-term uptrend and I’ve acknowledged that but the long-term trend is no trend at all. The dollar index is in the bottom half of the range it’s been in for over 6 years and I don’t know what would change that. The lack of a dollar trend makes our job a bit more difficult and shorter-term, but we play the hand we’re dealt. 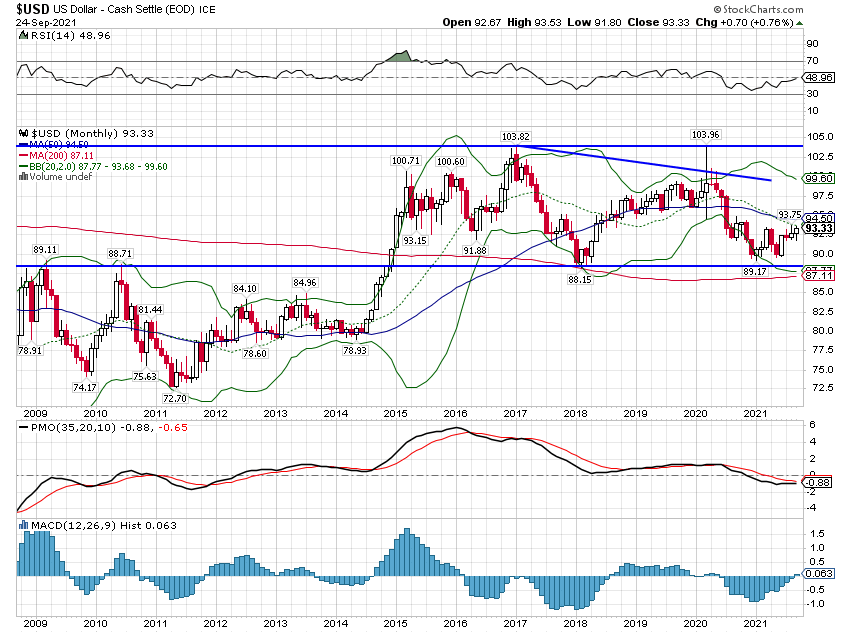 The economic data last week was a little better and better than expected but not significantly so. Housing starts improved as have sales over the last quarter but still well below last year’s peak. Existing home sales are still softening and we’re starting to see some price cuts which is the only thing that is going to have a big impact on sales.

The monthly reading of the CFNAI fell back a bit but the 3-month average moved higher to 0.43, a reading that indicates the economy continues to grow above trend. We had a slowdown but it didn’t amount to much. 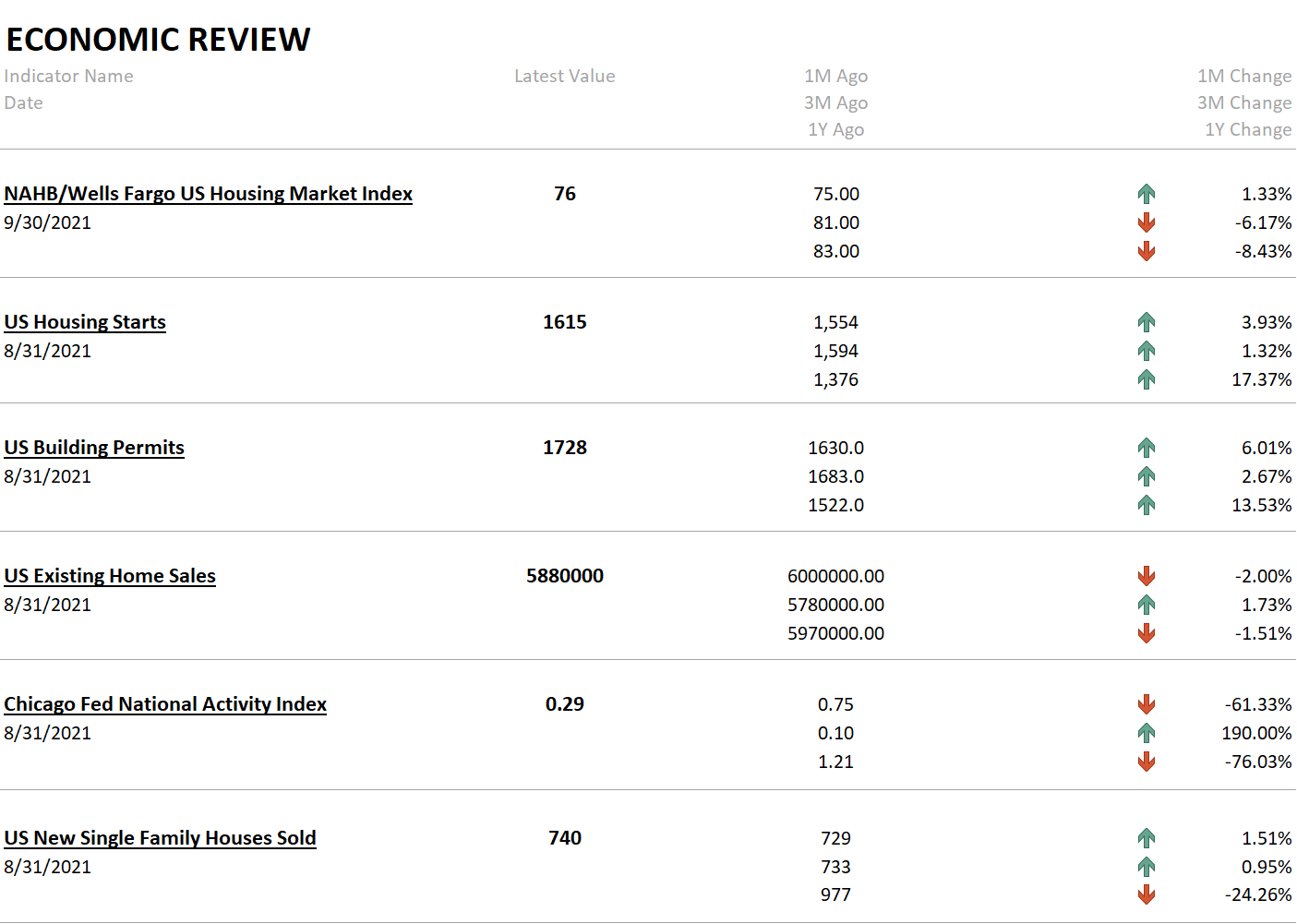 This week’s data includes durable goods, personal income and consumption, the Chicago PMI, and the ISM manufacturing index. I think the two to keep an eye on are income and consumption. It will be interesting to see if either was impacted by the impending end of extended unemployment benefits. 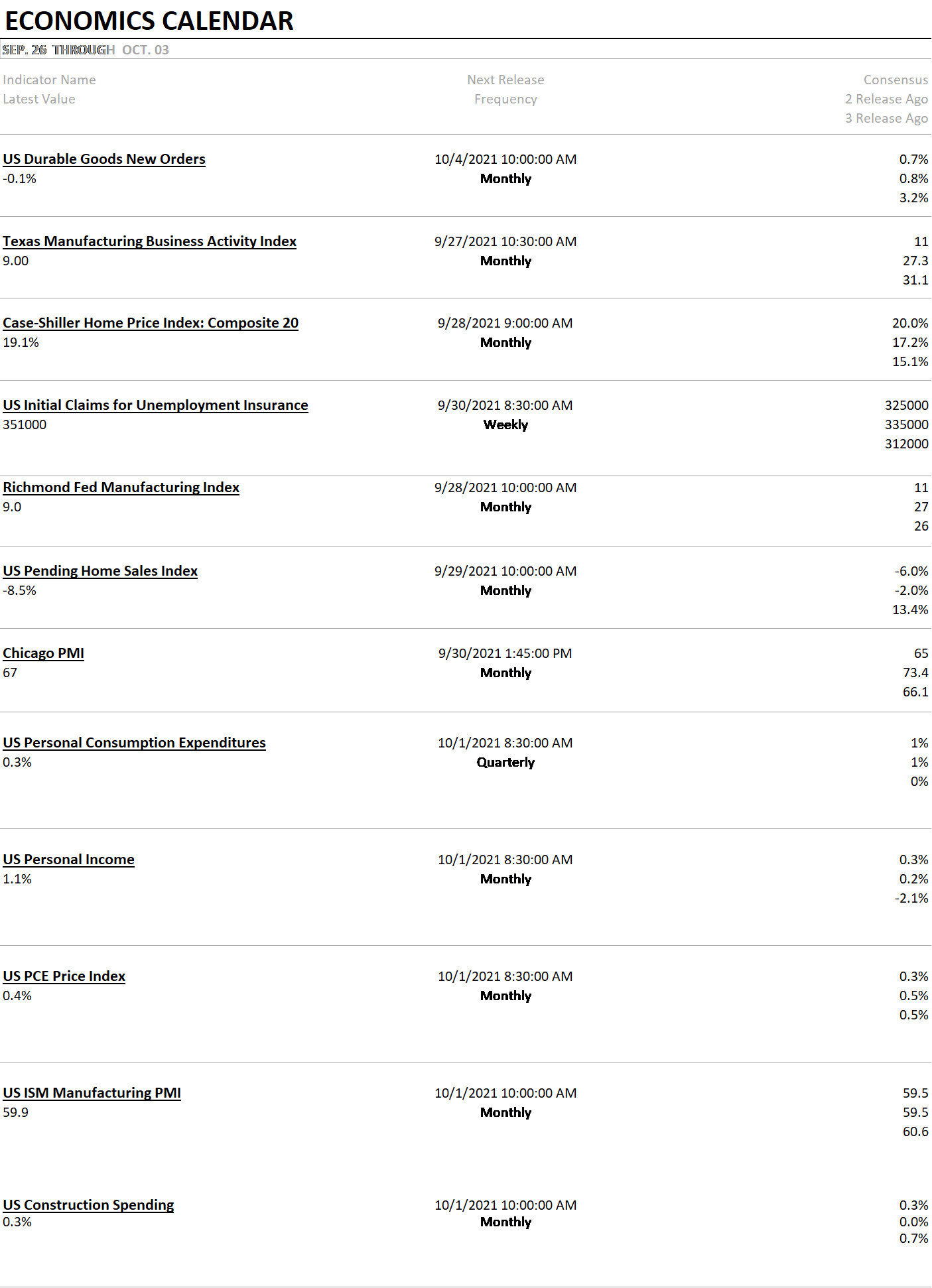 Commodities had a good week which seems curious considering the potential growth impact of Evergrande. But as the title says, maybe it isn’t so Grande. Maybe it is just pequeno.

US and European stocks were up last week while the rest of the world was down. Is that because a China slowdown is good for the US and Europe and bad for Asia and Emerging markets more generally? Maybe but I think I’ll wait for more evidence on that front before making any big pronouncements. 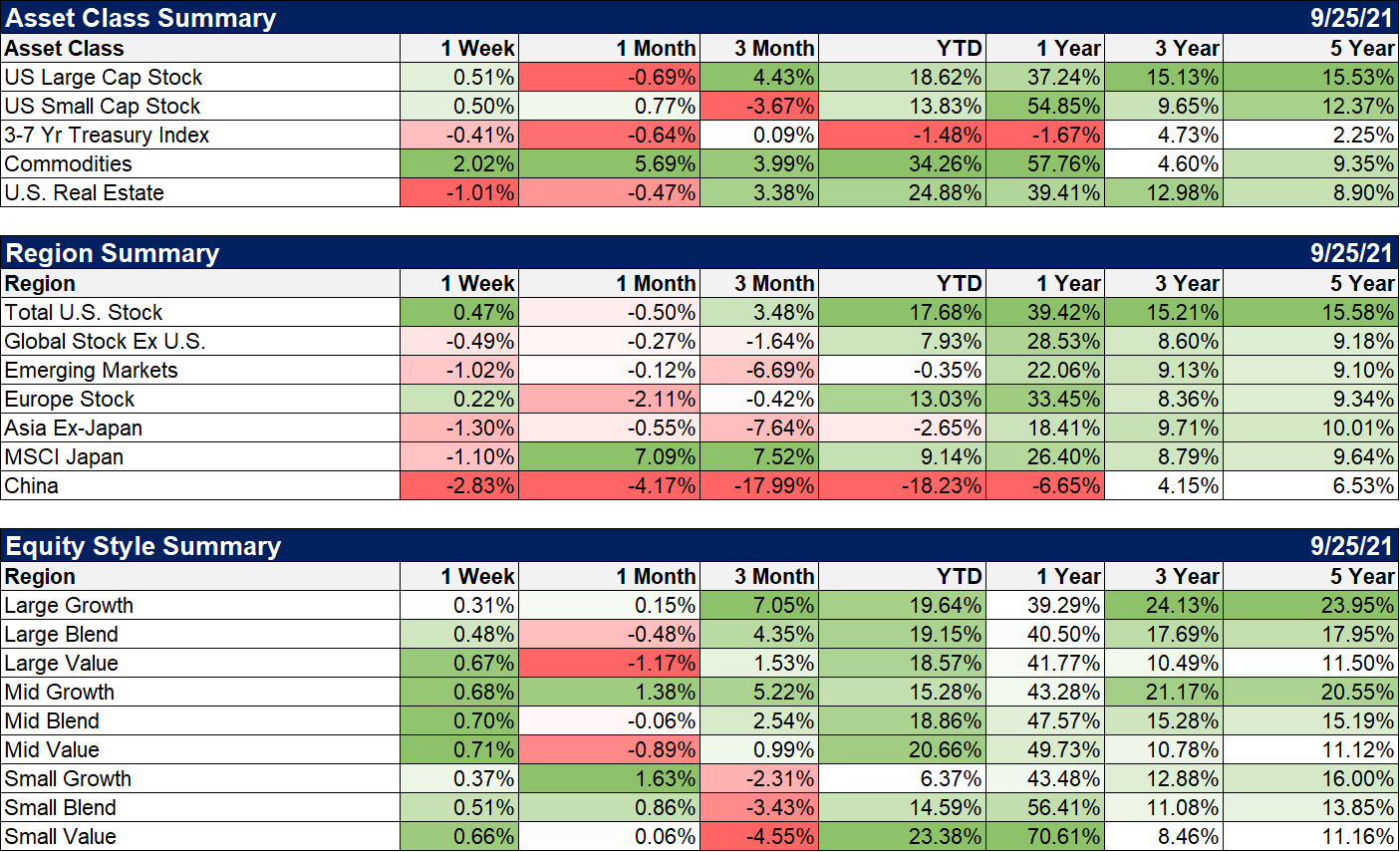 As I said above, financials and energy led last week. Of equal importance I think is that real estate and utilities – both rate-sensitive – lagged the field. If rates keep rising, that seems likely to continue as well. 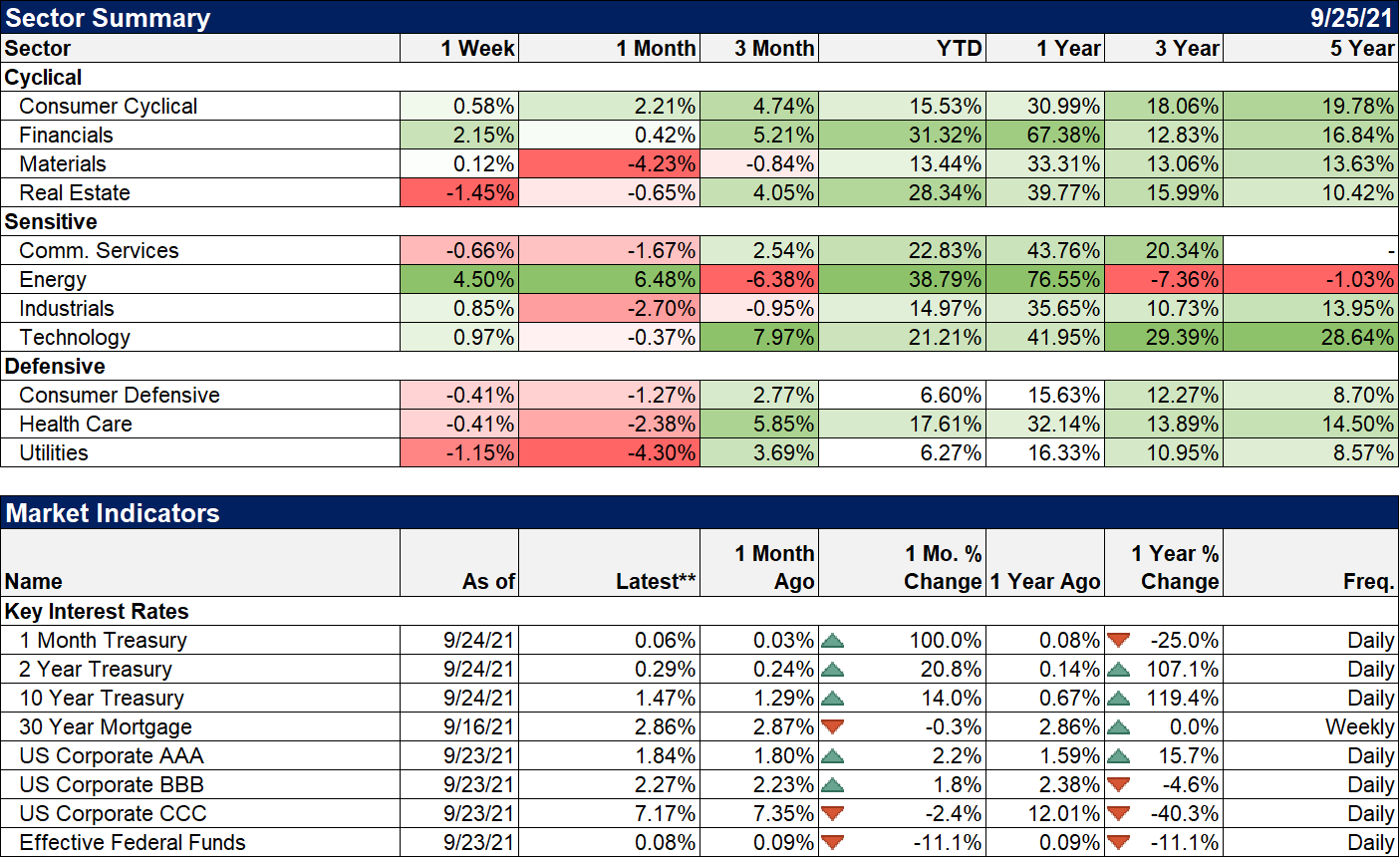 The 10-year Treasury yield bottomed in March 2020 around 40 basis points. It rose and then fell back to about 50 basis points in August of last year. It rose too far, too fast (1.75%) and the last six months has been nothing but a correction of that trend. Now, it appears rates are resuming their rise. How far will they go? Assuming the Delta end/re-re-opening narrative takes hold and there are no surprises along the way – some very large assumptions – my inner trader says about 1.85% as a first target. But that’s just an extrapolation so I wouldn’t place any big bets on it. What most investors should know is that rates are in an uptrend because the economy continues to recover from COVID. We had a growth rate slowdown and so far that’s all it was. And the market says it is ending. I’ll take that over all the breathless Evergrande articles any day. 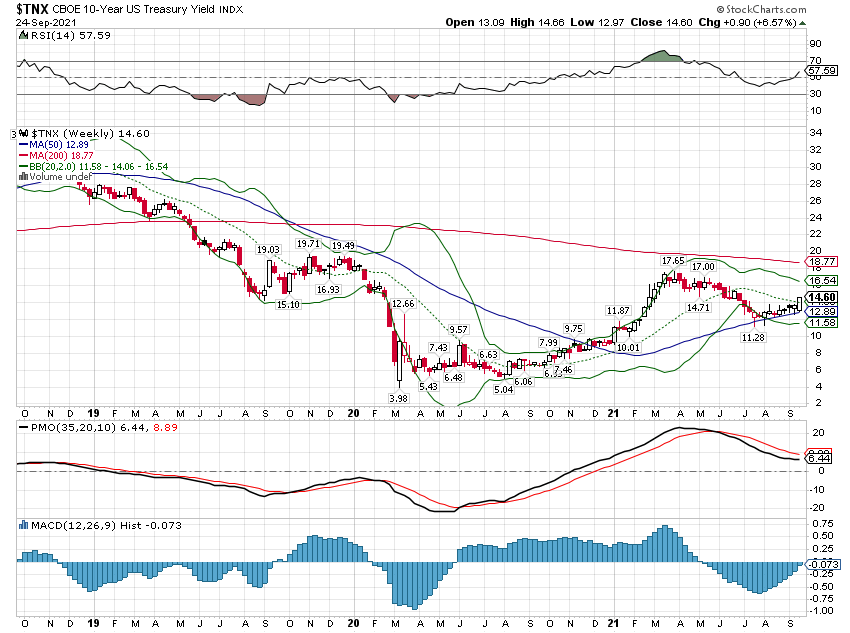