Bonds sold off again last week with the yield on the 10-year Treasury closing over 1.6% for the first time since early June. The yield is now down just 16 basis points from the high of 1.76% set on March 30. But this rise in rates is at least a little different than the fall that preceded it. When nominal rates fell from April through July, real rates fell right along with them. The nominal bond yield fell by 63 basis points and the 10-year TIPS yield fell by 57. That means that the drop was driven by a change in real growth expectations not a change in inflation expectations. But the rebound has not been as uniform, as the nominal rate has risen by 47 basis points while the real rate has only climbed by 27. So, this rise has been driven more by rising inflation expectations than rising real growth expectations, although there has been some of both. But last week’s 14 basis point rise in the nominal rate was all about inflation – TIPS yields were unchanged. The weak employment report last week got all the news but the bond market was focused like a laser on average hourly earnings and the potential that has for inflation. The difference here is not large and inflation expectations at the 10-year time frame are still just 2.5%. That is higher than I’d like but compared to the last 20 years, is not extraordinary.

10-year Breakeven inflation rate and the inverse of the broad dollar index:

I think there is a question though as to the direction of causation. Does a weak dollar create inflation or does inflation cause the dollar weakness? I think we all think back to the end of Bretton Woods and think it must be the former but I’m not at all sure about that. During the Bretton Woods era inflation fluctuated pretty wildly after WWII (10% in 1948) as the Fed held rates low to keep interest costs on the war debt low (sound familiar?). The dollar didn’t move because exchange rates were fixed but if it could it probably would have since the Fed kept rates from doing so. And inflation did rise from roughly 1% in 1965 to over 6% by 1970 and the pressure on the dollar eventually pushed Nixon to break the peg to gold in August of 1971. In any case, the dollar right now remains in a short-term uptrend within a narrow trading range that has persisted for nearly 7 years: 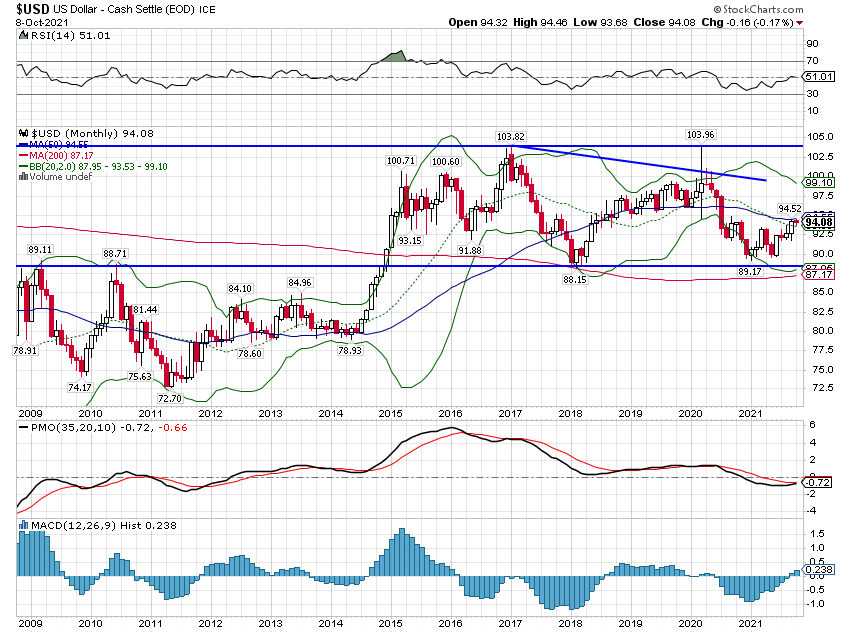 The rise in rates is not confined to the long end of the curve as the 2-year yield is rising too but the long end is rising faster so the yield curve is also steepening. There is still quite a ways to go if the curve is going to steepen to the point it has after the last few recessions:

While a steepening curve is associated with economic recovery, the steepening we’ve seen in past cycles was driven by falling short-term rates rather than rising long-term rates. That is obviously not the case this time but whether that makes a difference is something I don’t know. If the steepening of the curve induces recovery then this is indeed good news. That could be the case if a steeper curve induces more lending by banks but loan demand may be as much a problem as supply.

While the current inflation rate may not be sustainable (if the dollar stays strong) that does not mean the current price hikes will be reversed once the supply chain is cleaned up. Average hourly earnings in the latest employment report were up strongly, 0.6% for the month and 4.6% year-over-year. But real average hourly earnings (after inflation) were not, up just 0.1% for the month and down 1.1% over the last year. Even if this inflation is “transitory”, companies are going to do their best to retain the price hikes of the last year. Commodity prices should be an exception but environmental policies are making that less likely. The push for net-zero emissions from traditional energy companies means they aren’t investing to discover new reserves. Banks have been pressured to not lend to fossil fuel companies and the Fed is being pressured to make that more than a suggestion through capital requirements. That is the obvious implication of adding a climate mission to central banks’ remit. There’s a reason oil and natural gas prices are where they are and I do not expect the supply side to get better anytime soon. And reducing demand isn’t merely a matter of building more windmills and solar farms as Europe and the UK have discovered to their citizens’ dismay.

The employment report released last week was obviously not what everyone wanted but I wouldn’t put a lot of emphasis on it. The August figure that was so disappointing last month was revised higher by 131,000 and I wouldn’t be surprised in the least if that keeps getting revised higher. As for the September figures, I don’t think the end of the extended and enhanced unemployment benefits was fully reflected. The survey for this report was conducted just a week after the benefits ended. Let’s see how it looks in October and how the September figures are revised. I, for one, have no idea whether the end of those benefits will have a large impact. What I do know is that the labor market is changing significantly and it isn’t over by a long shot. And we have no idea whether these changes will prove beneficial or detrimental to the economy or society as a whole.

The inflation we see today is a consequence of past policy choices but I don’t mean, necessarily, monetary policy. Our response to this pandemic was straight out of the demand-side recession playbook. Unfortunately, it wasn’t a demand-led recession but rather a supply shock (mostly). It should not be surprising that prices are rising. Stimulating demand before the supply side recovered was a recipe for disaster and here we are. I suppose the pandemic response may have reduced the pain of the recession and it may have even reduced the depth of the economic loss. But there are no free lunches in this world and the cost will be measured in the recovery. We entered the pandemic with a trend growth rate of 2.2% over the previous decade. Higher prices and a large addition to our debt load point to a future trend growth rate that is even lower.

Whether that scenario comes true or not depends on a lot of factors that we can’t predict so it isn’t inevitable. In fact, I think there are hints that pandemic-induced changes may well prove economically beneficial. The future is, as always, unknowable but it is surely going to be interesting.

For now, because the rise in rates is being driven more by inflation fears than growth hopes, I will not change my characterization of the current economic environment. We are still in a slowing growth, rising dollar environment:

Despite the disappointing employment report the economic news last week was actually pretty good. Exports and imports were both up, although exports are still lagging imports. The ISM services index was better than last month and than expected. It may be that the Delta slowdown in services spending is coming to an end. 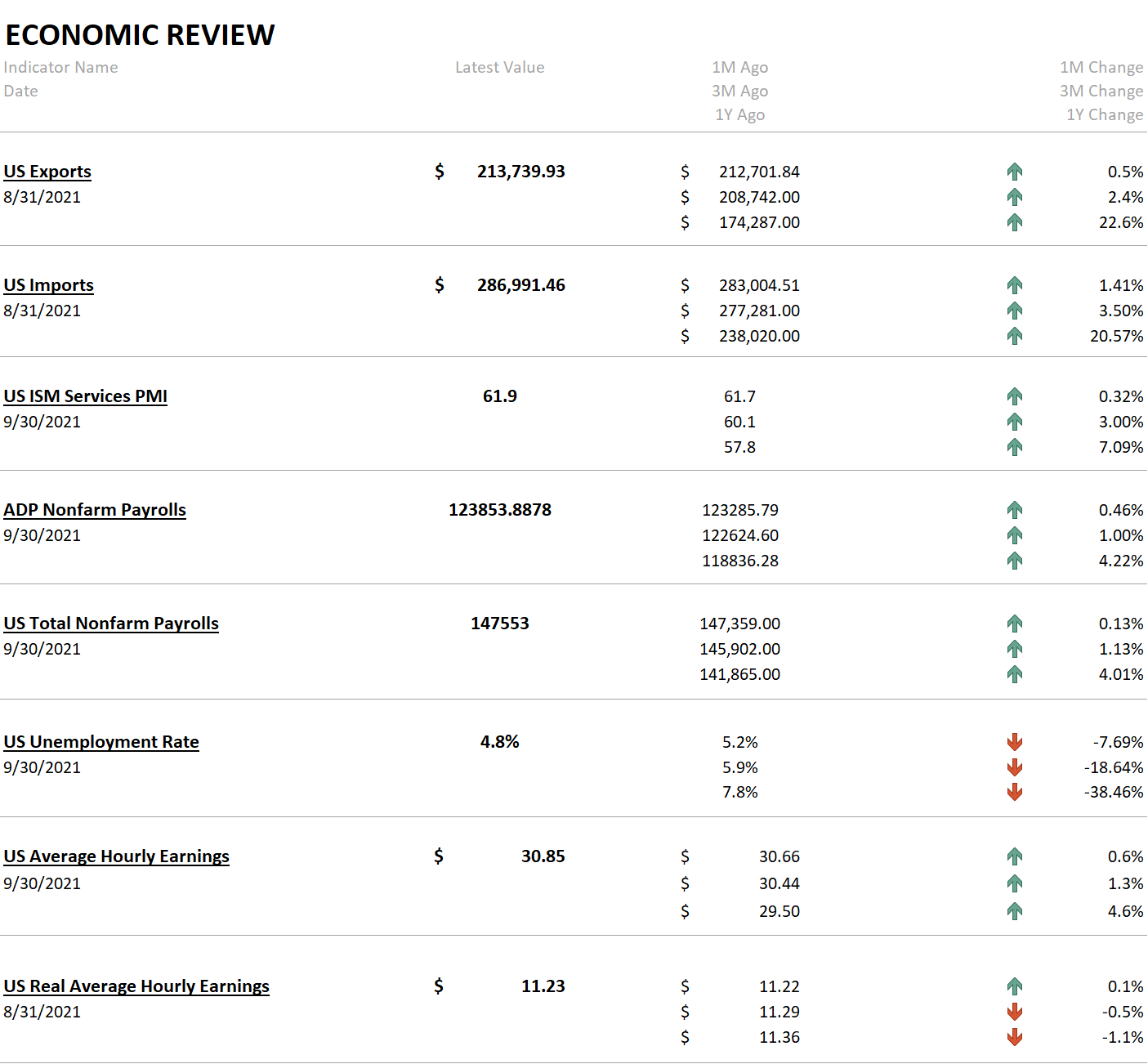 It’s a pretty big week for data with more information on the labor market via the JOLTS reports and a slew of inflation indicators. We also get a preliminary look at Consumer Sentiment which has not been all that positive recently. 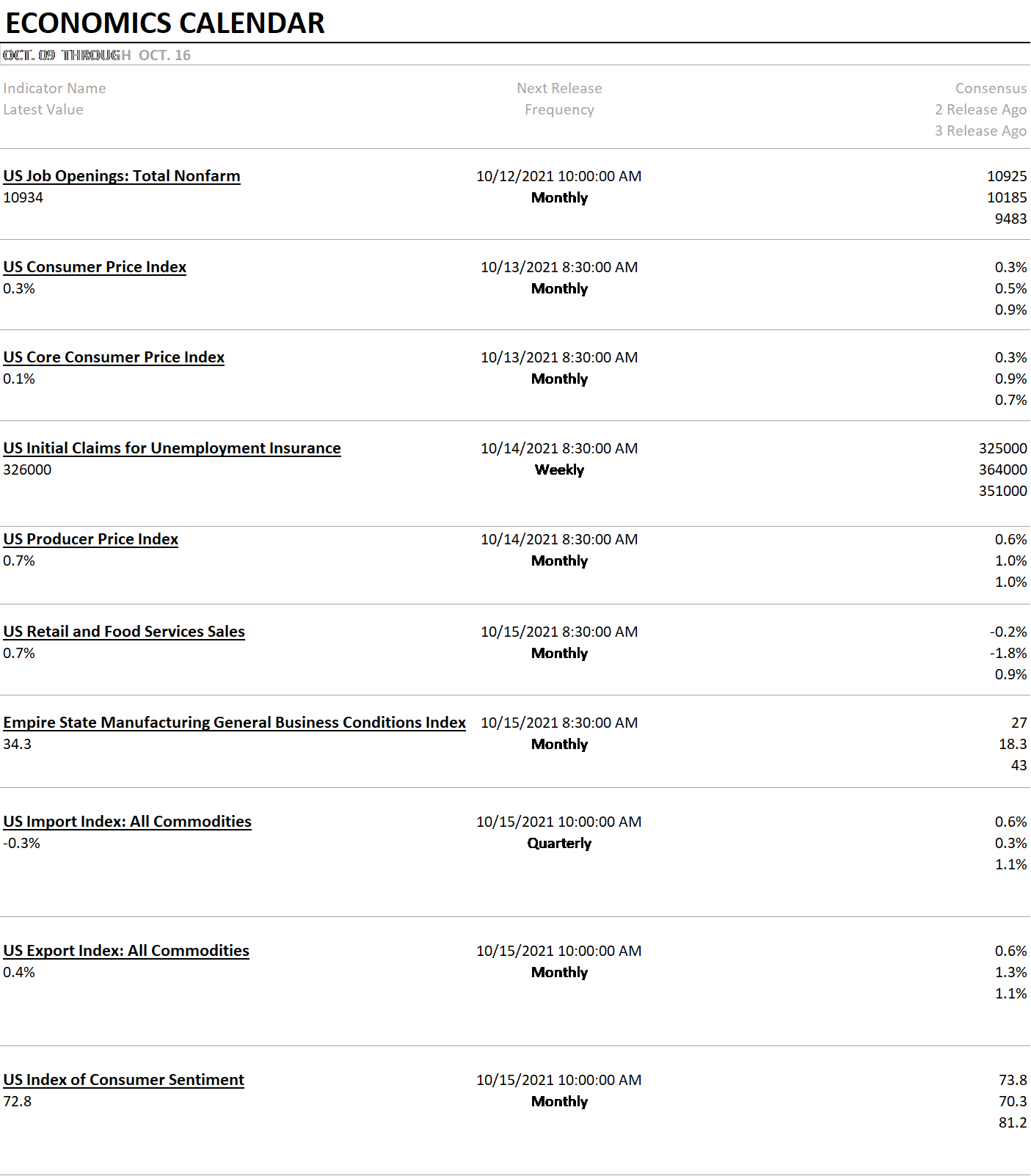 The value indexes though did perform well last week, especially at the small and mid-cap levels. 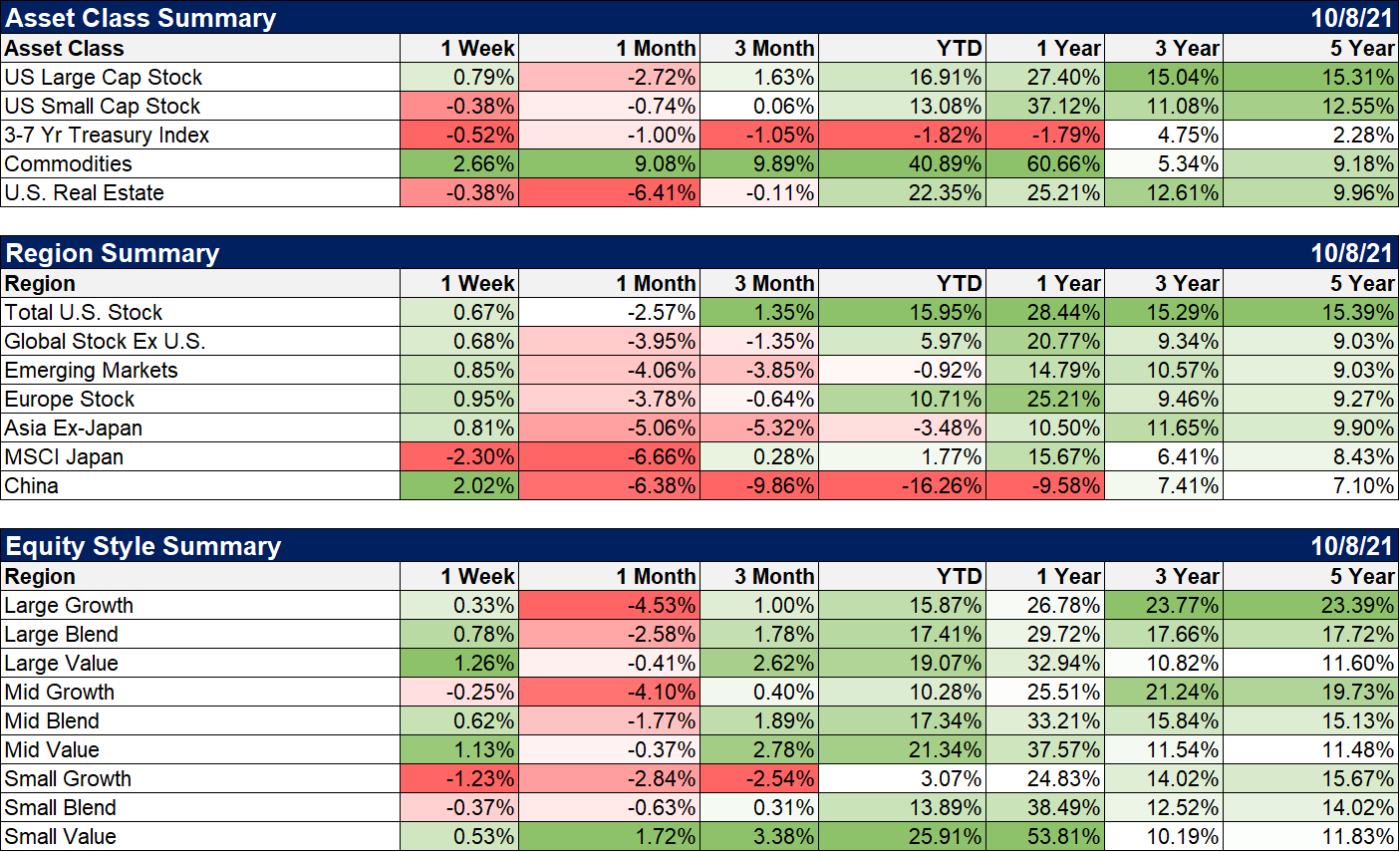 Value outperformed because those indexes are dominated by financial and energy both of which did extremely well in last week’s environment. Even after a huge rally this year, energy is still down over the last 3 years and barely positive over 5. There is probably a long way to go on that front if demand holds up. 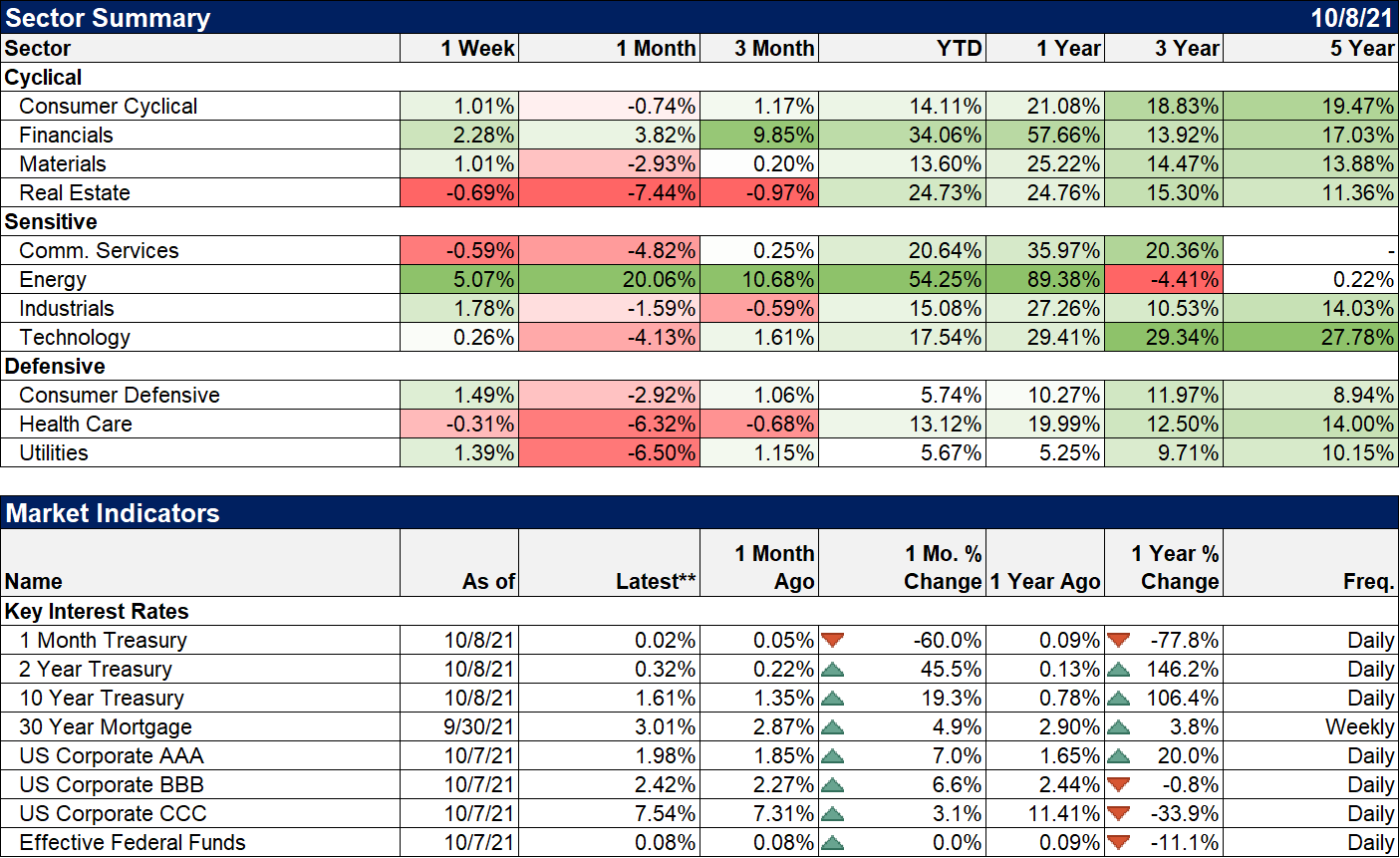 Rates are on the rise mainly due to inflation fears but that could just be temporary. Changes in TIPS yields and nominal yields are often mismatched. We saw a similar dynamic in the previous rate rise from August to December last year. Eventually, TIPS yields turned higher too and both peaked at about the same time. So, don’t get too excited about inflation or growth fears just yet. The inflation is obvious to everyone but any gains in growth seem to be still prospective. And it may be that we will need to see inflation fears fade before TIPS yields join the party. But I don’t think this business cycle is anywhere close to done so just be patient.