The (less) Dollars Behind Xi’s Shanghai of Shanghai

The (less) Dollars Behind Xi’s Shanghai of Shanghai

What everyone is saying, because it’s convenient, is that China’s zero-COVID policies are going to harm the economy. No. Economic harm of the past is the reason for the zero-COVID policies. As I showed yesterday, the cracking down didn’t just show up around 2020, begun right out in the open years beforehand, born from the scattering ashes of globally synchronized growth.

Xi Jinping saw how a very different post-2008 global economy without any recovery was going to keep China from living all the way up to Deng Xiaoping’s grand promise of total Chinese prosperity (borrowing heavily from its capitalism undercurrent). Rather than sit around waiting to be Gorbachev-ed, he gave himself the crown of dictator and has ruled with an increasingly harsh iron fist ever since. 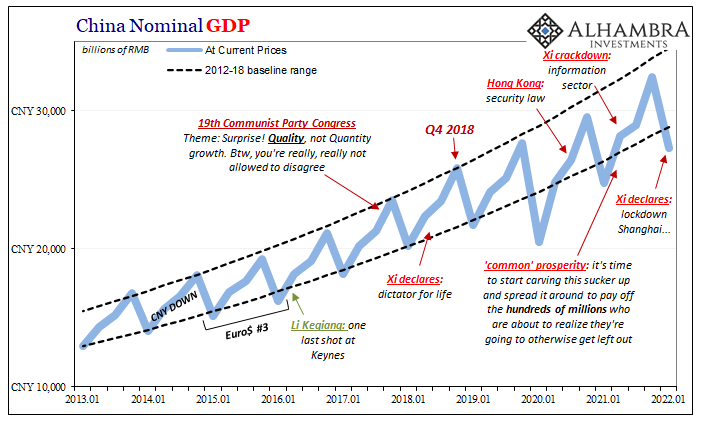 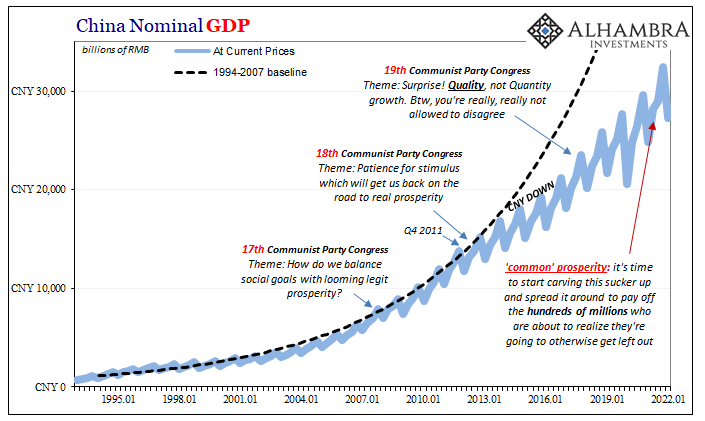 His main point: the (global) economy is going to do what the economy is going to do. Everyone should’ve learned this by now, but…mainstream media. There’s no sense trying to fix what is well outside his (or anyone’s) current control. Instead, deal with the likely consequences, though not once they arise but anticipating them before they ever do.

Thus, prioritize this messaging – occasionally by action, as in Hong Kong now Shanghai – over any sort of conventional policy rescue Xi knows is doomed from the start. China loved Keynes after 2008, was a bit less enthusiastic around 2012, gave it one last try in 2016.

Managed decline from then on.

You have to wonder if Xi ordered the PBOC to essentially sit on its hands. After all, right now he’s handling the current bout of weakness his way rather than any Western textbook way; that is, Jinping the Pooh has shanghaied Shanghai.

In lieu of anything different or novel, Chinese policymakers instead cut the RRR again last Friday (effective next week). Maybe another drop to the MLF tomorrow therefore LPR. As we know around here, the RRR is actually more of a warning.

Reducing it is a tacit prediction of impending monetary restraint, either internal or external; more specifically, external becoming internal. Fewer (euro)dollars, less PBOC balance sheet (forex), therefore without Xi’s permission bank reserves get cut just like they have been for going on eight years now. 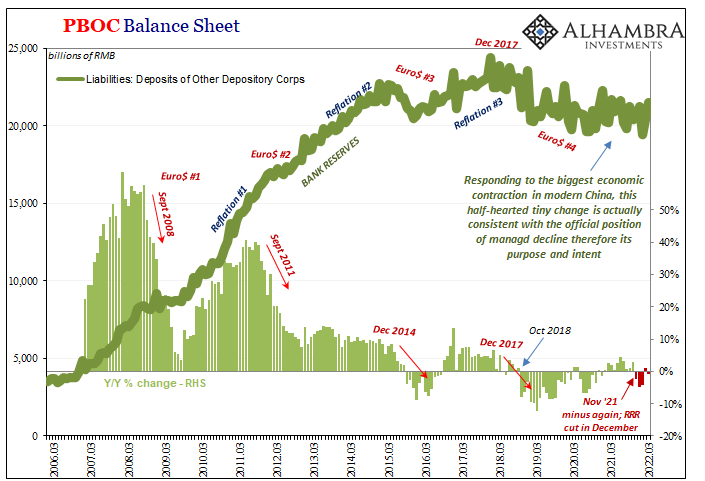 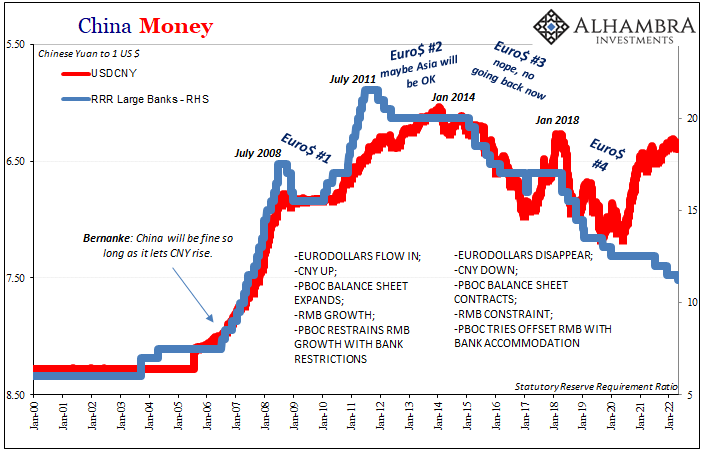 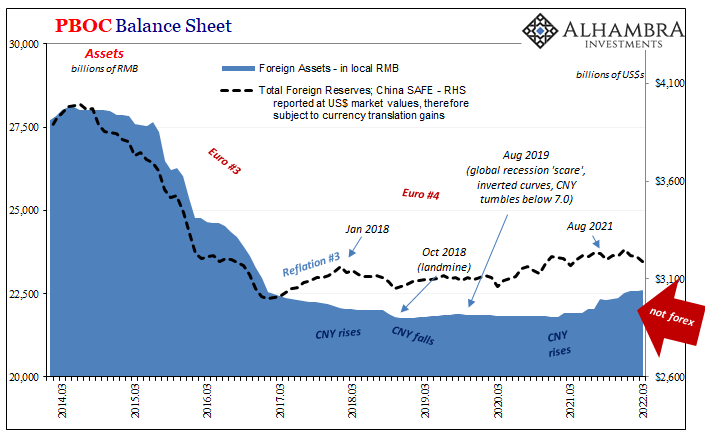 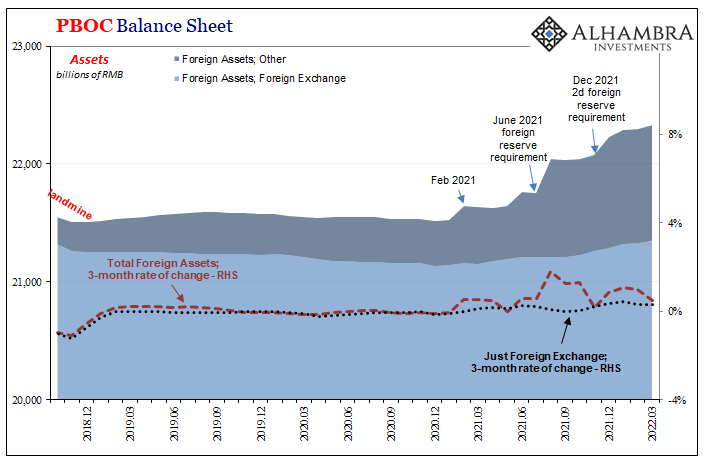 A lower RRR theoretically allows China’s big banks to use more of what they already hold, leaving it up to the banking system to maintain the nation’s interbank liquidity profile out of the hands of policymakers. This passive strategy is consistent with Xi’s managed decline mandate which seeks only to maintain stability (a word that has been frequently, almost obnoxiously thrown around by officials at every level) as much as possible.

We’ve covered the big factors about what’s behind these developments several times recently, starting with a merchandise trade surplus so massive it boggles the imagination. For all the “dollars” supposedly flooding China’s way from this, none of them end up where they should – both the PBOC’s balance sheet like SAFE’s reported holdings.

The only way to reconcile is via smaller maybe even reversing financial flows; for every (euro)dollar China gains through trade, one perhaps more than one disappears through these other means.

What we notice of CNY, in particular, is its two recent phases pointing us toward that conclusion: between May 2020 and January 2021, rising merchandise surplus to go with modestly reflationary financial flows therefore CNY’s near-unbroken ascent against the dollar. 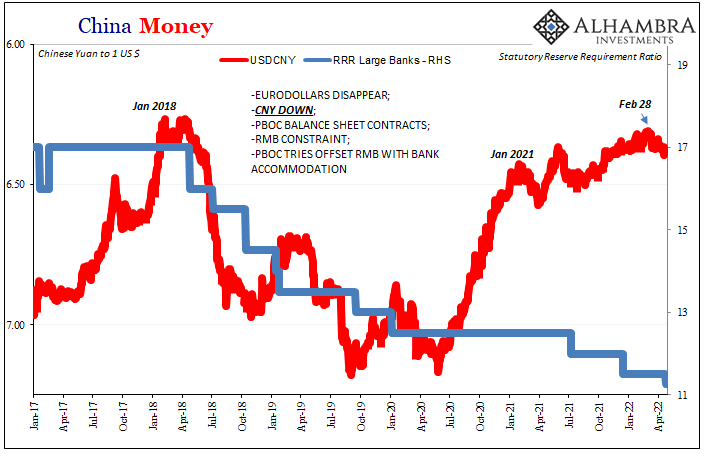 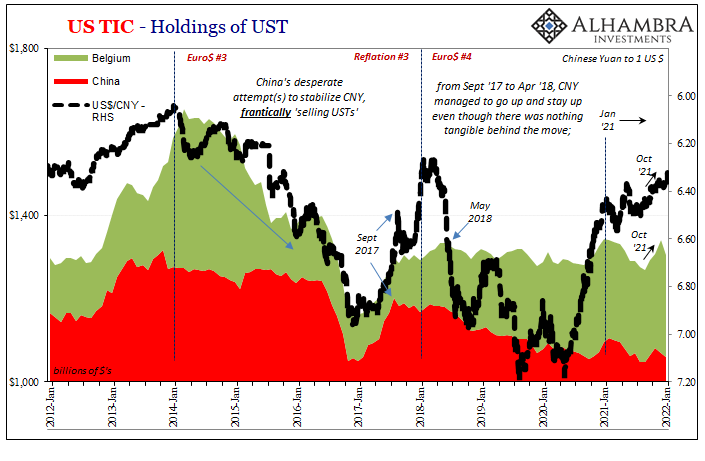 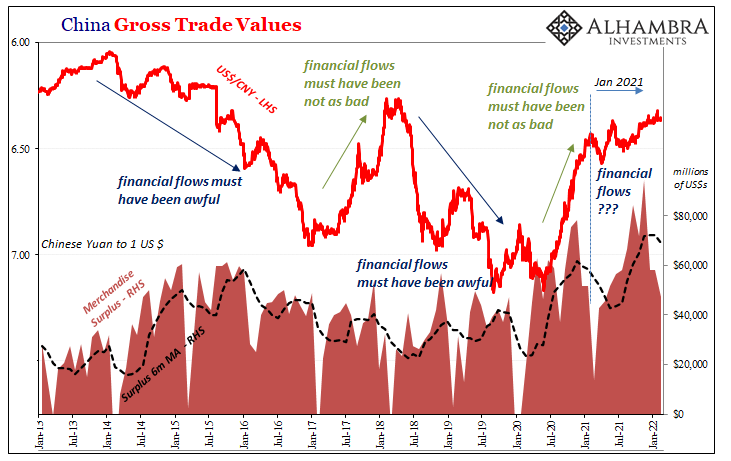 Something, however, changed last January; not just in terms of CNY, also any number of other eurodollar indications such as what we find from US TIC. Thus, whatever might be going on with the PBOC, TIC plus RRR equaled financial outflow to some substantial degree offsetting the historic trade inflows.

Therefore, this second phase had meant despite an even greater merchandise surplus, CNY, while still moving upward, it did so at a noticeably slower pace and to a much smaller degree. During this stage, another nod to these opaque, shadow financial/monetary difficulties, the first RRR cuts of this current downturn “cycle.”

Given another, albeit smaller RRR to be effective on April 25, we can’t help but note CNY’s more recent trend – down – along with the timing for when it began. 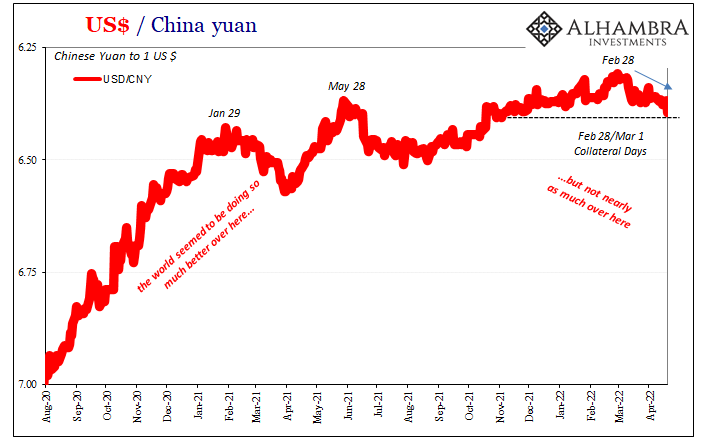 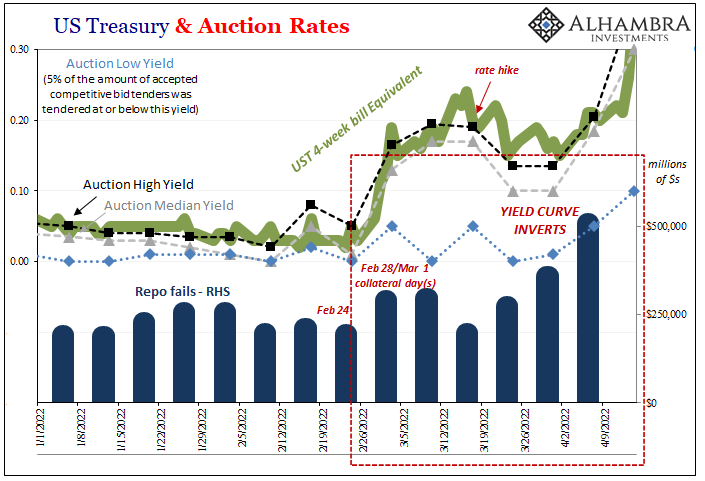 Those just so happen to be our most recent collateral days, the aftermath of which I showed in all its gory detail if only made visible by the US T-bill market stressing what must’ve been enormous global money stress (collateral scarcity became shortage maybe even a sizable run).

In other words, CNY has made its first sustained reverse (nearing two months) since June last year; again, this in spite of another huge trade surplus in March. So, what might China be saying through these actions about expectations for money like trade flows moving forward?

RRR’s are a warning, and this one uncorked right in the window of exactly what it is RRR’s always warn about.

In other words, “stepped up support” for currency means reducing the reserve assets on the PBOC’s balance sheet (or, if you like, selling UST’s). Simple accounting requires either the PBOC to offset those losses with RMB program lending (which tends to be CNY negative), or to further shrink its liability side to match. Guess which one the central bank has chosen the past two years.