This must be what the NBER feels like. That group of academic Economists simply took up the job of “declaring” each end of the business cycle. No one seems to have asked them to, nor was there any mandate official or otherwise. Sensing the opportunity, believing the job in keeping with the organization’s competence, or self-assessment of it, the NBER issues national recession edicts and everyone in America just rolls with them.

I’ve done much the same for years when it comes to the more important and relevant eurodollar “cycles.” Rather than the narrow back and forth of one individual country’s economy, these other broader monetary ups and downs have corresponded with global (synchronized) business peaks and troughs – sometimes it has meant recession (and worse) in parts of the world, even if not strictly the US (which can’t completely escape).

Never recovery, though. Another unnecessary constraint on the NBER’s discourse is this assumption of a binary; America’s or any economy is either in recession or recovering/booming. Not so; since the eruption of the first eurodollar event in 2007, back and forth only ever between some kind of slowdown or recession and at most reflation (neither contraction nor true growth).

I spent last year wondering if I could ever call the rebound from 2020’s recession “reflation” at all. It was the least inspiring, at least outside of consumer prices. This other, however, merely created confusion in the public, understandably mistaking supply imbalances for actual inflation when a broad and honest survey of money then economy (apart from US goods) showed it barely reflating.

Then, even that turned. Fedwire first in February 2021, before “something” further changed/broke (as repeatedly pointed out) around April especially May.

Like the NBER, with the benefit of more hindsight, there’s sufficient data in hand. Not that anyone will care, rather since no one else will do this, I’ve dated Reflation #4 (barely qualified) peaking sometime last May. Ever since, more and more Euro$ #5 as well as more and more evidence pointing solely at it.

Let’s start with the dollar’s exchange value. For most people this means DXY, and DXY means euro. Conventional (incorrect) theory assigns interest rate differentials or something as the cause for the euro’s movements against the dollar.

Sometimes yes, most other times eurodollar. 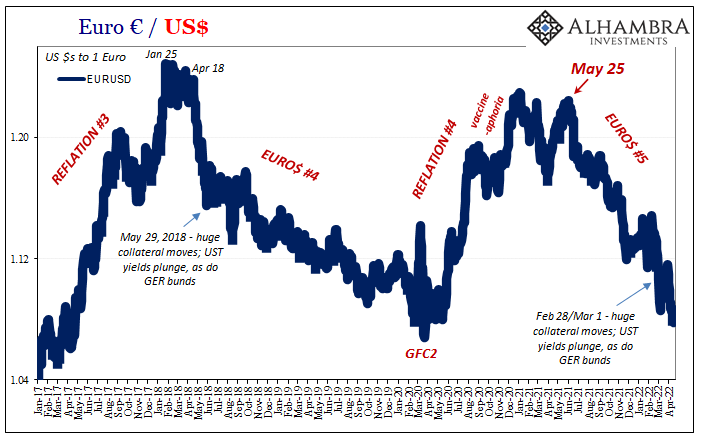 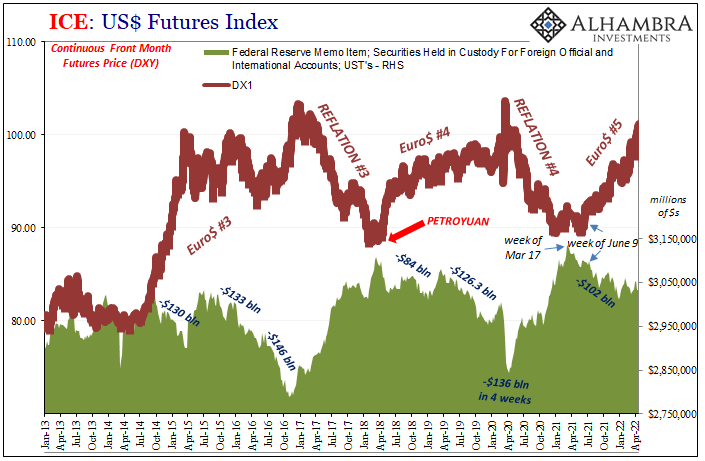 The euro’s exchange value topped out last May 25. So far, so good (as in bad). Since EUR is such a huge part of DXY, this dollar index bottomed out also on May 25. But as you can see on the chart immediately above, there’s more to the story beyond Europe’s common currency, one that, given the data on that chart, has something to do with foreign holdings of Treasuries.

Those have dependably disappeared when a global dollar shortage (previous Euro$ #n’s) develops; either for reserve managers selling them outright, as in March 2020, or as some kind of contingent liability perhaps even collateral for collateral swaps in light of eruptions of private eurodollar revaluation and perhaps rejection of other, lesser quality collateral forms.

While the euro has indeed been a big mover relative to other currencies, this doesn’t mean the dollar’s rise and its alarming signal end there. On the contrary, the rising dollar has been far more widespread. Not just in terms of the “wrong” direction, more importantly the case for timing. 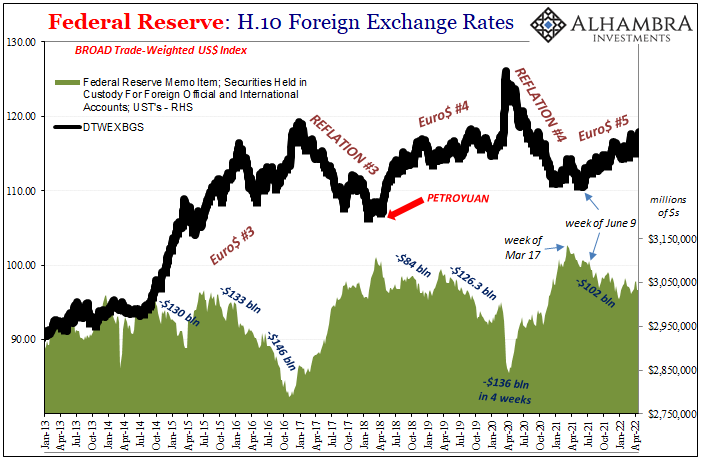 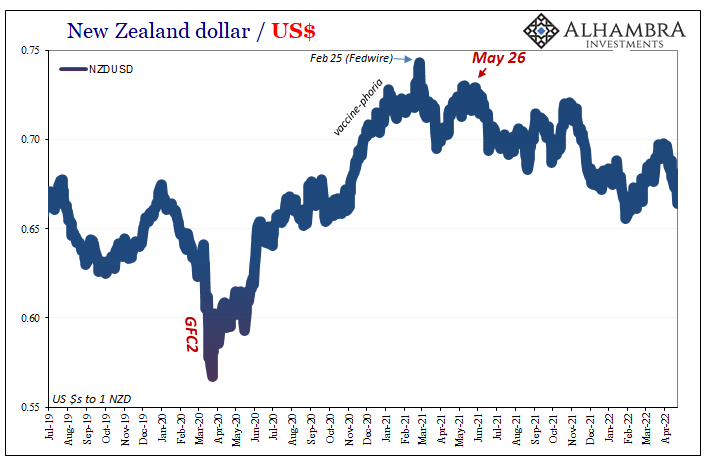 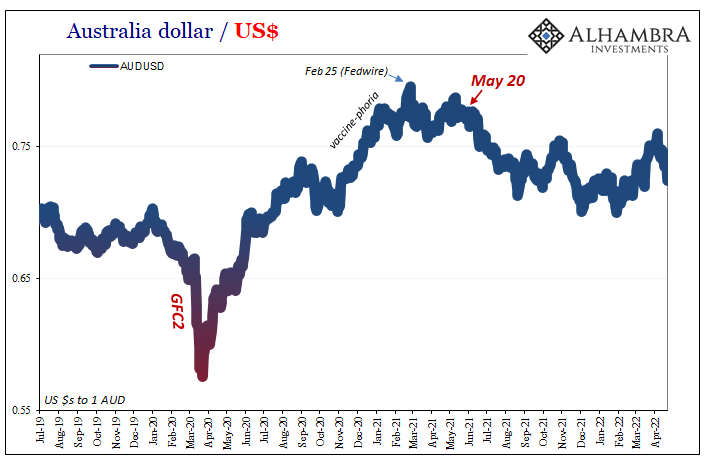 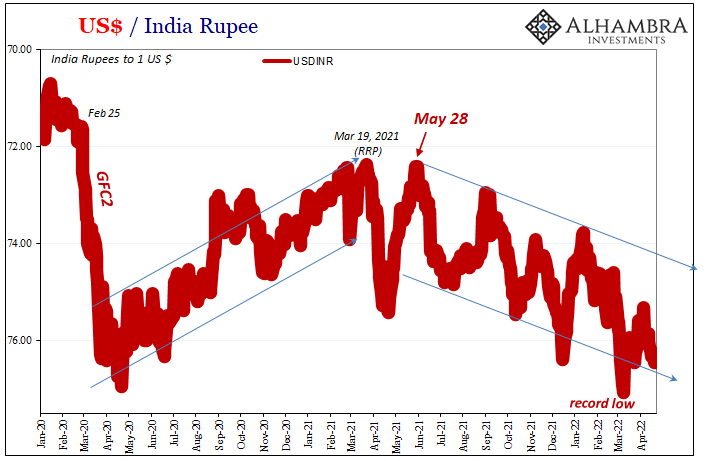 All of these also indicate something important about US consumer prices. Those surged beginning last March (Uncle Sam), then hit a lull, of sorts, during summertime (when the dollar started to rise) but then truly accelerated during October. It was the same in Europe, too.

Yet, the dollar’s exchange value across a number of currencies, important ones, has been largely set in this contrary direction (it should be noted that currency crosses with especially commodity-heavy nations like Brazil have bucked, pun intended, this trend, suggesting that supply shock commodity pricing might offer those few some shelter from this Euro$ #5).

Of course, it’s never just the one thing or another. Whereas the NBER typically relies on a series of key economic accounts, I do the same only in financial prices and markets. The dollar is one, swaps, eurodollar futures, etc. Repo. And, as always, the yield curve. 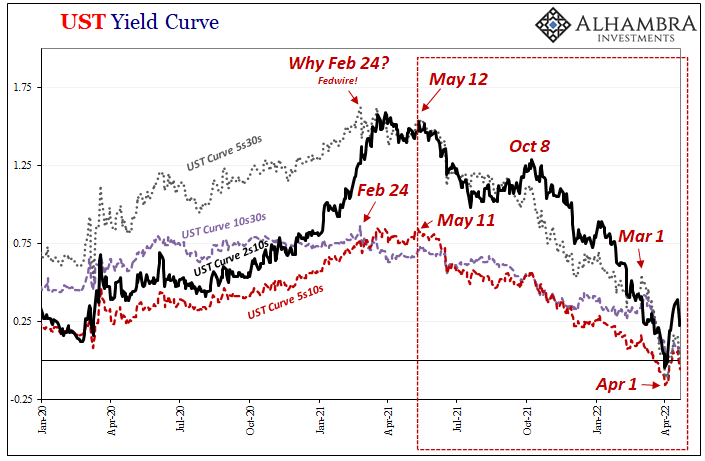 Perhaps the one big element missing from any previous declarative statement about a potential systemic turn toward Euro$ #5 would have been China and CNY. The Chinese currency had previously been an important, simple, and very clear demarcation between global reflation and the next dollar shortage stage.

This was absolutely the case for Euro$ #3, with CNY confusing everyone by turning downward right from the start of 2014 (Bernanke and Yellen really should’ve paid attention). Then Euro$ #4, January 2018 it stops its mighty phoenix-like resurrection and then April 2018 sinks like a stone.

While CNY was tanking at that time, May 29 collateral day, eurodollar futures inversion, the UST 7s10s almost invert, etc.

Last year, however, CNY only bent. Like it had in 2017, up to last January the yuan seemed unstoppable (a solid enough reflation signal). Rather than reverse in February with Fedwire et al, the exchange value to the dollar kept going up if at a much smaller angle.

Some of those ups and downs in between match the results above, a sharp drop in CNY in June, for example, but never consistently.

Whereas quite a lot pointed to Euro$ #5 along the way, after May there were further serious and wrong turns early October, CNY held out until the end of February. It seems like “something” really might’ve changed since. 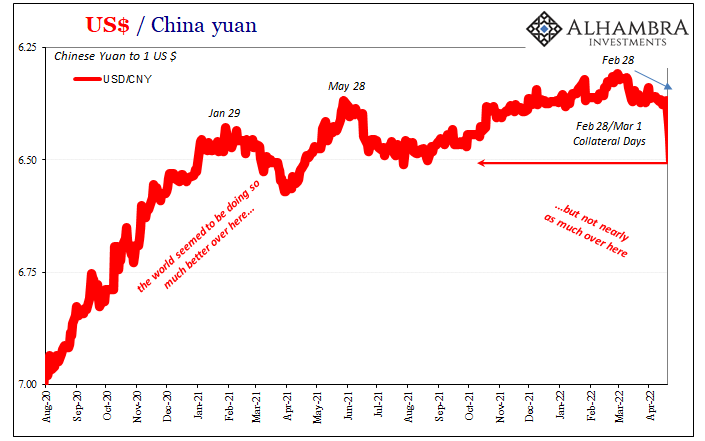 Not only does this make nearly two months pretty steady falling down (CNY DOWN, and you know that means!), over the past three days the drop has accelerated beyond anything in quite some time.

Given the operating environment elsewhere around eurodollar-world, if there had been any doubts about Euro$ #5 (and that was never really the question, dollar shortage was pretty well established, rather it was always, in my view, whether or not there had ever been a Reflation #4!) they’ve been erased if not now obliterated.

So, I’m calling it. Like the NBER’s declarations, long after the fact and inflection, I’ve dated Euro$ #5.