Demand Down, Supply Down, Ugly Up

Demand Down, Supply Down, Ugly Up

Well, that was a mess. The Richmond Fed’s Manufacturing Survey was at first released before being taken back. Initially reported as a plunge in the headline number, it was quickly scrapped once the statisticians remembered they had just discontinued their average workweek component – but had kept a zero in its place when tallying the overall PMI.

With it, the PMI was originally calculated to have gone from bad in May (-9) to horrible in June (-19). Refiguring the whole thing for what today are now fewer inputs, the good folks in Richmond confidently say the corrected number is “merely” -11.

It wasn’t the case, however, where it counts the most going forward. As always, new orders. Unaffected by the litany of bad computations above, Richmond’s New Orders index actually did collapse – and from an already-awful level in May.

These June figures took last month’s worst-in-our-survey -16 and dropped another ten from it for this month; a blatantly recession-is-here -26 and right off my chart (third one below, following first a corrected-Dallas Fed from yesterday – Richmond isn’t the only place for mistakes – which wasn’t updated to the way-worse June estimate). 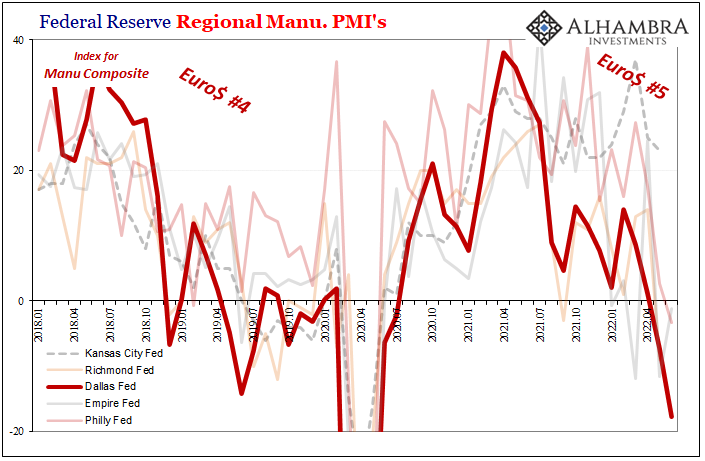 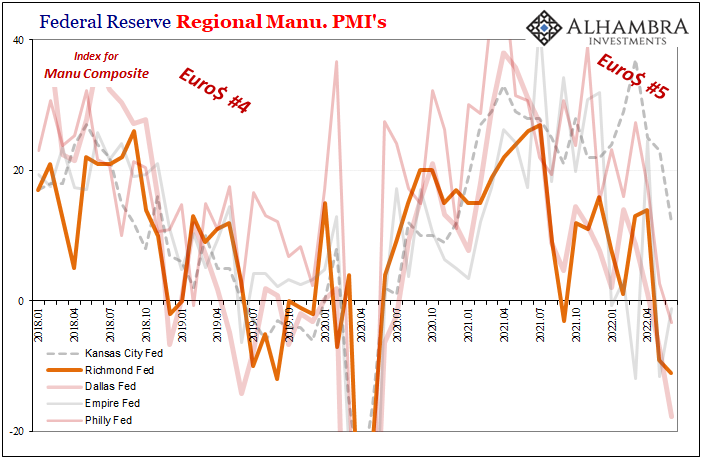 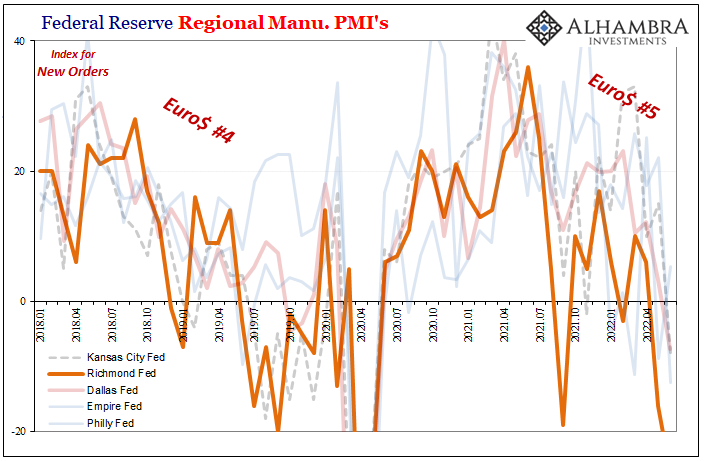 As a result of all these changes and newly issued estimates, the headline average for the five surveys we follow sunk to -4.2. It’s only going to get much worse from here given forward-looking orders, with an average for those across the quintet a decidedly atrocious -9.7.

That’s significantly less than at any point during the lead-up to 2019’s pre-COVID downturn/likely recession, and is a level equivalent to past recessions in the database.

We also have to take note of the pace for the decline here. 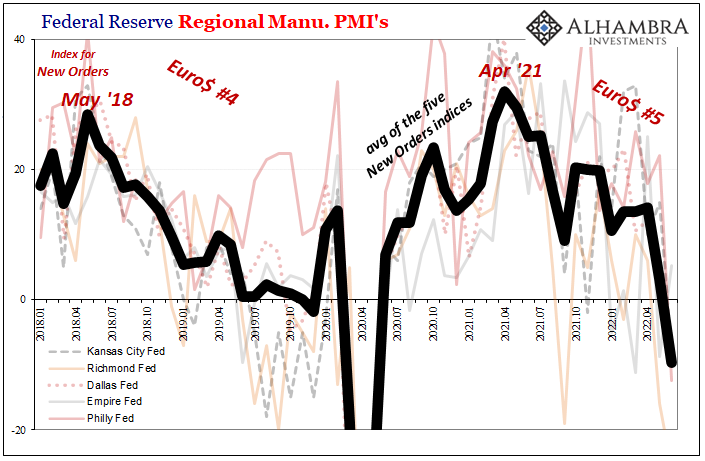 But it’s not just production nor inventory. As I wrote yesterday after the Fed’s Dallas branch had served up the ugly (and there’s more today; I’ll get to Dallas services later):

It’s not just the flood of never-ending inventory. That’s a huge and growing problem, sure, as the chickens of last year’s short-termism overordering finally come home to their retailer roost. Being stuck with too many goods isn’t necessarily fatal to the global and domestic manufacturing sectors.

The scale of the burden is one key worry, though equally so is demand. When the orders were placed during last year, companies appear to have fully bought into (literally) the permanent plateau of fiscal prosperity brought about by repeated war-scale government interventions. They never questioned the current nor future state of the American consumer, laser-focused instead on supply problems exclusively.

We’ve already seen consumer confidence plummet from the University of Michigan’s poll, as well as the one produced by IBD/TIPP. The lone outlier had been the Conference Board’s, for whatever reason(s).

The Board just released its figure for June and, as you can see, it’s no longer holding up so well. While still not nearly as dire as pictured in the other surveys, the direction and more and more its lower and lower levels are corroborating such widespread deterioration.

Deterioration where? The demand side; turning into the perfect storm of not-good goods. 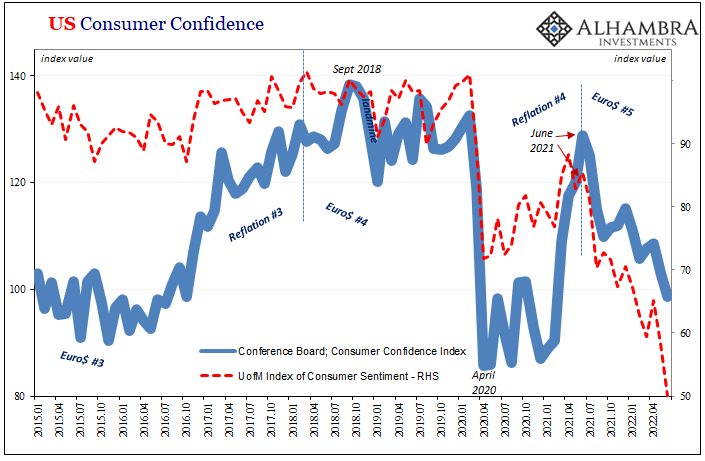 Markets have been pricing a U-turn for Jay Powell most of this year, and eurodollar futures since December last year, even as Chairman Powell has become the most “hawkish” rate-hiker since the “maestro” made his name (riding the coattails of eurodollars). Curves have not only remained adamant about a “policy pivot” even as the FOMC very loudly proclaimed the balance tipped toward consumer prices, they’ve also grown more certain he’ll turnaround this year despite so much official noise and fury otherwise.

This isn’t some modest macro downgrade; no garden variety slowdown would cause a wholesale (pun intended) change from ultra-hawk to rate-cutting and do it in a matter of just months! It’s not just recession what’s being served up and predicted, as more and more data confirms on both sides, supply and demand, it’s looking really nasty from here on.

While the rest of the world only now begins to make peace with recession, we’ve seen it coming the whole way. And now what we see from here is…even worse.