As gold established price behavior based on forward rate movements in 2013, it is clear that the ebb of each successive wave of collateral selling was met with less intensity on the price upswing. There are a number of reasons for that, including the price volatility on the downside and central banks conspiring to convince markets that “tail risks” are anachronistic in this activist age. No matter what the reasons, the governing dynamics have not really much changed. 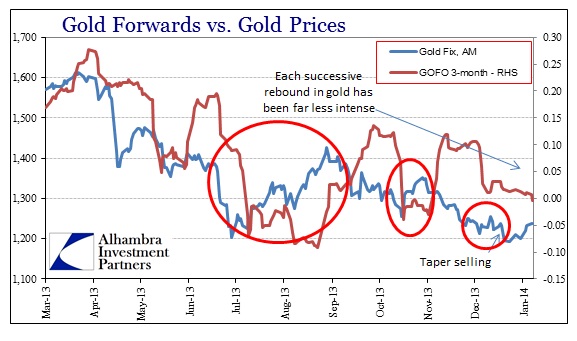 What 2013 showed was a financial weakness related to QE in the US and Basel III particularly in Europe. High quality collateral is at a premium and there are rolling and discrete episodes where that becomes problematic in secondary markets like gold. In a lot of ways that recalls the price behavior of gold in the late 1980’s and 1990’s as the prevalence of gold leasing suppressed gold prices. The key difference now is that there is less unencumbered physical metal to satisfy financial needs for collateralized cash borrowing.

As is always the case, gold leasing at such favorable rates dislodges a large amount of gold supply. In the case of one of the largest non-central bank depositories, the ETF GLD, the fund has disgorged 40% of its holdings since February. 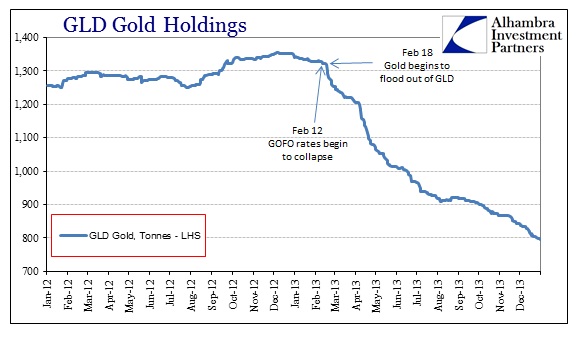 That it coincided with changes in the rate structure of gold forward rates is not surprising given the linkages in leasing/collateralized borrowing. That paradigm shift has given rise to the calls for the gold bull’s demise. And there is little doubt that some have given up on gold as too volatile.

But the flood of metal out of GLD, like the current structure of forward rates, hides the essential fact of this market. Namely that gold supply is not readily available to satisfy immediate demands when they become more acute. That should be a larger factor in setting the price, but gold is unique in that every ounce ever mined is theoretically available for supply and thus this “deep storage” gold can become an important consideration. It seems financial demands are once again proving to be paramount in dislodging stored gold.

That is counterintuitive in some respects since a shortage in readily tradable supply would normally be directly translated into higher prices. In economic terms, it seems that the marginal price for moving deep storage into filling that role has declined. More to the point, that marginal price for deep storage appears not to be the price of gold in ounces at all but rather the money rate (GOFO) – thus the linkage with GLD and gold swaps. That also makes sense given that so much deep storage gold is now in financial custody after more than a decade of customer accumulation.

Currently, gold forwards are again negative out to 3 months, with the 6-month rate below 5 bps (the lowest since late October). Outside of what was clearly taper-driven selling after the FOMC announcement, that should be favorable to prices. And gold has rebounded somewhat since that largely one-off move.

But the real question is when we might see more fundamental prices and the larger moves common before the middle of 2013. Despite these fundamental factors, I still think it comes down to demand for “tail risk” insurance, and right now there isn’t a lot of marginal demand from outside agents. Because of this “happy accident”, from central bank perspectives, where gold leasing reinforces the idea of central bank success, gold is likely stuck. Until the allure of the central bank efficacy wears off, it looks like gold remains a victim of circumstance; one gallingly created by the very programs gold investors most abhor.