It is exceedingly difficult to interpret the data in any other manner. That is bolstered greatly by reality of the post-taper environment, where issuance has declined dramatically. Yet, it was the talk of taper originally that set that decline in motion, echoing the feedback effects of this “extraordinary” monetary intrusion.

Since Bernanke’s QE3 promise back in September 2012, repo volumes and rates have declined precipitously. There is a clear relationship between them, as intrusiveness of QE on collateral streams and chains is direct and heavy. 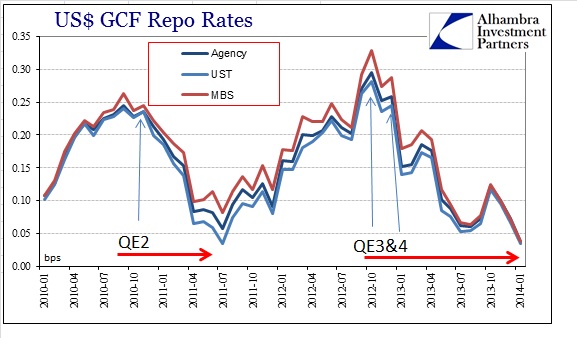 That feeds backward into collateral availability, as lower rates are a disincentive for collateral silos (pension funds, prime brokers, insurance companies) to lend out securities into the repo markets (less spread available to “earn” on securities lending). The direct connection to QE has been the reduction in available market collateral, as QE itself is a non-market silo, scalping what would have been available to the market and rendering it mostly useless into SOMA. Thus, the channel for repo decline begins as demand for repo collateral reduces the rates at which cash is lent, and thereby reduces the incentive for additional collateral to enter. 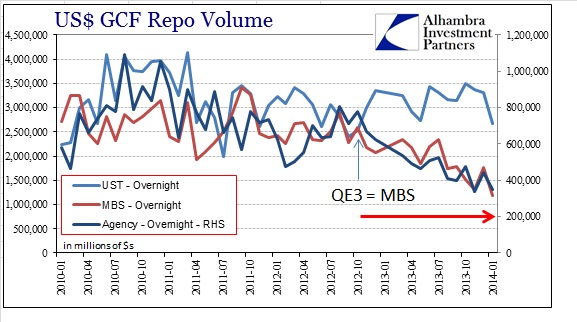 From the moment of QE3’s first MBS purchase in October 2012 (into the TBA market) repo volumes in the mortgage end have been falling; where UST repo volumes have been at least steady (if not rising). That would certainly indicate a stress upon the financial system as reduced collateral availability restricts vital flow regardless of “money stock.” 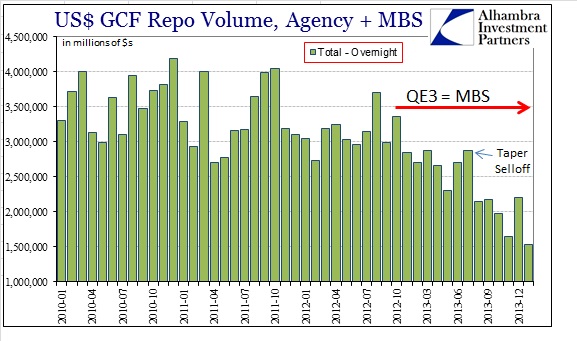 Just to quantify what I am talking about here, MBS repo volume (average daily) has fallen 58% since October 2012; from $2.59 trillion to $1.08 trillion per day. Agency repo volume has declined 70% over the same period; from $778 billion to $236 billion. A large proportion of that reduction has taken place since April 2013. Further, it’s not as if the UST portion of the repo market has taken up the slack; average volume is 1.9% below October 2012.

The effects have been, as I said above, most evident in MBS repo. What is less clear from these volume statistics is the overall manner in which dysfunction spreads. The stress on collateral availability appears to have moved backward, again the feedback loops, into funding conditions at the most basic level.

For example, beginning in April 2013 there was a dramatic and drastic shift in repo financing away from term and toward near universal reliance on overnight rollover. 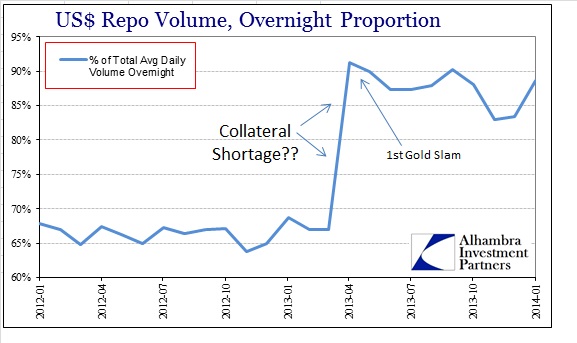 It was a dramatic shift in repo positioning that coincided exactly with the first appearances of repo troubles (negative repo rates in certain UST maturities) and especially the first cascade in gold prices (as an alternate collateral source). There is no direct evidence for what would have caused such a shift, but we can hazard a few reasonable guesses. 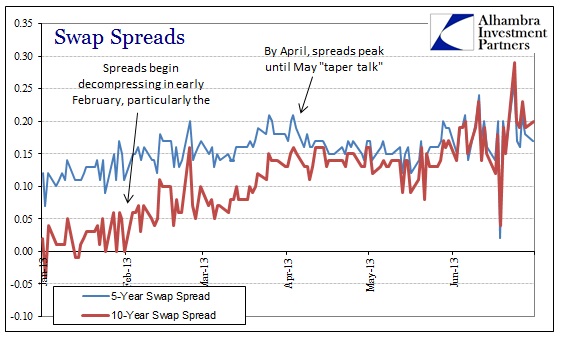 The structure of swap spreads and even some minor adjustments in eurodollars may have presaged the coming change in credit regimes. In other words, there was a dramatic shift in risk positioning ahead of the broader selloff. We can also see this in the relationship between repos and reverse repos. 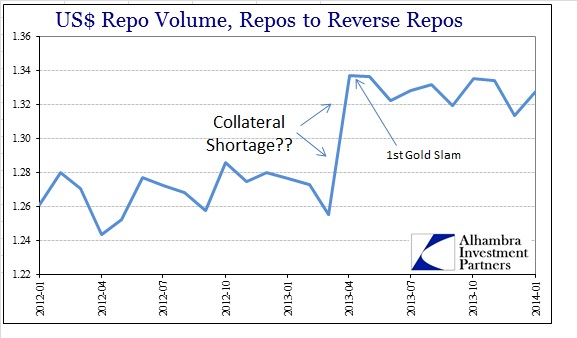 Comparing the volume of repos to reverse repos gives us a very crude measure of rehypothecation inside the system, or at least marginal changes in that process. It would seem according to the April increase in the ratio as funding market participants were increasing the level of rehypothecation, likely in response to sudden shifts of collateral shortages as risk positioning “evolved.” Even more interesting, that April shift has remained, indicating that it was both structural and durable – a paradigm shift in credit?

There is a possibility of discontinuity in the data (all the above and below are taken from SIFMA) but there is no indication that is the case. Further, there is no concurrent change in the term structure of the reverse repo segment, meaning that securities lenders were still lending at term (rather than overnight like cash) throughout this period. 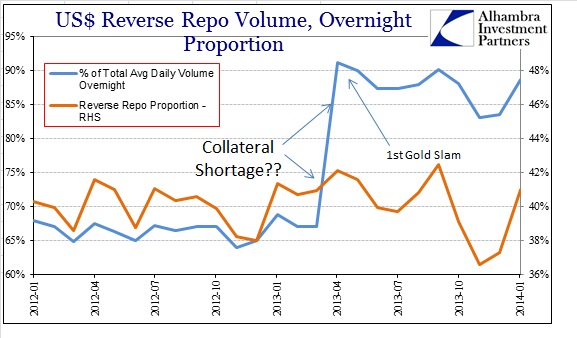 The coincident indications of other credit market properties concur with that assessment. It seems as if the threats, or even rumors of threats, of removing the unlimited nature of QE caused a radical shift in risk and thus funding positioning in these vital markets. The net effect has been a reduction in flow capabilities, likely explaining why credit markets have reacted so disproportionately to the absolutely minor degree of taper. That would be true not only for this period from April to now, but also of the degree of violence in the May-June selloff (and in other dollar-related markets). This funding transition would have represented real difficulties in maintaining risk positions, particularly in MBS, as leverage was unwound with mere talk of monetary policy shifts.

As is usually the case with these kinds of changes, on net participants are in even riskier positions now despite having run through a tightening event. Just as 2007, repo counterparties are now disproportionately dependent on overnight rollovers at the very same time the supply of collateral is dwindling – and rapidly. That would suggest, as strongly as possible, that taper is a foregone conclusion for the near future. The quicker it is unwound the better for funding and repo markets. The problem, however, is that the pace of taper is not matching the drastic reduction in issuance; leaving the repo market even further behind. I think that is what the GCF rates are telling us, particularly as there is no longer any spread among the three repo collateral classes at all.

The latest pronouncements on such matters from the FOMC tend heavily toward a lack of awareness (not surprisingly). While emerging markets have been noted, there is still a proclaimed faith in such problems being “contained.” The collapse in repo might suggest, again strongly, otherwise. Such great and heavy global ripples upon the most minor of policy perturbation, a tremendous incongruity that should caution the very idea of QE, ZIRP and the whole regime.

While stock investors are more than happy with the overall results, the rest of the world, including credit markets in this new paradigm, not so much. I’m not sure about the Fed “losing control of the curve”, but I suspect it might look something like this.