In the Spring of 1991, Lee Hoskins, then the President of the Cleveland Fed, penned an article that defended his view of inflation against what he considered the mainstream critiques of that position. President Hoskins favored zero inflation, a thought long since banished from anything in the orthodox literature. He even went so far as to argue that zero inflation was better than even a stable inflation rate, but that theory used far too much common sense to make much in terms of winning converts. As he noted, unfortunately in approving terms,

Based on the papers presented, I think it is fair to say that our profession has yet to deliver a compelling theoretical treatment of the optimal rate of inflation that deserves to be embraced as the new conventional wisdom. This is not particularly surprising. Economic understanding progresses through intellectual competition among alternative, stylized models.

Common sense and intuition are left at the door, to be replaced by the dominance of econometrics, the pseudo-science of the Great “Moderation.” Math may be objective in one sense, but that does not render it as fully scientific. As the old computer programing adage relates, Garbage In Garbage Out is just as valid in econometrics as any computer program.

Those arguing in favor of stable, but positive inflation, now the universal canon of orthodoxy, object to a zero rate largely due to their position on monetary neutrality. In other words, because the orthodoxists believe that monetary policy has no lingering effects on the real economy inflation itself can thus be stable and have the same neutral imprint. If economic agents, as this theory holds, believe the Fed can and will establish a positive, stable inflation rate then they will plan actions (both present and future) on that belief. That is the essence of rational expectations theory.

Thus, the orthodoxy believes low and stable, but positive, inflation is “necessary” as a condition to forestall any possibility of the dreaded “deflation.” Since monetary policy is thought neutral, therefore that low and stable inflation is no different, in terms of costs, than zero inflation. Incorporating these subjective assumptions into those stylized models, a stable but positive inflation rate produces the fewest simulated wanderings into deflation. That added benefit of being a buffer against deflation (absent any acknowledgement of longer-term costs and distortions) has pushed the idea of the low, stable inflation paradigm to the core standard of what is judged as effective monetary policy.

While the idea of targeting a specific inflation rate was resisted for years, even decades, the Federal Reserve acknowledged a 2% rate recently. In January 2012, the FOMC announced,

…that inflation at the rate of 2%, as measured by the annual change in the price index for personal consumption expenditures (PCEPI), is most consistent over the longer run with the Federal Reserve’s statutory mandate.

There have been noted (assumed) economic benefits of inflation as well, most heartily in the introduction to QE2. In November 2010, then-Chairman Ben Bernanke wrote in his (in)famous Washington Post oped:

Although low inflation is generally good, inflation that is too low can pose risks to the economy – especially when the economy is struggling. In the most extreme case, very low inflation can morph into deflation (falling prices and wages), which can contribute to long periods of economic stagnation.

More recently, affirmed by that January 2012 commitment, the FOMC embarked on a third and fourth dose of QE, trying to finish what the first and second could not. Failure in that regard was implicit in the fact that the new and larger monetary intrusions were even considered, let alone carried out. In pure inflation terms, QE appeals solely to inflation psychology since, as a matter of bank function, reserves created through the QE process have no direct station upon actual economic outcomes, a fact even the Federal Reserve itself acknowledges.

Given such self-proclaimed obligation and theoretical exposition, how do we treat actual inflation observations over the past two years? Science, which economics claims association, is nothing more than observation, with theories confirmed by repeated observation and falsification. The latest inflation figures, indeed all those since the middle of 2012, show exactly the conditions Bernanke was warning about in justifying the second QE episode. 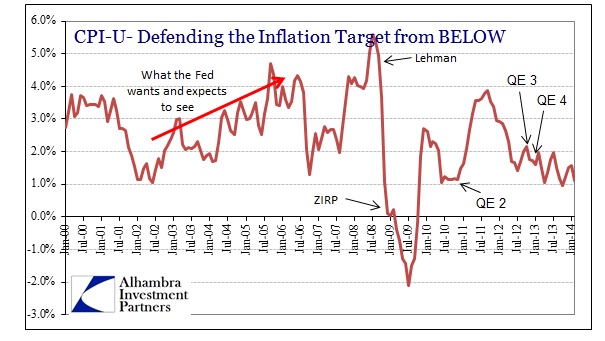 In almost every official inflation measure, the Fed has failed in its commitment to maintain that low, stable but positive rate. The current rate is both low and positive, to be sure, but it is certainly not stable, trending lower and lower as this current “cycle” progresses. Worse, in the parlance of the FOMC, it is indeed in danger of “anchoring” far below that 2% soft target. 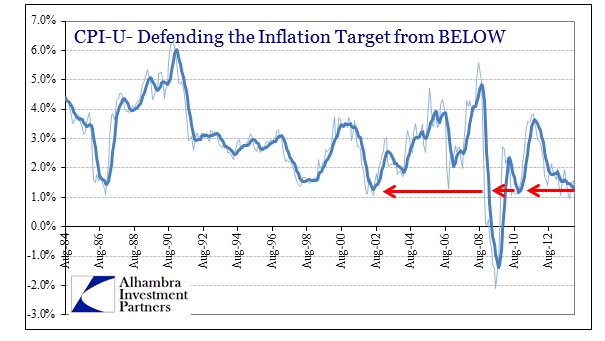 This is not to say I agree with the orthodox proclamation, I certainly would favor something closer to the Hoskins idea of actual price stability over “orderly” debasement, but only that these monetary prescriptions that do conform to the theory have (conspicuously) not produced those results. In spite of the heavy hand of monetary policy, observation confirms failure of that policy to achieve its aims. In light of scientific principles, that should (and does) invalidate the theory that monetary intervention is effective in creating the low, positive and stable inflation environment (whether that pertains only to the current case or all cases does not matter here, though I would argue that it is universal). 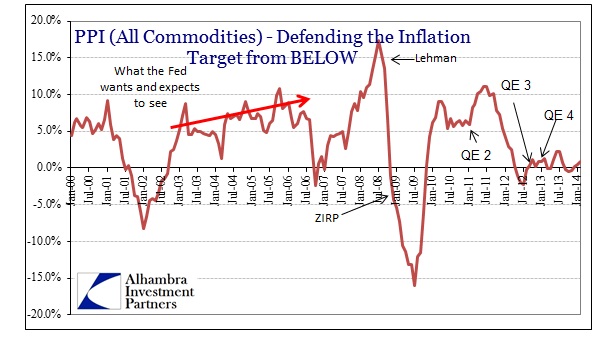 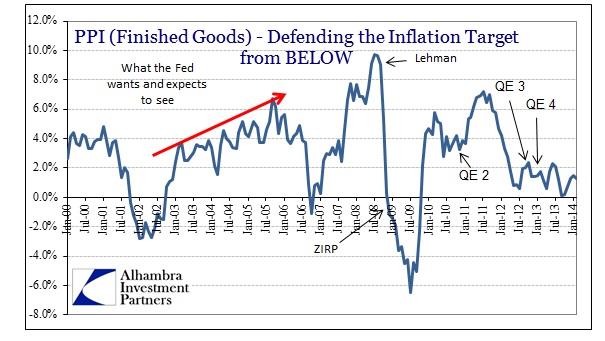 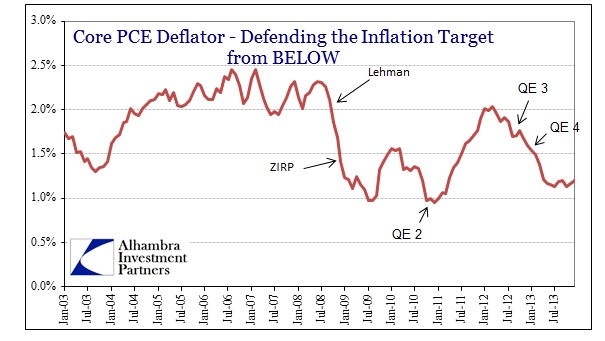 That should open the orthodoxy to further questions and explanations as far as additional dimensions to that failure. At the front of that inquisition should reside the core rot of all monetary formulation, the idea of monetary neutrality itself. As I detailed this morning, there is nothing neutral about such policy intrusions, let alone of the scale we see now, or have seen for decades.

Again, the main thrust behind QE has been a real recovery with stable and positive inflation – with the two reinforcing each other. If one were to take an unbiased look at both activity and inflation, you would be forced to conclude that neither is occurring. In fact, both inflation and economic activity follow the same exact pattern – the decline in the early half of 2012 indicating unambiguously a dropoff in actual economic demand. Worse, despite two additional QE’s, there has been nothing to arrest that decline from sliding ever so slightly further toward the economic abyss. To the orthodox, that takes the form of snowflakes and thermometers; to everyone else it looks like total monetary failure and desperate trouble.