Looking For Jobs in Taxes

Looking For Jobs in Taxes

Since there exists more than a bit of doubt about the state of employment in the United States, at least outside mainstream commentary, that dissatisfaction with the BLS/Census Bureau leads observers and analysts toward other data sources. When speaking of jobs you would think it far more readily obtainable, particularly without the need to resort to statistical trend analysis with modeled seasonal adjustments. After all, everyone (mostly) with a job pays taxes, and every employer that pays those wages does too. Tax data should reveal job growth.

But it really doesn’t, unfortunately. Despite a dizzying bureaucracy that can tally and estimate nearly everything else, the Treasury Department gives us only generic tax collection categories (as part of its Daily Transaction Summaries). Worse than that, as you might expect, the state of tax collections is often left to fiscal factors unrelated to the macro economy.

We have close memory of just such a factor with the “fiscal cliff”, or at least the tax increases (or sunsetting parts of the Bush tax cuts from the last recession) that came out of that “discussion.” That renders any comparisons between 2013 and 2012 as wistful guesswork – but does that extend into 2014? 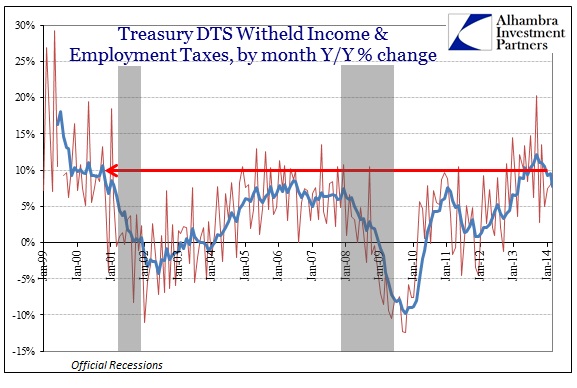 As you can clearly see above, tax collection on “withheld income and employment taxes” have surged since the new tax regime was implemented. The level has fallen back somewhat in 2014, but remains well above almost every other part of the “recovery.” If that indicates a growing job trend, then it should lead to close comparisons.

As the red arrow shows, the rate of tax collections on work is closest to that seen in 1999 and 2000. However, the rate of job growth throughout that period was far higher, at least according to the Establishment Survey. 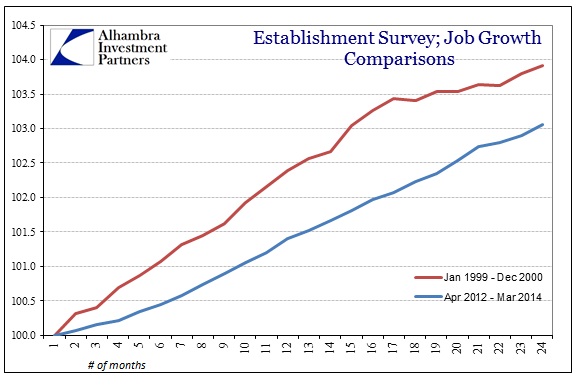 That certainly highlights the distinction in tax rates that prevailed in 2013. And it doesn’t tell us all that much about so far in 2014, particularly given that the high rate of tax collections in the latter part of 2000 remained so right up until the 2001 recession (which is just off the end of my review period above).

Looking elsewhere, the Treasury Department does at least break out individual withholdings through 1040ES (primarily), but here too we have the problem of tax regime change; specifically the spurt of income payments in November and December 2012 to get in before the tax clock. 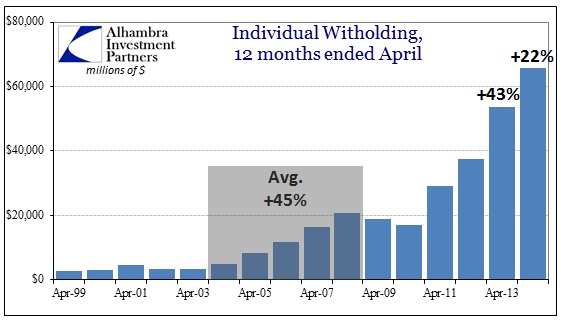 It is noticeable that the growth rate has dropped significantly for the twelve months ended with April 2014 (with only one more week of collections left). That cannot, however, be fully explained by the tax avoidance behavior, indicating superficially some contradiction toward the optimistic take on employment withholdings. Tax payments through individual withholdings are often tied to other forms of income, especially non-earned (read: bubble) income.

That also brings up another possibility with the withholdings from employers. Like 1999-2000, employees may have adjusted their withholding allowances and estimates based on comprehensive expected tax liabilities. Since the “average” retail investor remained on the sidelines until 2013, it may be that the stock surge since late 2012 is being reflected in some part here.

Finally, corporate taxes are not keeping up with the assumed pace of business income. Not only did the growth rate drop through April 2014, gross collections remain far below the peak in 2007 – again tax rates muddy the comparisons as there have been assorted tax breaks for companies in the past few years, particularly accelerated depreciation. However, again, that doesn’t seem to offer a full explanation for either the persistent gap or the very much slowing growth rate in tax collections. 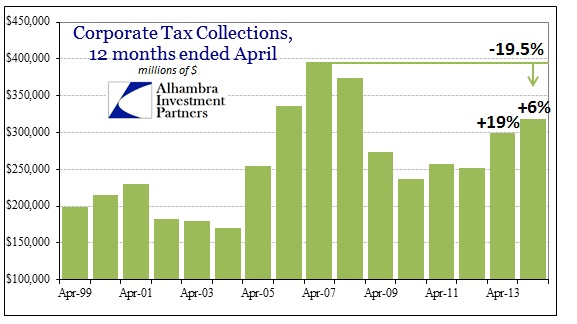 In other words, nothing conclusive can be gained by reviewing tax collections, only minor suggestions. That is a shame because it would otherwise offer a purer sense of labor since we are dealing with actual dollars rather than surveys and statistics. I do think that the surge in tax collections is overstating the optimistic labor market case (bringing the individual withholdings into analysis) by a considerable amount. But there is no way to tell by how much. Perhaps the only conclusive takeaway is that tax collections do not drop until after recessions are well underway, making them a very much lagging indicator.