Capex Seems To Be Running At Only Replacement

Capex Seems To Be Running At Only Replacement

The cyclical change from sustained growth toward recession impacts a broad section of the economic system, but does so in different ways. Consumers grow more cautious as income growth fades and price signals get confusing and less consistent. For businesses, the proclivity to expand production capabilities is scaled back to something more like just replacement levels. Instead of adding new machines or adding to facilities, caution interrupts that and becomes more about maintenance than expansion.

In recession, businesses will fail to even keep up with routine “replacement” expenditures, which actually contributes to the recovery portion of the cycle being usually so robust – the recession-caused delay of “necessary” replacements boosts activity powerfully in the early stages of recovery as businesses catch up. Should that impulse not follow through, as it clearly did not after the middle of 2012, you have to wonder about exactly what businesses are feeling with regard to “necessary” levels of replacement.

This morning’s durable goods report showed pretty much the same as we have seen for some time. There was a rebound in March and April (with April much less than March) that is being used as support for the weather thesis (though I’m not sure why capital spending would be depressed by low levels of sunshine). 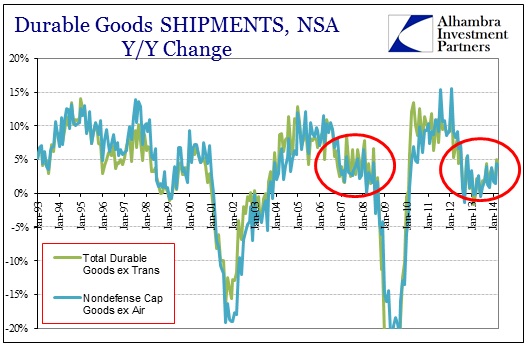 What we really see is a trend that goes back to late 2012, where business levels were severely depressed (by something other than seasons, obviously). That meant the start to 2013 was much worse than even the low levels we see right now. But even with that in mind, this “rebound” off the 2013 extreme only brings activity back to 2007-08 comparisons.

Under a more granular view, this pattern is actually a repeat of that period. Durable goods, especially capital goods, spending depressed worse in early 2007 than in comparison with 2008 – even though the first four months of 2008 were entirely within an official recession period. I think that confirms this new trend of businesses slowing off growth and then resuming only a replacement level of activity. It is an abundance of caution that belies any robust assessment. 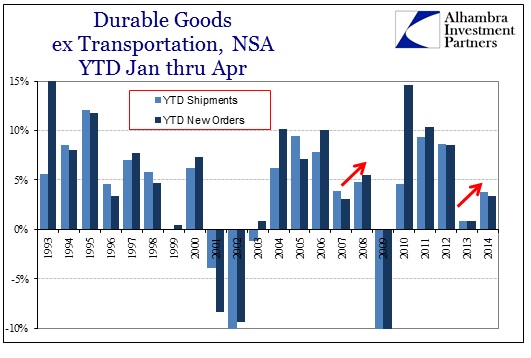 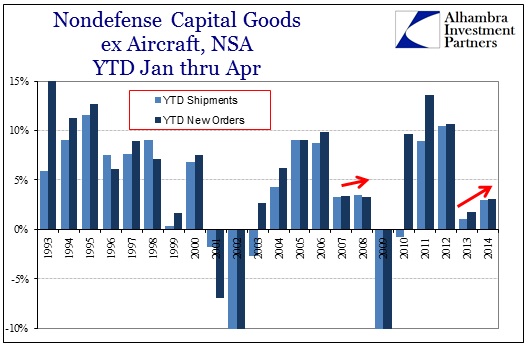 The absolute level of growth continues far below what would fairly be called sustainable “expansionary” growth in capital spending (and broader durables). The fact that we are now approaching two years under such conditions, like 2007-08, is a warning about business activity going forward. 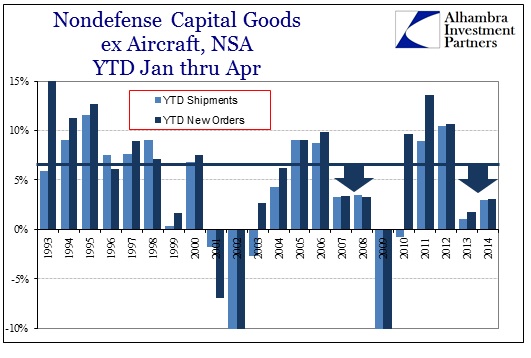 Even including the “weather” rebound in March and April makes no difference in the level of activity. That means whatever weather effect occurred was only a minor nuisance. Overall, businesses are not taking their large cash positions and indicating a capex resurgence, which really is unsurprising given the massive expansion in debt next to the obvious and persistent decline in consumerism.

Taken together, as with everything else so far in 2014, I think you see both the structural deficiencies lining up with potential cyclical factors.