Why Can’t Oil Be Oil?

Why Can’t Oil Be Oil?

For most commentary on the recent and sharp decline in oil prices, there is a serious ceteris paribus to it especially from those that don’t recognize that there are much deeper financial forces. The following is excerpted as an example of the closed system approach, as if there is a world of difference that can allow “decoupling.”

What matters is what’s causing prices to decline: an increase in productivity or a decline in economic activity. Only in the second case is there a serious danger that the Federal Reserve should try to respond to. Similarly, rising prices can be a sign that monetary policy is too loose, but can also reflect declines in productivity.

This is a tangential explanation to the second stage of oil price excusing. Some will “predict” that though demand has fallen, “unexpectedly” of course, it will not remain so weak for so long. This alternate but associated justification is that foreign demand, and only in discrete locales that are unrelated, is to blame as the US surges forward unobstructed (5% GDP and all that).

There are, however, two wrinkles worth noting. One is that although the fall in the price of oil doesn’t appear to reflect any weakness in the U.S. economy, weakness abroad may be a factor. But that’s a reason to loosen money elsewhere, not in the U.S. A second is that there is a reasonable argument that monetary policy in the U.S. has been a little too tight even leaving aside this price decline. If that’s correct, then some added pressure for loosening, even if that pressure is based on a mistaken worry, might not be such a bad thing.

And thus the utter craziness of monetarism is on full display, in that after arguing that declining oil prices are good for American consumers, they are also suggesting that monetary policy is “too tight”, and thus oil prices are contradictorily “too low.” That betrays the central aspect of this orthodox embracing of lower energy prices as nothing more than a shaky rationalization – they still are not comfortable with low prices but accept them lest anyone get worried about what they really suggest. Orthodox monetary theory is, when stripped of its academic trappings, dedicated to high oil prices and low wages.

Ultimately, oil prices do not operate in a vacuum, nor even a financial one. If oil prices were on their own declining as they have, this argument might have more merit (stress and overstress “might”). However, these closed-system masters, as they fancy, never address financial reality. Oil prices signal economic weakness and bond markets second that. The US bond market is not purely dedicated to Russian economic foundering or Brazilian inflation, but rather growing quite concerned in historical context of US economic cycles. 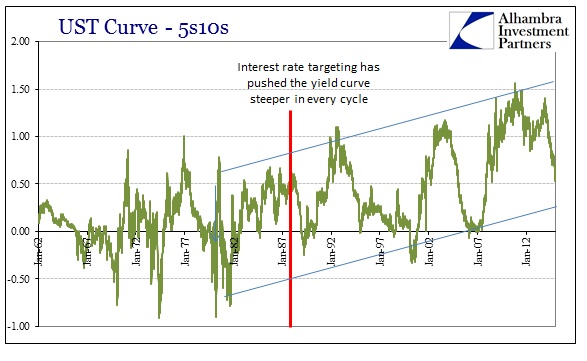 The yield curve itself has been shifted upward by the late 1980’s intrusion of interest rate targeting – where the Federal Reserve has obliterated the meaningful restrictions on private “money supply” (NOTE: we still do not know specifically when the FOMC switched to a pure interest rate target of the federal funds rate, but it certainly was evident before and heading into the 1990-91 recession). That is the problem with these closed system adherents because saying something like, “that’s a reason to loosen money elsewhere, not in the U.S.” is wholly unlike financial reality.

The credit markets are in tandem with oil prices, not on some distant shore but these United States. Despite the artificial and upward shift in the yield curve, the relative relationship of its shape has been a near-universal signal of contractionary tendencies. In that altered respect, the current flattening approaches what might fairly be called equivalency with past episodes. 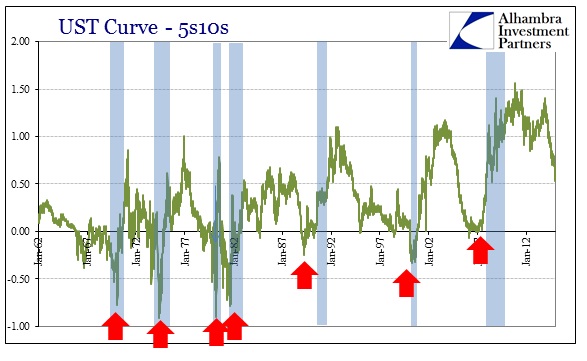 The commonality is, of course, the modern “dollar” and its eurodollar aspects. The global exchange standard altered in the late 1960’s and then again in the 1980’s. There is no coincidence that bubbles, global credit bubbles, started under the latter as eurodollars began to “finance” not just trade but speculation. That is the nature of this artificially steepened yield curve – and its opposite position is that undoing. 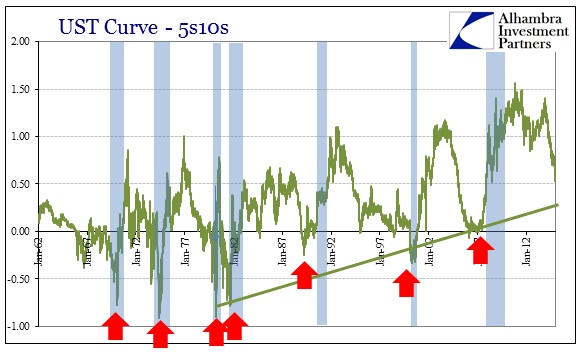 Ambrose Evans-Pritchard, writing in The Telegraph in the UK, at least recognizes that the world is united under a “dollar” system, but then dismisses that very linkage.

The world’s financial system is on a dollar standard, not a euro standard. Global loans are in dollars. The US Treasury bond is the benchmarks for global credit markets, not the German Bund. Contracts and derivatives are priced off dollar instruments.

My own view is that a world awash with excess capacity cannot withstand a fully-fledged dollar tightening shock. The effects will ricochet back into the US eventually, but that could be a long time hence, and this in a sense is the problem for asset markets.

That’s precisely the point, as “long time hence” has never been such with the yield curve drawing as it is now. Oil and credit are not pricing in some far distant reverberation backward into the US, but one that is far more local than anyone would like to admit (GDP is 5%!!!). This was reinforced, strongly, just today by more “unexpected” “supply gluts”:

Global oil markets sold off again on Wednesday after a one-day pause as large build in U.S. crude stockpiles surprised investors who had expected a draw, adding to worries about a supply glut that has battered prices for six months.

That would seem to suggest that energy usage in the US is actually more consistent with credit market indications than GDP. “Tight dollars” is a bank balance sheet reflection of global risk that is not sliced by location, but rather a universal expression. We are one economy and it is feeling Japanese.