Only Stocks Are Left Minding The ‘Recovery’

Only Stocks Are Left Minding The ‘Recovery’

If I had to define the recovery period that developed after the trough in the Great Recession, it would have ended sometime in the middle of 2011. Up to that point, there was almost a uniform behavior in financial and even economic accounts (though, on the economic side, there was much left to be desired). It was by no means uneventful, as you would like in recoveries, but that was as much a systemic and structural problem as anything to do with cycle. That ragged end, as new doubts essentially replaced widespread hope, remains with us in a series of divergences that are only now closing (in the wrong direction).

Given the central task of every central bank, subscribed to themselves, is essentially “inflation” that is a good place to start. 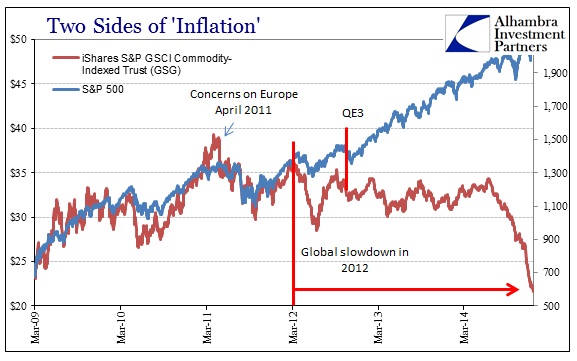 Unlike the orthodox view, I take a far broader perspective on “inflation” which includes all possible uses for “money” and credit (while admitting that the central bank does not create it, instead seeking to influence bank actions in the “money supply” and far more important “flow”). Commodity prices and stocks were very much aligned coming out of the depths of panic, even through the major bumps in 2010 (including the flash crash and onset of Greece). The more serious outbreak of uncertainty and fear in 2011 was unable to dislodge the correlation, as both commodity prices and stocks gyrated, but at the same times and in the same directions both up and down.

It wasn’t until early 2012 that any sustained divergence appeared. Whether this durable rift occurred early on in the year or later around QE3’s introduction is really irrelevant, only that the significant events of that year were these differing tacks in “inflation” while the global economy, including the US, dropped off the prior recovery path.

Commodities, having to settle and clear physical imbalances, are certainly attuned to monetary instability but are thus more likely to be anchored by the “demand” side of the equation. The fact that commodity prices had been inching lower ever since 2012 comports with almost any measure of global economic performance. That, of course, raises the issue as to where, exactly, stocks are being anchored. The argument over earnings and earnings growth is a valid one, but there again lies the problem in how exactly earnings are being determined and derived. 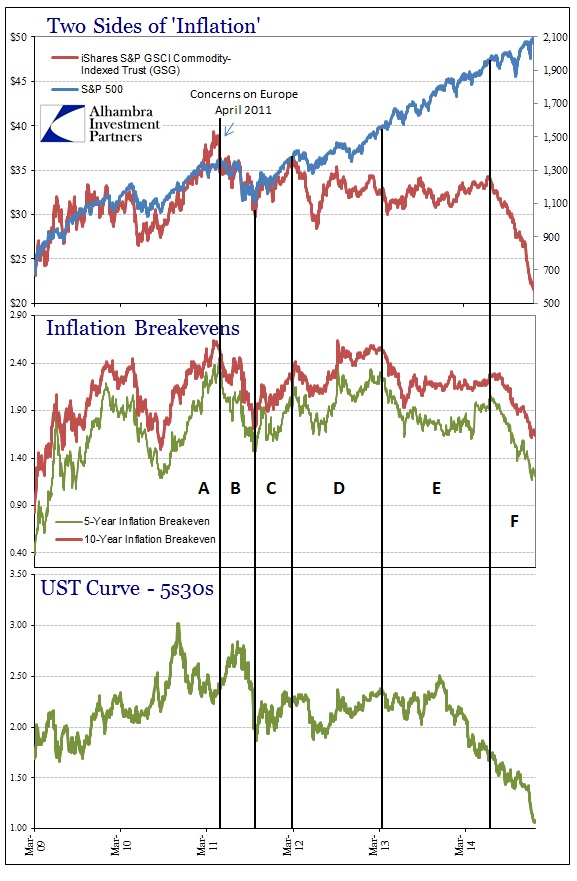 If we add additional financial measures to the mix, these inflections start to line up with the historical record of significant events. Through periods A, B & C in the chart above, all the “market” indications are in agreement. Period A, for the most part, sees the yield curve steepening, inflation expectations and commodity prices rising while stocks echo what looks to be the “recovery.” Period B is the opposite direction as “dollar” fragmentation appears alongside euro difficulties. Period C reverses B as globally “coordinated” central bank activity appears to restore calm and order.

But that was essentially the frailty by which this divergence between stock “inflation” and commodity “inflation” was created. Period C was replete with massive intervention, including significant action at the ECB, BoJ and even the Fed ($ swaps) that, as we see very clearly now, had little to no effect on the real economy. So in Period D divergences set in with first commodities diverging from financial sectors and indications.

Period E was defined by “tightening” as central banks shifted into “buying” the artificial appearance of order as if it were actual economic growth. Thus, inflation expectations joined commodity prices in at least moving sideways rather than upward conforming to the recovery narrative as set forth by central banks and economists (despite that narrative being reiterated and emphasized as it was at every turn).

Period F is the latest “tightening” phase, started in mid-June as repo difficulties followed closely the ECB’s negative rate decision, that has far exceeded the prior outbreak in scope and depth. The primary indication here is that everything is once again back in harmony, whereby the indications are all moving lower and toward harsh pessimism at the same time and to the same high degree; except stocks.

Somewhere in Period B or C, the recovery ended as it was shattered by the global slowdown of Period D; in other words the promise of monetarism acted out in “emergency” and “unconventional” policies was never delivered. Ever since, each of these financial markets, indicated by almost any credit market rate or factor, have come to terms with that as reality except stocks. Periods A-C were unbreakable belief in central bank efficacy, which was severely diminished by 2011’s near-panic rerun and the slowdown that followed. This latest period is perhaps the final undoing of all of that, made so by the 2012 global slowdown that has been impenetrable to monetarism in any form in every location.

Commodities broke first because there was the direct link to actual rather than imagined activity; inflation breakevens next; followed by the yield curve in November 2013. Either stocks have permanently decoupled, continuing exclusively within the realm of central bank omniscience that has been rebuked time and again, or there will be a Period G where full harmony is restored; that is everyone’s greatest fear.