Dead Money US$; The OIS Disappearance

Dead Money US$; The OIS Disappearance

In taking the lessons of OIS in 2007-08 to analysis, the immediate approach would be for skepticism about OIS in isolation right from the start. To that end, LIBOR-OIS suggests absolutely nothing out of the ordinary by itself. 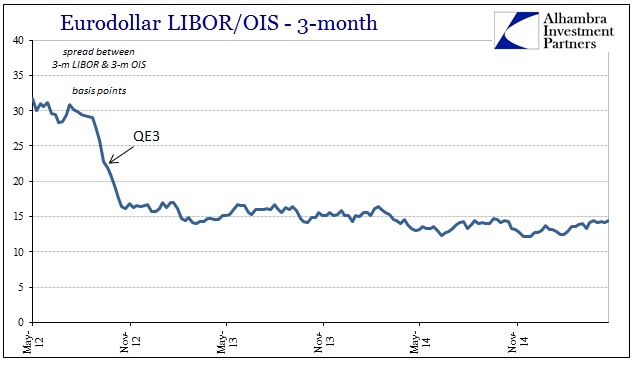 That is particularly odd since we know without any doubt that there have been severe liquidity problems at numerous points since QE3 was first implemented. Further, a good part of those liquidity irregularities have been closely tied, if not arranged by, difficulties in repo markets. That would seem to suggest that the OIS/repo substitution of the pre-panic period may not be as useful today. We don’t have to hunt for a reason for such a change in interbank mechanics, as we know without much doubt that the interbank markets themselves are a shell of what they used to be.

If there isn’t much activity in the unsecured interbank sections, then it is highly doubtful there is much trading at all going on around OIS. That would seem to be confirmed by the utter complacency of it as it relates to these discrete periods of high liquidity stress. 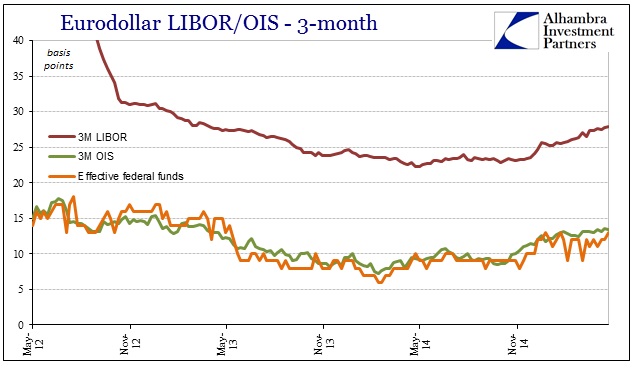 Viewing only the chart immediately above, you would get the distinct impression that the past almost three years have been unusually uneventful. The only other possibility is that there is so little action and activity here that these figures amount to “dead markets”; and are thus not really markets at all. If you know much of anything about the liquidity situation post-QE’s, then that actually makes a lot of sense. The idea about a robust wholesale market like federal funds is an active trade from both demand and supply perspectives. QE, for whatever else it does, has effectively ended persistent demand; leaving only a marginal over-supply that looks to place liabilities only sporadically in any size. That is why the federal funds rate rarely varies and it seems OIS has caught the same setup.

Whether OIS is devoid of activity of its own post-panic condition or whether that relates to the lack of sustained volume in federal funds is actually immaterial. What matters is that these markets appear to be, again, dead. Thus, we cannot take much of any interpretation from them; but that factor itself is actually quite important in setting and viewing other parts of the interbank system that aren’t so inactive. 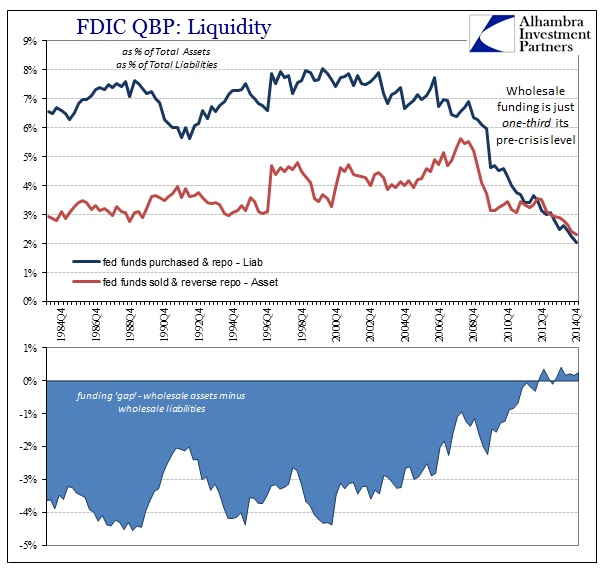 This is a topic that I have covered before, as shown in the FDIC’s Quarterly Banking Profile (through Q4 2014). Clearly, the domestic side of the wholesale markets, which would cover federal funds but leave out eurodollars, have so shrunk as to be almost miniscule. However, we cannot from these same figures determine repo size, which isn’t always reported directly and fully, though even internal repo figures show a decline in volume.

Compare the OIS-federal funds trajectories with their European counterparts (below) you get a much better sense of what these markets “should” look like. The lack of dispersion surrounding the LTRO’s, among other factors, have left these interbank markets still a full part of the liquidity arrangements in Europe. Further, since the banks mostly participating here are those that also heavily participate in eurdollars, there are reasonable “dollar” interpretations to be made exclusively from this view of the wholesale world. 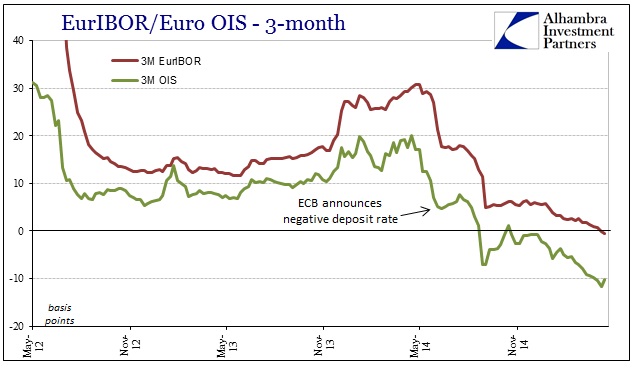 This is an active market, such that one with so much ECB interference can be. This category here is predicated on Euribor, the euro version of LIBOR, and the OIS cues off Eonia (which is supposed to be directed by the ECB’s MRO, but that I have already covered that “anomaly” over and over). When looking at the Euribor/OIS spread, you start to appreciate why the ECB suddenly acted on the negative deposit rate in early June 2014 and then again in September. 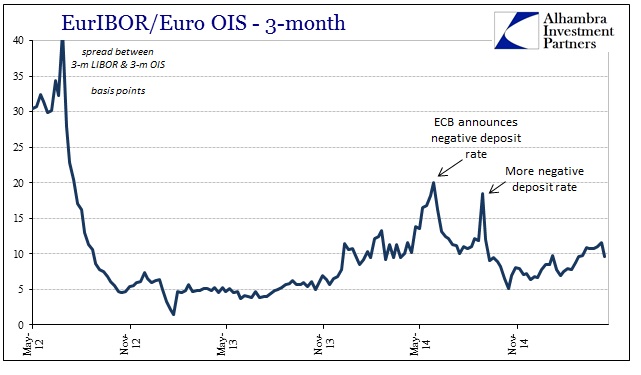 So where the US$ version of these interbank numbers show almost nothing, the European side begins to suggest why there has been so much problem with bank balance sheets and liquidity in the global wholesale system starting around that time. Again, the euro is as much connected to, and of, the eurodollar as a global system; stress in European banks is stress everywhere, up to and including the “rising dollar.” That is why I continually refer to the ECB’s negative deposit rate as the inauguration of the June eurodollar “tightness” as it is abundantly clear that there was a European genesis for it – and that the negative deposit rate rather than ending the matter and fixing liquidity instead confirmed for everyone in the wholesale system that it was time to get majorly defensive yet again.

Despite the tepid behavior of federal funds and the US$ OIS off it, the European versions suggest that QE there hasn’t had much of a diversion on growing stress in 2015. While not peaking as much as that June 2014 stress indication, the upward slope of the Euribor/OIS spread suggests that banks aren’t exactly “happy” participants in euro interbank – and the term rise in US$ LIBOR suggests that the same disruption may be carrying out into eurodollar markets. That would also submit a more direct compliment to recent repo events, as US$ GC rates have been unusually volatile and elevated. 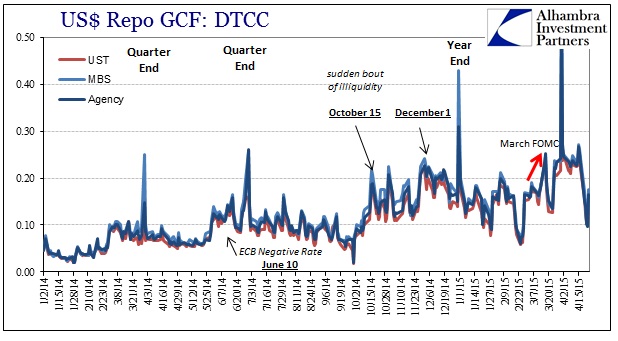 Without evident hierarchy and order we can’t assume even the most basic of spread decompositions simply at face value. There has to be a more comprehensive approach to liquidity detection that places much more emphasis on corroboration. In 2008, that was plainly evident as the FOMC was, over and over, desperately searching for what amounted to confirmation bias regardless of whether it actually made sense in more than just a very narrow window. The same applies to 2015, as if we needed anything apart from the “rising dollar” to suggest it – the liquidity problem related the global “dollar” short becoming more and more “expensive.”

The common theme among all these figures and interpretations is bank balance sheets, whether euro or eurodollar, likely constricting in various ways over what I believe continues to be growing fundamental awakening and awareness. I further believe that the diminishing wholesale capacity, owing to QE and monetarism more generally, makes this a far greater problem than it might be otherwise under actual “normal” conditions. The continued lack of order and hierarchy across interbank markets of various parameters is a warning about all of this. Even the US$ OIS itself is in some respects a similar warning, as that is another representation of systemic atrophy that might be an immense problem if things truly get rough.

That is the real worry here, that so much disruption can be the result of so relatively benign conditions. If there were truly a liquidity appeal, broad and sustained, perhaps even greater than October 15, the lack of trading in OIS and federal funds shows that there are fewer “pools” of active participation with which to absorb it (maybe that is why October 15 got so far out of hand in the first place?). What might happen to repo function if serious stress occurs like that of February 2008 but now without the OIS means to hedge, and thus another very important element of multi-dimensional liquidity being already burned? Maybe that is why repo rates have become so elevated more recently, up to April 15, as there is without much volume in OIS a higher liquidity premium for repo markets.

There is a definite asymmetry at work, especially when compared to the serious and immense pressures of 2007-08, that suggests capacity itself may be the most significant weakness. In any case, nothing about interbank markets appears as if healed and restored for any central bank to entertain the idea that the ghosts of 2008 have been exorcised by their own hands. If anything, the persistent disarray across various components, and the dead markets that accompany that, provide good evidence that the wholesale system remains in a state of dysfunction. We can surmise that it will remains so until the eurodollar standard finds its inevitable next step; and thus central banks are just trying to delay the inevitable. They need to be very careful about what they use as standards for even those efforts. 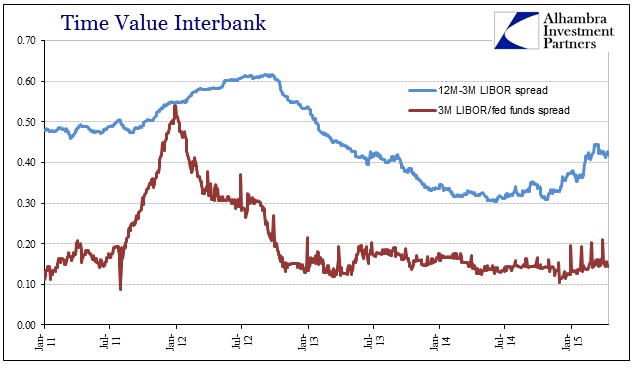 NOTE: similarities and differences between Europe interbank and eurodollar/fed funds interbank starting in August 2007 – same basic principles from order and hierarchy to discord even if expressed somewhat differently: 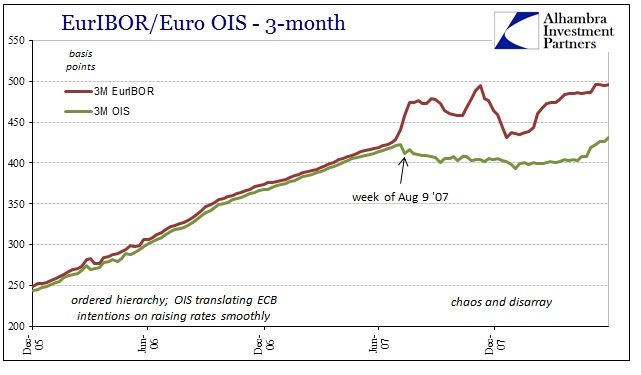