I understand the idea behind trying to get exports to fit into the orthodox conventions about the dollar and global trade, even if I don’t agree with that at all, as it at least makes some plausible sense. If the dollar is up against trade partners, in simple math terms you might expect to see fewer US exports heading overseas – the currency translation makes our goods “more expensive.” But where that has at least a logical basis, there is none on the import side. If US goods are more expensive, then foreign goods are much cheaper, relatively, and thus with robust jobs and all that there should be a massive infusion of imports right now.

The opposite is, of course, the case, where imports continue to collapse in 2015. The resolution of the West Coast port strike, which is so often referenced in all this, amounted to a March increase of just 2.1% year-over-year. That followed February’s alarming 4.4% decline. But rather than all these cheapened imports and freely flowing ports opening up the spigot for burgeoning domestic demand, imports fell almost 6% in April! That was the worst month since March 2013 and the initial inflection off the 2012 global slowdown. If there is a robust US economy hiding in here, it is the most camouflaged in history. 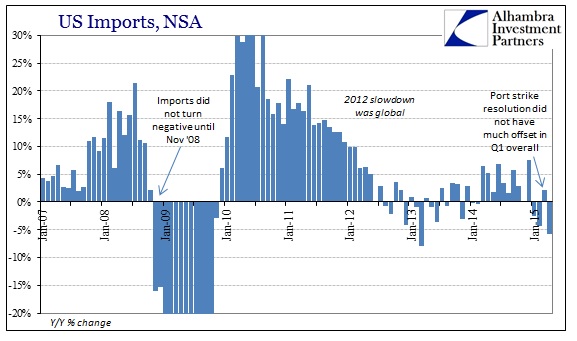 The 6-month average for overall US imports is now negative, at -0.5%, which shows significant deterioration in just 2015 alone. This really isn’t surprising, as with factory orders US imports, apart from any ideas about the dollar and currency exchange, are a part of the supply chain where recessionary sales and record high inventories are never going to lead to anything good and positive for global trade. Rather than the idea about the dollar and all that, this is yet another data point confirming the US heading toward what looks suspiciously like recession.

Since the global economy is really and truly global, a US moving in that direction is never going to be far from the rest of the world doing the same. That is why, in addition to the import figures, I don’t find the currency explanation in any way compelling. As it is, exports decline only when there are recessions – global “demand”, not currency exchanges. 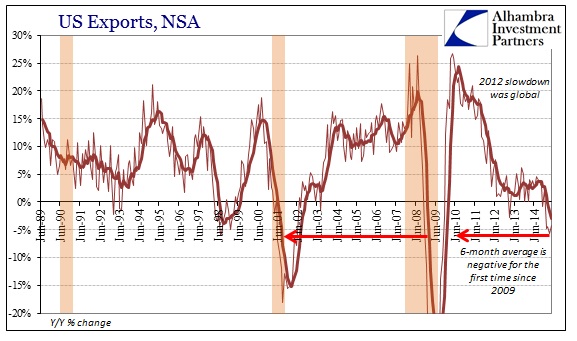 Exports were only slightly better in April, but that isn’t really significant; going from -5.7% to -4.2% is still within the same contraction paradigm. 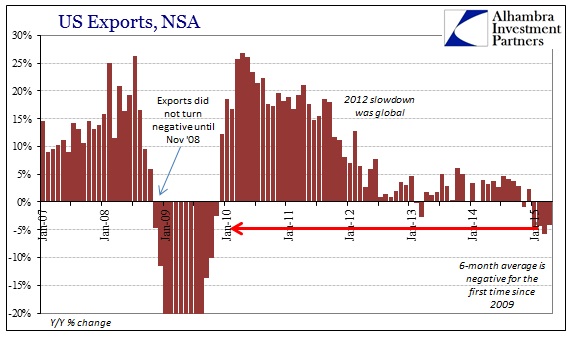 As always, none of this is surprising given data from China already released. Industrial production there was slightly better in April, but remained under 6% for the second consecutive month. The last time that happened was when US “demand” was collapsing in November and December 2008. And with the yuan floating only in a narrow range to the dollar, there is no currency translation interpretation here; only bad economy growing worse by the month. The March 30+% growth in imports was undoubtedly nothing more than a clearing of the port strike balance, as imports from China contracted again in April. 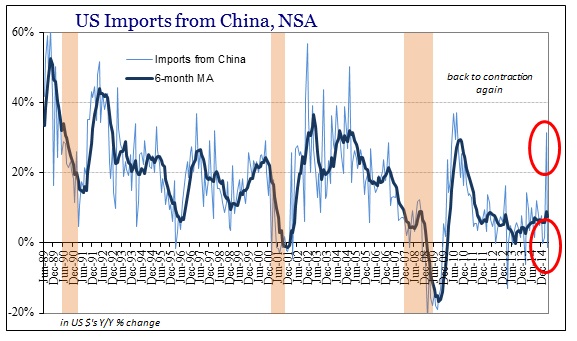 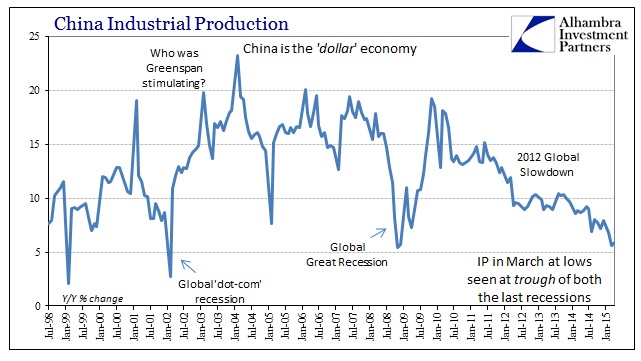 As with other accounts, there is nothing here to suggest the slump has found its rebound in April; it is, at least, positive for GDP since imports are falling faster again than exports (though, curiously, only in the seasonally-adjusted format). In short, the recessionary “feel” remains for both the US and global economy.