There is little doubt now that the “dollar” is wreaking havoc upon the global financial complex. Commodities are being battered almost everywhere, and in a manner not seen since the last version of “dollar” trouble prior to the March 18 FOMC “dovishness.” This time, however, there is almost nothing of monetary policy in the moves, just plain and pure uncertainty quickly unraveling into fear and ultimately challenging systemic liquidity.

So far, liquidity is not holding up. Copper, the primary mover and first “dollar” indication, has crashed yesterday and today more than taking out the early February lows. Today alone, copper futures are down (as of this writing) $0.135 for July delivery and $0.14 for August. 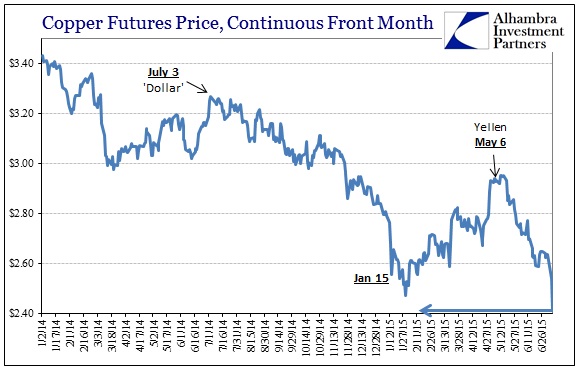 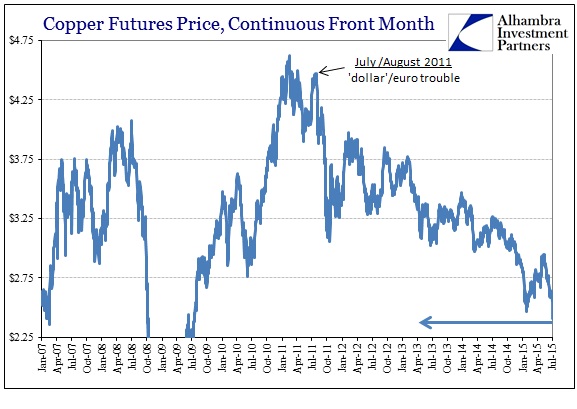 Given the “dollar” problems via copper you would expect crude to be similarly under pressure. And it is, to an extent perhaps more concerning than when the spot price was about $10 lower around March 18. The entire curve is being sold nearly uniformly, which more than suggests margin calls and widespread liquidations of at least futures positions due to them. The back end of the WTI curve is now significantly below where it was at that March inflection. 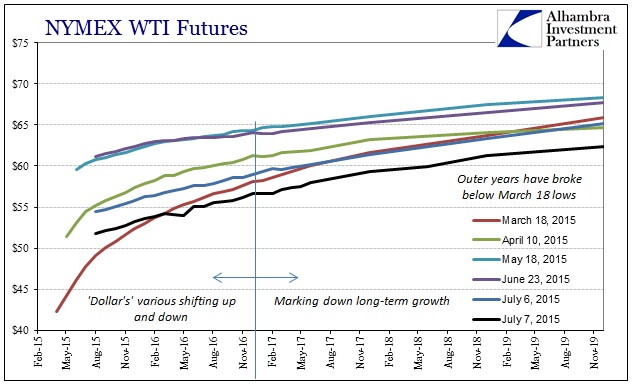 With no additional contango being built into the curve as it is sold hard, there is little to offer support about potential rebounds in pricing. Again, that would suggest a major shift in “dollar” positioning transferring quickly through commodities – “dollar” leads the economy, and this is one transmission channel. 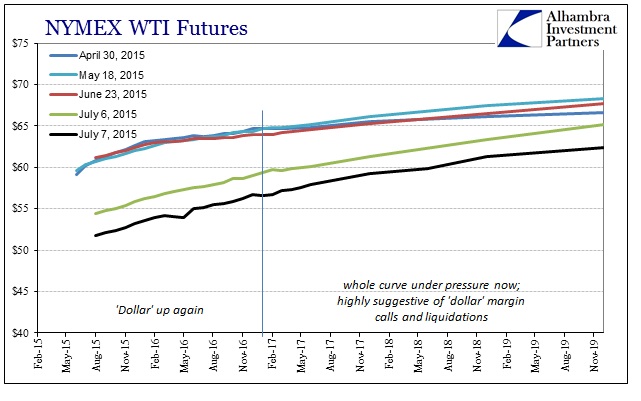 The one parcel missing from this budding and building “dollar” episode has been “flight to safety.” Typically, flight to safety isn’t really that in a comprehensive understanding, more specifically as it relates to collateral conditions. If you think back to the morning of October 15, what is being called a flash crash in UST’s I believe is more correctly interpreted as a widespread collateral call which pushed UST prices up significantly in the pre-market (futures) and at the open (cash). Huge and sustained bidding right at the open is the hallmark of collateral calls and nothing else.

The treasury market had been largely abstaining from visibly participating in this growing “dollar” re-re-adjustment of the past few weeks. In fact, early last week the 10-year yield seemed as much inclined for 2.50% as something far lower. That, however, changed on Thursday heading into both a holiday weekend and one rife with Greek and Chinese pressures. 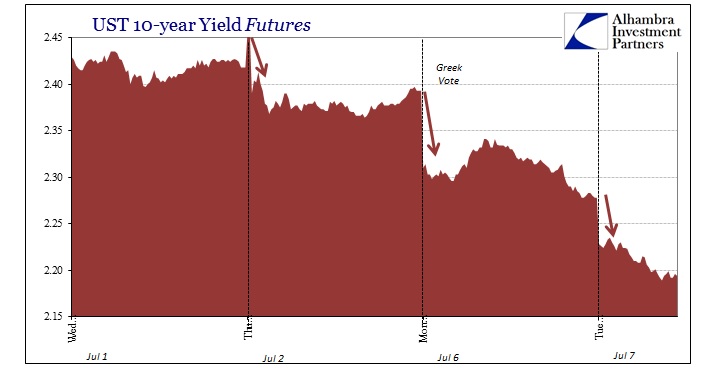 Since then, the yield has been driven lower below (as of this writing) 2.20% in heavy buying, but it is the manner in which that has occurred that I think is important especially in the current, frenzied financial context. As you can plainly see in the chart immediately above, there was heavy buying right at the start of the pre-market in each of the last three trading sessions; most especially Monday after the Greek vote. To my view, those are, in smaller versions of October 15, margin and collateral calls.

Moving cautiously before, the eurodollar system seems to have picked up momentum in the “wrong” direction. It very much appears that the “dollar” bottleneck has grown much narrower. Greek resolution is certainly possible in the next few days, though problems there are nearly intractable without massive reorientation (which is the danger). The Chinese might arrest their stock crash (“dollar” liquidity may have a role there too). If not, beware July 15.