How Are China’s Money Markets So Unaffected?

How Are China’s Money Markets So Unaffected?

There is a lot about the crash in Chinese stocks that remains out of view. Of course, margin debt persists at the forefront of the reversal but I don’t think that begins to explain the depth and speed of the downturn. The timing seems to line up with very well with official policy measures intended to slow down the stock surge, though so far only stocks there have been cast into disorder.

This is not to say that the crash isn’t significant, as it clearly remains dangerous not just for China but also in terms of upsetting what might be a delicate relationship between what has been the dominant view of investor preferences holding up asset bubbles all over the world, central bank promises, and how those have progressed from reasonably unquestioned all the way toward maybe “they don’t have any idea what they are doing.” That is the China view, it seems, as what was seemingly assured one minute has become its total opposite:

Traders unloaded 98.3 billion yuan ($15.8 billion) of shares purchased with borrowed money on the Shanghai exchange Tuesday, the 12th straight day of declines. A five-fold surge in margin debt over the 12 months through June 12 had helped propel the Shanghai index to a more than 150 percent gain…

That last quote is certainly a reasonable suggestion and forecast; stock market crashes rarely remain in isolation (October 1987 being a counterexample). If there is “systemic risk” it is singularly showing itself via stock prices. It is entirely possible that other asset classes, particularly those less liquid and widely published, are struggling to the same degree as Chinese equities, but so far there is no evidence of broad disorder especially where you would first look to find it. 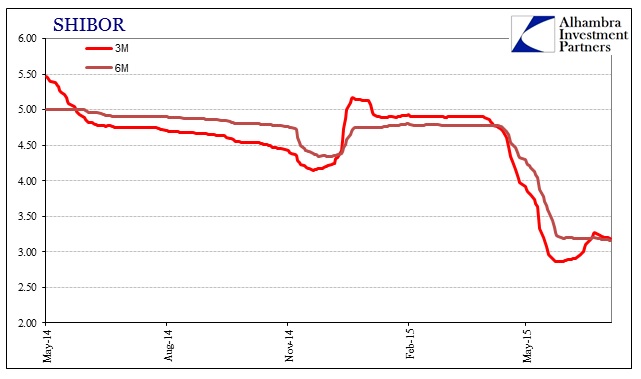 Chinese money markets remain totally calm; suspiciously calm. SHIBOR has barely budged in the past few weeks despite turmoil in stocks that suggests a major lack of liquidity. Chinese government bonds are easily traded with no apparent disruption in either direction – no firesale for liquidity and also no huge “flight to safety.” The most curious has been the yuan itself; the currency seems to be immune from almost everything dating back to the March 2015 FOMC policy statement. There has been so little volatility there that it would be seen as more than atypical even under benign conditions everywhere else. 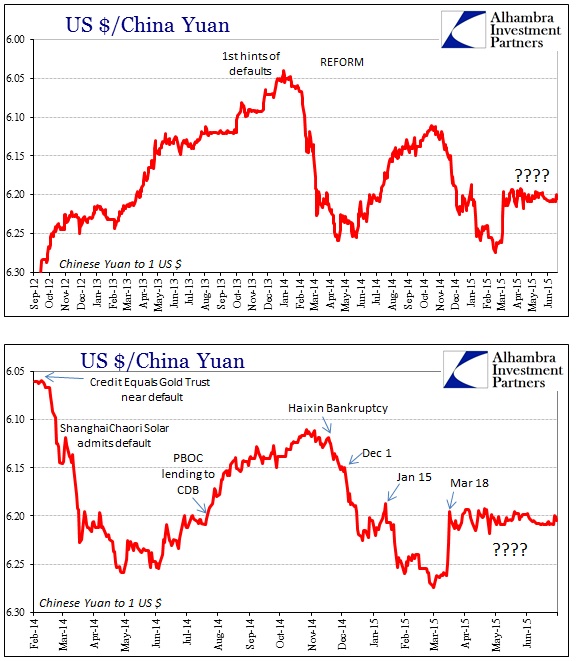 Apart from a sharp depreciation at the open (China time) on Monday, the yuan has traded in almost a straight line sideways as if pegged right around 6.205. Even in Monday trading the fearful flavor was curiously short-lived; the “dollar” surged all the way to 6.27 in early trading, and then was completely unwound shortly after New York opened. Where the yuan closed Friday at about 6.2066, dropping to 6.2697 by 2:05am ET, it was right back to 6.2091 by 8:40am ET and has stayed pretty much in that same range since. Something happened, margin calls likely, then didn’t happen?

There has been slightly more intraday volatility today and yesterday, but overall there is a magnetic tendency that simply didn’t exist prior to all the “dollar” issues before March. There are a number of possibilities here, including the PBOC draining most if not all foreign speculation out via its past efforts, but very little with which to determine exactly how this placidness remains. Chinese banks, for the most part, are unexposed to equities and even margin debt directly, so there is no straight pathology to transmit liquidity distress but that is not the same thing as no notice whatsoever.

If this was the case of stocks being stocks then I wouldn’t expect the PBOC, given its prior reform stance, to be engaging in almost panicky behavior. And that may, in the end, be the most important clue about what is going on. In other words, it may be that the PBOC is doing far more than we can see, quietly, as they are clearly worried, and should be, about how disorderly bubbles spread out the longer the depressive nature remains momentous. The Chinese economy is already in rough shape and financial markets away from stocks have been radically altered through the past year and a half.

It’s not enough to notice how this is odd, as it appears, given wider circumstances, to be almost odd with a purpose. Whenever uncertainties grew about China’s reform, especially “allowing” defaults, “dollar” supplies tightened significantly and the yuan devalued. Given the fragility of the current situation, you can understand why, possibly, the PBOC might not want too much to get so far out of hand and so they may be supplying “dollars” to maintain orderly money markets both onshore and off. Given the plunge in import activity they may not really need to supply all that much, particularly in combination with prior and intended outflows as they effectively tried to chase speculators out of the country. Perhaps they did too much?

Whatever the case may ultimately be, it bears close scrutiny for several reasons. First, if this is correct (a very big “if”) then the financial system in China is worse, far worse, than it appears. Second, central bank attempts such as this are extremely finite as they are, over time, hugely inefficient. The PBOC might just be throwing everything in its arsenal at the financial system short of open “flood” declarations (which are themselves destabilizing; declaring an open emergency is as much confirmation of how bad everything is) trying to calm everything down in order to reassess.

We live in very interesting times, where even the most tranquil and unruffled markets are the most suspicious.