The Fuss About Wages Is The Fuss

The Fuss About Wages Is The Fuss

The latest FOMC policy statement was dominated by a single, added word; “some.” As far as actual policy maneuvers I doubt it will make much of a difference, but it certainly adds more flavor to the growing evidence the US economy isn’t anywhere near close to what it should have been by now. In other words, even the mainstream economic narrative has shifted significantly.

I also have little doubt that the Fed was aware (either directly or through its own, parallel modeling) that wages would so disappoint. The same week that “some” goes into the policy statement about labor “improvement” the BLS’s Employment Cost Index (ECI), a gauge commonly used by the FOMC, rises by the smallest amount in 33 years. Coincidences are common but there is clear purpose here.

Not for lack of trying, but the US “boom” has evaporated once more into “it’s just around the corner.” The New York Times was typical to that effect:

Labor costs in the United States recorded their smallest increase in 33 years during the second quarter as workers were paid less in commissions and bonuses. The tiny gain appeared to be a temporary wage growth setback against the backdrop of diminishing labor market slack.

The rest of the article was spent detailing really how serious this report was in suggesting something not a “temporary wage growth setback.” When the ECI rose in Q1, it was as much commissions and bonuses but nobody had much to say about that then, suggesting which part was actually temporary.

In the second quarter, wages and salaries, which account for 70 percent of employment costs, rose 0.2 percent. That was also the smallest increase on record.

At MarketWatch, there was more realism in the analysis as it should be very clear by now that the “anomalies” in all these economic accounts are not when they are low.

The slowdown comes after first-quarter data had suggested wage growth had picked up perceptibly from the stagnant trend of several years. 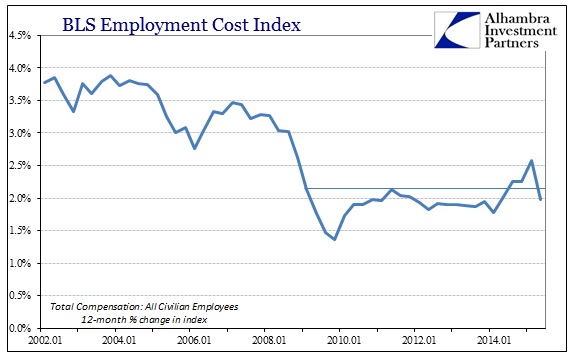 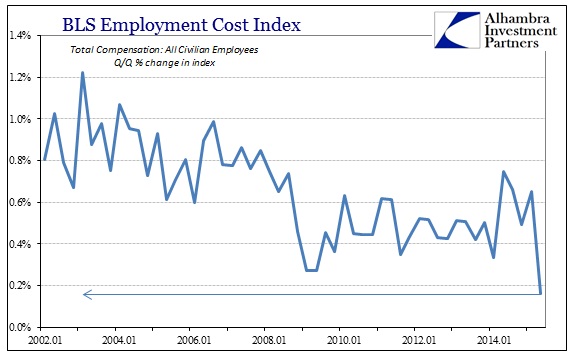 A trend whereby wages stagnate for several years, rise for one or two quarters, and then fall back again suggests peculiarity only on the upside. That means each of these higher readings, which are used heavily for extrapolation, are really worthless without broad corroboration in both vertical accounting and horizontal time comparisons. Some of this ECI data, including subcomponents, could be interpreted as businesses reverting not just toward prior stagnation but even active cost cutting – which would be more in line with indications, especially capex, from elsewhere.

At the very least, the increase in Q1 more than suggested a “give back” in Q2 as it was, again, commissions and bonuses that were largely responsible for that increase. But that reversion is masking other drawdowns in this version of labor market price. For instance, benefits paid to private industry workers contracted for only the second time in the 2000’s. 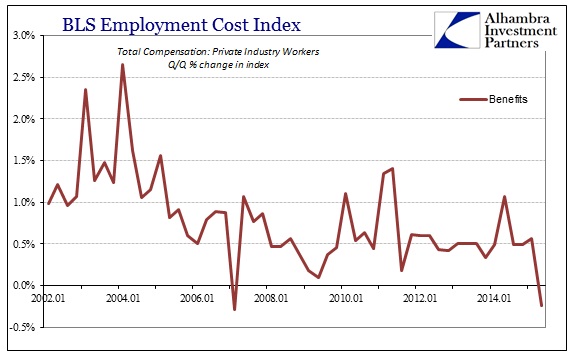 “This is sure to bother the more dovish contingent on the FOMC, with the thinking being that wage gains ought to be doing better if the labor market were really approaching full capacity,” said Josh Shapiro, chief U.S. economist at MFR Inc.

That is exactly the sentiment Janet Yellen delivered a few weeks ago. If the economy had experienced, and still were in the midst of, the “best jobs market in decades” this wage and income figuring would be non-debatable. Both wages and benefits would be surging as labor utilization would be needed to keep up with revenue. And there’s the part that refutes all of this; revenue, broadly speaking, has been atrocious for years and has only gotten worse more recently. Hiring robustly and paying a lot more to do it just doesn’t make sense with an unimpressive revenue environment, and certainly not where revenue is about to decline significantly and not rebound any time soon:

Analysts are typically overly optimistic, so for them not to expect revenue to re-align with the recovery narrative for a whole year amounts to a serious deviation for 2015. It would make far more sense that companies would be looking to cut costs wherever they can; until that isn’t enough and they have to appeal more bluntly. The negative trends of recession start with a scalpel and ultimately find it nowhere near enough, ditching trimming for pure blood-letting.

On balance, there is much more to be concerned with here as far as wages and economy are concerned. As I wrote at the outset, this really isn’t news, as what is significant is that economists are finally starting to see it. The “debate” of which economy is real and actual, what the people see and the sharply different version held out by the orthodoxy and “reported” in the media, is being decided in the unfortunate favor.

“Disappointing report? Yes. Despite a tighter labor market, and all of the stories about pay increases at various large firms, wage growth is not picking up meaningfully,” said Jennifer Lee, senior economist at BMO Capital Markets, in a research note.

If there is no wage growth there is no economic expansion; it really is that simple. A recovery or even boom would be almost uniformly indisputable; you wouldn’t need a short and really minor upturn in some ECI in order to justify how you think conditions have already improved to what everyone has been expecting for half a decade. When even those few positive accounts turn against, such as GDP revisions and the seriously troubling implications of that benchmark change, the entire narrative departs leaving only questions as to what has been reported for these past few years (not observation).

There really can be no “greatest payroll expansion in decades” without some notice of it somewhere else. Jobs are not the answer; they are just one element in what is thought toward the recovery answer. In other words, jobs lead to wages which leads to spending (the blight of “aggregate demand”), but there is only limited veracity for Step 1, jobs, and now really none of Step 2 and worse for Step 3. Beyond giving up on last year’s certainty, there is a deeper reconciliation needed here, namely that demand “stimulus” doesn’t seem to get much of anywhere no matter how much is applied. That should call into question “stimulus” in that regard, but further resolving the idea of this demand focus to begin with – it really is nothing more than faking a recovery and hoping people are just too dumb to notice the difference. They did, but economists didn’t until now.