As stocks selloff today, so too does the junk bubble. I think the implication traces back to the Asian “dollar” and the unsteady state of wholesale finance in that part of the eurodollar system (while contemplating the potential for mitosis to have occurred there at some point in the recent past, likely 2012). Junk prices not only remain depressed but are now moving in the wrong direction again, accumulating further toward the critical breaking point (of functional leverage).

It has become alarmingly typical that the S&P/LSTA Leveraged Loan Index will go for several days before update. The latest figures are for September 18, where the market value remains under 950 and far too close to the August 26 low. 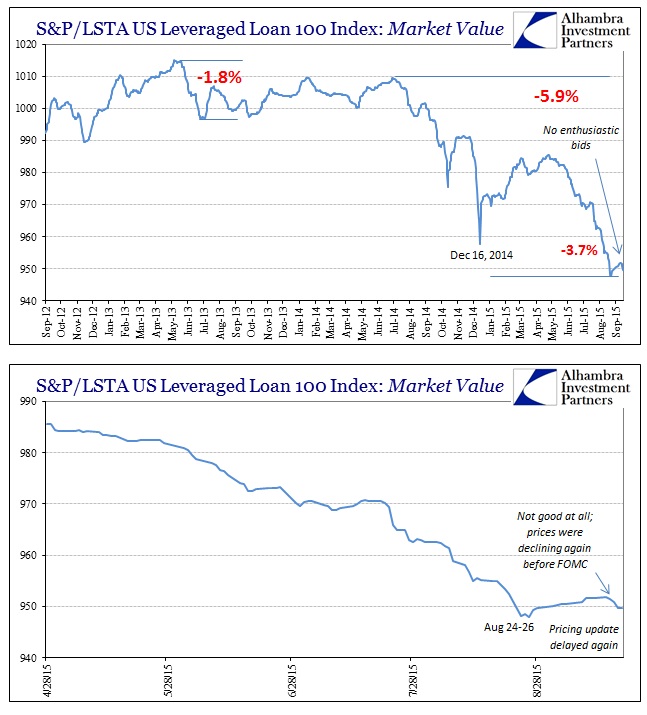 That persistence is widespread, as many of the junk prices enjoyed very little if any renaissance after August’s liquidation only to have found (recently) renewed selling interest. From retail to institutional, the junk bubble is perched quite precariously. 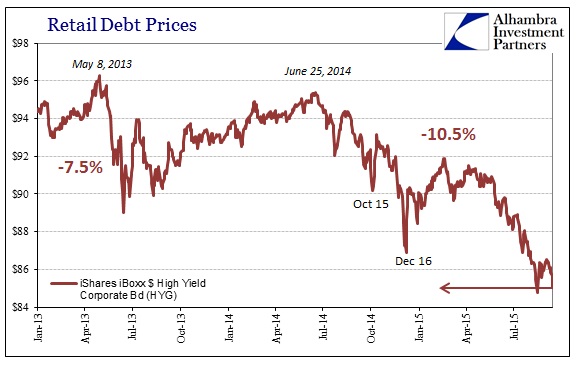 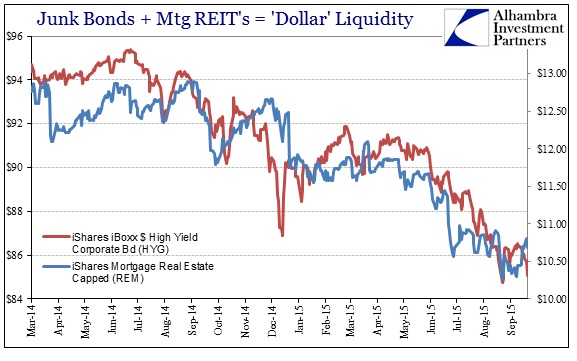 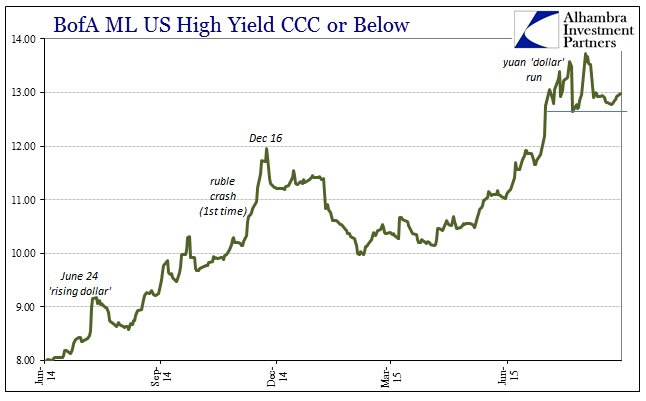 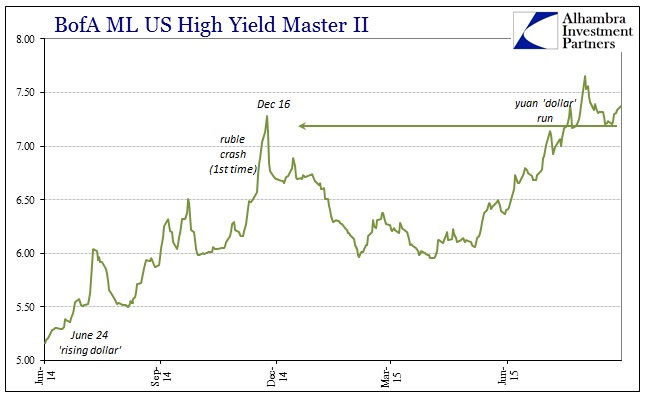 Maybe optimism is in the eye of the beholder, as clearly the junk pricing levels holding somewhat steady to slightly lower are far better than the “dollar’s” continued assault on places like Brazil. It is also possible that Brazil’s currency has absorbed so much real economic damage from the “dollar” (and “its” global recession) to this point that it has been set on its own way to the currency netherworld. 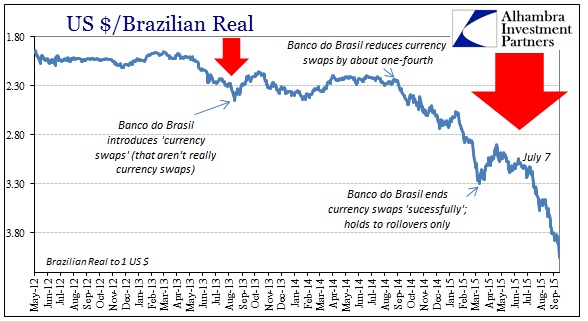 In either case, it doesn’t matter much in terms of implications. The “dollar” and wholesale disruption is not some fantasy played out on computer screens, as it is a very real and very negative economic case. So far, that worst case appeared to be singularly foreign for far too many, only to be blindsided in late August. I think that is the continued point and purpose of where junk debt and all these “dollar” indications take the world – a downside that is just now starting to be appreciated as something greater than triviality or even small potential.

This is true beyond even the narrow cases where such correlations might seem easily explained and dismissed (in the more orthodox view of “transitory”). For instance, the Russian ruble went into severe crisis last December only to have its central bank “bail out” the currency via harsh interest rate measures. While the Central Bank of Russia was lauded for its “effectiveness”, and now Russian recession, the ruble has instead found itself back in the throes of confusion. Just in that description alone you might recognize the outline of the “dollar” waves as practiced between late 2014/early 2015 and that which began toward the middle of this year.

In specific correlation, however, the ruble finds itself in almost exact patterning of the US junk bubble (or at least one pricing view of it). On first glance, that makes sense given that the surface commonality is and has been oil prices. With so much junk debt tied to the energy sector it seems good enough to view energy as the animating factor for both Russia and American high yield. 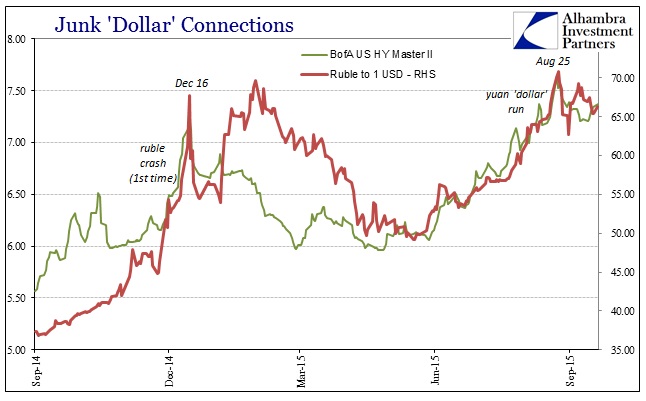 The specific blowouts at December 16, 2014, and August 25, 2015, might confirm as much, as well as the apparent “reluctance” for these prices to settle down once more. But what we know of the broader corporate bubble dispels that narrow interpretation; especially in this latest wave. 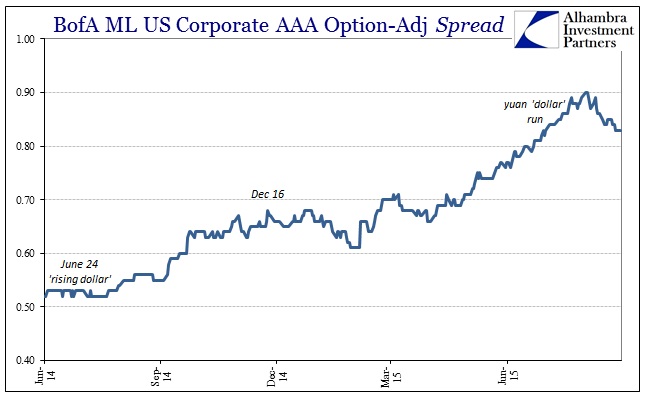 It is that progression tied to the energy correlation that contains the most dangerous assessments. In other words, you might make the case that it was energy and oil prices causing the December outbreak, but the August version was in no way energy alone. There is a rather obvious progression here, where the correlation between US junk and the ruble remains but now includes some significant part of the broader asset markets (dollar and foreign) sucked into the “dollar’s” vortex. That would suggest, quite strongly, that energy isn’t the problem, per se, but rather that it is the first warning and the leading edge of something much greater.

That much we know easily from just a cursory review; global stocks weren’t much affected at the December outbreak (unlike October 15) but almost everything on this earth was on August 24. The connotation of junk prices (and currencies) in this pattern is decidedly negative. Just as an economic recovery helps fortify the economy against the next business cycle, a respite in the downward spiral of a systemic liquidation aids in the system’s ability to weather the next (should one arise). Like the lack of economic recovery after the Great Recession produces no small wonder about the downside should another “cycle” begin (setting aside the potential supercycle problem), the inability to solicit extended bids for at least bargains in junk leaves the bubble quite vulnerable should “something” spark the next wave (or the continuation of the last one).

Put together, you have that weakened systemic framework set against “something big” working its way through the “dollar”, all the while sentiment is shifting from “it’s impossible as only transitory” to at least “what is going on here?” The trading patterns all over in September suggest that that latter question is being asked without finding close to satisfactory answers. 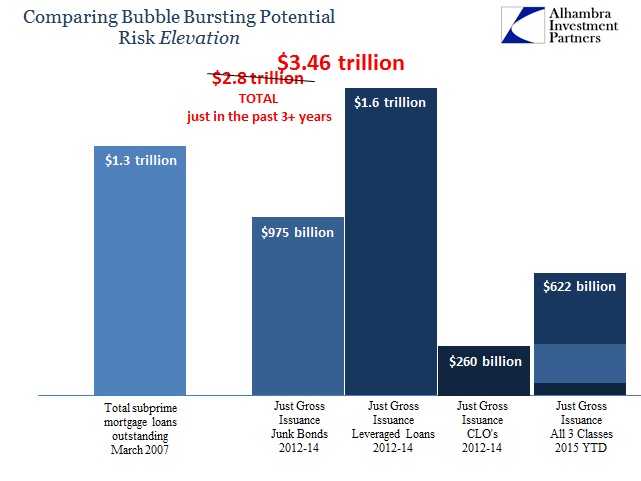