Consumers Borrow But Ports Grow Quiet, A Combination That Does Not Lead Anywhere Good

Consumers Borrow But Ports Grow Quiet, A Combination That Does Not Lead Anywhere Good

The Fed has many problems with its attempt to convince the world that it has itself fulfilled its recovery mission. That self-reflected “mandate” is meant to include a masterful revisit to prior American infatuation with debt and credit. There was no more visible and visceral demonstration of those terms than the middle 2000’s, and it is the intent of monetary policy to get Americans back there. In 2015, however, in the few areas where that has been found it does not identify monetary success but rather demonstrates even more how the theory never came close.

Revolving credit has just surged this year, particularly starting in March. The numbers are staggering, as revolving credit balances, estimated and reported by the Federal Reserve itself, have jumped by more than $39 billion in the seven months ending with the update for September. By comparison, from the start of 2012 until February 2015, revolving credit balances expanded by about $44 billion; in just seven months this year consumers have indebted themselves by almost as much as they had in the more than three years before March. 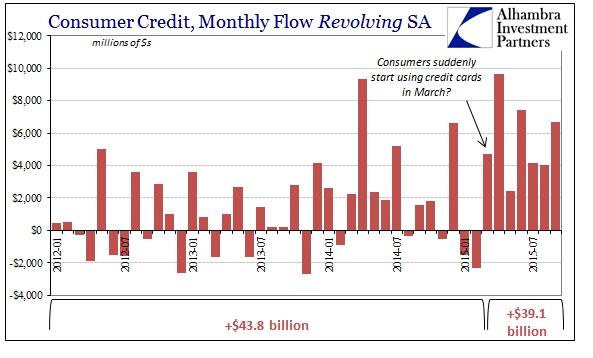 Economists are, as you would expect, nearly ecstatic over the impoverishment. To them, it signals the final capitulation of consumers to that which Janet Yellen has been professing since her term began. But there is a huge problem with that view; if consumers are borrowing, what are they doing with the balances?

For the first time in at least a decade, imports fell in both September and October at each of the three busiest U.S. seaports, according to data from trade researcher Zepol Corp. analyzed by The Wall Street Journal. Combined, imports at the container terminals at the ports of Los Angeles, Long Beach, Calif. and around New York harbor, which handle just over half of the goods entering the country by sea, fell by just over 10% between August and October.

The declines came during a stretch from late summer to early fall known in the transportation world as peak shipping season, when cargo volumes typically surge through U.S. ports. It is a crucial few months for the U.S. economy as well: High import volumes can signal a confident view on the economy among retailers and manufacturers, while fears of a slowdown grow when ports are quiet.

The mainstream wishes to belittle the “manufacturing recession” as if it is in and of itself with no major economic connotations. Further, we know retail sales have been among the worst in the entire quarter-century of data, “bested” in consumer atrocity only by the depths of the Great Recession, in exactly this period where revolving, credit card usage has spiked. 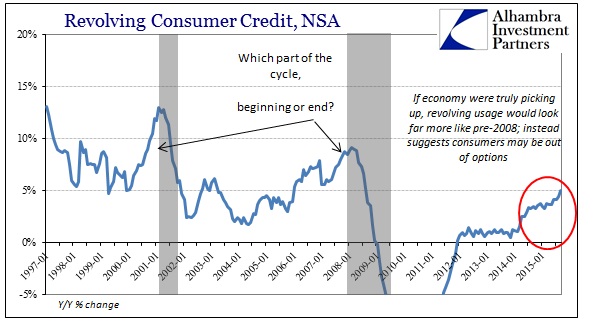 It isn’t just importations, either, though that already confounds orthodox understanding as far as what should be happening in trade because of the relative “cheapness” via the dollar exchange. Trucking and shipping companies internally have been vocal in their questioning the dominant, happy rhetoric. In short, if consumers are in full indebted throat upon an orthodox rebirth of the mid-2000’s there isn’t anything out in the real economy to suggest it. There aren’t swelling quantities of goods being moved, fewer in fact, and even less as far as counted spending. There has been a tendency to suggest that consumers, if avoiding goods, have been binging upon services, but they sure aren’t going to be using their credit cards to pay their health insurance premiums or bank fees.

Instead, this discontinuity can only be consistent where consumers are completely out of options. If there are noticeably fewer goods being shipped here and within here, the US, and borrowing has just exploded at the same exact time then it is rather easy to conclude far more of full recession than recovery.

That is a point that is further bolstered by the continuing surge in auto loans (as well as student loans via the federal government). In other words, overall manufacturing is, to be blunt, already in the toilet to which even economists recognize despite the fact that auto credit remains at the heart of a relatively robust auto sector; what does that say about the real nastiness in manufacturing apart from autos? What does it suggest about consumers where student loans aren’t being applied toward the labor participation problem? 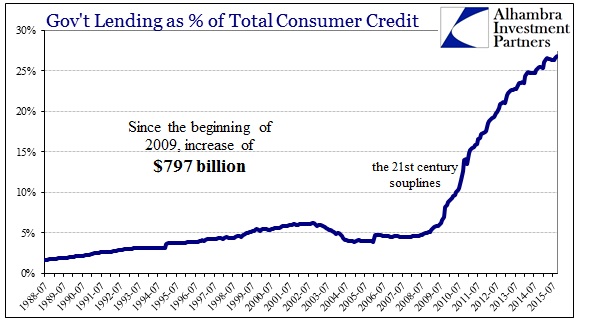 As it is, economists still can’t make any sense of it since they are convinced (though becoming, significantly enough, less so as you can see below) of Yellen’s forthrightness.

Economists are divided as to whether the peak season slump signals a short-term hiccup for the U.S. economy, or marks the start of a sustained period of weakness. Some say the slump is being driven by businesses that have cut back on imports because of a weak economic outlook, which could point to sluggish global growth ahead. Others say it is a side effect of a massive inventory buildup that took place earlier in the year.

Those are actually two parts of the same process, not competing explanations. If businesses have indeed started to cut back, then inventory is the marginal driving force derived from lower sales that have driven inventory to such heights. Add to that such “sluggish” outlook the indebting nature of consumers just to keep the economy in a bad state rather than something obviously worse and it is no wonder commodities and money markets are speaking to unthinkable contradiction.

In short, there is no way to reconcile the sudden surge in credit card usage with this magnitude of reduced trade in goods that ends with the US on a surging plane of booming vigor. The “dollar” warned of such behavior and inconsistency starting in the middle of last year, and come to find out the pieces are fitting and corroborating that warning more and more.