To this point, I have refrained from presenting Morgan Stanley’s balance sheet reporting on gross derivative exposures because, quite frankly, it fits too perfectly. The bank follows the wholesale “dollar” narrative so closely that it almost seems too good (bad for the financialized economy) to be true, and thus almost diminishes the value of the evidence by extension. Because of that, I have focused mainly on the other dealers as they mostly apply, and thus largely present compelling corroborative, anecdotal evidence.

Morgan Stanley has now forced itself into the conversation, and again it is almost too perfect. Yesterday, the Wall Street Journal reported rumors that the bank is about to tear into, what else, FICC; deeply:

Morgan Stanley plans to slash hundreds of jobs from its debt and currencies division, people familiar with the matter said, revealing that the Wall Street firm believes that a monthslong slump in trading revenue may persist.

It wasn’t necessarily a surprise given that the firm reported 42% drop in FICC revenue in Q3. Thus, as with all the other dealers, cutting resources dedicated to “bond trading” is a statement about the state of eurodollar money supply and the profitability that once dominated each firm. These banks will ride out temporary revenue shifts and macro environments that may leave income statements gashed in any particular quarter or two, but to offer huge reductions across the firm’s global trading platform is a nod toward permanency.

As per usual, the Journal is quite careful to note the role of regulations, but CEO James Gorman was far more (perfectly) blunt. This is, as always, about profit opportunity and that ship has sailed for the foreseeable future.

“The trick for us is to size our business appropriately to what we think the fee pool is,” he [Gorman] said at the conference. While trying to gauge that, the investment bank needs to keep the unit “credibly sized” to complete globally, and “make sure we have enough flex or leverage that when the markets recover, which we do think they’ll recover, you’ll be able to participate in the upside of that,” he said. [emphasis added]

In other words, leaving little doubt, when “the upside of that” does happen (a big if, as these cuts more than suggest) Morgan Stanley as Deutsche Bank or Credit Suisse won’t care about regulatory charges and capital efficiency so much as that profit opportunity. Those regulatory hurdles and greater inefficiencies will all still be there and apply, but won’t deter the bank, or any bank, for the trouble. What is lacking, then, is that profit opportunity; i.e., the recovery.

Since this is Morgan Stanley’s actual view of the situation, that brings upon monetary policy. As stated at the outset, no firm has traversed monetary policy and Bernanke QE’s quite like MS. The firm’s gross exposures in especially interest rate swaps leave no ambiguity; they have clearly been betting on monetary policy with their balance sheet size. Again, it is honestly almost too impeccably compliant, such is the obvious nature of their interests: 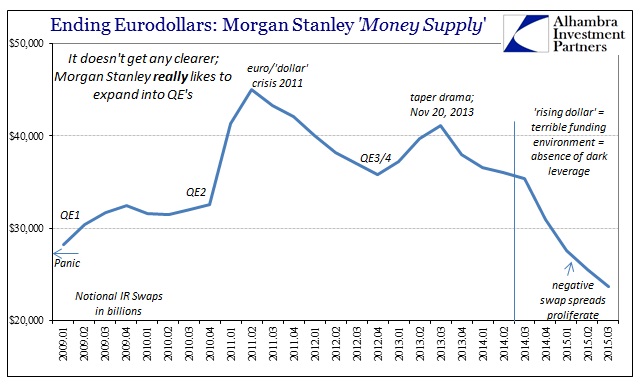 At each QE, the bank responds by opening the derivative spigots (only slightly metaphorically) only to find them slammed shut at each intervening market rejection. The most dramatic was the huge increase after QE2 began, as total gross notionals exploded by nearly a third in Q1 2011 alone; only to find that a serious miscalculation once the eurodollar/euro world just a few months later in 2011 turned rather dangerous once more. The balance sheet contraction thereafter was temporarily “solved” by QE3 and then QE4, only to be dismissed yet again later in 2013, particularly with whatever happened about November 20, 2013, and the dealer upheaval of that day. It has been steadily downhill ever since, with an obvious intensification of the retreat in Q3 last year.

That general trajectory extends at least partially into credit derivatives, except that after 2011 there was truly no going back. QE only “worked” once for CDS. 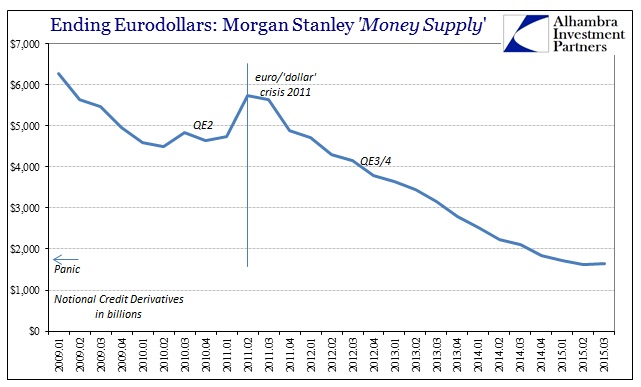 If Morgan Stanley’s FICC units can only make money when QE is pressing on prices and spreads (or so everyone might believe), then what does it say about QE in Morgan Stanley’s behavior after Q3 2013, especially now when, by cutting a quarter of the staff, that places an exclamation upon the withdrawal? QE was supposed to create a recovery and thus great profit opportunity, but the absence of QE leaves banks to only leave, meaning no profit and thus truly no recovery. This financialism becomes the economic misimpression that “unexpectedly” showed up this year to spoil the self-congratulatory party as the FOMC tries over and over for a lift off.

As this point is pressed home over and over, as each bank cuts back and restructures against FICC, the “dollar” only cuts deeper and deeper into the financialized global economy and makes it only less opportune for what balance sheet resources remain; and round and round we go. The media cannot grasp as to why swap spreads would not only be negative, but quite negative and quite widespread and persistent, yet here it is staring them right in the face. A negative swap spread holds no meaning except to say that there is great imbalance in balance sheet factors on offer to carry out the financial factors necessary for the wholesale system to remain at least steady. You don’t have to know anything about interest rate swaps or dealer activities to see that plainly from what these banks report on their (off) balance sheets and in their own words.

But because economics works only backwards, starting from “next year’s” absolutely certain recovery and boom, none of this makes sense to it and its practitioners. There is, rather, no recovery because the QE “bursts” of eurodollar-ism were not just temporary, they were, in fact, a lie. The banks themselves are blatantly declaring it as such, and are quite open and honest, for once, in calling these shots. There is no mystery here, no unsolvable and complex financial puzzle to tangle about; the eurodollar system is increasingly drifting away and there is no stopping it. You have no need to take my word for it.