While some are shocked that China may have “used” a huge amount of “reserves” in November, that is only because so many myths and anachronisms continue to abound in the mainstream and beyond. Any conversation about forex in the context of central banks and national government agencies is one that still views money from a traditional standpoint – as if these places have piles of currency sitting in a vault or in some kind of standard deposit account. Even where securities are recognized as the mainstay of that accumulation, it still seems to reckon some kind of sentimentalist pursuit.

For one, we have no idea to what China’s “reserves” actually belong; they don’t report much information and what we do have on this end is often quite incomplete. The TIC figures, for example, which show China’s domestic holdings in one sense don’t align with the dramatic swings in Belgium. Belgium is notable for many reasons but particularly the home location of Euroclear which is Europe’s primary derivatives clearinghouse (eurodollar primary among the “products” offered such clearing). Thus, if China’s holdings of UST’s diminish in Belgium then it isn’t at all obvious that they are “selling UST’s”; in fact, contrarily, it is far more likely that they are posting collateral for forward transactions, swaps and the like. 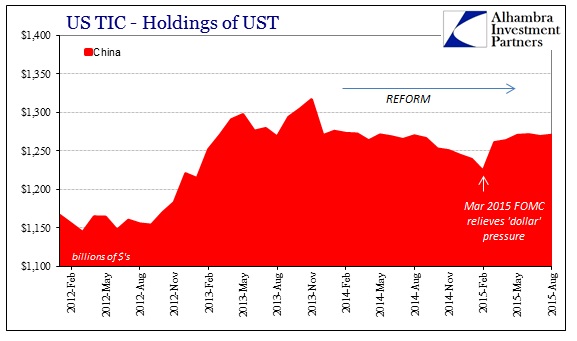 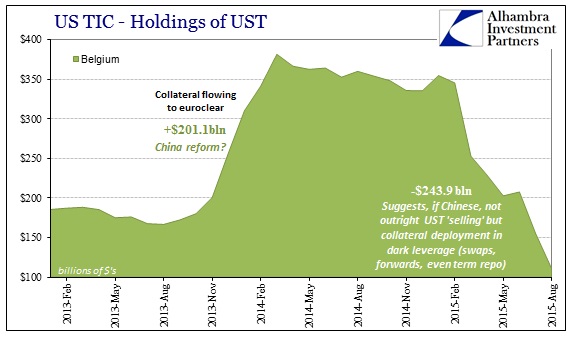 To the mainstream, that cannot be taken into account for the orthodox view of global “money” and the dollar as some kind of formal reserve system. In fact, the dollar never truly gained reserve status, as even by 1971 the eurodollar and a credit-based reserve currency system had already superseded it. Those two words are the most important in monetary context since gold, and yet it is treated as if it is not the case.

When China reported a great reduction in its “capital outflows” for October, almost everyone was quick to declare an end to the irregularity. Not accounting for what the PBOC was likely doing in the wholesale arena, the credit-based reserve system, made for such ill-suited interpretation. From this perspective, the renewed problems in November are not surprising but simple math – there is only so much that can be done even in the short run to “hide” “dollar” problems.

Even though that is the true nature of the growing calamity here, it is the furthest thing from the “expert” commentary that still sees China with actual “reserves”:

All the evidence suggests that money has been flowing out of the country at a rapid pace since August when China stunned the world with a surprise devaluation of its currency, the yuan. The Chinese government simply declared that all of a sudden, the yuan was worth less.

That caused a major selloff in the Chinese stock market and worries that China’s economy is slowing down even more than the government is letting on.

When money leaves China, it means people are trading their yuan for dollars, euros and other currency. That makes the yuan fall even further in value.

Again, like Plato’s Parable of the Cave, most people are groping for some explanation of the wholesale shadows they observe but clearly do not understand; that is why so much commentary amounts to obvious confusion and contradiction. Because the “government devalued the yuan” that caused the stock crash? First of all, that’s plain nonsense since the stock market in China peaked in the middle of June two months before the “devaluation.” Second, if all this yuan is “leaving China” then where has it gone? Surely it would have shown up somewhere by now, as this is typical in conventional thinking about even “hot money” and related forex concepts. In this view, forex can never be destroyed, only transferred.

In other places, the sense of China’s “outflows” is driven completely by expectations for devaluation itself.

China’s capital outflow accelerated in November, forcing the Chinese government to more aggressively prop up the yuan via interventions, according to an estimate from Capital Economics.

“The pick-up in capital outflows appears to have been predominantly driven by increased expectations for renminbi depreciation,” said Julian Evans-Pritchard, a China economist at Capital Economics.

But this, too, makes no sense. If “outflows” are occurring because the Chinese fear a dramatically slowing economy, then the PBOC’s efforts to “prop up the yuan via interventions” only makes that more likely; the internal liquidity dynamics of the forex, wholesale interaction means exactly that. By reducing the forex asset balances, in whatever derivative or plain form, the PBOC is guaranteeing a tightened internal yuan liquidity environment by direct virtue of its own systemic arrangement, and thus further and further economic and financial difficulties. This part is indisputable as only a few minutes inside the PBOC’s balance sheet can and does confirm. 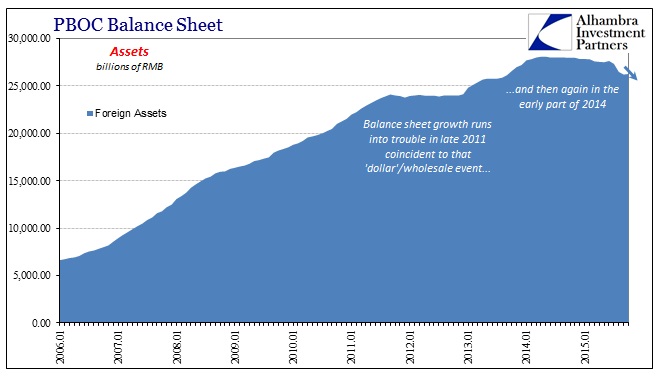 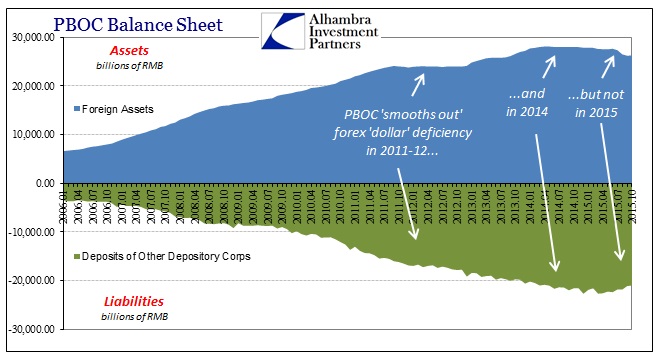 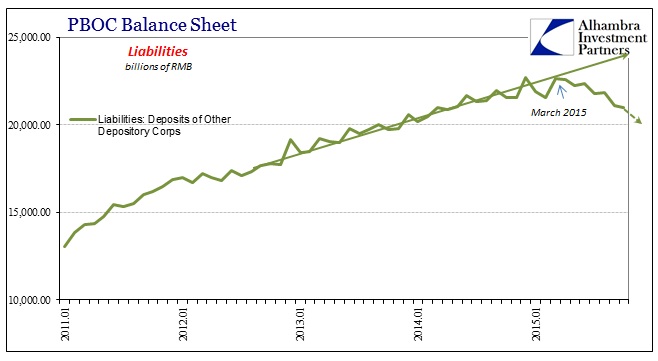 The PBOC is not intervening by “selling UST” in order to “prop up the yuan” at all, but rather trying to maintain a steady supply of global currency for its own point of access – the credit-based reserve “dollar” currency. The central bank is attempting to fill a void of created by a foreign, market imbalance. Therefore, the price of that is incorporated into the exchange rate of the yuan to the dollar. A further depreciation in the yuan makes (means) funding more expensive, thus the PBOC has a great interest in trying to keep it from getting too far out of hand (while balancing the need of China’s banks to bid even at expensive funding costs for “dollar” rollovers).

The events of mid-August were a huge break on that account; China’s banks met a wall where rollovers in “dollars” were no longer permissible at the PBOC’s manipulated exchange rate. The central bank either had to supply the equivalent of the “dollar” drain itself, let China’s banks default on “dollar” rollovers and risk being catastrophically shut out of the credit-based reserve currency system, or allow China’s “dollar short” to be funded at whatever increasing cost necessary (“devaluation”). They chose the third option because it was the only realistic alternative, and still they endured great and ongoing calamity. 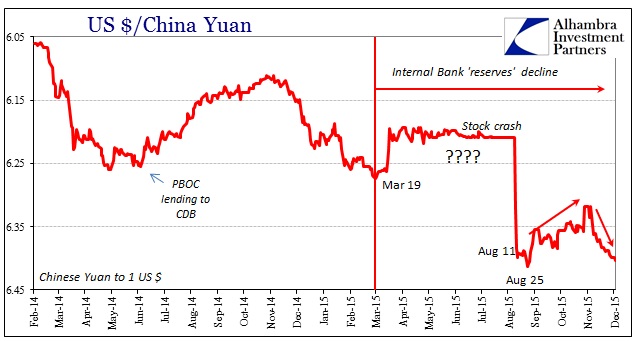 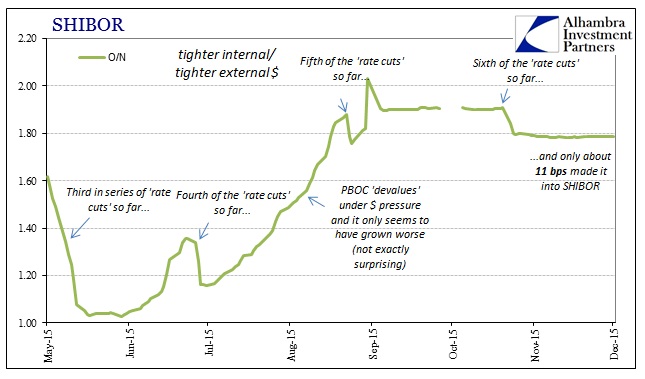 If this were simply a determined “devaluation” rather than being forced into picking the least worst option that would have been the end of it – as almost every China expert declared after October. That it is still ongoing across even the visible Chinese funding spectrum (SHIBOR, the yuan’s middle/reference rate drift of late) is that wholesale issue in light of the credit-based reserve currency system under global strain.

Again, if China was under threat and action of “outflows”, where are they? They should have shown up somewhere by now, and since this “outflow” has not been limited to just China, that’s a lot of “currency” that is supremely missing. Instead, “deflation” has gripped the globe as has the increasing occurrence of recession and recession-like levels of activity; as if the global “money supply” has been contracting. 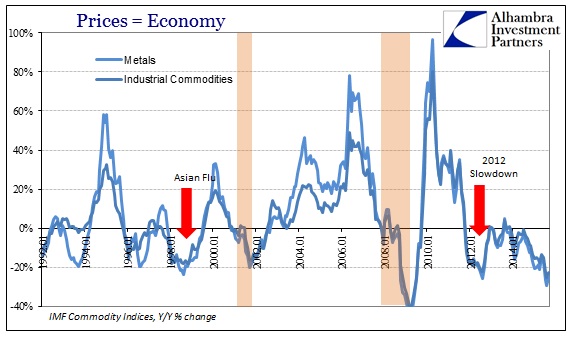 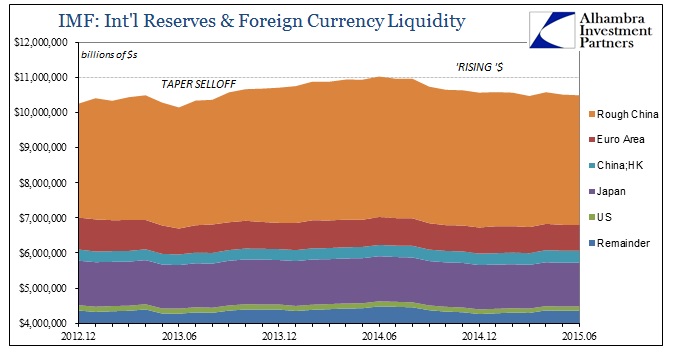 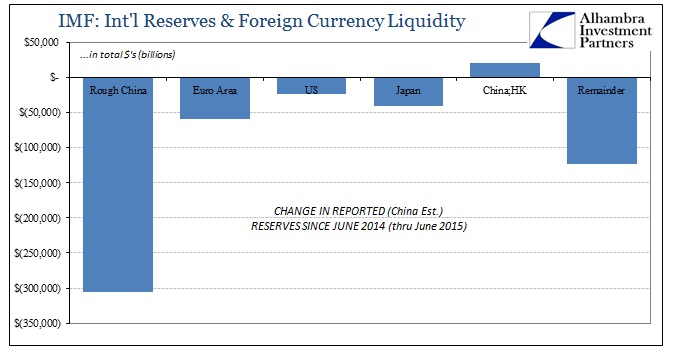 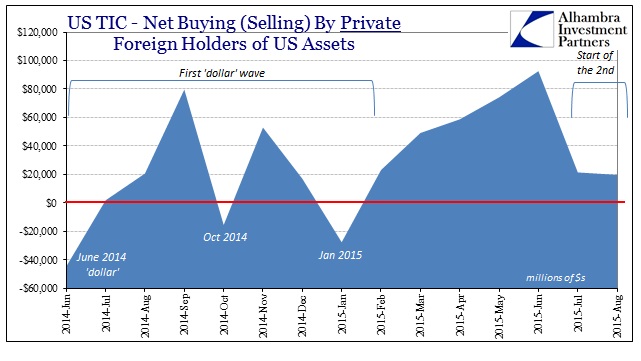 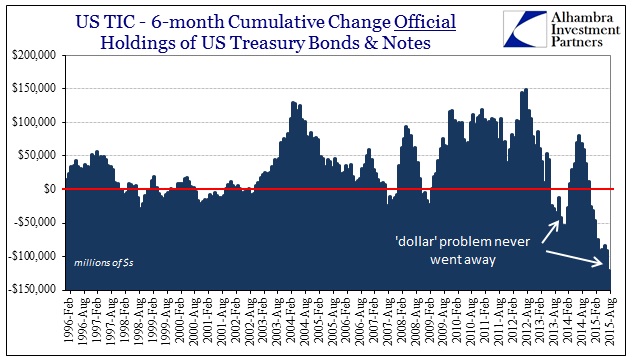 That is the main point about China, namely that in a credit-based reserve currency system global money can be destroyed rather than being redeployed somewhere else. In fact, dependent upon balance sheet conditions in the aggregate, the credit-based reserve dollar can just disappear at a moment’s notice if balance sheets so contract themselves. Given the plethora of indications that big banks, the actual eurodollar supply, have been doing just that, none of this should truly be misunderstood let alone surprising.