NIRP Has Already Been Proven

NIRP Has Already Been Proven

The orthodox intention behind NIRP is that by taxing idle “money” it will make banks put it to use. Setting aside relevant objections about what bank “reserves” actually are, negative nominal rates used in this fashion just don’t work that way. This is not an arguable point; it has been proven across 618 days or just shy of 21 months. The ECB set the deposit rate, the European equivalent of IOER, to -10 bps starting June 10, 2014. It has been all downhill since.

What has occurred has not been banks acting afflicted by the taxing pressure of negative nominal rates, but rather banks simply shifting to other forms of similar idleness. As the ECB has further intended that this “money” get to work with a lower nominal rate on the deposit account, now at -30 bps, all that has happened is the entire suite of Euribor maturities reside currently below zero – all the way out to 12 months. 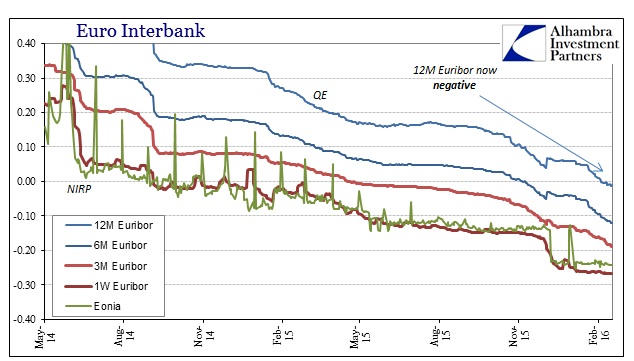 When the ECB started NIRP, 12-month Euribor was at 52.9 bps; 3-month at 26.4 bps; one-week at 15.5 bps; and Eonia at 5.3 bps. The “money” curve was low but at least somewhat upward sloping and still displaying orderly and meaningful characteristics. Since then, the money market hierarchy has been upended all over the place. 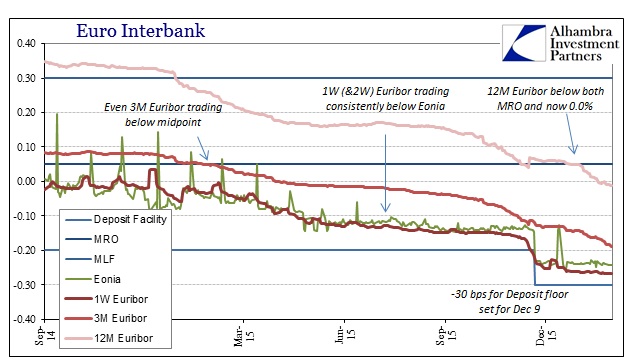 Before QE even began, 3-month Euribor sank below the midpoint (MRO) rate which is supposed to be the main monetary policy level/target. The MRO, being essentially a repo rate with the ECB, should not be pierced in a sustained fashion by any unsecured money market rates at any of the shortest terms, let alone the 3-month Euribor maturity. Just a few weeks later, 3-month Euribor then proceeded right below zero.

By summer last year, 1-week Euribor starting trading shallow to Eonia which also should never happen persistently, as additional time to maturity should always be at a positive spread to overnight (Eonia) unsecured. To be at such crossing is only an unhealthy indication of fragmentary mechanics between the deposit account, Eonia counterparties (limited to the largest banks) and ultra-short Euribor (open to more banks). Now we see that 12-month Euribor has also dropped below the MRO, and has remained negative since. NIRP is not supposed to act with such fundamental distortion, it is meant to push banks into the opposite – the orderly and useful money market function at least somewhat representative of what it all used to look like: 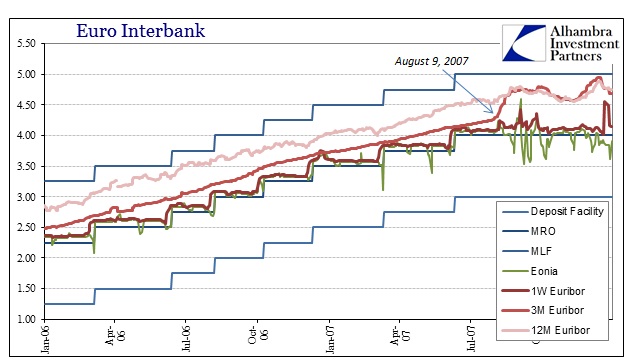 The hierarchy of orderly function is obvious, including the MRO midpoint acting as the main monetary policy projection or target. The corridor was well preserved and behaved, and so was the increase in credit and the freedom by which financial activities took place (all artificial, of course, but that is also another topic). The effects of NIRP and QE, by contrast, have only pushed the opposite condition where distortion is now seemingly the only factor. This is not an academic issue of display in some otherwise benign charts, there are real consequences to these distortions.

European banks simply refuse the license given them by all sorts of ECB commands. Even the deposit account itself leaves no doubt on this count; despite the monetary policy rate of now -30 bps for the “floor”, use of it has only grown! As of yesterday’s figures, the ECB reports €229 billion in the deposit account as compared to just €33.9 billion when NIRP was unleashed. 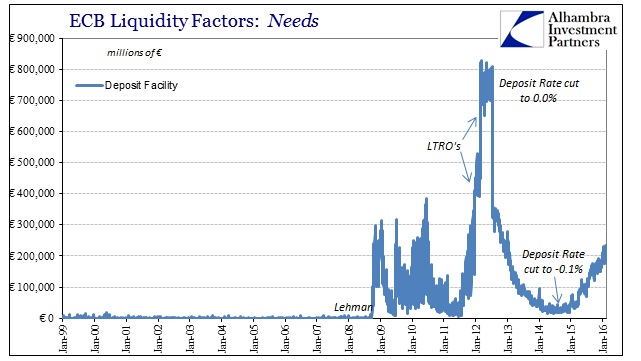 The combined “money” picture in Europe is unambiguous in its refutation. All that has been accomplished is to push European banks further and further toward what might be the ultimate end of the whole experiment.

The unspoken option is for banks to convert those ledger balances yielding negative numbers into actual, physical cash. Again, they resist doing so because there is a cost to it, not just in terms of figuring out in the physical world how to transport and store billions of euros in actual currency, but in taking that option such “vault cash” is no longer directly connected to the wholesale system; ridiculously, that means that cash liquidity is no longer truly liquid. To this point, they are not willing, apparently, to go that far which suggests that we haven’t reached a point where the artificial, central bank-induced cost of not doing so is high enough – yet…

Instead of paying, say, -50 bps (or -100 bps, -200 bps?) and certainly not lending, might banks opt for convertibility despite the inconvenience and cost of doing so? It wouldn’t be easy, as how would a large-scale global bank quickly turn to storing €20 billion euros in vault cash, but I don’t think you can so readily dismiss that possibility. If one bank did it, then another might and then you have a good, old-fashioned bank run as convertibility of liabilities would be just like it was 1930 or 1893.

To this point, it is clear only that banks are content to accept negative money rates up and down Eonia to all Euribor. All that suggests is the level of resistance to every single monetary policy impulse, as the whole of negative Euribor now shows that banks are not going to suddenly turn toward lending and are indeed evaluating options about the relative costs of further idleness. Eonia at -24 bps might not be enough of a trigger, but might 12-month Euribor at that rate, especially if that represents contemplation about the least worst option?

Again, it is patently obvious that lending does not factor upon NIRP (or QE). The estimates for total loans across Europe suggest only minor possible loan growth, and even then it has been mostly financial related. The monetary figures, on the other hand, leave no doubt that NIRP has been totally ineffective. If banks had responded with any kind of loan spurt, it would show up as an increase in required reserves; none such resides in the ECB’s monetary calculations. 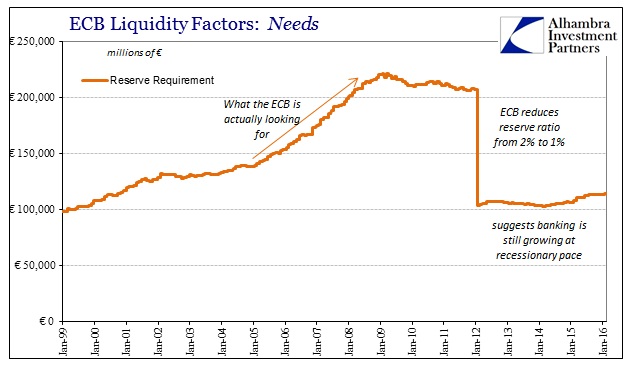 Since October, required reserves are practically unchanged reflecting the total lack of influence through the combined efforts of QE and NIRP. That means despite -30 bps at the nominal money market floor and now €725 billion combined PSPP (QE) and the third CBPP there is nothing to show for it except a blasted money market system that only grows more so with each discrete interference. 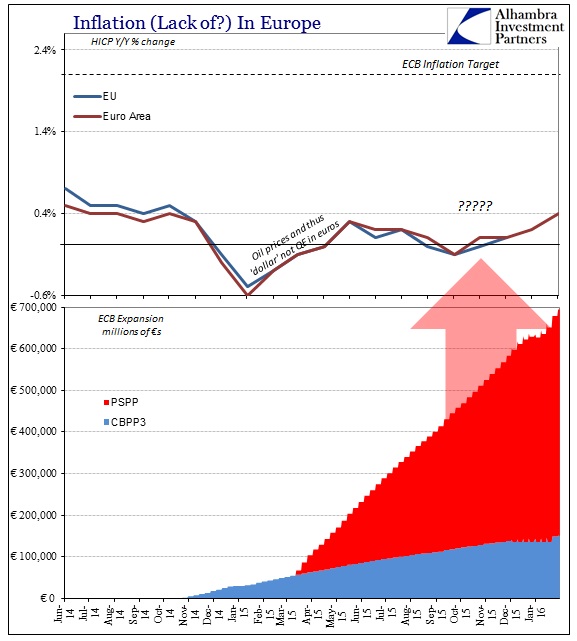 Monetarists believe and even admit that there are costs to their efforts toward recovery, but that in the end everyone will thank them for undertaking such courageous actions under the bloom of full and sustainable economic growth. Everyone can agree on that first part, as the costs to the ideas are easily evident in the real economy and money markets that bear the brunt of them; what is missing, anywhere, is the reward for all the burden. QE, NIRP, the whole monetarist program does not work, leaving only damage behind and nothing positive with which to offset it (“it could have been worse” is the same as “jobs saved”, thus a meaningless counterfactual that is revealed more so by the day).

It is far more nefarious than “pushing on a string”; that phrase implies no cost to trying. Unfortunately, the more “they” push the more likely to find the worst of the worst cases.

For the FOMC now scared and confused about the state of the US economy that at the start of 2015 (they weren’t so confident by the end of 2015 even though they finally acted symbolically) was supposed to be in full growth mode, the lesson from Europe is unbelievably clear. NIRP does not work and is, in fact, quite unhelpful if not yet fully exposed as seriously dangerous. There is far enough of sample size to make that determination, and anyone who claims relevant differences between Europe and the US has less to stand upon the more the US and European economies and their financial “turmoil” synchronize. In other words, it’s not that QE doesn’t work, or that NIRP doesn’t work, it’s that monetarism in any form doesn’t work; it is proving all over the world harmful directly, and more so indirectly in the immense cost of lost time and effort wasted in trying it and then however much time still left to be spent recovering from the utter mess.