The stock market is still viewed as if it were a discounting mechanism, a system where information is processed and priced to deliver insight about the fundamental state of liquidity, markets, and the economy. That view has always been debatable, but never more so than the whole of this century so far. What were share prices suggesting, fundamentally, in March 2000? Or October 2007? Market efficiency proponents can only suggest that the “information” flowing into stock prices changed, as if there weren’t any warnings in the years leading up to those peaks.

You can make the same argument against stocks on the way up. In the US, starting just after QE3 and just before QE4, US stocks went on a rampage in anticipation of a full recovery drawn closer by the determined efforts of Ben Bernanke. It wasn’t the case that the recovery was then at hand; far from it, since throughout 2012 there were more hints of recession than anything else. Instead, stocks were predicting that QE would work even though they ignored that it was third and fourth iterations that apparently suggested it. This is a universal question about not just stocks but monetarism and the financialism that has taken hold of what used to be free markets (where discounting was most likely).

On September 25, 2013, Japan’s Prime Minister Shinzo Abe delivered a speech to the floor of the NYSE. He began by citing the Hollywood movie Wall Street, inducing several cringe-worthy passages that were intended to show how Japan had just faded over time.

In the original film in 1987, the words “Nikkei Index” appear. Japanese businessmen also take the screen and the film reminds us of the era in which the Japanese economy was regarded as a juggernaut.

However, in the 2010 sequel, the investors that appear are Chinese and it is not Wall Street but London where Gordon [Gekko] amasses his wealth. Japan is conspicuous only in its absence.

The only real significance of Abe’s statement is the reference to a shift into London (eurodollars) but that is another story. Abe’s point was to emphasize the introduction of QQE (and the other two “arrows”) having been effected only months before. He was on his own version of a Wall Street road show to get the world’s “markets” to buy in to his vision.

It is certainly true that after the bursting of its bubble, from the 1990’s Japan was mired in almost 20 years of deflation and the economy was sluggish. But today, I have come to tell you that Japan will once again be a country where there is money to be made, and that just as Gordon Gekko made a comeback in the financial world after 23 years of absence, so too can we now say that “Japan is back.”

He told Wall Street traders that, “the Japanese economy that surrounds us in exceptionally good” and that they should “buy my Abenomics.” He gave them no real reason to except that faith; it isn’t as if QQE was Japan’s first run at the program, indeed it was the nation’s eleventh (if not twenty-second or third version) dating all the way back to 2001. The size, scale, and persistence were supposed to be the true differences – this time they meant it.

Stock traders, of course, had by that time already bought the premise starting the prior November when the yen first shifted on Abe’s electoral victory. It was the same pattern as we saw of QE3 in the US, that stocks were “discounting” a recovery that would follow from the inarguable success of QE writ large(r). By the time Abe spoke on Wall Street about Wall Street, the Nikkei 225 had already almost doubled – jumping from around 8,700 in late November 2012 to about 14,760 in September 2013. Japanese stocks kept going even though the Japanese economy would soon fall apart. The Nikkei 225 would peak last summer, importantly just before the August global liquidations, at nearly 21,000.

During that entire time, the Japanese economy fell into recession, recession again, and now with economists left to argue whether this first quarter in 2016 will mark the third re-recession just under QQE. As I have tried to chronicle this whole time, Japanese households have been utterly devastated by QQE’s effects primarily via the yen and its disruptions and impoverishment.

Now, at this very late date two and a half years after Abe’s financial advice to “buy Abenomics”, only now is Wall Street selling.

Starting in the first days of 2016, foreign traders have been pulling out of Tokyo’s stock market for 13 straight weeks, the longest stretch since 1998. Overseas investors dumped $46 billion of shares as economic reports deteriorated, stimulus from the Bank of Japan backfired and the yen’s surge pressured exporters. The benchmark Topix index is down 17 percent in 2016, the world’s steepest declines behind Italy…

“Japan has been disappointing,” said Nader Naeimi, Sydney-based head of dynamic markets at AMP Capital Investors Ltd., which oversees about $115 billion. He’s a long-time fan of Tokyo equities who says he’s now looking for opportunities to sell. “A lot of people are starting to doubt Abenomics.”

The only question is, “what took so long?” There were doubts about Abenomics from the very start and then a distinct lack of indicative progress throughout its entire run. What that suggests is that traders were trading Japan only for the self-fulfilling prophecy of central bank programs – “investors” weren’t buying QQE or Abenomics as they were intended but rather what they assumed other “investors” would do for the same reason. That left stock prices discounting not fundamental properties but cumulative views on central banking. Again, the reversal dating back to last August’s liquidations is very telling in that regard.

Since then, central bankers and economists everywhere have remained steadfast as if nothing has changed; the future economy remains as bright as ever in their vision, with any problem just a temporary detour on the road to eventual fulfillment. The shift in markets, however, was accompanied by an equally shattering one in the global economy, creating an even larger mismatch between promises and delivery; with central bankers increasingly stranded upon a dream that hardly anyone can recognize now as realistic. It is, as noted this morning about Italy, a global awakening. The monetarist dream is not yet quite dead, but it is being called out for still suggesting an increasingly unbelievable future path.

Gordon Gekko might have been the perfect analog for Abenomics since he perpetrated in the movie various “pump and dump” schemes. How has Abenomics, or any of the QE’s for that matter, been any different?

I wrote back in September 2014, exactly one year after Abe spoke at the NYSE, about “being wrong.” At that time it was in the context of viewing markets through a fundamental prism when everyone was so sure that the fun was just getting started.

Reflections upon the past few years bring out valid criticisms about “being wrong.” I have made no secret that I favor the bearish interpretation of eventually the stock market, but immediately the economy. The erosion and attrition I describe does not look like anything seen before, except the months and years immediately preceding the Great Recession. But that inevitably brings back the rejoinder that there is no such immediate danger right now, as bad as the economy may be there is nothing financially equivalent to the conditions that existed prior to August 9, 2007; with the further inference that a floor exists, economically speaking, today where a trap-door was present then.

The point is evaluating risk and actually discounting relevant information no matter how inconvenient and contradictory (and lonely, in the respect of swimming against the raging tide):

But 2008 was 2008, and 2014 is a different circumstance. Or is it? We see the same types of cracks appear and widen, dysfunction continues on a global scale and the economy even here never lives up to those promises. So even evaluating on the individual circumstances here leads to the same framework – identifying the possibility that the economy may not be providing the support markets are expecting. Further, the potential trajectory of that may be such that “next year” never actually comes, and at some point “markets” become too aware…

Risk is defined as keeping those positive returns for more than just numbers on a long ago discarded custodial statement. You can generate all the positive return you want on the upside, but you better have a solid handle on risk of a downside that buries the returns wherever and whenever it may show up. An economy that never lives up to the hype set against rapidly rising prices is simply a highly increased probability of that.

In other words, it is and always has been “bubble.” That meant seeing through all the distortions and finding the true economic and financial identity; looking at 2014’s 5% GDP for what it was (actually transitory) rather than what everyone wanted it to be (the finish line) because systemic function (“rising dollar”) mattered(s) far more than “the narrative.” It’s an honest examination of what is really an ongoing and seemingly unstoppable slowdown, because 2% GDP (which is what 2014 amounted to after all the hype) is not now just as it has never been associated with “overheating.” It is not accepting excuses for what were supposed to be “inarguable” monetary successes; it was realizing that there are only excuses.

The difference between the US stuck at 2% (to this point) and Japan in perpetual shallow recession is only the US bond market – and that is in danger of being removed as a distinction artificially in our “favor.” The monetary results of the QE’s have been almost exactly identical, and that includes widespread impoverishment. That is the legacy of monetarism as it presents negative economic factors of redistribution combined with global monetary decay; i.e., the slowdown that will not stop slowing down. It is several years too late, but even stocks are starting to see it at least as a serious risk. In the end, that might be the biggest significance of last August; that it finally represented clear and unequivocal evidence that there is really is and has been nothing to QE.

The world looks vastly different on this side of that divide, but the truth is that it has been that way all along. The global economy did not change last year but it finally sowed enough doubt that views on QE, as a representation of true central bank power and influence, did. 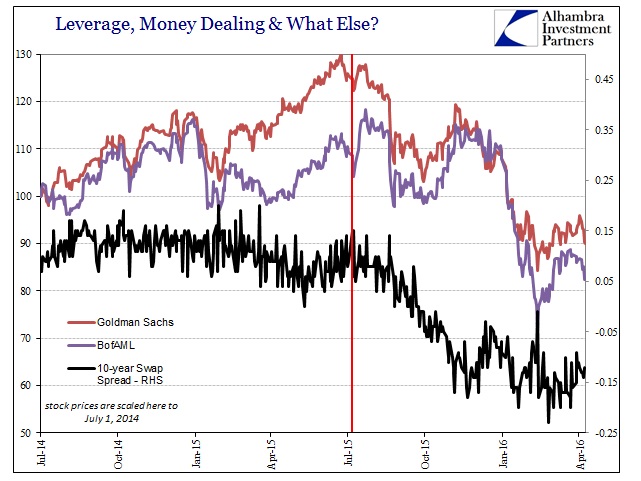