No matter how bad the economy seems to get elsewhere in various data series, the unemployment rate and the common assessment of the labor market (provided by the Establishment Survey) usually prevails. It has become almost a template where any description of the offending economic account will attach some version of, “X was down unexpectedly but should only be temporary because the labor market continues to be so strong.” The obvious contradiction is just ignored entirely, meaning that what good is purported labor market strength now when it wasn’t the entire time “X” started to contract.

By the mainstream account of payrolls and the unemployment rate, the intensified weakness of the slowdown into 2015 didn’t appear to have much effect at all on labor demand. In fact, as of the past few months, the BLS reports enormous response in terms of supply as the labor force in their numbers surged at a rate not seen since the early 1980’s (despite the economy bearing absolutely no resemblance to that time). It seems to support the idea of potential “overheating” as robust job conditions are thought to be the last predicate stage before “inflation.” 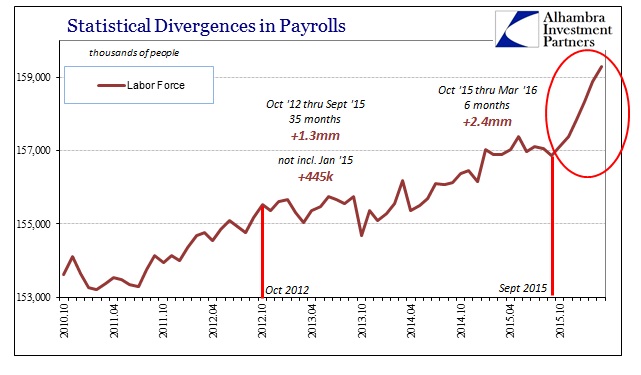 Despite policy assurances that “overheating” remains the dominant case, the Federal Reserve’s actions suggest otherwise – or at least some caution that is not reflected in the unemployment rate version. They claim to be “data dependent” but the question is which data they actually depend upon. In August 2014, the FOMC made something of a switch in its primary indication of labor strength (or weakness). Though we can’t know for sure, it seemed as if the introduction of the Fed’s LMCI (Labor Market Conditions Index) was meant as at least a partial replacement for the mainstream statistics that in more placid times were once admitted as flawed. Janet Yellen herself has referred on several occasions to awareness of the denominator in the unemployment rate.

The LMCI is a “factor model” that seeks to account for conditions where certain data points are out of alignment with more widespread estimates; just the kind of circumstances we find now where the unemployment rate and Establishment Survey describe an economic world all their own. The model is described as:

The unemployment rate is just one of nineteen inclusions, but the general point about the factor model is that it is isolated and given much less weight when it is alone in its signals or projections. 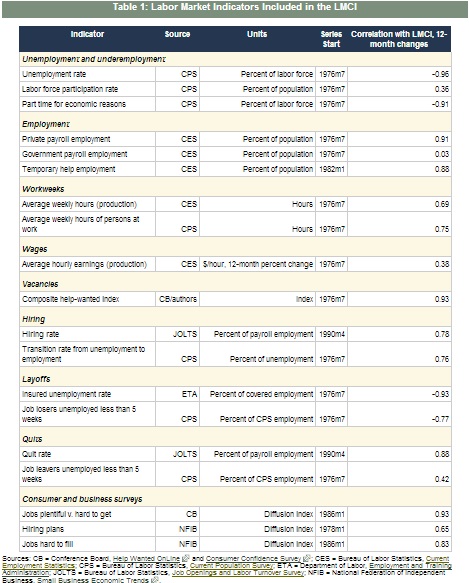 The behavior of the LMCI in the past few months, really since the start of 2015, has been far different than the unemployment rate or Establishment Survey had it. There was noticeable labor disturbance starting early last year that only became worse at the outset of 2016. In fact, the LMCI has been negative for three months running (thru March) for the first time since the Great Recession. It isn’t a huge negative, but when the labor market is all that there can possibly be in support of the recovery narrative the significance is that much more amplified.

Take a peek below the headline jobs data, however, and there are signs that the labor market is losing some momentum. Temporary-help employment, which peaked prior to the last two recessions, is showing signs of topping out. And a broad labor-market index constructed by Federal Reserve economists — and monitored by Chair Janet Yellen — has fallen for three straight months, the first time that’s happened since 2009.

“I am a little concerned,” said 75-year-old Bob Funk, chief executive officer of Express Employment Professionals, which provides temporary workers to companies. “Our industry is always on the front end of a recession,” as provisional workers are the first to be let go on signs of economic weakness.

There have been false positives in the historical index before, notably 1985 and 1995, but my point isn’t really cyclical or finding recession; it is that the labor market is claimed to stand as an unwavering bulwark for the US economy no matter what anything else says. The LMCI version provides a much different view of the jobs environment, and thus economy, including the very direct suggestion that gathering economic weakness elsewhere is actually having a dampening effect consistent with the broad and global slowdown. It’s a much different interpretation than where any weakness can be dismissed as temporary solely because it isn’t also being found in the mainstream payroll reports. 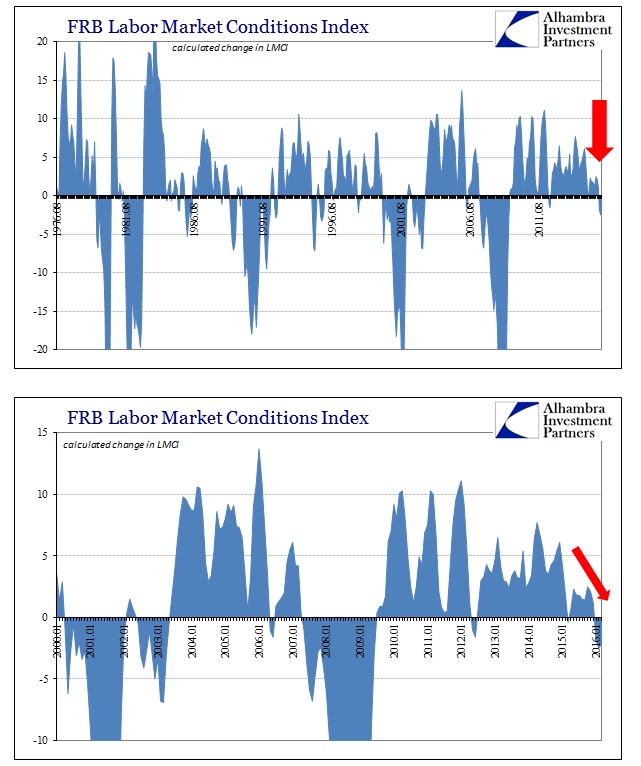 If that were the case, then it would provide further evidence and suggestion that what the BLS is providing is not an accurate view of the economy at all, but more so of its own biases (trend-cycle) which have the effect of skewing and amplifying positive variation in the chained monthly results. I have little doubt that is the explanation for the reported surge in the labor force that nobody seems to be able to find:

While the government has reported that the labor force has grown by more than two million workers over the past six months, Funk said he isn’t seeing that in his business, with the number of people he has available to fill jobs down from last year.

Tom Gimbel, chief executive officer of Chicago-based staffing company LaSalle Network, is seeing some people come off the sidelines and resume working. But it’s more a trickle than a torrent, he said, adding, “I think it’s running pretty dry.”

To cope, companies are doing more for existing employees to convince them to stay and becoming less picky in choosing new ones to come on board, said Paul McDonald, a senior executive director at Robert Half International Inc., a Menlo Park, California-based staffing firm.

These are just anecdotes, to be sure, but like the Fed’s own LMCI they further isolate statistics that just cannot be corroborated by anything else. That is a serious problem in any circumstance, but in April 2016 it is that much more so since it is the mainstream view of the labor market, provided only by the BLS’s stochastic processes, that is all that is left of the recovery idea. The general weakness that is so obvious everywhere else, including GDP now, has had a general effect that the mainstream labor reports have been hiding. It’s a major blow to the recovery narrative and helps explain both why the FOMC and its members would still tout the unemployment rate in public (rational expectations) while acting contrary to it in private policy consultation. They are right to be concerned; the slowdown is real while the jobs may not have been.