Without Recovery There Is Every Need To Examine The Worst Case

Without Recovery There Is Every Need To Examine The Worst Case

There is a great deal that is wrong with mainstream economic commentary, starting with its unwavering devotion to orthodox economics and unshakable faith in their “stimulus.” No matter how little is actually stimulated there is never any doubt that the media will simultaneously forget the last one while lavishing praise on the next one. It is, however, the actual economic commentary itself that may be the most damaging. Because nothing works, every news story is printed from the shallowest, narrowest perspective. It is a grave disservice to the public and journalism.

As an example, on July 15, 2015, the Wall Street Journal published an article on Industrial Production that wasn’t unique or atypical. If you read these kinds of stories you find them utterly devoid of differences, so this effort was entirely symptomatic. At the time, industrial production for June 2015 was estimated to have risen 0.3% month-over-month, ending a string of six consecutive M/M declines. That fact more than the degree of the rise was cheerfully reported as if meaningful.

U.S. industrial production rose in June, a sign that the improving economy is helping the sector break out of a slump.

Industrial production, a measure of output in the manufacturing, utilities and mining sectors, rose a seasonally adjusted 0.3% from May, the Federal Reserve said Wednesday.

Even though the article noted that one month was nowhere near enough to overcome those prior declines, it didn’t matter because it was finally a plus sign conforming to the mainstream “narrative.”

The pickup comes as other measures show improvement in the economy this spring, with employment continuing to climb and wages creeping up as the labor market tightens…

“Weakness in manufacturing appears to be past its peak,” wrote Jim O’Sullivan, chief U.S. economist for High Frequency Economics in a note to clients.

If you happen to peruse similar stories on Industrial Production today, you will find no notice of those prior assurances; no stories discussing how June 2015’s single month was not, in fact, significant at all. There aren’t even any mentions that June 2015 was subsequently revised to now show a decline. This is particularly relevant to the April 2016 estimate released this morning also providing a similar and likely premature huge sigh of relief.

All that is bad enough but that isn’t even my main point of contention. It is as I indicated earlier today, that revisions in IP were not limited to monthly variations but rather to rewrite the whole idea of the recovery. At that time, the Fed estimated IP had recovered to about 5% above the prior peak in 2007. Two benchmark revisions later now claim that IP in June 2015 was instead 1% below that prior peak. Economists were basing their claims for “transitory” weakness on not just the shakiness of monthly variation but more so on a recovery that increasingly figures never to have existed. That dramatic change seems worth noting somewhere, especially as it drastically alters all economic implications going forward in this same direction.

My emphasis on the IP subcomponent of the production of consumer goods really emphasizes this point since consumers are where this “overheating” idea intersects the supposition of “full employment.” In July 2015, the Federal Reserve figured that IP in consumer goods had “recovered” to 2% less than its prior cycle peak in 2007. The current benchmarks instead figure production levels last June were still almost 11% below last cycle. That is not a minor difference; at -2% you have a difficult time trying to argue “overheating” or “full employment”; at -11% you are deservedly laughed at while attempting to make the same case.

Mainstream economic commentary has been proceeding from false assumptions, which is really the point. With those prior benchmark estimates you may be somewhat concerned about weakness, but with the current set of IP numbers you are wholly unsurprised by it and how it would continue on the same track. Again, this is worth comprehensive exposition rather than determined silence and maybe intentional omission. It is the biggest story this century, as country after country falls into social disorder including our own, but the media sits silently stunned as to why anyone would question the economy or really economists. 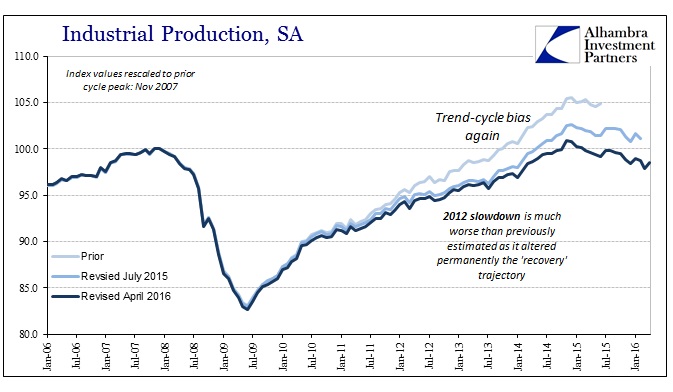 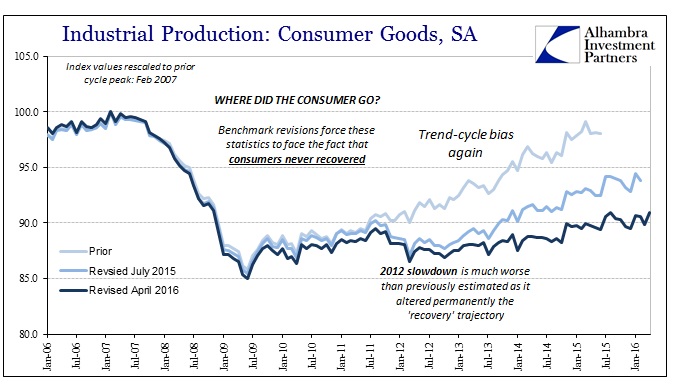 The implications are no longer just about recession, though that remains as a primary risk. What this shows is an economy very much like the participation problem in labor, meaning that the Great Recession revealed economic potential much reduced by prior financialisms under the unrestrained eurodollar (Alan Greenspan’s quarter point changes to the federal funds rate counted for nothing) of the 2000’s. What should be on the front page of especially the Wall Street Journal is an honest investigation trying to determine or at least raise questions about just how much the economy has been reduced; not more blind deference to the disciples of “transitory.”

I have used Milton Friedman’s plucking model to illustrate these implications before, and I think it is useful to do so here in this context. My own concern is not just that economic potential has been shriveled but also a growing sense that there is even more to it than that. 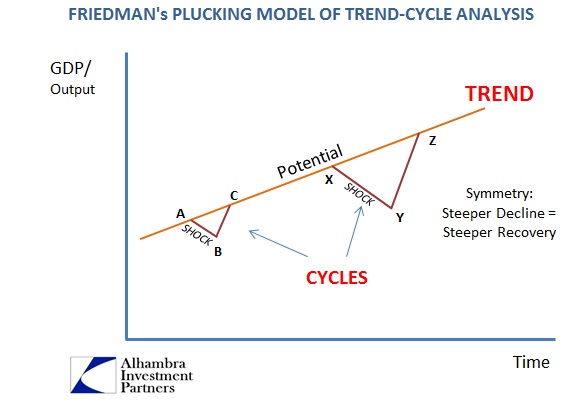 Economists at the Fed proceeded on the assumption of what you see above, namely that the Great Recession was a very nasty cycle but a cycle nonetheless. With monetary policy clearing up any financial impediments there was every expectation that the economy would soon rejoin its prior trend even if it took a little bit longer to do so (because of, it was proposed, the lingering after-effects of the panic). Like the IP revisions or the denominator in the unemployment rate, however, that isn’t what we actually find. 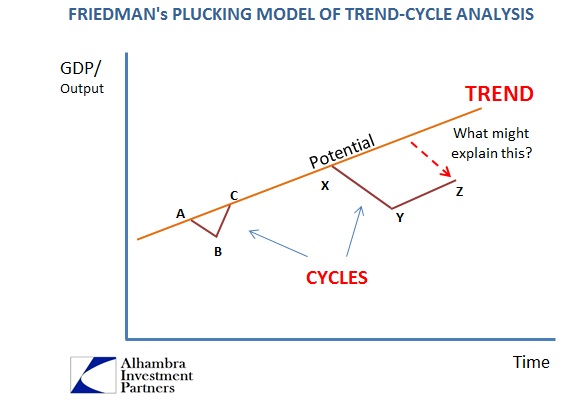 Since it is 2016, now almost ten years into this “cycle” without recovery, it is quite reasonable to assume instead that it never was a cycle at all and that the economic baseline itself shifted. 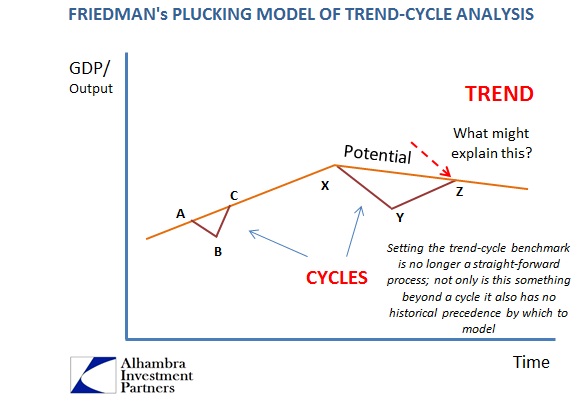 That view would at least account for the economy having shrunk after the Great Recession, but it leaves unaccounted the possibility of what economic potential or trend might have been before it. Given the state of the global economy under the eurodollar standard in the mid-2000’s, we have every reason to believe that potential did not “bend” starting in 2008. In other words, the economic mirage of the middle 2000’s everywhere from the US housing bubble to the Chinese or Brazilian “miracles” was false prosperity that papered over growing global impoverishment. In that case, the stylized model of trend and cycle is more so this: 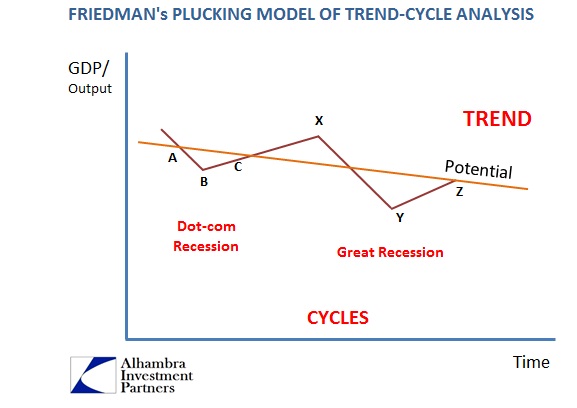 But I believe there is still another baseline scenario that also deserves consideration. While the Great Recession seems to have revealed the reduced economy and its shriveled foundation, there is still the possibility that the deep recession itself and the interaction with the lack of recovery further amplified that depressive instinct; the baseline trend also bent in 2008 even after having been pushed downward before it.  It is the only way to account for what we already see in places like Brazil, where the “dollar” derived slowdown progressed from slow and steady growth to slow and steady contraction to now steady depression. It seems as if there is no bottom. 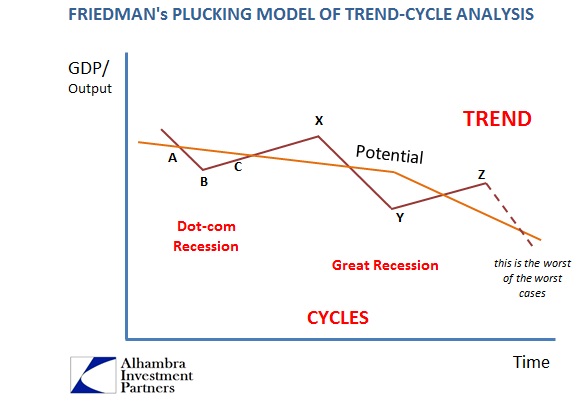 This would propose that the Great Recession not only revealed the shrunken economy but frighteningly added its own weight to it. Unfortunately, it is an all-too-realistic scenario in a financialized economy that was once dependent upon solidly growing credit supply (which itself was dependent upon the unbroken geometric growth of credit-based “money”) for marginal expansion. As we find in Brazil, there really is no bottom in sight even though contraction has been in place for just about three years already! 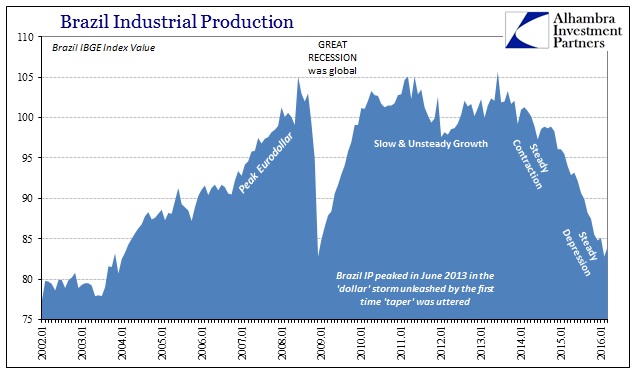 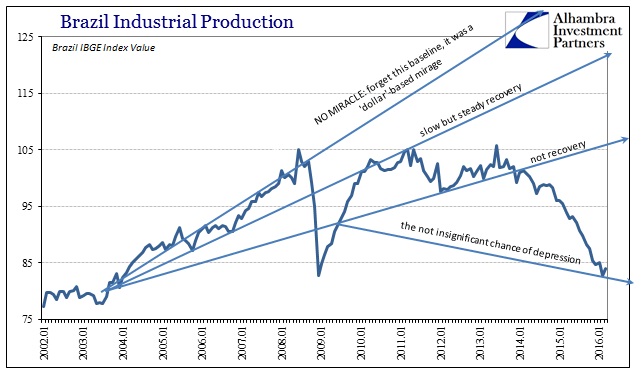 The only way that happens is if actual economic potential (meaning in the real economy as opposed to some number provided by BEA or Federal Reserve statistical models) follows the path I suggest above. Brazil is admittedly a severe and extreme example, but the outlines of the US labor market and other indications of US “demand” follow the same general idea. That would mean that recession cycles lead to a ratchet effect, where after each the economy only gets worse. 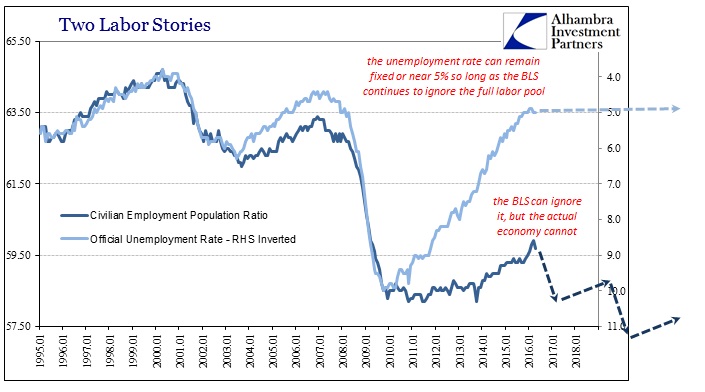 This scenario would recommend that the “debate” about US or global recession is actually a secondary consideration. More attention might better be paid to understanding the true nature of the past ten years than whether or not one month of seasonally-adjusted IP, before revisions, can be endlessly extrapolated into Xanadu. What the revisions show without argument is that the US economy is and has been in serious trouble all along – that an economy that suddenly leaves 15 million out of it is not an economy anywhere close to “normal.” Where it goes from here is absolutely up for debate, but that argument doesn’t start anywhere near “full employment” or “overheating.” It is left instead trying to figure only degrees of bad and worse.

To be clear, I am not proposing that the worst case is the base case. Rather, I am only suggesting that current circumstances and more so how the economy got this way do not rule it out. It should be seriously considered rather than still more universal mainstream ignominy of “unexpected” or “transitory.”