If you want to understand the US economy based on one economic report, you could do a lot worse than the report on productivity released last week. This was the third quarter in a row that showed a decline in US productivity. That is, output was up (GDP was positive) but not as much as the amount of work required to produce it. Those three consecutive negative quarters are the worst streak since the US started keeping and reporting these statistics. That only goes back to just after WWII so it isn’t very long in statistical terms. But for the average person WWII was a long time ago and a lot of bad things happened to the economy along the way. These are indeed extraordinary economic times.

Productivity is really what capitalism is all about. It is the triumph of brain over brawn, of innovation over brute force. There are really only two ways to get more out of our economy – if more GDP is the standard by which we measure growth. One is to increase the labor input – by either putting more people on the job or by having the existing workers put in more hours. The other is to produce more using the same amount of labor – improve the productivity of each labor input through some work saving device or method. The internet is said to be one of the greatest productivity enhancing inventions ever – the invention of Facebook notwithstanding – so it is easy to see why the 1990s were a time of general prosperity. And the 2000s have been a time of turmoil, from geo-political to economic, and distraction – the aforementioned Facebook coming once again to mind – and little improvement in productivity.

With the workforce participation rate having fallen since the Great Recession and productivity growth anemic, the slow growth of recent years is not surprising. With corporate investment still anemic and the baby boomers on the verge of mass retirement, the outlook for growth seems fairly grim. That could change but with the payoff from investment uncertain and often lengthy, I suspect it won’t change rapidly. Of greater interest perhaps is why we find ourselves in this current situation and how we might rectify it. The root causes are embedded in monetary and dollar policy, not the same thing but often intertwined.

In the period since the turn of the century, investment in the US has been directed to areas that have little or no impact on overall productivity. The period after the dot com bust until the 2008 crisis was marked by a huge increase in housing investment, not an area that moves the needle on productivity. After 2008, investment poured into the energy industry, first in fracking for natural gas then for crude oil. Higher production of domestic energy may – and I emphasize may – have beneficial effects from a geopolitical standpoint but it does next to nothing for overall productivity. Finding ways to extract expensive oil from the ground is probably not the best use of our limited investment funds when cheap oil is available for import. Since about 2002, the US has directed a large portion of its investment literally into the ground, first in the form of housing and then in energy well drilling. When house prices fell we got a financial crisis. When oil prices fell we got a raft of oil patch bankruptcies – before the process was halted by renewed dollar weakness and higher oil prices.

So, it is not surprising that economic growth is lagging in the wake of this wave of non-productive investment. It is not a mystery or a puzzle as so many recent articles have claimed. It isn’t some mysterious force that has produced this secular stagnation. It isn’t the end of human ingenuity or innovation; we haven’t run out of ideas. The source of our problems is bad policy, not bad luck. The economists at the Fed and in the ivory towers of academe need look no further than the closest mirror to find the cause of our growth calamity.

Since the early part of this century, our government has consistently pursued a weak dollar policy. It has never been “official” policy but it was obvious during the Bush administration that it was the preferred outcome. And even after a financial crisis and a change of government, the policy continued, Obama no more economically aware than Bush. After the crisis it was at times a policy driven by monetary policy and at other times it was driven by rhetoric – China is a currency manipulator! – but, again, the US made it no secret that it preferred a weaker dollar. And it is the dollar weakness that is at the root of our troubles.

A weak dollar is nothing more than inflation and high inflation distorts investment toward real assets. Economists will tell you that inflation during this century has been tame and dismiss this argument. Indeed, economists are at this point more concerned about deflation than its opposite. But official inflation measures are nothing more than an attempt to measure the value of the dollar, the purchasing power of the dollar. During the 2000s the value of the dollar, as measured directly, fell dramatically. Gold started this century less than $300 and now tips the scales at over $1300. Crude oil started at less than $30 and while it has come down recently, it spent most of the last decade north of $100. The Euro started this century costing about $1 and by 2008 it had soared to $1.60. The recent dollar strength that has caused so much angst didn’t even fully correct what came before. Given a choice between a direct measure that shows an obviously weak dollar and an indirect one that shows the opposite – CPI – why would we choose to believe the indirect, government directed method?

When inflation is high – when the value of the dollar is falling – investors focus on preserving the purchasing power of their capital. This focus leads them to real assets – real estate and commodities – because those assets retain their value over time – they have value independent of the currency used to measure the value.  A weak dollar also encourages capital outflows, investment in other currencies preferred to dollar based investments. Productivity enhancing investment in the US – investments of the mind – is necessarily reduced. The result is what we see today. Larry Summers calls it secular stagnation and Bill Gross calls it the new normal. I call it secular ignorance.

In recent years the dollar has strengthened and if that were to persist it would eventually have a very positive effect on the US economy. Investment would shift from weak dollar investments – shale oil for instance – to strong dollar investments, those that raise productivity. No, I have no idea what those investments might be but until we perfect the crystal ball that will always be true; we can’t know what innovation will spring from the mind of the entrepreneur. But as I’ve said before, the transition from a weak dollar mindset to a strong – and preferably stable – dollar is not without upset as we’ve seen over the last two years. The strengthening dollar has been seen as a problem by economists as it has pushed down oil prices and impacted energy investment and overall economic growth.

The strength of the dollar over the last couple of years was not a policy decision but mostly an accident, a byproduct of other policies. And now it appears that policy is being adjusted to keep the dollar from rising anew. The US dollar index is lower on the year, gold and oil prices higher; the shift to strong dollar investments has once again been short circuited. The world is apparently not ready to endure the pain of the transition to a stronger dollar. Until it is, weak growth – really weak investment – is what we’ll get. We may get short bursts of better growth but until we correct the lack of investment, until we address the low productivity growth that is the result of our weak dollar fantasies, we will continue to suffer the consequences.

Our market indicators didn’t change much since the last update. The outlook for growth may have improved slightly but it isn’t enough to change our investment outlook. The yield curve continues to flatten although recently the rate of decline has slowed.

Inflation expectations are still falling although based on recent commodity market action that may start to change soon.

Real interest rates are still negative, a support for gold and other commodities.

Credit spreads are the most positive of our market indicators, still narrowing since the peak in February.

Meanwhile, the TED spread continues to show stress. I know the consensus is that it is all a matter of money market reform but the effects are real regardless of the cause.

The 10 Year Treasury yield actually fell a little since the last update. Technically still oversold and due for a bounce but there seems little desire to sell bonds right now. A lot of market commentators hold the view that the 10 year doesn’t mean as much as it did in the past because the Fed has distorted the price. I don’t agree and would just point out that the Treasury market has done a heck of a lot better job of predicting the direction of the economy in recent years than any of the pundits who want us to ignore it. A 10 year Treasury yield at 1.5% is not predicting anything good about economic growth. 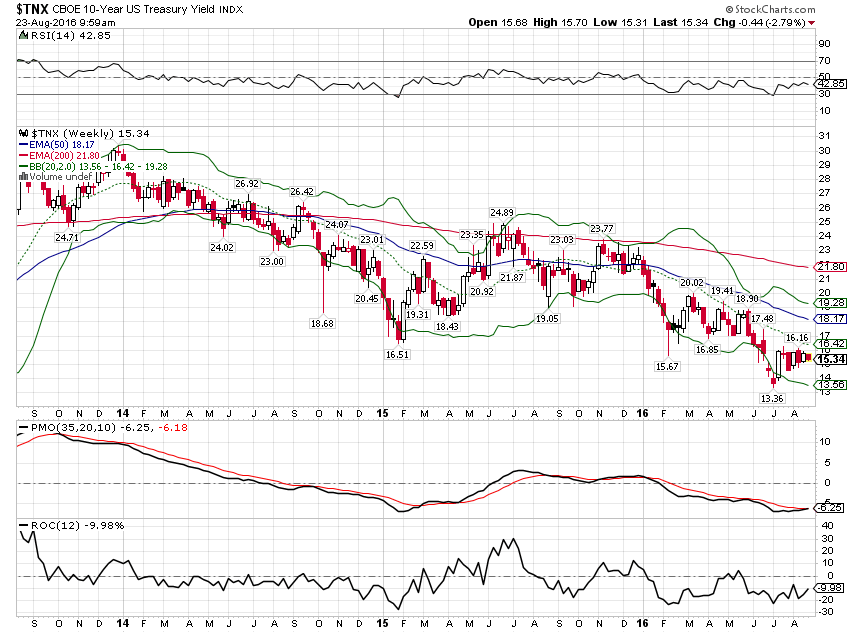 The dollar is showing renewed weakness. Fed rhetoric has lately been a bit more hawkish so this move means that either the market doesn’t believe the Fed or growth expectations outside the US have picked up. Some of both maybe…. 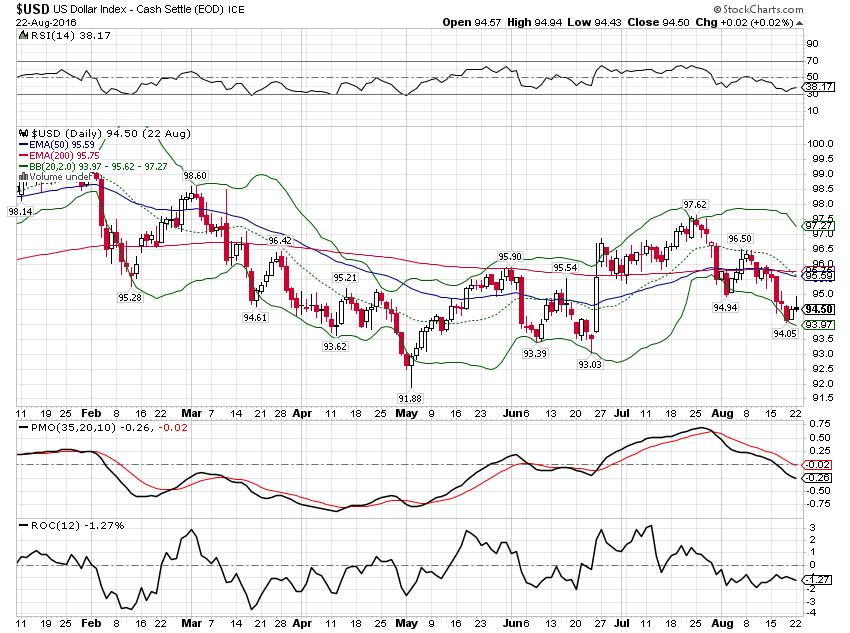 The dollar weakness has been positive for commodities (see above). I added this general commodity ETF to the asset allocation portfolios last week. 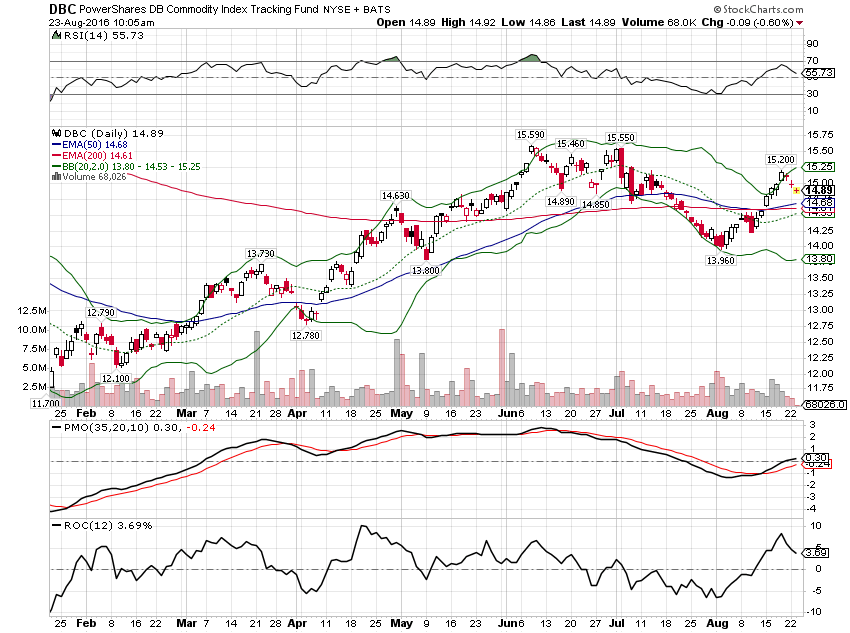 Gold is supported by the weak dollar but the last few weeks has been consolidating previous gains. 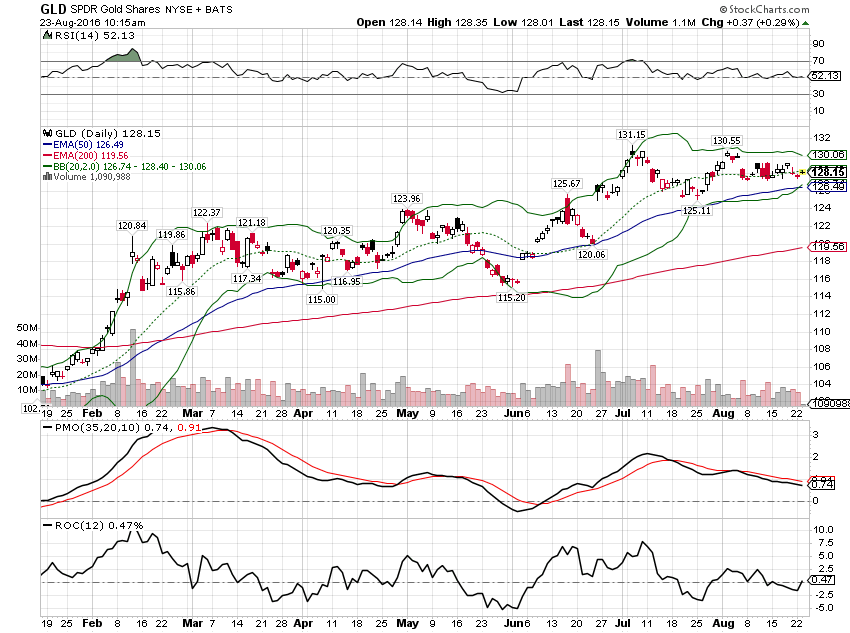 The Atlanta Fed’s GDPNow forecast shows Q3 GDP growing at a 3.6% pace and if that happens it’d be a welcome change. Given the direction of the dollar and the trend in productivity I would not put much faith in the idea that it would represent anything more than a short term change. In any case, there is little evidence in our market indicators to support even a short term surge in growth. As for the long term, I keep thinking of something I heard a long time ago in the gym – no pain, no gain.