I have no idea if Sir John Bond, former head of HSBC, is or was superstitious, but if he wasn’t maybe it would have helped the bank if had been. In November 2002, the British bank announced a huge American purchase, buying Household International for $14.2 billion in HSBC stock. This was no small thing at that time, the stock market was still in the tank and the US economy apparently stuck in no-growth even a year after the official end of the dot-com recession.

Household was the largest provider of subprime mortgages, a sketchy proposition to begin with but one made more so by Household’s sketchy past history. Only a month before the announcement, the subprime financier was fined $484 million to settle charges that in a dozen US states it had deceived customers into paying excessive interest rates. Sir John, however, was unfazed, declaring to the media, “Our due diligence shows us Household has dealt with this problem effectively.” It was a poor omen.

So badly did HSBC want in to the US market that the notoriously frugal bank chief even agreed to questionable payments to get the deal done. HSBC would pay the dental care costs for William Aldinger, Household’s chief, and his wife for the rest of their respective lives. Those were just some of the perks Aldinger received, including a hefty three-year pay contract as well as a private jet.

This was not unusual, however, as all banks at that time placed growth above all other considerations. That was just how it was, as risk was thought very low even in categories like subprime where questionable characters like Household lurked. No matter all the contradictions that were actually quite obviously if you ever bothered to look, there could only be expansion. Growth itself, balance sheet growth, was the currency of that time.

Unfortunately, it remains the literal currency of the global economy even today. HSBC was one of the first to get into trouble, hitting the news with subprime in early February 2007. Where just a few years earlier any bank would have given what HSBC did to acquire them, the operation was unceremoniously shut down in March 2009.

HSBC is yet another bank that shows very well what is wrong with the global economy, because what is wrong is entirely about more than just the post-crisis era. We talk about a “dollar” shortage and there clearly is one, but the saga of HSBC demonstrates that this chronic shortage is just a symptom of the wider problem. The history of the bank’s balance sheet is one that is immediately recognizable in so many other forms: 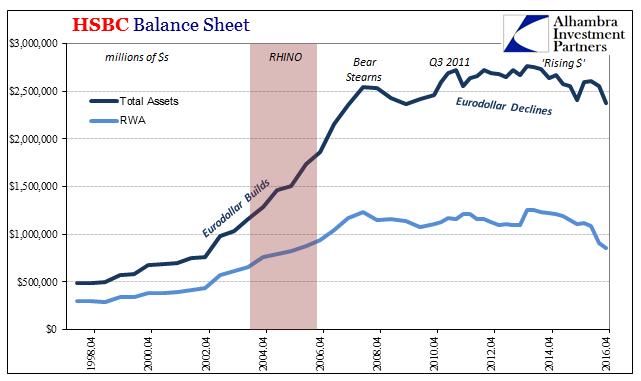 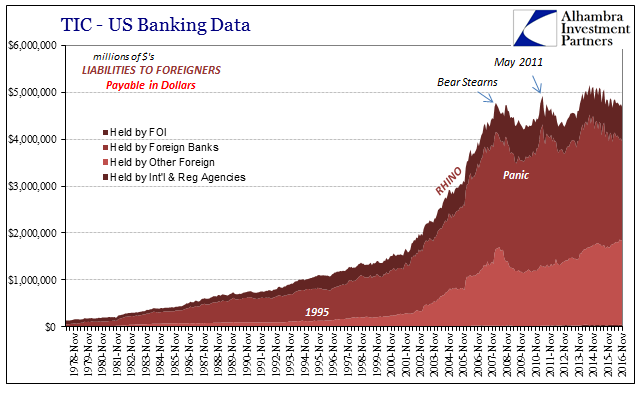 Not only do we find a balance sheet that overall is refused any growth anymore, we also see the various ways in which the bank is desperate to still cut back risk (the ratio of RWA to Total Assets) all these years later after the crisis had supposedly ended. Risk-weighted assets are now barely a third of total assets, suggesting who it is that might be buying all those German 2s and UST 10s (severe liquidity preferences). 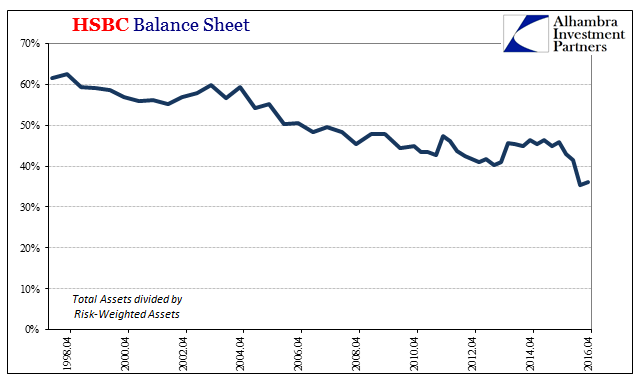 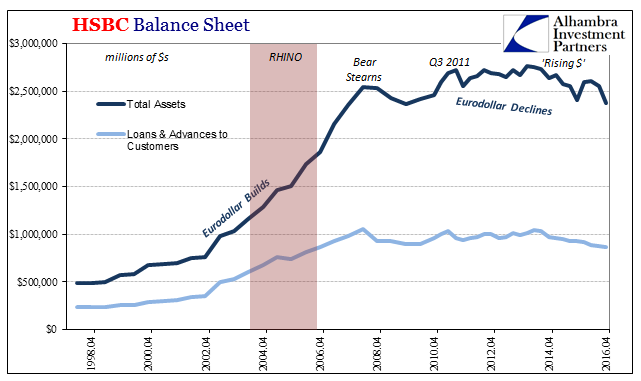 The problem for HSBC, as well as any of the other eurodollar money dealers, is that they can’t get out from under all those pre-crisis assumptions that keep going bad. Apart from Household International, HSBC bought Republic National Bank of New York in May 1999 in order to increase US exposure, here in private banking. The purchase of Republic doubled overnight its private banking pipeline. John Bond at the time stated the ethos of the eurodollar system in the form of buying up Republic (and a few others):

And it has become another problem area for HSBC. The unexpected losses reported by the bank earlier this week are in large part a reflection of these problems, with private banking now weighing down the overall operations in a severe and sharp manner. But it wasn’t as if the company outside of its private banking division is doing well, either. It’s the antithesis of the pre-crisis eurodollar system, where then these institutions believed no risk was too great because there would only be reward, but today global banking has been turned totally around to all risk with no reward.

“The Brazilian disposal highlights the key problem for HSBC — not only is the quality of the bank’s earnings weak, as evidenced by yet another messy set of numbers…but the quantity is lacking as the lender is still trying to shrink itself back to health,” said Russ Mould, investment director at online investment manager AJ Bell.

It probably could not possibly have been better said, “trying to shrink itself back to health.” That statement is apropos of so much more than HSBC. As I wrote earlier today, the eurodollar system never really made much sense even from its origins (whatever they were) but that just didn’t seem to matter.

What happens, then, when transaction costs are imposed, or, more realistically, become relatively more significant even if just in perception? I believe we are and have been for just about a decade now finding out that answer. Without exponential growth, these inherently destabilizing factors of often direct contradiction become more paramount in the further consideration of participation within the system. It’s another way of looking at risk/return. When growth was geometric and sustained, leading all participants to conclude and expect that growth to be sustained in perpetuity (an unreasonable expectation, of course, but this is finance, after all), there was very little perceived risk including those of unresolved externalities.

In other words, as with the Great Depression in the 1930’s, there is just no going back. You cannot recreate what was illogical now that everyone knows without question that it was. What’s holding back the global economy is that all expectations have been predicated upon going back. “Stimulus” of every kind is a witness to that intention, to bring about the prior economic trend (and, primarily, to use the banking system to do it!) without any regard as to whether that might be possible. Authorities around the world have simply assumed all this time that it was, like Sir John not really doing much if any due diligence to confirm.

This is the problem that has unified the global economy in ongoing depression. There is an enormous unsolved dollar degeneration, really “dollars” when including the more exotic elements of the offshore system in total, that can’t be met by other means. When confronted with the overwhelming evidence to this effect, there is only unserious conjecture offered mostly for why it just can’t be the case (something about bank reserves and the Federal Reserve). For the very few who might contemplate this huge intellectual chasm, they almost always look upon regulations as the primary if exclusive culprit (Dodd-Frank robbed banks of prop trading and forced costly inefficiencies, therefore if we get rid of Dodd-Frank then the eurodollar rises again).

These are all false diagnoses that proceed from very false assumptions (gradation of the word “false” is warranted here). What must be considered is that the eurodollar is itself simply unfixable.

HSBC is merely the latest in a very long and expanding catalog of real world (not statistical) and highly compelling evidence to that effect. As I wrote above, the data is perfectly consistent to the point of being overwhelming.

There is a recovery to be had, and I figure it to be a big one, perhaps greater than anything we have ever seen, but it can’t ever take shape until this open and obvious deficiency is resolved. We would rejoice at banks shrinking like this but for the unforgivable exception of a global economy still dependent upon this illogical credit-based monetary regime. We shouldn’t try to reverse those bank inclinations, instead we should be reinforcing them by ridding ourselves entirely of credit-based money.