Industrial Production rose sharply in April 2017, up nearly 1% month-over-month (seasonally-adjusted). It was the largest single month increase since February 2014 during the depths of the Polar Vortex. Steady contributions from the oil sector as well as a rebound (of sorts) in Motor Vehicle Assemblies added to the gains.

Year-over-year, IP was up just 2.2% in April despite the monthly rise. Though that was the largest annual increase since January 2015, it is still much slower than the pace of 2014 as well as by historical comparison. Thirteen months after the trough for IP reached during the 1990-91 recession, the series also after a sluggish recovery start registered 4.2% growth, nearly double the pace of the current period. 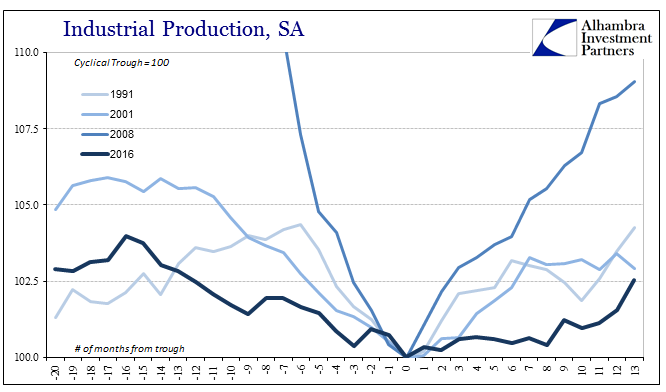 The current rate of expansion is even behind the “jobless” recovery after the dot-com recession. Assuming the rise in the current month is more than just monthly variation, unless there is serious sustained acceleration the industrial sector will still remain on the same positive if overall depression trend. The latest monthly index estimate continues to be less than the “cyclical” peak reached almost ten years ago, as well as far off the reduced pace set in early 2011. 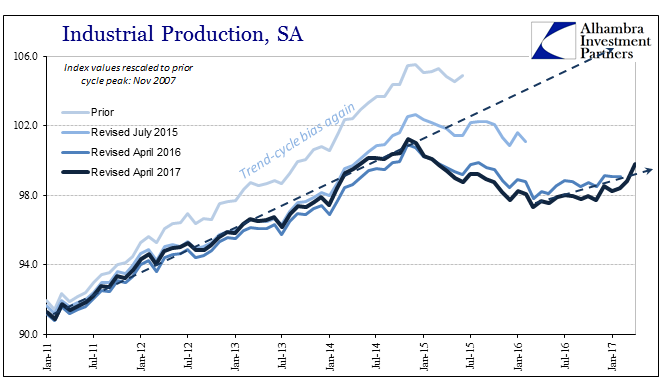 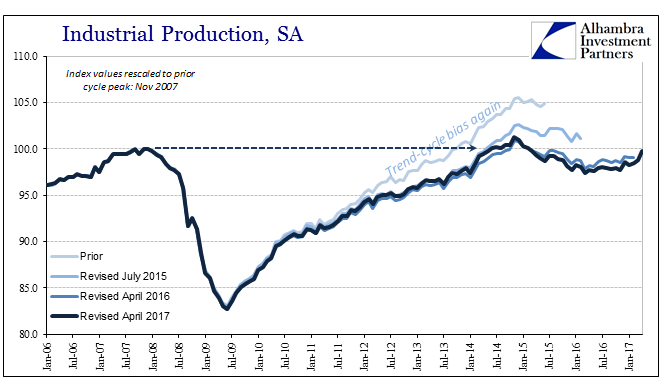 The monthly increase in Motor Vehicle Assemblies was substantial but following a month (March) where production was at the lowest rate in over two years. While it aided in the monthly increase overall, the data continues to suggest mild but ongoing contraction in the domestic auto sector. Year-over-year Motor Vehicle Assemblies were down 1.9%, the fourth straight month of contraction, and nine of the past twelve. The 6-month average is likewise -1.9%, suggesting continued struggles for the motor vehicle segment, and therefore a serious economic drag beyond this single month. 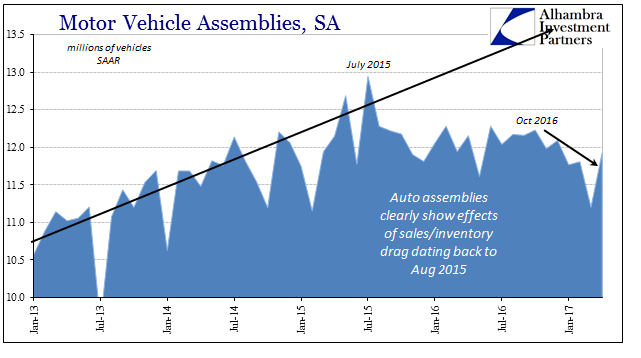 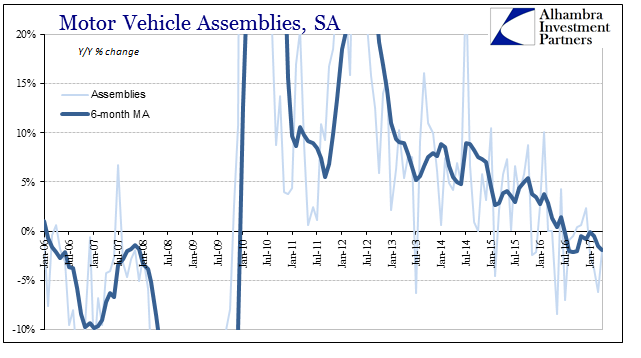 Anecdotally, Ford Motor Company was forced to deny rumors that it was planning layoffs for 10,000 salaried workers from among its 200,000 employees. Officially the company refused to make any statement other than to reiterate any such cuts would be part of its planned $3 billion in cost reductions already announced, and that job reductions would be more voluntary than not (Ford is purportedly to offer generous early retirement packages to its salaried base).

Even so, the rumored size of the labor reduction though not yet affecting production workers is surely due to the large incentives currently being offered by Ford and other carmakers just to keep sales moving at the “plateau” Ford executives were predicting last year. At such high final price reductions, profits are going to suffer making incentives at most an intermediate term measure. In the company’s last quarterly conference call with stock analysts, CEO Mark Fields said:

We are continuing our intense focus on cost and the reason for that is not only mindful of the current environment that we’re in, but also I think preparing us even more for a downturn scenario. [emphasis added]

The scale of the labor reductions would seem to be in keeping with the highlighted portion, and thus possibly only the first step of perhaps several other similar less minor business adjustments to come. Whether these economic mitigations are replicated at other manufacturers will be crucial to determining how the economy performs from here – either merely the same sort of substandard trend, or going back to something more like 2015.

The production of crude oil continued its resurgence in April, the other segment of US industry that will likely be involved in any possible inflection. The current series using the latest benchmark estimates shows an absolute low reached in September 2016. From the peak production level hit in April 2015, the data suggests a decline high to low of about 11% over those seventeen months. It had by the end of it become a drag on overall economic circumstances beyond just the statistical effect for IP. 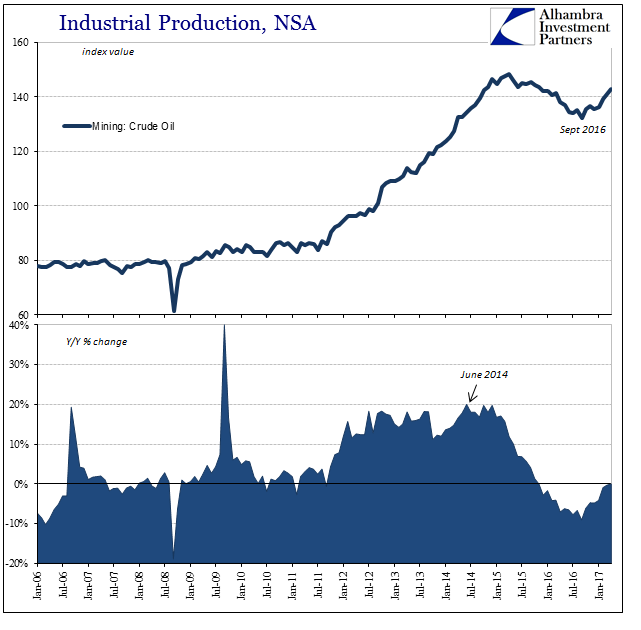 Since last September, IP in oil is up more than 8% in just seven months’ time, the kind of sharp rebound usually associated with cyclical patterns. The problem for oil producers, US industry as a whole, and the overall economy is whether this resurgence is sustainable given the reluctance of oil prices to surpass $50 or $55 (WTI). As noted yesterday, there are already soft, anecdotal indications of at least an unease almost certainly related to the oil price.

If oil producers start to get nervous again, they would likely project that unease back up the economic chains of second and third order effects, where it almost looks like the annual change in the price of oil has become the template by which all statistical accounts are tracking…There has to be real processes that mimic the results of the CPI as to actual manufacturing, and it seems as if the marginal changes in the oil sector are the pathology of, to this point, said disappointment. The lack of momentum indicated by stubborn $50 oil is both the CPI base effect as well as the increasingly nervous oil producer maybe putting on hold again all those grand designs.

For April at least, the production rebound continues for oil, meandering everywhere else.