It was a busy weekend in retrospect, starting with Janet Yellen and other central bankers uncomfortably facing a global media that has become (for once) increasingly unconvinced. Reporters, really, don’t have much choice. The Federal Reserve Chairman might not be aware of just how much she has used the “transitory” qualifier since 2015, but others can’t be helped from noticing.

At the Group of Thirty’s International Banking Seminar in Washington on Sunday, Yellen tried to play it confidently:

My best guess is that these soft readings will not persist, and with the ongoing strengthening of labor markets, I expect inflation to move higher next year.

But she was also forced to admit to reality, or whatever counts for it in FOMC determinations, telling the assembled audience that she “recognize[s] that this year’s low inflation could reflect something more persistent than is reflected in our baseline projections.” That’s the message being sent by what is being called a “vocal minority” on the policymaking body.

The FOMC has never been as unified as is often presented, but this is different. This other faction is challenging root monetary assumptions – and for the same reasons reporters are increasingly jaded about “transitory.” Enough time has passed for central bankers to get something right.

Until this point, however, their views had been largely and controversially unchallenged. Ben Bernanke’s tenure, for instance, was from a media perspective laughably comfortable. He was given the benefit of the doubt even though the entirety of both of his terms had contained every reason for doubt (starting before “subprime is contained” and what that really meant monetarily).

This very modest skepticism, while healthy, arrives far too late. For far too long the global population, especially the working population, has been told uniformly that there is nothing wrong with the economy. What might have been unsatisfactory at any given moment was immediately dismissed as an unworthy claim, or if valid enough to engender some mainstream response then written off as something that was in the process of being fixed (the economy that “should be”) often by the genius monetary “stimulus” of whatever local central bank.

Conservative commentator Mark Steyn once wrote that, “If the political culture forbids respectable politicians from raising certain topics, then the electorate will turn to unrespectable ones.” We don’t often think of that process in terms of the economy because Economists have been sitting upon their pedestal for so long. Their views have gone wholly unopposed for what seems to have been several lifetimes, leaving many to believe that Economics is the one part of politics that is done right.

And so we have to note along these lines what also took place this past weekend, according to the New York Times:

An anti-immigrant, anti-Muslim party won the Austrian elections on Sunday, and its leader might form a government with a party founded by ex-Nazis.

So much for the hopes of spring that election results in the Netherlands and France hinted that the political tide in Europe had turned away from the far right. Last month, Alternative for Germany became the first far-right party to enter Germany’s Parliament since World War II, winning 13 percent of the vote and 94 parliamentary seats.

I always hope and try to keep politics out of all this, or at least in terms of “left” or “right” or various factions and parties. It is dry analysis of risk, after all, that we are after. To me, it’s all a political mess with blame spread pretty evenly that in 2017 is operating much in the way Mr. Steyn warned. I also don’t mean to distill complex pathologies like those that might exist in Austria into the simple economic sphere, nor make light of them, but it is hard not to notice the pressure the combination of a broken economy plus the political class steadfastly refusing to acknowledge that it is broken places on a body politic. 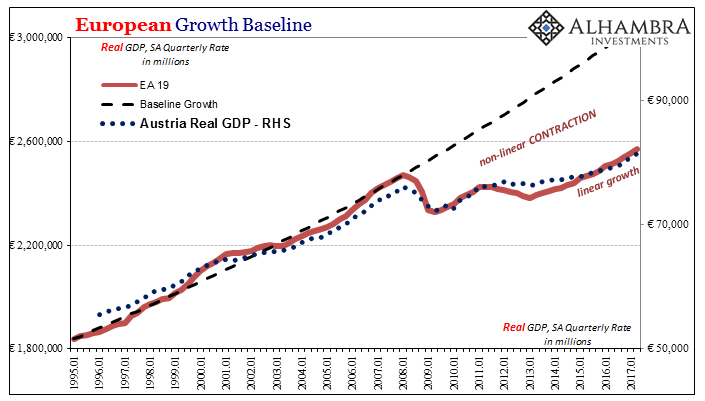 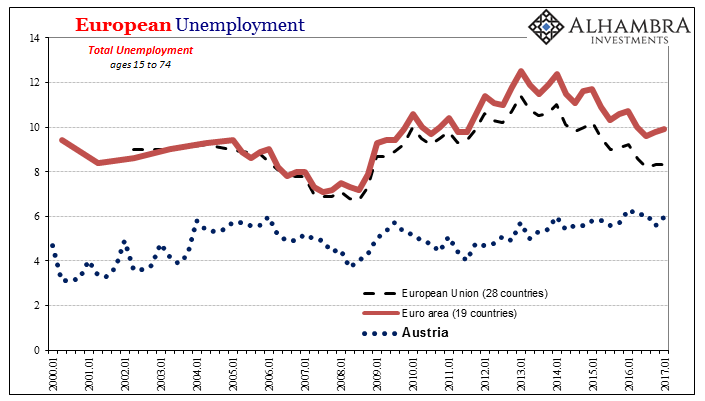 It doesn’t matter the absolute level of unemployment in Austria, for example, is this year “only” 6%. What I suspect matters to most Austrians is that when the ECB undertook LTRO1 at the end of 2011 it was just about 4%. Austria’s economy, like the rest of Europe’s, or the rest of the world’s, has never recovered from the Great “Recession.” The people of Austria may not be intimately familiar with the charts above, but they obviously feel it on an intuitive level (manifesting in the impossible to measure lack of opportunity that stagnation features).

That kind of economic burden is too much for any system (except Japan’s, as the exception proving the rule) to withstand for so long a time. The necessary result is the splintering of political and social cohesion into smaller blocs that offer different solutions to the same problem given different spin. There can’t be much cohesion because nobody has any real answers, or as the so-called establishment refuses to permit much discussion on the problem, so people turn to what they find in their experience to be the most plausible (sounding). Distrust hardens.

And it all starts with people like Draghi and Yellen who continue to plead some degree of ignorance, to claim that there is no problem that enough time won’t fix. Time is instead running out.