Retail Sales (US) Are Exhibit #1

Retail Sales (US) Are Exhibit #1

In January 2016, everything came to a head. The oil price crash (2nd time), currency chaos, global turmoil, and even a second stock market liquidation were all being absorbed by the global economy. The disruptions were far worse overseas, thus the global part of global turmoil, but the US economy, too, was showing clear signs of distress. A manufacturing recession had emerged which would only ever be the case on weak demand.

But the Fed just the month before had finally “raised rates” for the first time in a decade, though after procrastinating all through 2015. Still, surely these wise, proficient technocrats wouldn’t be so careless and clueless as to act in this way during a serious downturn. After all, what are “rate hikes” but the central bank’s shifting concerns toward a faster economy perhaps reaching the proportions of overheating.

The dissonance was striking, nowhere more so than at the Federal Reserve itself. On the day the FOMC voted for the first of what was supposed to be (by now) ten to fifteen increases (not just four) the central bank also released estimates on US Industrial Production that were negative year-over-year, a condition that just doesn’t happen outside of either a recession or a condition very close to one.

The mainstream sided easily and eagerly with the technocrats. Even as the Fed failed to act month after month, the word “transitory” printed prominently in each article rationalizing why a manufacturing recession just wouldn’t matter, the media would claim how “strong” and “resilient” especially US consumers were.

I often wondered then ,as now, just who was the audience for those pieces; the public, or the media itself. Flipping through them, these always positive stories read almost as if the person writing them was trying to convince himself or herself. “It can’t be bad, the Fed just raised rates.” Dissonance.

In February 2016, Bloomberg reported on retail sales for that January, the month at the worst end of what the “rising dollar’s” full rise was achieving. Under the headline U.S. Retail Sales Increased in January in Broad-Based Advance we learn not about the state of consumers within the economy but the lengths to which self-delusion to preserve a disappearing worldview will go:

Retail sales increased for a third straight month in January as Americans kicked off 2016 by spending freely on cars, clothing and online merchandise.

And it’s not like there were massive revisions over subsequent years that drastically altered the estimates for January 2016. In fact, retail sales for that month were revised higher over the two benchmark updates since. It was instead, again, pure delusion. There really is no other alternate explanation. 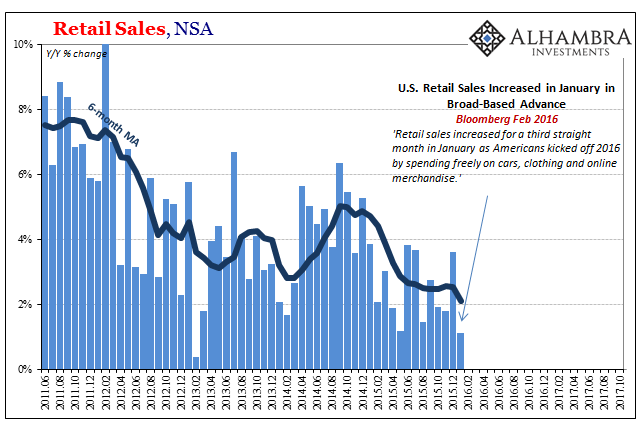 It is straight rationalization, the fixed point for the expressed view being the economy of Janet Yellen’s imagination. In other words, because the Fed declares the economy doing well, fixated as they are on the unemployment rate, then the media describes everything in those terms – including some of the worst retail sales in the entire data series. It is pure Aristotelian syllogism (Janet Yellen says the economy is doing well, retail sales are not negative, therefore consumers must be spending freely), not Enlightenment science.

Retail sales in reality rather than the Dark Ages narrative remained in that same depressed state until the middle of last year. They averaged 2.72% growth from January 2015 to July 2016, a level of “growth” consistent with recession in more than just manufacturing (corroborating the contraction in Industrial Production that revisions now show was longer and deeper than originally figured).

In the fifteen months since last July, including the latest monthly update for October 2017, retail sales have averaged 3.81% growth. That’s it. It’s hardly the stuff of overheating or even rate hikes, a non-transitory state of weakness that is difficult to impossible for many to comprehend given Yellen and the unemployment rate. It doesn’t even match 2014. 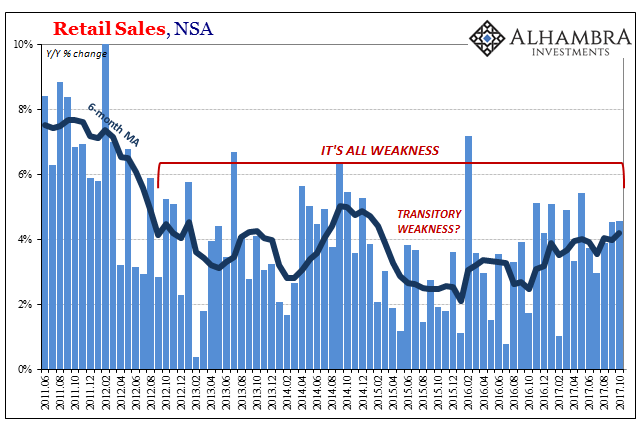 So the syllogisms roll on and on (today from who else but Bloomberg):

The broad-based advance in October sales and a stronger hand-off from an upwardly revised September show American consumers will continue to fuel the economy in the fourth quarter. Steady hiring, rising asset values and limited inflation are underpinning consumer spending.

There just isn’t a level of weak consumer spending that won’t be described in the most glowing terms. In modern logic, it’s a fallacy in the cult-like obedience to authority, in this case monetary officials at whatever central bank. So long as they continue to raise rates, as in the Fed’s case, and proclaim the economy strong all the data is immediately colored in the mainstream by those terms alone; rather than the data performing as necessary evidence to validate, or deny, the official subjective opinion.

It’s the parallel in economic data to persistent denials about what the yield curve is saying (the same thing as retail sales). 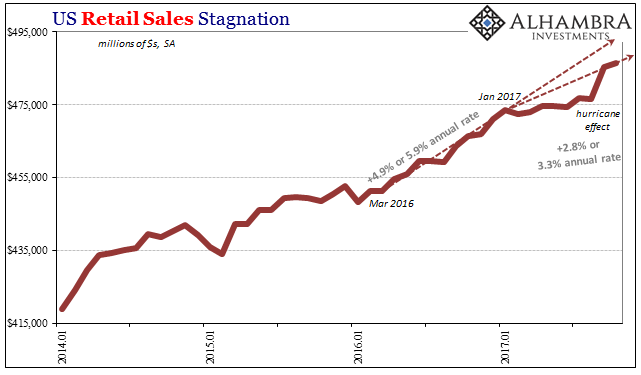 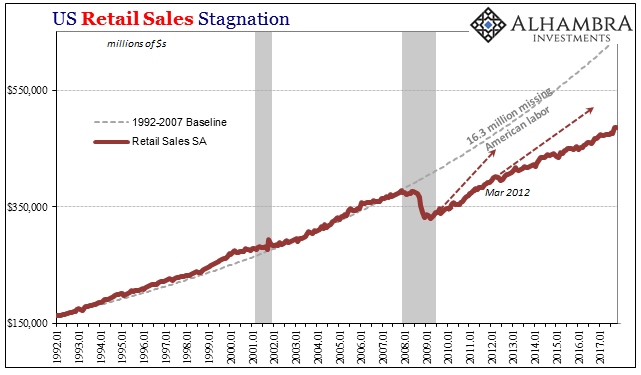 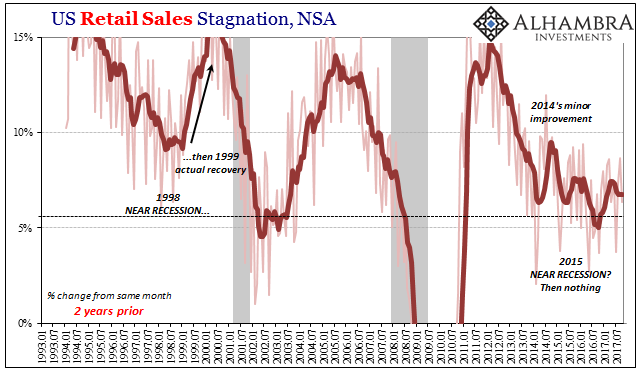 The big problem is not strictly economics, but rather Economics. In other words, this can only sow further division and mistrust because the economy is not strong in any way. The longer it is described as robust and all its related qualifiers, the more regular people who are struggling (as retail sales actually show) are forced into one of the following conclusions: the economy is booming but I don’t see it, so it must be rigged against me and people like me; or, the media is lying to preserve the status quo at all costs.

The first is Bernie Sanders; the second Donald Trump. Both are populist appeals to answer questions the mainstream flat out refuses to ask.

I had expected most media commentary to shift dramatically on January 20, and clearly it hasn’t. That’s an important clue about what’s really going on, and what it really means. It’s how the Fed can go from Republican to Democrat back to Republican and never change.

What is suggested, for more than just Bloomberg, or the financial media in general, is that the anchoring of their worldview is not specifically partisan, R or D. Rather, it is allegiance to the technocracy, or at least the idea of it whose execution isn’t so technically incompetent that it forces its adherents and admirers to call US consumers during a pathetically weak economy facing another downturn “strong”, “resilient” or any other similar description. For the technocracy to fail now would be devastating to more than just emotion, it would be a huge blow to Utopian dreams that have been building (not just the EU) for a century – and for a great many in position of influence who believe innovation (statistics, especially) has in the 21st century put that technocratic Utopia within actual reach.

Why is there increasingly mistrust and division all throughout the world? This is Exhibit #1.