Another Confesses The Impossible, We Might Not Have Known What Were Doing

Another Confesses The Impossible, We Might Not Have Known What Were Doing

When you go around claiming that central bankers don’t know the first thing about money, people tend to think you are crazy. It’s not really their (people’s) fault. Not only have we been conditioned to believe in a technocracy of sorts, it is raw human nature to immediately suspect such a radically contrarian view.

It would be one thing to say, well, central banks screwed up and were behind, making a few big mistakes along the way and we had the pay the price for it. Even that would be hard for some to really accept. But to make the indictment that they really don’t know what they are doing even on the most fundamental level just cuts way too deeply against convention. Your natural instinct is to believe there is no way that could possibly be true.

The Maestro, after all.

Yet, if you actually take the time to listen to what they say, and have said in the past, they do admit as much. It’s never summarized in that fashion, of course, and any potentially negative implications are downplayed or dismissed.

Since the Great Inflation monetary policy has been quite intentionally stripped of money. Banks evolved and there was really no easy way to define money beyond a certain point (in the sixties), so Economists just gave up trying. This is no small thing, but in Economics it is treated trivially.

Around the same time, Positive Economics, or econometrics, came into its own. It was widely accepted as one possible answer to a lot of academic problems. Rather than being forced to study incessantly the dizzying complexity of any economic system, econometrics offered a short cut. Define a few big correlations and that was all that was required.

But first, Economists had to solve markets. Before the seventies, most mainstream econometric models tried incorporating an “adaptive” expectations regime. This assumes that economic agents, including those operating in any financial markets, are always backward looking, forming their expectations from only past conditions and data.

Not only was it a theoretical problem, it was also a mathematical one leading to incomplete regressions and equations riddled with infinities. John Muth began the trend toward “rational” expectations, a journey ultimately completed by Robert Lucas (and Thomas Sergeant). The singularities disappeared from the math and efficient markets were born. No need to try and understand how markets form expectations and prices, Economists will just assume they use all available data and work themselves out efficiently to the best forward-looking position.

Once you’ve made such assumptions, what use to further study markets and therefore credit-based money? The modern central bank model was complete in its stunningly arrogant simplicity. It need only push around a single money rate and from there it actually expected to control the marginal variations for the entire economy. It didn’t know how or why, it just expected from that single input predictable outcomes would result.

What these neo-Keynesian DSGE models “knew” about money and finance was nothing other than simple maturity transformation: the central bank lowers (or raises) the money rate, that steepens (flattens) the asset yield curve as desired, making it more (less) profitable for depository institutions to make additional loans, therefore banks stimulate (retard) additional economic projects.

But what if the biggest source of credit doesn’t originate from depository institutions? And what if these other financial agents use very different sources of “money” and funding? Greenspan worried about the “proliferation of products” banks were substituting for traditional money, little did he know it was a proliferation of a proliferation.

In public, these questions appear to be all but forbidden. No Federal Reserve official has ever been made to answer them. In private, as noted so many times before, they did particularly Alan Greenspan who fretted about such grand ignorance, but for the rest of us we are supposed to be content with this shockingly incomplete basis for a purported technocratic enterprise of still some great esteem.

Mario Draghi, for example, says in 2018 there is no evidence that European inflation after years of QE is about to breakout, but he believes it will anyway because of QE and so his belief is written as truth at the direct expense of years upon years of contrary evidence.

As I’ve also written, what is so disheartening about these small economic upswings like the one we are experiencing now is that they all but erase the public’s curiosity about these big questions and more importantly the urgency to try to get someone to answer them. In 2015 and early 2016, in particular, the trend was very much in the right direction. Policymakers were openly nervous and uncertain; it was palpable at times. Everyone could see that “something” was missing, and that something was a big deal.

Now? Nobody cares (again) – at least until the next one.

FRBNY President Bill Dudley is retiring. In addition to holding the most important post at the most important branch, before that he was the head of the Open Market Desk during the most consequential nineteen months in modern economic history. There is a reason why I quote him most for the crisis period, the same reason he, like Bernanke, is already starting to try and reshape his legacy. 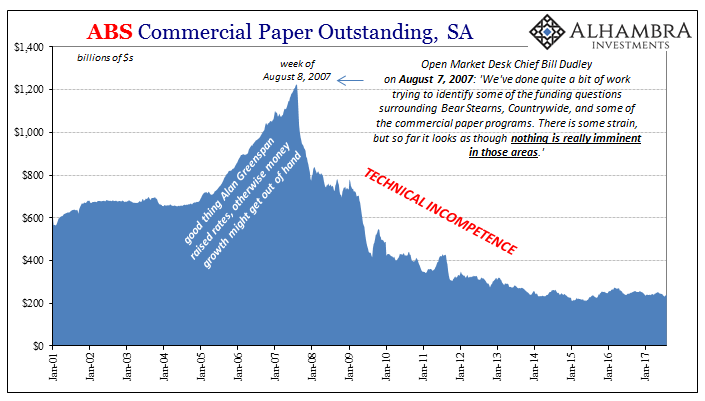 The revision to history, at least for Dudley, began Friday as an internal interview posted at FRBNY’s Liberty Street Economics blog. He begins by absurdly claiming Economists are truth seekers:

So economists may be a little bit more open-minded to the facts—not to say that lawyers aren’t, but a lawyer’s job is to do something, to advocate a position, to protect a positon [SIC]. So they’re starting with a very strong a priori view. I think economists start with a priori views, in the form of a hypothesis, but if the evidence is inconsistent then they start to change the theory and hypothesis, as opposed to arguing that the evidence is obviously not applicable.

You don’t get four QE’s if this was in any way true. You just don’t; one was enough of an experiment. Two maybe to test a different variable, but after what happened in 2011 the whole paradigm of bank reserves would have been tossed into the East River if these were anything like faithful scientific principles.

Dudley follows that up with some examples, casting himself in the role of the scientist though careful to construct his new narrative so that his evolving position is never anchored to any big, historic events in the recent past where such evolution might have instead proved beneficial. All you are supposed to know is the he is learning, not pay attention to when or how it might be way, way too late.

This is where the Fed’s push toward limited transparency is going to, ironically, haunt them for decades. He can claim what he does above, but it’s all there in the transcripts directly contradicting him. As head of the Open Market Desk, he truly believed, as the global monetary system came crashing down around him, that big cuts in the federal funds rate would make everything better. They all did because they just assumed it (maturity transformation) worked that way.

In addition to the above, Dudley makes another stunning admission because, again, he is retiring and transparently wants to start rehabilitating his reputation.

One of the challenges going into the financial crisis, for example, if you look at the big DSGE model—dynamic stochastic general equilibrium model—it didn’t include a finance sector. So the whole experience of what actually happened during the global financial crisis—the collapse of the financial system and that taking down the real economy—wasn’t an actual possibility within the major macro models that some economists were using to forecast the economy.

The problem with trying to claim “it’s the models fault” is, again, the transcripts. Starting with the association of “some economists were using”, we are supposed to believe that he isn’t included in that group. He most certainly was.

The FOMC followed the Greenbook and other modeled assessments as their forecasting gospel. It’s why as late as July and August 2008 they were still thinking that through their own skill in handling the crisis to that point, largely Bear Stearns, the US economy might even manage to steer clear of any recession – even though one had already begun the prior December (unbeknownst to rational expectations theory) and by that summer had already experienced the first rumblings of collapse.

The real issue is why Bill Dudley is talking about all this now rather than in, say, 2011. In January of that year, FRBSF researchers published a paper totally exposing the economic illiteracy this doctrine of shortcuts demands. 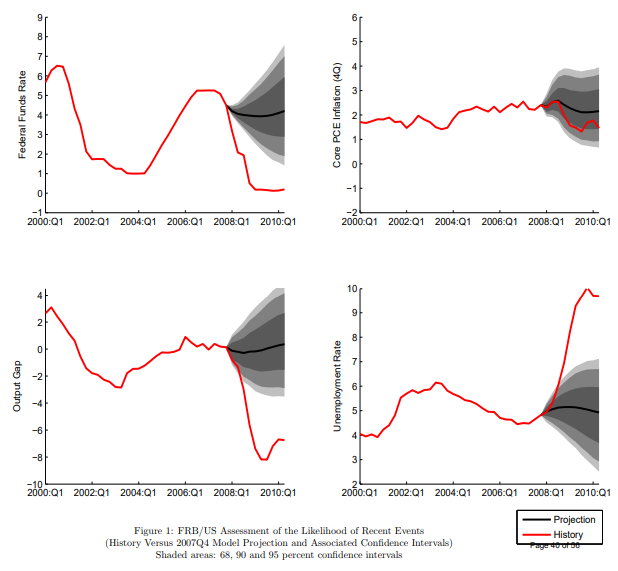 What you see above taken from that paper is exactly what policymakers expected to happen vs. what did happen that they thought was impossible (almost all the red lines in all the modeled runs were more than six standard deviations from projections). Bill Dudley, on the verge of retirement, admits to you now a decade later what could only have been helpful more than eleven years ago. They really don’t know what they are doing. They never have.

FRBNY’s outgoing president unintentionally highlights both of our major problems, each relating to Economics as an ideology rather than scientific pursuit. First is this rule of principled ignorance. In econometrics, the math is all that matters when instead there are very real circumstances where we might wish to understand why the math might not matter at all. Substituting statistical competence and comprehensiveness for on-the-ground understanding of, you know, an economy is a potentially fatal blindness. It sure was starting on August 9, 2007.

The second gets back to the first of Dudley’s quotes above. Economists never deviate from their models. These statistical constructions are treated like they are their children. They start with a hypothesis constructed from them and stick with it no matter what as if the models themselves can never, ever be wrong. Economists are irretrievably devoted to the math, or the economy that “should be.” These models made the biggest of all big mistakes and still they persist as if they are in any way useful.

Yet, it still sounds preposterous to most people when you write or speak about how there is no money in monetary policy and how Economists don’t know the first thing about the economy. It is important to pay attention to when they actually admit it, and to broadcast the confession as far and as wide as possible especially during another limited upswing, before one lost decade turns to a second and what then might happen as more of the impossible.