What A Difference A Few Months Make, Highest Inflation in Six Years And Market Shrugs

What A Difference A Few Months Make, Highest Inflation in Six Years And Market Shrugs

What a difference a few months make. Perhaps given all that has happened since January people have regained some badly needed perspective. The core of inflation hysteria was the belief the economy was about to take off which would exacerbate underlying price pressures. That would necessitate more aggressive Federal Reserve reaction, corroborated by an epic bond market selloff.

Had last month’s CPI number been released, say, last November, it would have been hugely entertaining. According to the Bureau of Labor Statistics, the consumer price index for the month of May 2018 was 2.80% more than May 2017. This inflation rate bests the 2.74% posted in February 2017 as the highest since the 2.87% recorded for February 2012.

The predictable headlines about the “highest inflation in six years” would have at the end of last year set off a disturbed frenzy. Instead, this update with all the same comparisons is being met with a collective shrug; at most a reasonably toned-down if disappointing murmur.

The difference is economy and risk, often one and the same. Unlike in 2017, in 2018 the global economy has encountered numerous issues and even more “transitory” difficulties that are getting harder to overcome. Right at the front is the “dollar.” Again.

With economic reality setting back in, what’s really going on with US (and European) consumer prices is a bit clearer, though in truth it was always perfectly obvious. Oil and little else is behind these index spikes. It’s the rationalizations about them in the narrative form that no longer weigh so heavily. 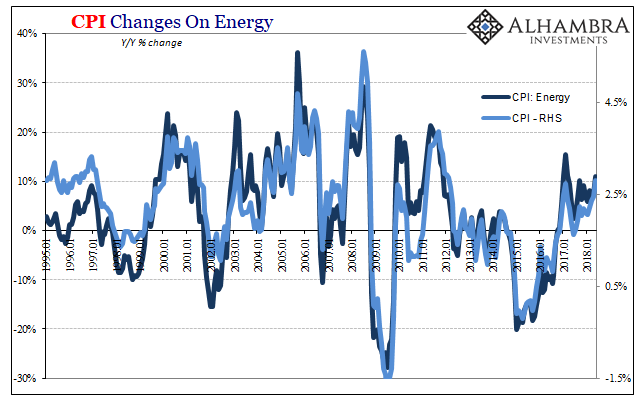 The energy component of the CPI jumped by 11% year-over-year in May. That’s the highest contribution since last March, when oil prices then were on their initial rise from the bottom in 2016 and being compared to those low levels.

The contrast between just energy and other so-called core inflation rates remains pretty compelling. Excluding food and energy prices, the core CPI rose 2.24% in May, up from 2.14% in April and a wireless data plan level of ~1.70% through much of 2017. None of these changes indicate a material difference in underlying conditions. 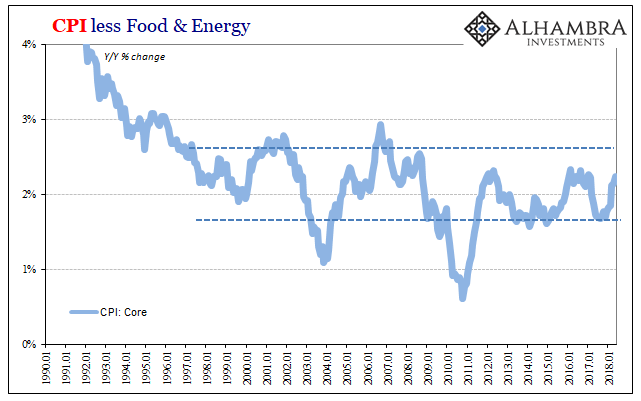 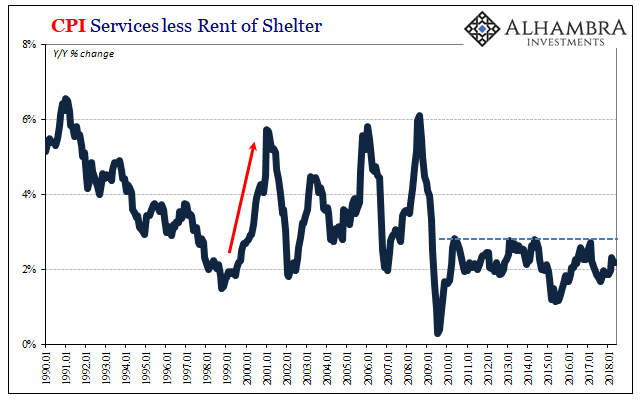 Market reaction has been muted, and not just today with the current release but, again, for the past several months in sharp contrast to how conditions were described under the hysteria. In TIPS trading, inflation expectations remain at best modest. In fact, even as they increased last year, they did so from still very low levels reflecting a more realistic market interpretation of what has been going on.

The economy, in these market prices, isn’t really picking up, rather what inflation expectations are saying is that the market isn’t as pessimistic as it was in 2015 and 2016. Those were crisis-level lows, so moving upward from them is no real feat. Inflation expectations across-the-board continue to be subdued in comparison to both before the “rising dollar” as well as what might pass for normal (precrisis). 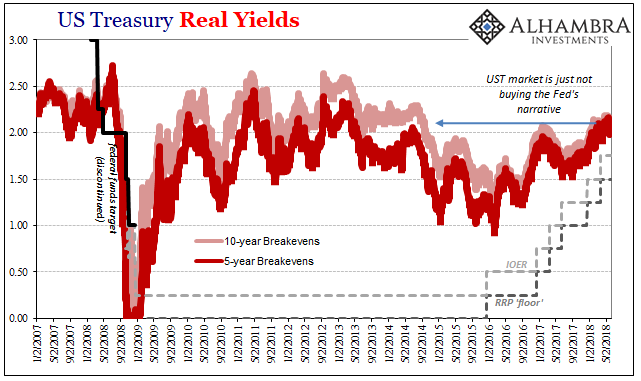 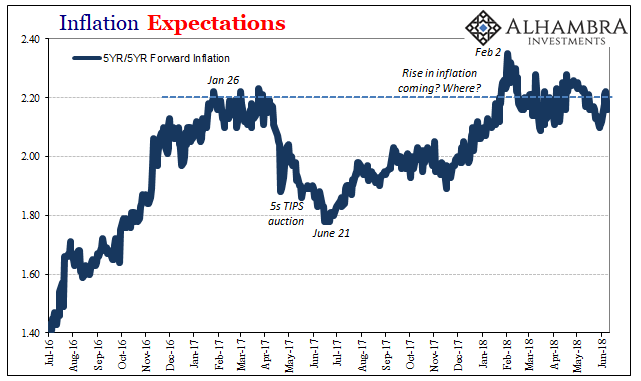 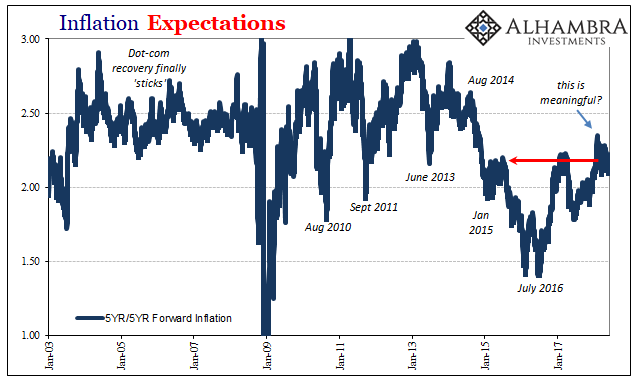 The 5-year/5-year Forward Inflation Rate is as low now as it was in the initial aftermath of the oil crash in early 2015. It is higher than it was last year and the year before at the lows, but this important market-based indication of inflation expectations in 2017 was equivalent to some pretty bad times in 2008 and in 2016 was equivalent to the worst of 2009. Being better than those does not equal good.

In terms of just TIPS, the interpretations are in this case beautifully direct. Inflation-protected treasuries are protected by the CPI. Therefore, anyone investing in TIPS has an immediate interest in this specific measure and more so expectations for it in the future. 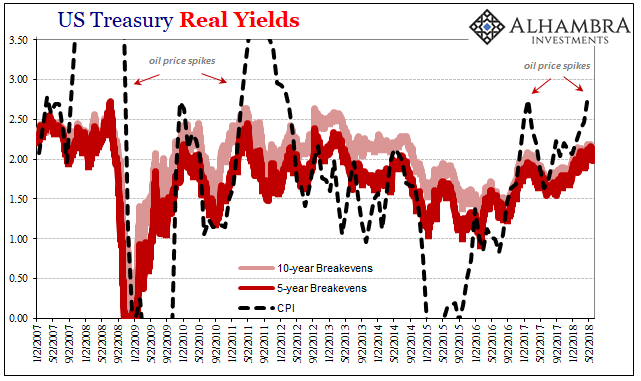 Like the jump in consumer prices in early 2017, inflation breakevens (the difference between the current yield on the same maturity UST bond or note and the current yield on a TIPS security; or, the amount of expected inflation compensation related to the average future projections of the CPI) are discounting the current one, too. In other words, the market is now seeing past the rise in oil prices expecting instead that over time inflation for the CPI index won’t average much more than around 2%.

To put it in Yellen terms, or now Jerome Powell, the somewhat better inflation figures (from the Fed’s perspective, certainly not for consumers without the benefit of the economy that was supposed to be behind all this) are being treated as transitory. It’s pretty solid evidence that the hysteria has, in fact, fully subsided. Having brought back down closer to earth, the question now is what happens when full reality sets back in.

Maybe we should ask Urjit Patel or Ilan Goldfajn.