It’s A Dollar Double Whammy, Just Not Theirs

It’s A Dollar Double Whammy, Just Not Theirs

First it was inflation. No, it was nuclear war in Korea. Then something about T-bills and government debt. And the ECB tapering while others were, too. Of course, before any of those there was 2a7. There’s always something, it seems, something different every time. Maybe it’s not any of them?

Small “e” economics will survive where Economics will not. The reason is that the simple laws of supply and demand actually work whereas statistical models of the big aggregates are nothing other than Economists fooling themselves and anyone following them. A supply curve, unlike a DSGE model, describes a real-world process to a reasonably sufficient degree.

If the demand for a commodity rises, the price will follow. The increase in price leads suppliers to raise the level of supply in response (yes, all else equal). There are frictions and lags to consider, where producers may not be able to react in immediate fashion. Over enough time, however, that’s how it works.

Money is a commodity that can be conjured at the stroke of a bookkeeper’s pen, to use Friedman’s eurodollar phrase. It isn’t exactly frictionless, but in operation prior to August 2007 that is certainly how it appeared. The global eurodollar system would create any form of bank liability necessary to keep the system not just well-functioned but also growing exponentially. There weren’t bottlenecks (think subprime).

Even as Greenspan’s Fed raised the federal funds rate during the middle 2000’s, there was no slowing the monetary factory system. In fact, during those RHINO’s the global banking system actually kicked it up a notch or two more. The “weak dollar” continued without fail until Bear Stearns nearly did.

In trying to explain what has been going on this year, central bankers all over the world have put forth a lot of ridiculous ideas to avoid the main issue. That isn’t bank reserves, though they all seem to think it is (it’s not hard to imagine why central bankers would think this way; would only think this way). Our own FOMC tried to blame T-bills for the recent bout in LIBOR. 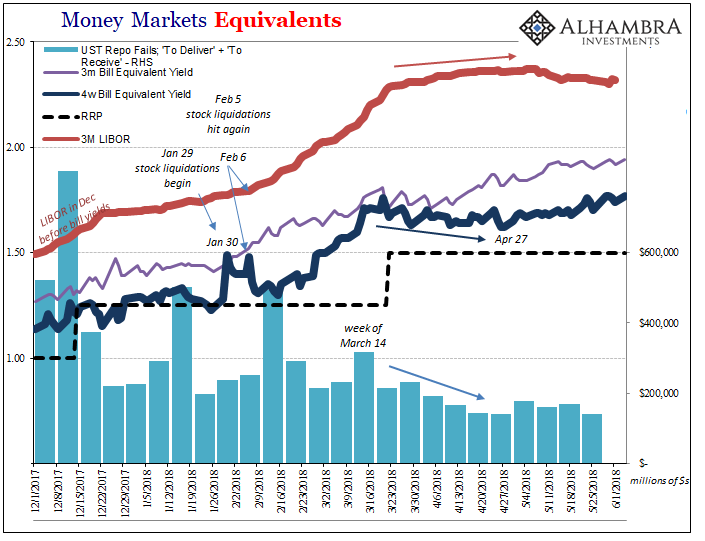 It was obviously untrue when the Federal Reserve first published the claim. Rising LIBOR (against OIS or whatever other control) is an indication of liquidity risk. It both preceded and followed global liquidations, including clear events in T-bills themselves.

But the government is still issuing huge amounts of bills, as is standard practice. If the fiscal situation changes, as it has this year under tax reform, any change in the deficit directly affects bill issuance. 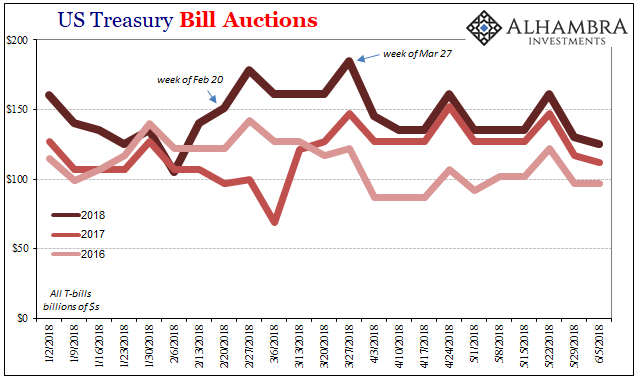 The actual record of bill auctions, however, doesn’t fit with the FOMC’s narrative. The so-called deluge didn’t begin until around the week of February 20 – nearly a month after the liquidation events starting January 29. Are central bankers really trying to claim that banks were hoarding “dollars” way in advance of this increase? It appears so, which tells you a lot about their story.

Furthermore, and this is the more relevant part, bill issuance since the end of March has dropped back toward 2017 levels. The EM currency crisis didn’t begin until April 18.

That’s another problem because on Sunday the Financial Times published an op-ed by Urjit Patel who attempts to blame this same sort of crowding out for what’s been happening to global currencies. Dr. Patel is the Governor of the Reserve Bank of India, the country’s central bank. His article clearly expresses exasperation over the situation, for once, though it is completely misguided in its focus.

This unintended coincidence has proved to be a “double whammy” for global markets. Dollar funding has evaporated, notably from sovereign debt markets. Emerging markets have witnessed a sharp reversal of foreign capital flows over the past six weeks, often exceeding $5bn a week. As a result, emerging market bonds and currencies have fallen in value.

This “double whammy” is, according to the Indian central banker, the Fed’s withdrawal of its balance sheet (lower bank reserves) coming at a time when the US government’s deficit requires more financing capacity. Even when they get it, they don’t get it.

I can understand Dr. Patel’s emotional position. The Indian economy is, out of all the EM’s, particularly well positioned as of right now. If there is one place you would not expect the looming outlines of currency problems, it is India. Despite that, the rupee has been sucked into the “dollar” vortex anyway. That fact alone describes extraordinary circumstances, not the simple crowding out inside of a fixed system.

And that’s largely what’s missing here. The global “dollar” system isn’t some static pool where if one deep pocket needs to fund more than it did before it can only do so at the direct expense of someone, or everyone, else. The global monetary system is not supposed to be this zero-sum game as all these central bankers aim to describe.

Let’s set aside the actual trend in bill auctions and assume anyway that the US government’s borrowing habit is the problem. So what if it is?

As noted at the outset, basic economics describes a situation where if the price of something rises (in this case, either by interest payment or, in FX, getting paid more via a lower counterparty currency) the supply of that something will respond in kind. That’s clearly not happening here, to the point that EM currencies are, like the hugely negative basis (XCurrSwaps) of 2015-16, suggesting that global banks are leaving huge potential profits on the table. If the US government is indeed the elephant in the room, global banks should be falling all over themselves at the opportunity to service EM funding needs (like they were last year). At the stroke of a pen (or computer terminal key), any bank can create the funding each country requires. 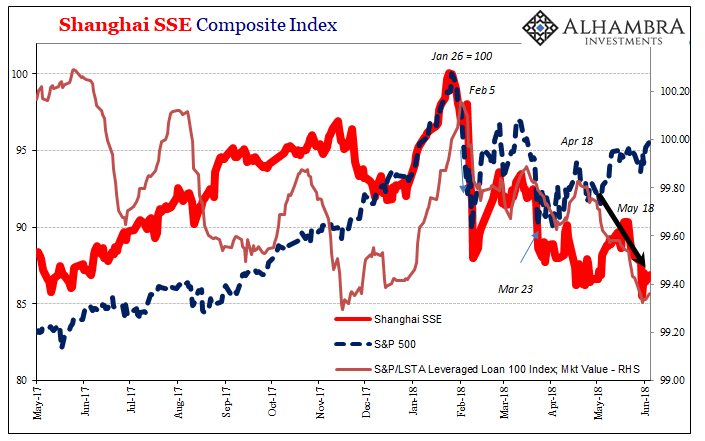 The narrative is missing a huge piece, fixed as it has to be to this idea of fixed funding capacities. The behavior of those currencies plus things like US corporate junk are huge clues as to what’s likely missing from it. Since April 18, US junk has traded “risk off” right alongside those exposed currencies, even as US stocks have rebounded slightly while foreign shares (like in China) have trended lower.

What Dr. Patel doesn’t include in his article is that a tremendous amount of the collective EM “dollar short” is attributable to corporate activities. So much eurodollar borrowing originating from these places is on par with US corporate junk. The risks are not just similar.

At the top of that list is the macroeconomic environment. The explosion of debt in the global corporate sector, denominated in dollars, means that the continued lack of economic recovery places them in a hard position that can only get worse the longer we go without. If globally synchronized growth were anything other than a hollow slogan, there would be no FT op-eds arguing about balance sheet normalization and the federal T-bill situation. These simply wouldn’t matter.

What’s going on here is a “double whammy”, alright, just not the one Economists in their ongoing monetary blindness refuse to reconsider. The global economy, contrary to their assessments, is not picking up, rather there are growing signs that after substantially underperforming last year it may already be rolling over this year and doing so from a relatively lower ceiling (compared to 2014, 2012, and 2007).

That might further propose the other part, where global eurodollar banks (especially in Europe) who had dipped their toes back in the “dollar” funding business under the “reflation” sentiment of the past two years or so are suddenly reluctant to expand on it, and after April 18 may actively be pulling back from it – refusing to take advantage of what may seem like tremendous profit opportunities that in a more realistic light appear to be only massive risks.

T-bills, it seems, are the new 2a7. The reason is simple; the people advancing these shallow theories start from a fixed position, the coming, guaranteed economic recovery. Nothing will derail them from this belief, no matter how much time passes (eleven years and counting) and how many downturns show up often right at the same time (2012, 2014) that recovery was supposed to. Because they refuse to consider any other alternative, there is always a bill problem or money market reform or the economy is going to be so good it’s bad.

Maybe it’s none of those things. Perhaps simple economics instead holds the answer.