There is just something about August. It is irresistible, apparently, in all the wrong ways. For starters, there are big ones and small ones but somehow they all line up against liquidity and plentiful eurodollar money. In the former class there was, of course, August 9, 2007, August 9, 2011, and August 10, 2015. Even in the latter category there was August 28, 2013.

If July was a reasonably calm month if only by contrast to April and May, August less than halfway through is proving the “dollar’s” larger move (not “weak”). I wrote last week about this deflationary decade:

Complacency may be rampant again today, but CNY is dropping despite the now open presence of the PBOC to countermand that direction. Risk perceptions are rising, not falling (yield and eurodollar curves). And some key indications are right up against the edge of breaking out; the wrong way. Gold’s threatening to fall back into the $1,100’s, EUR is just about May 29 again, and DXY is already marginally higher.

It’s tragically too perfect that complacency disappeared again last week during the eleventh anniversary of August 9. Gold is still just barely hanging in the $1200’s, but I doubt for long. The euro was blasted into the 1.13’s, and DXY was for most of today closer to the 97’s than the 95’s. 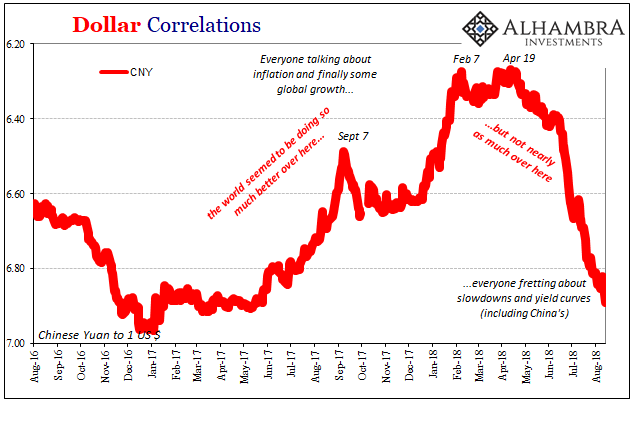 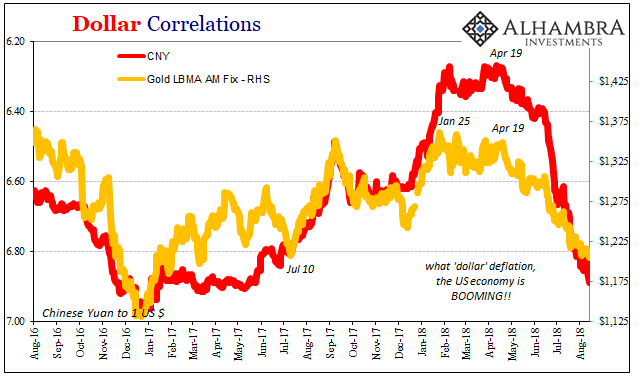 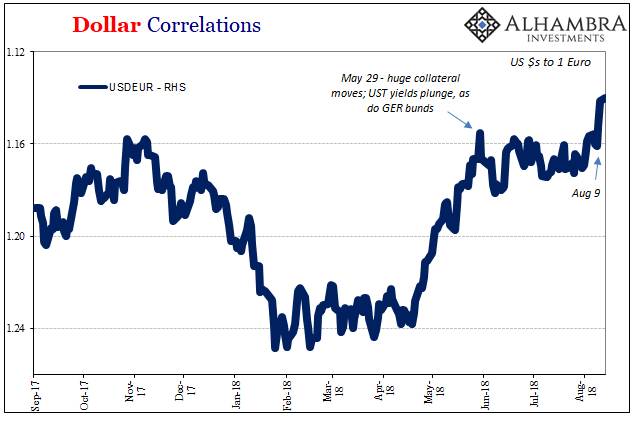 Among the EM’s, China’s yuan can’t find a stable range let alone price. The PBOC is there and it doesn’t help. India’s rupee has finally met 70, though I suspect Urjit Patel will have to go back to the Financial Times with some new reasons for this lamentable achievement. 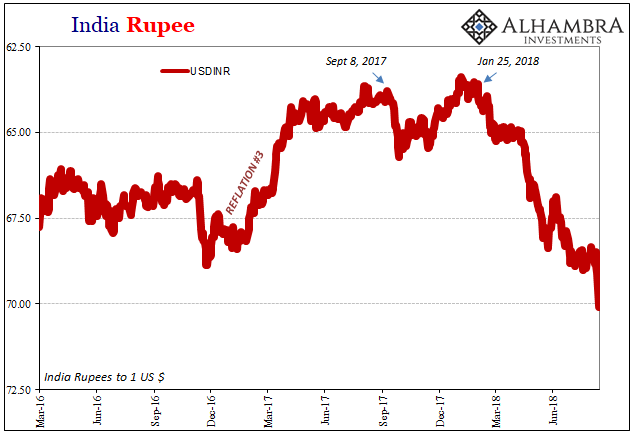 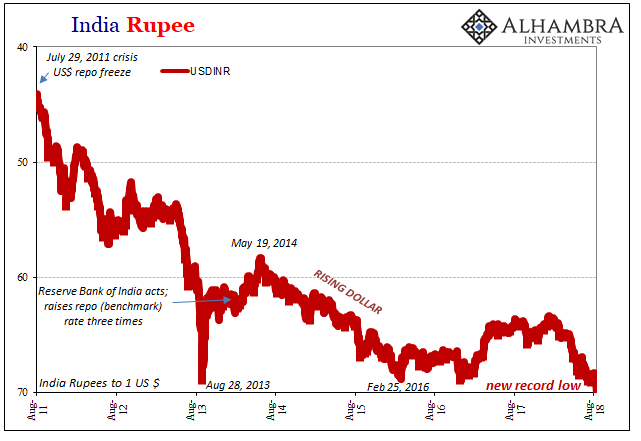 More than either of those two of the BRIC’s we have to look again at Brazil. July was relatively good in that particular country; August not so much. The question is therefore what might have changed.

One thing we know for sure, in June at least Banco do Brasil was hugely active in defending BRL (meaning, manipulating local currency dynamics such that local Brazilian banks were subsidized in borrowing “dollars” on global markets; these “short financial instruments denominated in foreign currency and settled by other means”). Combined May and June 2018, Banco entered into a mind-boggling $43 billion of these convoluted swaps. 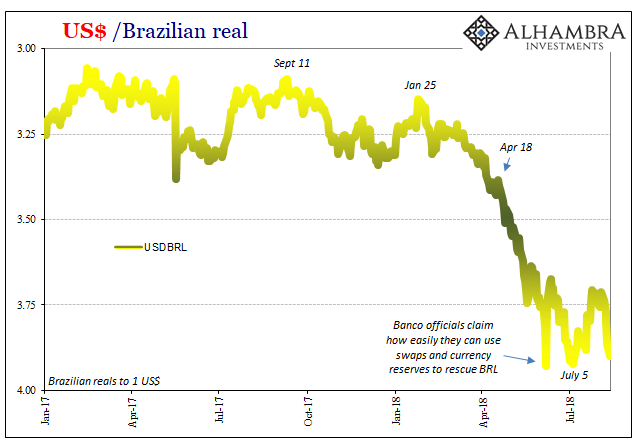 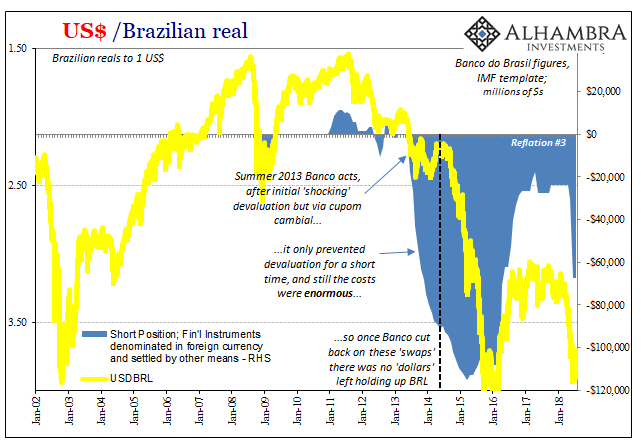 Not according to the latest update. The central bank itself reports, using the IMF’s old template, that in the month of July the balance in this one crucial category changed by $0.00. That’s right, not a single penny difference one month to the next.

I absolutely hate these kinds of things. It forces you into conspiracy theory territory. There is absolutely no way the balance could have stayed exactly the same. Impossible. Even if the central bank had refrained from any additional activity, which would be a low probability in its own right, the number still would have moved by a small amount in either direction; runoffs, early contract exits, rounding errors into the millions, etc.

But to be the same figure twice consecutively raises our suspicions. It may be a simple transposition or reporting error; whichever clerical worker typed in last month’s number for this month, or they accidentally copied the same thing over one column on the spreadsheet. I would hope one of these explanations is actually the case, otherwise Brazil’s in far worse shape than anyone currently imagines. 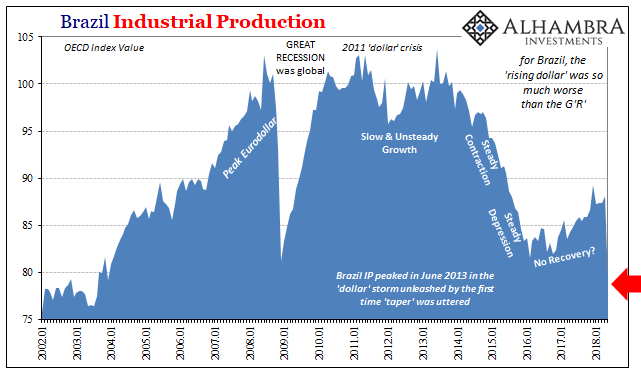 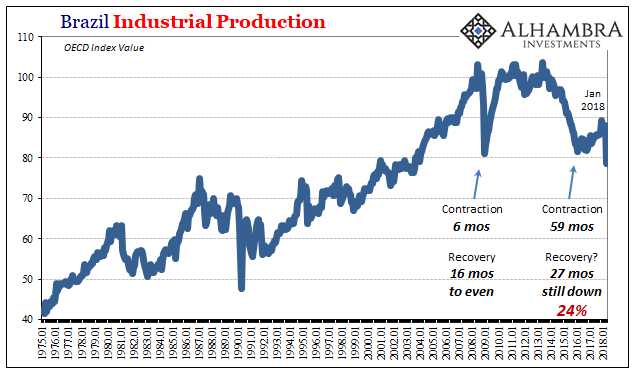 And people aren’t exactly high on it at the moment. Brazil’s economy having suffered a BRL, meaning eurodollar, relapse is itself retrenching. Industrial Production collapsed in May 2018 (the latest estimates), down 7.4% year-over-year, due to the truckers’ strike. But IP wasn’t exactly going anywhere in the months before, having stagnated for all this year up to the labor problems.

Retail sales and other economic accounts are decelerating, too. This after having severely contracted for years and then experiencing at most a barely nominal rebound. 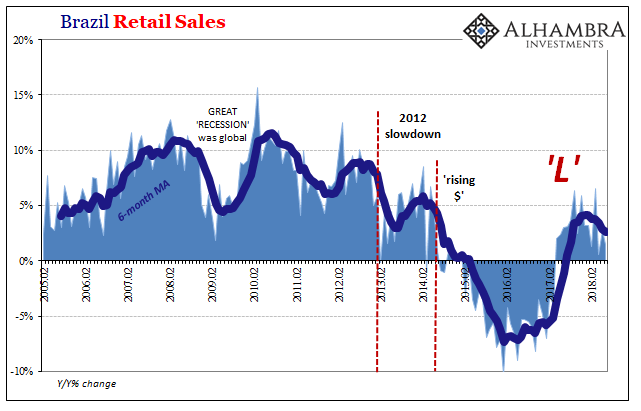 The first rule of central banking is to not make it worse. It sounds easy in theory, but in practice there are any number of ways to screw up what’s already getting bad. It is one big reason why the predominant central bank doctrine up until the nineties was the veil of secrecy. This is the huge downside to this era of transparency and openness.

We now see everything they do, even if what they do is to create serious doubt that they did nothing. Where does that lead? People might start to wonder, how bad might it be if authorities feel the need to fudge?

Again, I hope it nothing more than an honest mistake. I have no evidence whatsoever it isn’t anything other than that. Common sense, however, can’t help but to suspect official torment.

Welcome back to August. It’s times like these that remind us deflation is just deflation. 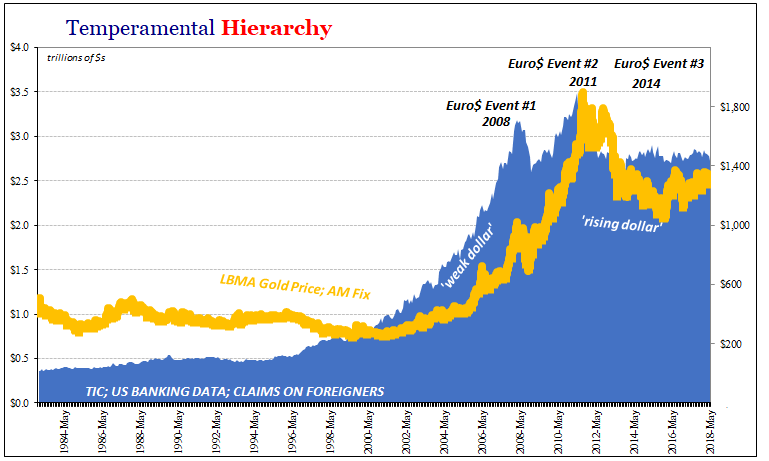 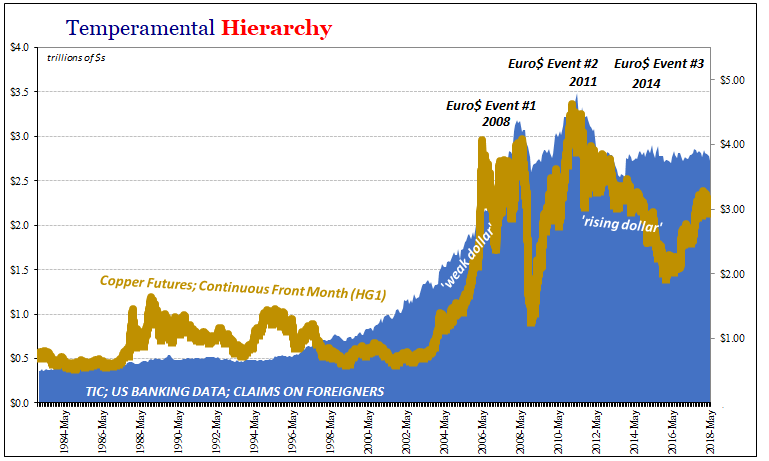 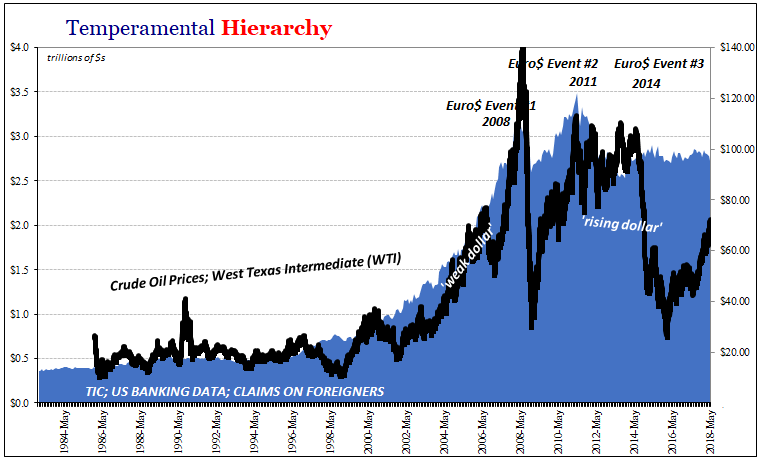 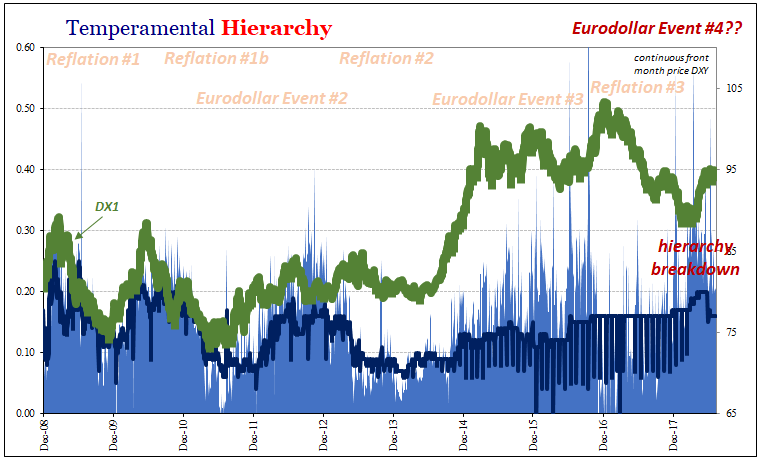