Americans are spending more on filling up. A lot more. According the Census Bureau, retail sales at gasoline stations had increased by nearly 20% year-over-year (unadjusted) in both May and June 2018. In the latest figures for July, released today, gasoline station sales were up by more than 21%. The last time they surged this much was September 2011, also the last time oil prices were having this big of an effect on consumer prices.

Overall, retail sales gained 6.41% year-over-year (unadjusted) last month. That followed an unusually large downward revision for June which cut more than half a percent off that month’s increase. Still, it was the third straight month around or better than 6%.

While that sounds terrific, and it is an unqualified improvement from the last downturn which ended in 2016, it is still more 2014 than 2004. The only factor that has changed is the price of gasoline. 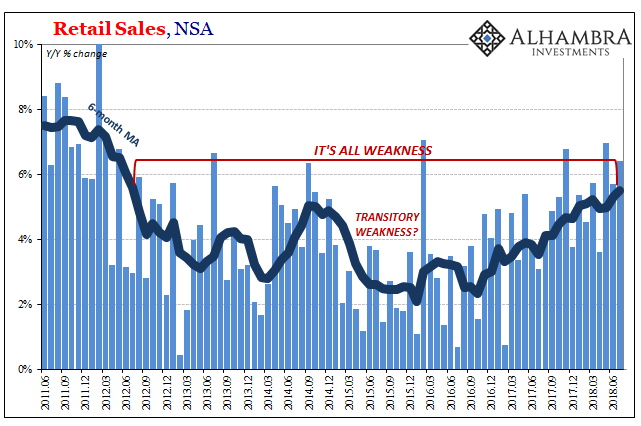 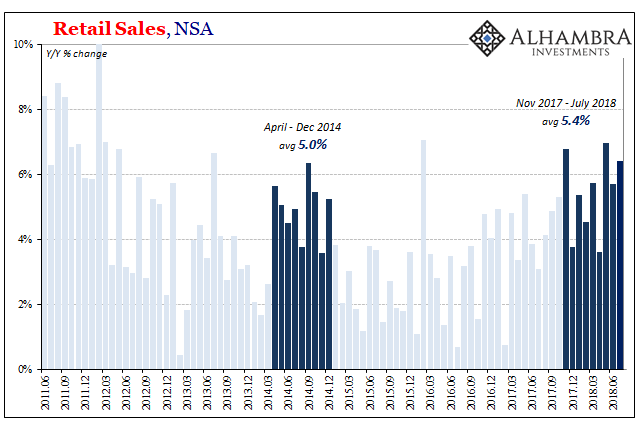 Subtracting sales receipts from those types of retail outlets, the US consumer is faring worse in 2018 than 2014. The difference isn’t enormous, but it is noticeable. 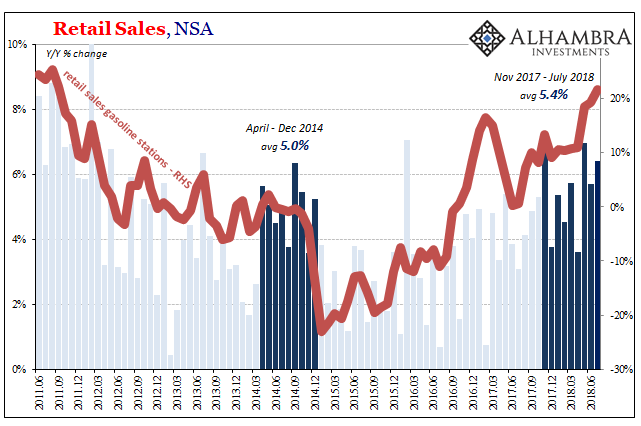 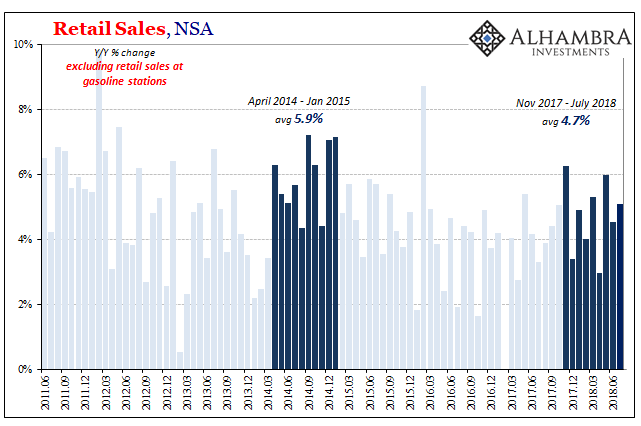 And it is very likely to have been noticed by consumers. It is the asymmetry of commodities. Overall, oil is still significantly less than it was in 2014, but Americans normalized to its lower price during 2015 and 2016. Though that was a downturn in the overall economy, especially the labor market, it would have been worse had oil prices been unaffected by the “rising dollar” (an impossible counterfactual).

The opposite, however, doesn’t follow. Now that oil prices have partially rebounded, it can still be the case that consumers feel its deleterious effects without having gained what the change in the oil price would have otherwise suggested. In other words, if the economy had actually accelerated with real momentum beyond the minor, typical upswing of the last lost decade, retail sales would be growing at upwards of 10% with sales at gasoline stations providing the last percent or two.

Instead, consumers get hit with relatively higher gas prices as compared to the downturn but without even the economy of 2014. It’s not as prominent of an “L” as compared to places like China or Brazil (or Italy), but it is one nonetheless. 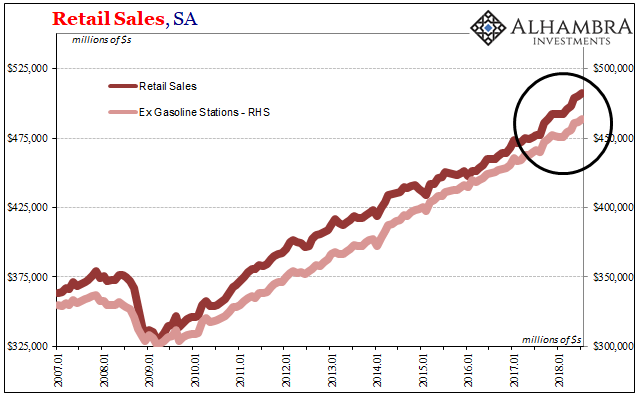 Beyond gasoline stations, the other significant reflection with regard to 2014 is obviously what’s behind all this in eurodollar terms. There is no economic fire breaking out at the moment despite the now billowing smoke emanating from the global monetary system. This shouldn’t be surprising.

Depending upon where you date the beginning of the “rising dollar” period, it took at least half a year (start date June 2014 when DXY began its ascent) if not quite a bit longer (say, January 2014 when CNY began to fall) for the deflationary pressures (smoke) in global money to become visible economic pressures (fire) in the US.

And even then, it wasn’t until later in 2015 that these became so unambiguous that the mainstream media was forced if temporarily from their last artificial “boom.” At that point, they were merely following the confused central bankers at the Federal Reserve who could but refer to nonspecific “overseas turmoil” for why they might be so optimistic in words but the opposite in action (only one rate hike until December 2016, when all prior estimates made in 2014 and early 2015 were thinking between eight and twelve). 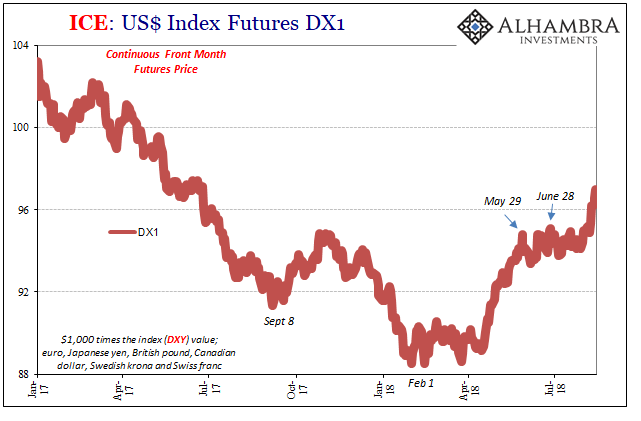 With King Dollar back in the fold starting sometime around the January liquidations, it could be that this US “boom” continues on for some time further still. I would expect that, also like 2014 and early 2015, it gets increasingly isolated (the false sense of “decoupling”) as other places more directly exposed to the eurodollar’s disruptive tendencies fall off first. A few appear to have done so already.

In terms of US retail sales, if oil prices continue their deflationary inflection alongside other commodities, then the gasoline effect (in prices as well as base effects) should abate to some significant degree; meaning that retail sales could soften more than might be considered for even this false “boom” in the months ahead. I suspect, however, that any further significant oil price declines will be declared as a huge boost to consumers just as it was last time around even though in the end it represents the opposite future inclination.

Repeating 2014 isn’t in any way like an actual boom because it would mean repeating 2015. In terms of smoke, that’s already happening. We might now just be waiting to feel the heat, and it’s not consumer spending.