In the continued absence of regular data, as the US federal government attempts to get back up to speed before the next lull, it is perhaps appropriate to continue on with this week’s parade of anecdotes. Here I’ll discuss three of them, each seemingly unrelated to the others.

To begin, we start with Chinese robots. It is the age of great economic uncertainty. Nobody really knows why, and in the absence of any explanation people will fill in the blanks with their imaginations. One nightmarish offshoot is as old as industrialization, that technology given sufficient attributes will steal all human labor.

The world’s economy has lost one decade and is well into a second. The Financial Times tells us that recent Chinese graduates are finding themselves in a job market condition all-too-familiar to America’s youth. All hail the machines (and M. Simmons):

“The banking sector was the one that hired the most people; now [the banks have] been hit by regulations [governing the finance sector] since last May, and they are automating more jobs,” said Cui Ernan, analyst at research firm Gavekal Dragonomics. “The impact on graduates has been big.”

Perhaps the problem isn’t regulations but something deeper and more fundamental still.

Our second anecdote for today is straight out of New York. Lawmakers in Albany are set to debate the state’s next budget and the Governor, Andrew Cuomo, is warning them this isn’t the time to be profligate.

Calling the situation “as serious as a heart attack,” the Democratic governor said revenues are $2.3 billion below projections for the fiscal year that ends March 31. That is on top of a $500 million revenue dip from personal income taxes that the Cuomo administration recently projected when it put together a budget plan last month.

This anticipated fiscal shortfall wasn’t anticipated until very recently. The economy was booming, and now perhaps not. Playing politics first, Cuomo blamed 2017’s tax reform which Democrats argue was written to punish high tax so-called blue states like New York. Many of those people subject to the comparative disadvantage may have pulled up stakes and relocated.

But why now? For that, the Governor suggested something more recent and closer to the heart of what’s left of the Empire State’s economy. “He added that the stock market drop in December may have had an impact, and also struck a blow to the bonuses given to Wall Street traders, which adds a considerable amount to the state’s annual tax collections.”

Do Wall Street banks really base their bonus structure on equity trading? Nope. That’s not how it works, though in the mainstream imagination Wall Street is synonymous with the NYSE and the 1980’s movie of the same name. The real power, and money, has always been the bond business – which is a hell of a lot more than fixed income.

That brings up our third anecdote, one which I’ve already touched on once today. Goldman Sachs has given up on its dream. The old days are dead. The “bank” is considering plans “to reduce the capital dedicated to its core trading business within the fixed-income group, a nod from the bank’s new chief that the business may not be as lucrative as in its glory days, according to people briefed on the matter.”

Goldman Sachs became a bank around the time Lehman Brothers, which wasn’t a bank, either, failed. There used to be a distinction, depository institutions completely different from commercial banks which were investment firms run in nearly the same manner as hedge funds. Throughout the eighties, nineties, and oughts, until 2007, the banking sector grew exponentially in ways that had little or nothing to do with banking as it is commonly understood. 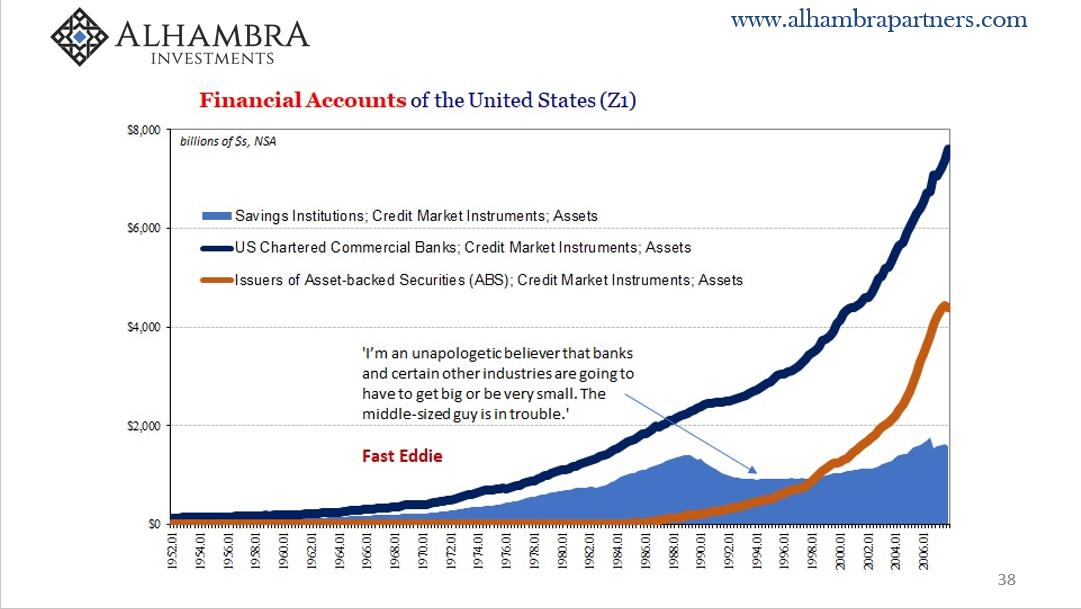 The commercial bank model had won the design contest, Glass Steagall merely a small hurdle in the competition. Once money was redefined starting in the late fifties and early sixties, the very nature of banking itself became up for grabs. It was no contest. Wholesale was so much more fun.

Quite perversely, people were briefly acquainted with shadow banking as Goldman (and Morgan Stanley) transformed itself, legally, into a depository bank. During the panic, the term was whispered and tossed around but never fully digested and explained in public. If it had been, shadow banking would’ve been just the start of a much deeper journey at some point arriving in shadow money – or what is really behind all this other unbank-like banking.

Investment banks became depository banks each attempting to escape the legacy of their shadow ways. Only, the global monetary system depended solely upon the commercial banking methods, all this FICC stuff that once made the big banks into global stars. If they don’t want to do it, there’s nobody left to pick up the slack.

The Federal Reserve wants you to believe it can and it has, but that’s just an illusion and as time passes more and more an implausible one.

In Goldman’s case, the reported rumors are that its commodity piece of FICC (the second “C”) has been singled out for ire and action. From the Wall Street Journal.

Goldman Sachs Group Inc. is planning to cut back its commodities-trading arm, once a huge moneymaker and training ground for a generation of executives including former chief Lloyd Blankfein.

The retreat follows a monthslong review under new Chief Executive David Solomon that showed the commodities business’s dwindling profits don’t justify its costs, according to people familiar with the matter.

This sort of medium doesn’t allow for much depth, particularly about complex topics such as shadow money and how dysfunction in the one becomes dysfunction in the economy. That leaves us to oversimplify. Still, what you see below, I will assure you, isn’t mere coincidence. 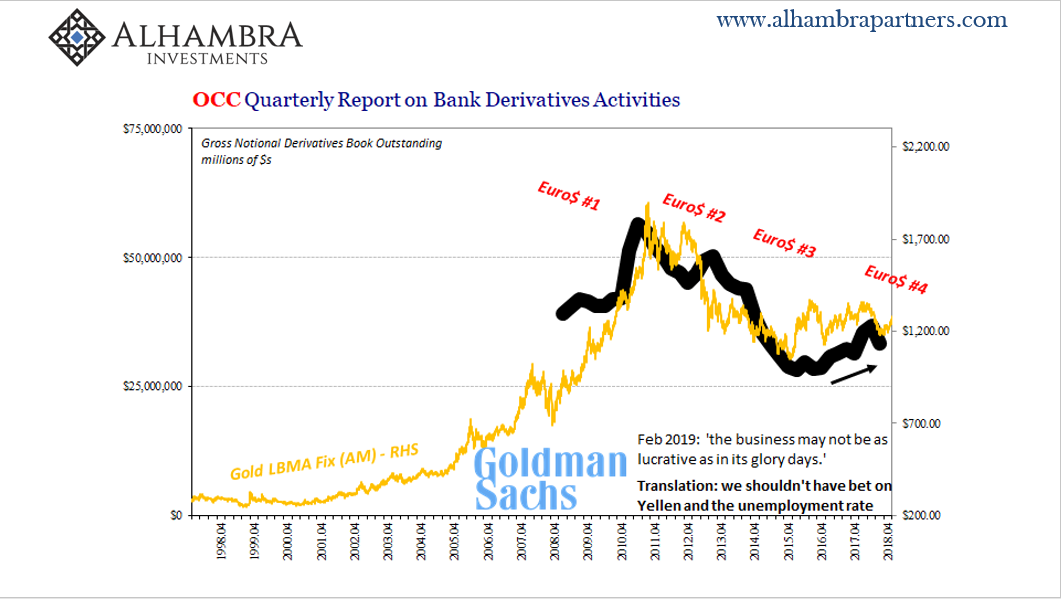 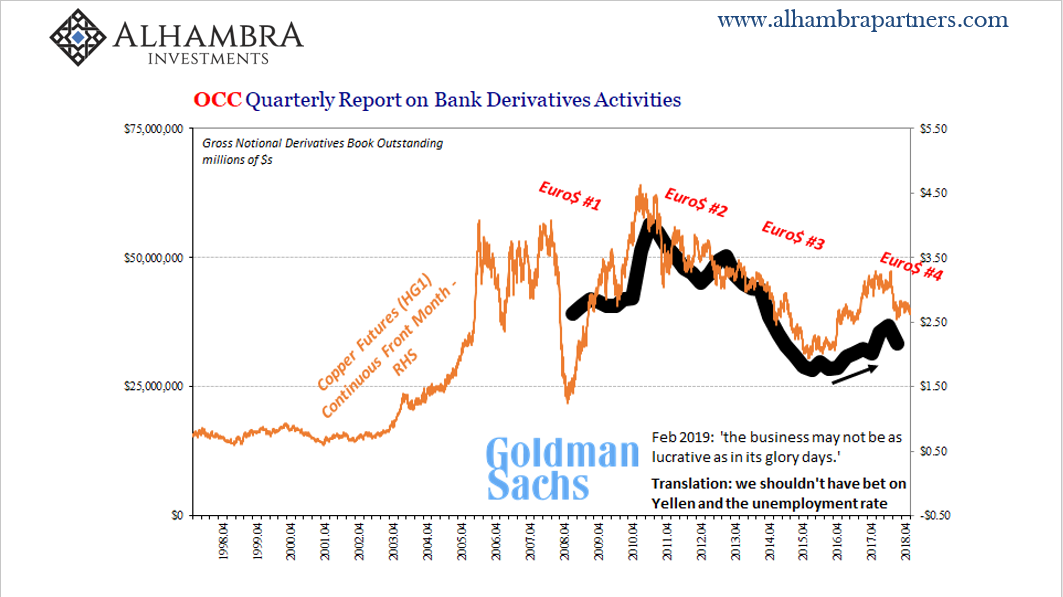 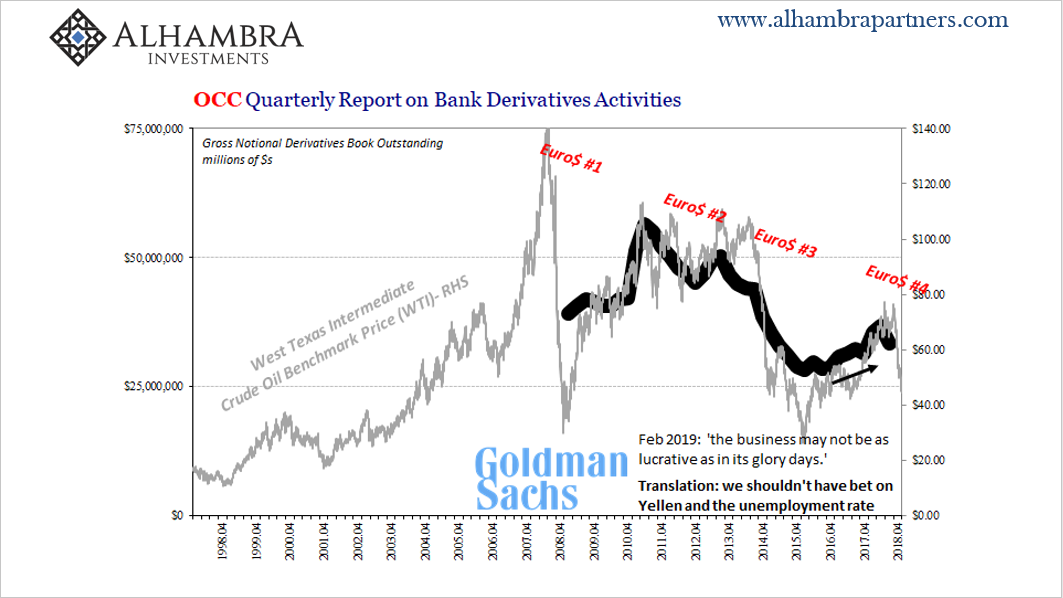 The reason the OCC only has data for Goldman’s derivative book Q1 2009 and forward is its legal conversion. As purely a commercial bank, its operations didn’t fall under the OCC’s purview. And while at least the OCC has caught up on call reports, the Federal Reserve never has on anything.

Once revealed, “somehow” the bank’s derivative book follows very closely the last decade’s trends in commodities, an important part of FICC. Or is that commodities have very closely followed Goldman’s willingness to engage in this monetary arena?

If the latter, what might that say about inflation versus deflation in 2019 with this upside-down bank already announcing the results of last year’s pain? It is just one anecdote, but by its own admission this particular Wall Street firm had dedicated a larger proportion of its scarce capacity to FICC money dealing. From that knowledge we can infer an outsized contribution to the overall monetary trajectory being captured by commodity prices.

The Fed attempted to fill in the monetary gap left behind by securities firms masquerading as banks post-crisis but it had no chance to succeed. Goldman actually did especially the last few years since Euro$ #3, what was Reflation #3, but now that #4 strikes it no longer wants to.

Chinese grads aren’t able to count on Chinese banks as a surefire source of hiring, just as Chinese banks can no longer count on RMB money with Euro$ #4 taking aim at China and its economy. New York State finds itself with a massive, recent budgetary hole certainly in some way related to Wall Street. On Wall Street, one of the street’s biggest “bank” supports of the last few years is going to be drastically scaling back, a process that was almost certainly begun in earnest months before today’s mere confirmation.

Likely around October 2018, with the effort picking up momentum by December.

Interesting anecdotes, and some real data consistent with them. They may not appear at first to be symptoms of the same problem, at least until you think about shadow banks, especially the shadow system behind them, and how they really work. Or don’t.

This is one key factor as to why our economic problems are so hard to overcome; how in the world the global economy can lose an entire decade and be one-tenth of the way into another. You start by saying the central bank isn’t central and already people are at best skeptical if not completely turned off. And then you tell them, the few who are left, if you really want any chance at legitimate economic recovery Goldman Sachs needs to make more money, a lot more, in its bond trading business. And if you don’t want Goldman to thrive in FICC, then the whole global monetary system must be completely revamped from the ground up.

Oh, and by the way, we’ve been operating under a clandestine global monetary system predicated on the world’s biggest banks who aren’t really banks working in the shadows for half a century already.

It’s way, way too much to grasp, especially all at once.

As true as all that actually is, the robot apocalypse sounds so much more plausible to your average person, Chinese as well as American. Even eleven years later, QE still plays better. Economics has been that big of a disaster. 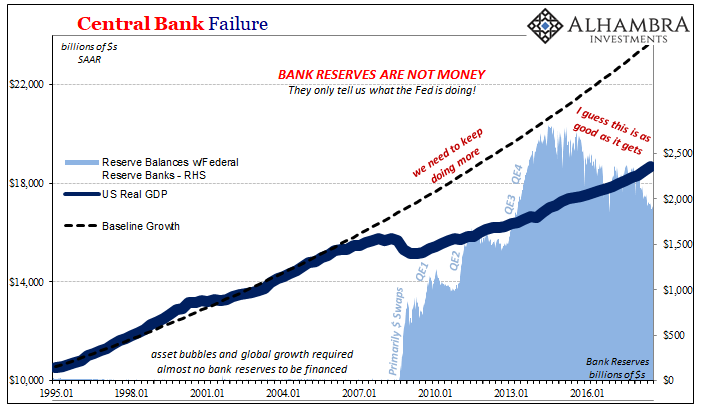 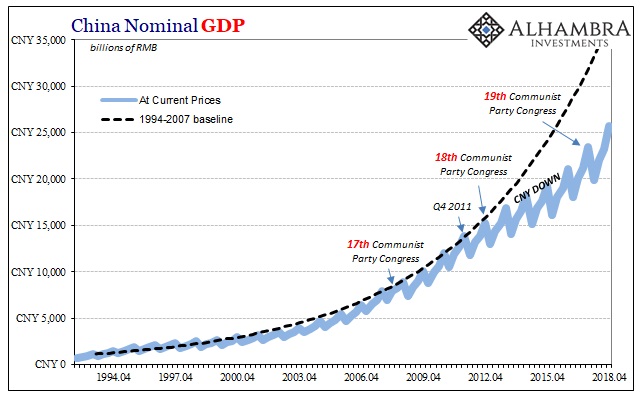