It is the shadows what really matter. A big enough problem in them would affect pretty much everything, including far off, out-of-the-way places like federal funds. Thus, if we observe weird things going on there we can infer more serious issues back where it does mean something.

In 2013 and 2014, the Federal Reserve was hugely optimistic. FOMC officials didn’t always come off that way in public. They are required by their positions to be outwardly reserved, so as Ben Bernanke and Janet Yellen began tapering QE’s 3 and 4 they more quietly started to think ahead. To them, the US economy looked poised for full recovery. It had taken a long time, a lot longer than any of them thought, but in 2014 especially here was their chance.

As such, authorities had to contemplate what the world would look like back at normal. In many ways, it could never be the same again. Basic things like federal funds would never reclaim their former place.

There was a debate at the time about what to do. Not much of it was made public, a few references here and there over how to operate an exit. What was decided, essentially, was to keep federal funds as the primary monetary policy focus. The reason? You.

Monetary policy contains no money, it runs entirely on expectations. Therefore, according to this view, what ultimately matters is how you perceive monetary policy. Officials worried that if they switched to something like the repo rate people, as many were counseling, it would be confusing to you since you’ve been taught since Econ 101 about federal funds and its target. This uncertainty could hinder how Economists think central banks work.

So, the FOMC decided that for the public they would still use federal funds to signal to you their intentions. All the while, the dirty business of actual monetary policy would be left to other facilities, things from the official perspective you needn’t worry about. From the July 2014 FOMC meeting minutes:

Understand that this is already very different. Before 2008, the Fed targeted a specific federal funds rate. That’s all they did! The Committee set a number and, voila, the federal funds rate obeyed because you don’t fight the Fed.

Following that date, federal funds began to misbehave, as if money market participants were ignoring the target entirely (they were because they had much bigger things to worry about). The FOMC has therefore created a corridor through which you are not supposed to think about anything other than federal funds inside of it. That corridor is the proper signal – so long as the rate itself remains compliant with it.

To most people this is all arcane mechanics of an esoteric system that doesn’t easily lend itself to casual observation and interpretation. Regardless, this is vitally important and it is exactly that ignorance that the FOMC’s continued emphasis on the federal funds rate depends. As long as the public feels the Fed retains “enough” control with an irrelevant liquidity measure, policymakers don’t think it much matters about real liquidity. That ridiculous theory may change with time, though not likely in the manner in which they are planning.

Four years later, here we are. You probably didn’t notice but at the end of last week federal funds (effective, or EFF) crept higher yet again. It had already broken above IOER in late March. At the end of Q1 2019, it was 2.43% despite IOER being stable at 2.40%. 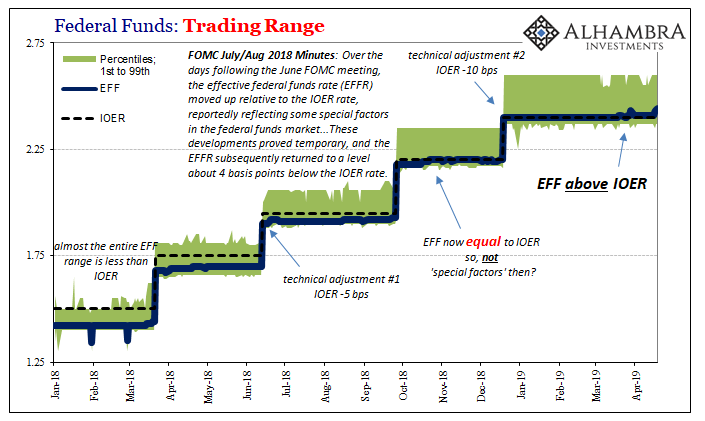 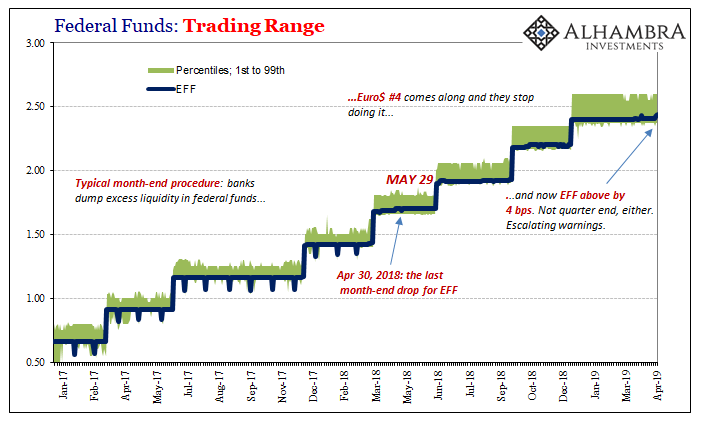 It’s as I said in March 2015. “Policymakers don’t think it much matters about real liquidity” until they are made to confront a very different set of circumstances. It is the third cycle-within-a-cycle that I pointed out a few weeks back.

Only, as noted yesterday, we are starting to see the first signs of a third oscillation in the same sorts of place; those like the otherwise irrelevant federal funds market where the effective federal funds rate (EFF) jumped to as much as 3 bps above IOER last week at the end of Q1.

And now 4 bps above even though there is no reason to expect the Easter holiday would restrict liquidity to this level. It isn’t the holiday, it is Euro$ #4 still ravaging through the shadows. The Fed “pause” and global dovishness haven’t made a difference because why would they? Shadow money problems are breaking out into the open of federal funds to the point it’s really starting to show.

Federal funds is a communications policy, alright, only what is being communicated isn’t likely to get Jay Powell as excited as Janet Yellen and Ben Bernanke once (briefly) were. There is no money in monetary policy. But effective money still matters, a lot more than mere official communication. 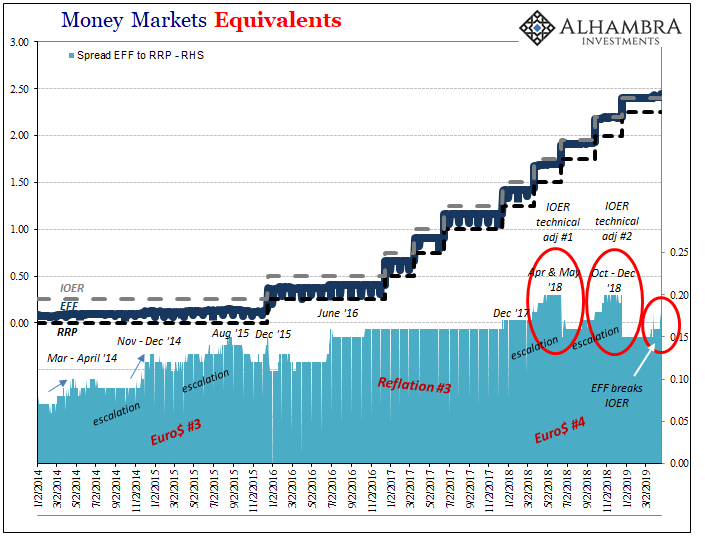