Vital Lessons Still Not Learned: Be Careful About GFC2

Vital Lessons Still Not Learned: Be Careful About GFC2

It’s one of those crisis-level-of-illiquidity things that if you heard about it in normal times it would make you shake your head in disbelief. During a full-blown meltdown maybe it’s not standard stuff, but given the chaotic conditions it doesn’t seem so preposterous, either. Negative convexity is an otherwise benign phenomenon in fixed income that when combined with a lack of liquidity can rip your throat out in a heartbeat.

The reason it kills is how it can act like proverbial quicksand; you don’t realize you are in big trouble until it’s too late, and by then you’re neck deep in a position you’ve no hope to escape except by taking huge fire sale losses you’d be lucky to survive.

The most famous example of this, and it’s not really well-known, was Morgan Stanley in the late months of 2007. Unlike many of its peers, prop traders at this dealer “bank” were betting big on subprime-induced chaos; they were by their own admission short the “toxic waste” with an $8 billion position at what would have been seemingly the perfect moment for it.

Obviously, there was more to it as then-CFO Colm Kelleher explained way back in early November 2007 when things had yet to spin so far out of control:

We began with a short position in the subprime asset class, which went right through to the first quarter; as the structure of this book had big negative convexity and the markets continued to decline, our risk exposure swung from short to flat to long.

How the hell does that happen, you ask? Gamma. Illiquidity-induced gamma.

No one really knows specifically what was going on inside what ended up becoming a multi-billion dollar loss for MS, but in 2013 I pieced together what I still believe is a reasonable guess:

In Morgan Stanley’s trade, the short position was likely paired with a long hedge position in super seniors of greater size (the estimates were for $10 billion). Where negative convexity plays a role is in its impact across tranches. While prices of the less-senior tranches were declining due to default fears and cash flow deterioration, the price of the super senior would exhibit very low volatility – until implied correlations hit that magical point where the correlation smile produces larger price volatility. That makes this trade seem like a perfect expression of a bearish outlook; make money on the middle tranche losing value while the super senior adds a hedge protection.

The problem was in their modeling of not only implied correlation and negative convexity, but the degree of reliance on derivative measures of financial parameters. As illiquidity was impacting credit spreads and Gaussian copula-based models were interpreting such moves as rising correlation, the negative convexity feedback loop was a blind spot since Morgan Stanley likely never modeled “irrational” fear driving illiquidity as an input. As implied correlation levels rose, the super senior began to take on the characteristics of a “long” trade in subprime, a truly bad place to be in the latter half of 2007.

You can probably imagine what an experience like this would have done to Morgan Stanley’s other systemically crucial money dealing activities at a very crucial point in global monetary, financial, and economic history. Calling it risk aversion doesn’t do the paradigm shift near enough justice.

Why bring this up in March 2020, other than the potential for GFC-style clickbait? Speaking with my colleague Joe Calhoun, both of us thinking out loud so that we could brainstorm in order to better think ahead, there was that anomaly in JPY just before All Hell Broke Loose. 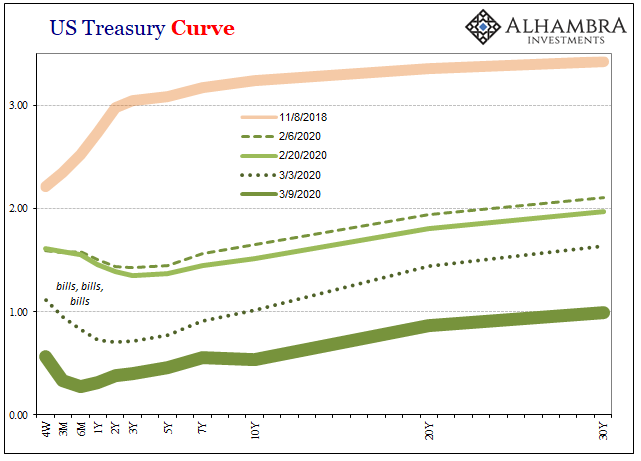 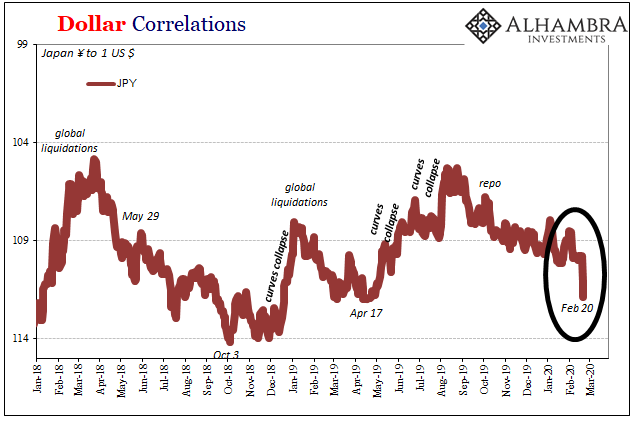 February 20, you’ll recall, was a key turning point in, well, everything. More and more, to me, that looks like GFC2’s August 9 – the moment past which there would be no escape. That’s when the growing downdraft had transformed into the unstoppable runaway illiquidity freight train.

Just before that trigger, however, there had been a sharp and as-yet unexplained drop in JPY. Someone (or a few) betting big on central bankers fixing everything, or being involuntarily sucked in just before the wheels fall off?

Normally, it’s a bad sign when the yen rises – as it would, acutely, from February 20 into the teeth of the global crisis, reaching its zenith on March 9 (the oil crash). From that day, through most of the liquidation wave, JPY was back to falling again.

Violent swings back and forth.

These moves were only somewhat unusual, and to me they bear the scars of negative convexity in a gamma blowout. Exactly what trade(s) or which firm(s), I don’t know. It had all the telltale signs of a similar setup; think 2012’s London Whale. Someone – several someones in Tokyo? – got sucked into something just as the negative global wave was beginning to crest.

A whole lot like Morgan Stanley in mid-Autumn 2007. You think you’ve got the trade(s) zeroed in and before you know it you’re on the wrong side of the market(s) and it becomes liquidation-city from there on. Losses that pile up and send ripples throughout the system. Dealers don’t just remove themselves to the sidelines, they run for any exit leaving the whole system high and dangerously dry.

And if your last liquidity hope was Ben Bernanke, or is now Jay Powell, say a prayer because Heaven can only help you. 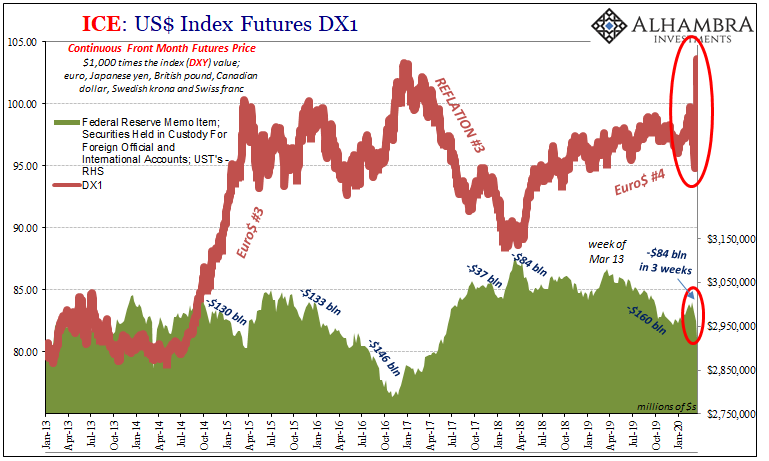 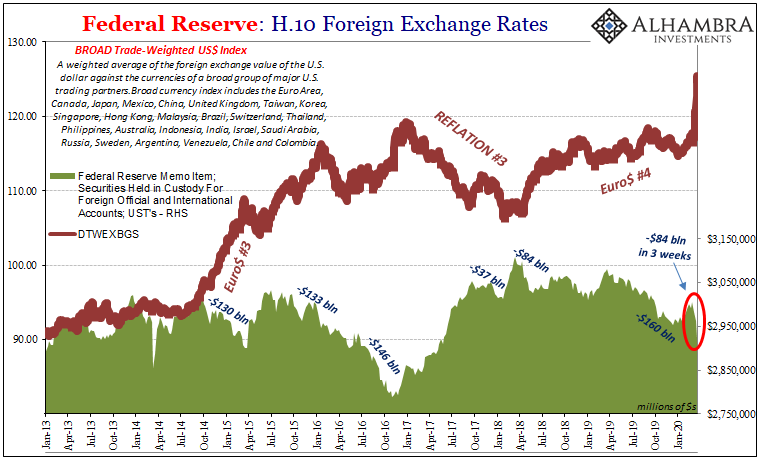 To be clear: I don’t know if that’s what happened in JPY or anywhere else but the circumstantial evidence points my interest in that direction.

And it’s more than interesting because it seems like the same setup might be repeating. As I wrote above, JPY was moving down not up in the thick of this global mess. But now, over the last two plus days, the yen is up sharply once again.

There’s still massive volatility and gamma (as you can plainly see above) on screens everywhere, the actual quarter-end coming up early next week (another less-famous calendar chokepoint), and a shortage of collateral so severe not only are repo fails way up none of the primary dealers want anything to do with the Fed’s “repo” operations (which, according to some of the same repo “experts”, somehow laughably means, once again, there’s “too many” Treasuries). 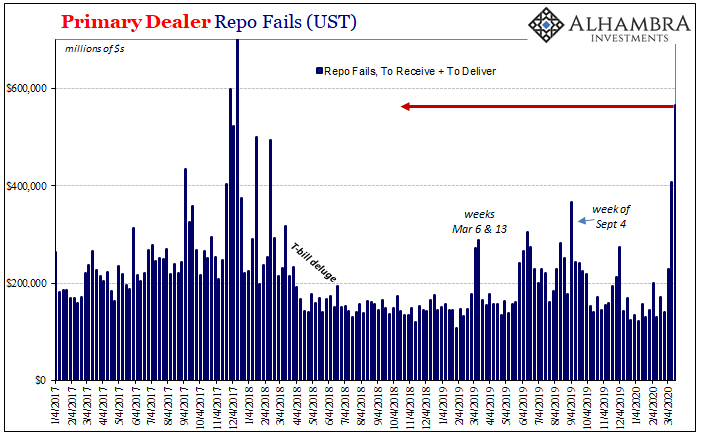 As the lagging data starts to flow in, repo fails one of them being a week in arrears, it paints a pretty stark picture behind the dollar’s recent wrecking ball of a spike; perfectly illustrating how this is, and continues to be, a crisis level global dollar shortage. First LIBOR and now collateral both demonstrating how Jay Powell and his stupid overseas dollar swaps (which, as I’ve pointed out repeatedly, have been open and operational the entire time) just don’t factor.

A global dollar problem that the world isn’t equipped to handle even though we danced to much the same tune once before. Nothing, absolutely nothing was learned from the first time. Subprime mortgages didn’t crater Morgan Stanley’s 2007 earnings, but the low level of liquidity sure did.

And it only got worse from there. Ben Bernanke was never anything more than a sideshow clown. Today, Jay Powell’s looking at himself in the mirror and wondering if the ‘ol clown nose is on straight.

TL/DR: Be careful, I don’t believe GFC2 is anywhere close to being done. 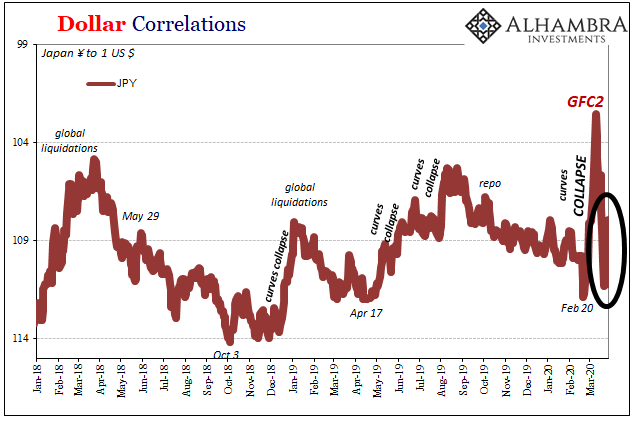