Little noticed at the time, October 2012 was quite the roller coaster. Most anyone cared about was QE3, the wonderful, awesome flood of liquidity kindly wise-man Chairman Bernanke had restarted for reasons that didn’t seem so important. Did it matter to the public that the repo market went haywire late in that very same month, at the very same time QE3 was in full swing?

Of course not. Repo? What repo?

There had been prior “floods” leading up to all this, too. In the summer of 2011, an “unexpected” global banking crisis erupted catching (as always) central banks off-guard; particular the one in Europe and its counterpart here in the US. While convention said this was a “euro” problem, as in European money, it actually was the second global dollar shortage, eurodollars, plaguing European banks providing and redistributing those dollars the most.

It doesn’t sound so remarkable today, given the whole repo thing last year, but the issue of bailing that particular market out had been first raised all the way back in early August 2011. How to stem the growing crisis? The Fed opted not to intervene in repo in order to (try to) play it cool for the public; instead, Operation Twist was pulled from the toolkit and dusted off.

Doomed to failure by its own stupidity, by November 2011 the Fed had to come up with something else. But what? Not wanting to pitch a third QE so soon after the second and with Twist still fresh, they rejiggered the dollar swap lines and began to coordinate better with the ECB which was just about to unleash its own “flood” in the form of (useless) LTRO’s (denominated in euros). 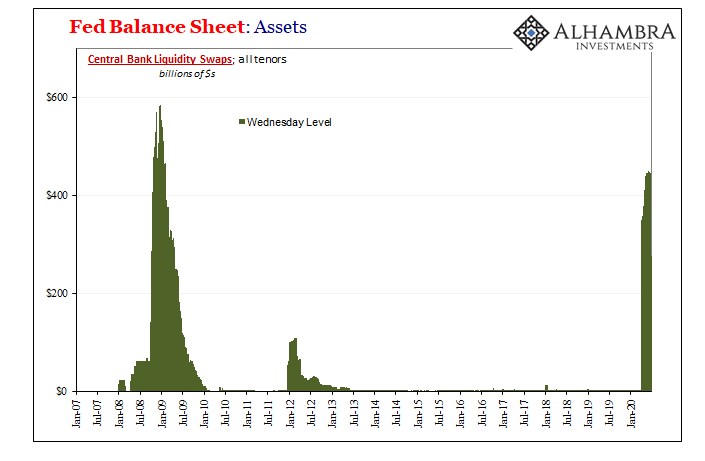 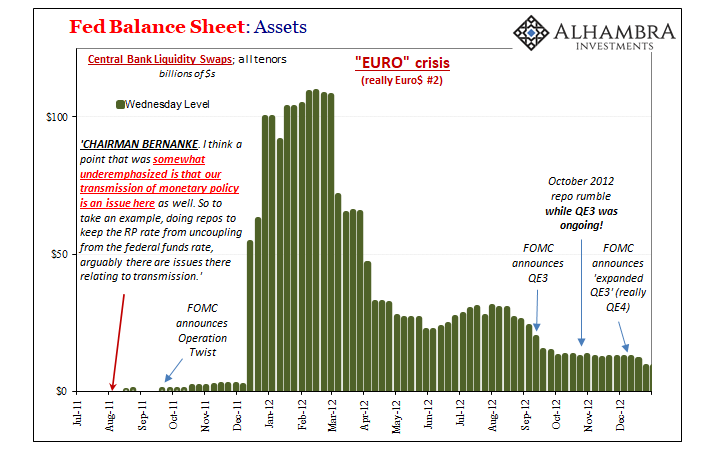 While usage of them never got nearly as high as it had during late 2008, it was still a substantial signal especially given how close it followed that first dollar outbreak. This was supposed to have been a recovery, after all, instead three years into the thing and only the same damn problems in money and banking.

Dazzled by the puppet show, no one bothered to ask, are these “floods” really floods?

It was left instead for the real economy globally to answer with an emphatic, NO! Europe, bearing the brunt of what was really Euro$ #2, fell into a re-recession early in 2012 while the US flirted very closely with one itself.

Throughout that year, though, dollar swap levels had declined substantially. If you went solely by the trend in them, you’d have thought everything was normalizing and getting back on the right track. And you’d have been wrong; like Bernanke. 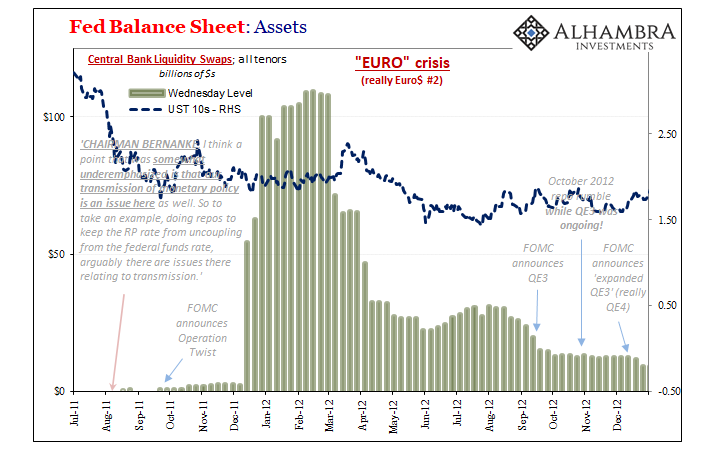 These things are neither technically useful nor very helpful in understanding the global dollar situation – except in the one case when they are being leaned on most heavily. And all that says is central bankers have finally realized something big is wrong; in every instance only after ignoring and dismissing the always-plentiful warning signs therefore confusing mostly themselves and the public.

While they are celebrated far and wide in the media (and the stock market) as a “flood” of “liquidity”, hugely inflationary and powerful, they are anything but. Bonds were, and remain, unimpressed to the point of (correctly) betting the other way (above). Deflationary yields for a whole lot of inflationary talk.

Last week for the second week in a row the Federal Reserve reports a smaller balance in its central bank liquidity swap assets. Primarily in Europe, its counterpart authorities appear to be growing more confident about the stability of the global situation right now. What markets think about all this is instead very 2012-ish. 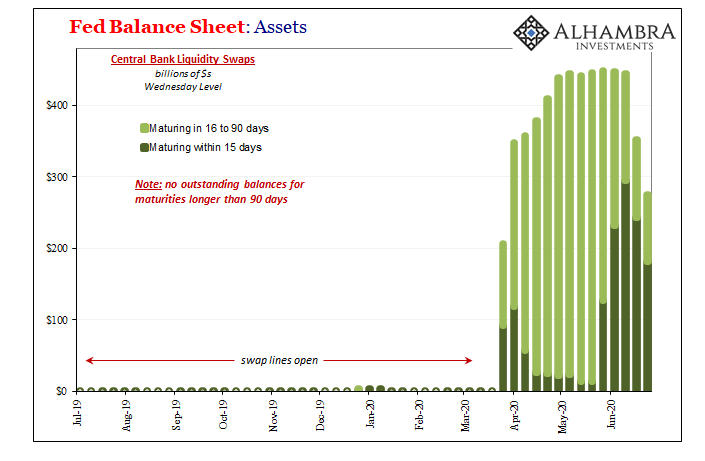 Let’s start with the repo market, on its vastly more important collateral side. Following an absolute flood (a real one) of T-bill issuance, repo fails had calmed down by late last month. That would suggest not only supply but also some minimal level of redistribution via the various shadow (securities lending) means.

Then something happened late in May in UST futures followed by an end to the mainstream love affair with the 5s30s. By the middle weeks of June, suddenly repo fails are an issue again: 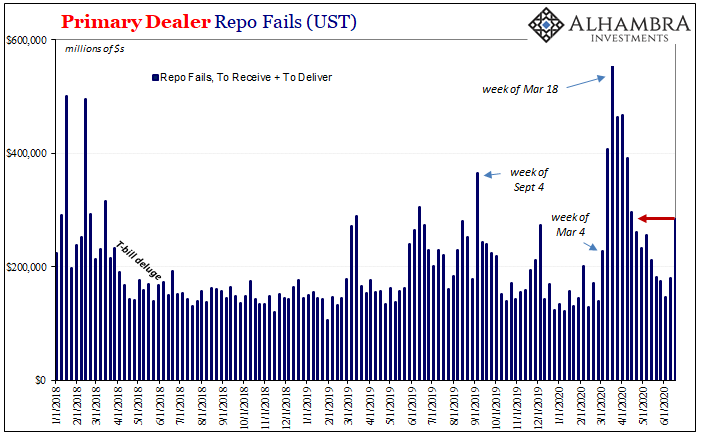 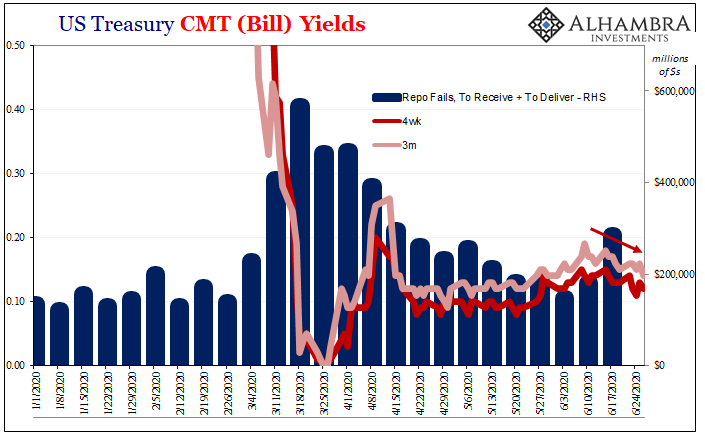 As a result, not only are longer-dated Treasuries rallying so is the short end stuff, too. Especially the bills; which even the idiots realize is an important part of the big dollar therefore economic picture – they just don’t know where and how it actually fits (even though it’s their damn job, and despite now two GFC’s they continue to refuse to do it; gross dereliction and corruption of the most contemptible kinds).

March was, as I wrote, perhaps the most perfect and elegant elucidation of the ultimately destructive collateral bottleneck imaginable. Bills are the best of the best and therefore a crucial indication. So, what we have right here is a situation of bills plus fails versus falling swap balances.

But it’s not just bills plus fails, though, is it? As noted yesterday, the eurodollar curve is weirdly inverted, too. And the yield curve, especially how the 5s30s are right back into the I-hate-you mainstream category.

The sole use for dollar swaps is, again, only when they rise and remain high because that tells us even central bankers get that there is a huge disruption. When they fall, it could mean things are getting better but, like 2009 as well as 2012, don’t ever trust central banks or dollar swaps alone to make that determination.