The Federal Reserve is the current contender for taking the crown from the Japanese. Central bankers, in particular, are like hoarders; they never throw any policy idea away. It doesn’t matter how many times it fails, or how spectacularly. Japanese policymakers have stuck with QE for now double-digit attempts without anything to show for it.

Instead, whichever thing gets rebranded. It’s easy just to give it a different name and treat the public like morons: in 2013 an additional Q was appended to make it QQE, and then in 2016 three more letters were included, YCC, to add to it even more condescending disrespect. Or, as the Japanese have exemplified best, they change up some of its inconsequential details: buying ETF’s rather than JGB’s, as if activity in a different asset class will make a lick of difference from any act of buying.

The Fed over the last year has given Japan a run for its non-monetary money. There was last fall’s not-QE, a clever way of remarketing in true New York style. Then in 2020 all sorts of new assets being targeted for purchase, even though the end result of any and all purchase programs is still just bank reserves (as well as, more importantly to policymakers, glowing press reports on both purchases and the bank reserves they lead to).

There is now, apparently, a third entrant in the increasingly crowded field for insanity supremacy. Admitting failure is not something any global official entity appears capable, so, as you should expect, there had to be a Communist entry into the race.

China’s economy slowed – “unexpectedly” – as Euro$ #2 erased any last potential for legitimate global recovery in the wake of the first global financial crisis (dollar shortage). Chinese fortunes were particularly susceptible since the system had been raised from its backward, simplistic agrarian basis through several decades of globalization almost exclusively (financed entirely by a favorable eurodollar system; or, as Western Economists struggled to explain it, “good luck”).

Not only had this vulnerability played the decisive role in Euro$ #3 singling out China and the rest of the EM’s for their monetary beatings, as usual confused policymakers (to which the West yields no monopoly) vowed to do something about it. What they came up with was called “rebalancing.”

No biggie, the Communists declared China would grow itself and in doing so getting the Western media to uncritically swallow the word. Instead of producing the world’s goods – because the world wasn’t demanding more goods from anyone – the Chinese would develop their own internal markets for modern services and the like. 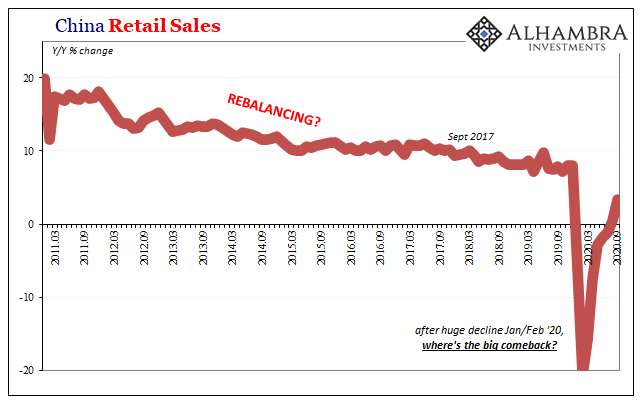 It fared as well as any one of the QE types and varieties.

In less than two weeks from today, in one of those Communist rituals, the country’s increasingly authoritarian government will hold its Fifth Plenum under the 19th Party Congress. You might remember the 19th for its declaration totally reprioritizing China’s commitment to “quality” growth rather than “quantity”; a message which totally, correctly undercut every notion of globally synchronized growth being a legitimate condition.

The Fifth Plenum will ceremonially adopt China’s 14th Five-year plan (yeah, they’re still doing this as if following any Soviet example wasn’t enough pain). Most of the details have already been hammered out, and even though we won’t be privy to them until probably next spring, rumor has it (because Emperor Xi wants us to have it) it will include something called “dual circulation.”

Not just include, either, perhaps its centerpiece.

It’s the strategy whereby China’s economy will seek economic fortunes in the usual way only if there is some external demand for what China can produce like it always has. That’s external circulation. More so, the Chinese intend to develop their own internal markets for modern services and the like. Internal circulation.

Wait. Hold up. How is that different from “rebalancing”, you ask? It has a different name, obviously.

So, the Chinese are itching to join the Bank of Japan and Federal Reserve to see which one can do the same thing over and over and over without the pubic noticing or once being called on it by anyone in the media or with some standing to criticize (obviously, a much trickier proposition in China these days – especially for members of its opposition, internal police, and judiciary).

Like “rebalancing”, “dual circulation” buries the lede. Just like 2013 and thereabouts when the former was formally adopted as policy gospel, what did it truly say about global growth as a whole that China was basically admitting if it was to get by it would have to go along more along without, you know, global growth. Ben Bernanke was talking about recovery when China was absolutely preparing for its absence.

And just like the aftermath of the 19th Party Congress, Xi Jinping is basically telegraphing his position to anyone not mesmerized by whichever latest remarketed QE brand. The Chinese can’t be very optimistic about global growth right now, or for the foreseeable future otherwise they’d plan very different for the next five years beginning 2021, don’t you think?

Some of that is surely political; geopolitical tensions, trade wars, whatever you want to call it. As it is relatedly economic (small “e”); after the COVID fiasco and its aftermath, companies all over the world are rethinking supply chains. That won’t be good for China.

There’s also backlash over China’s Belt and Road Initiative given that it has become very nearly naked extortion. Not for nothing, BRI showed up as the external twin to “rebalancing” given the world’s flagging fortunes more than half a decade ago.

Is BRI next to be promoted using a new name and abbreviation? 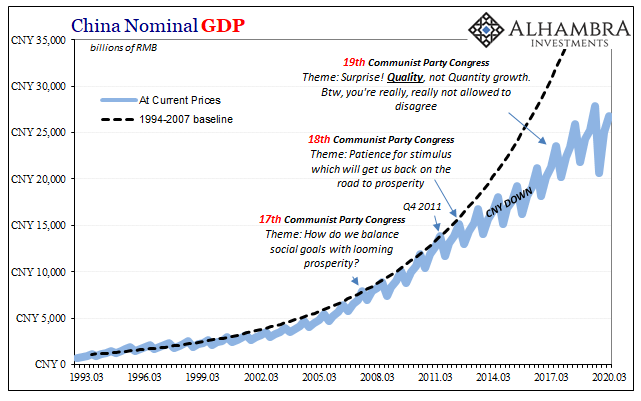 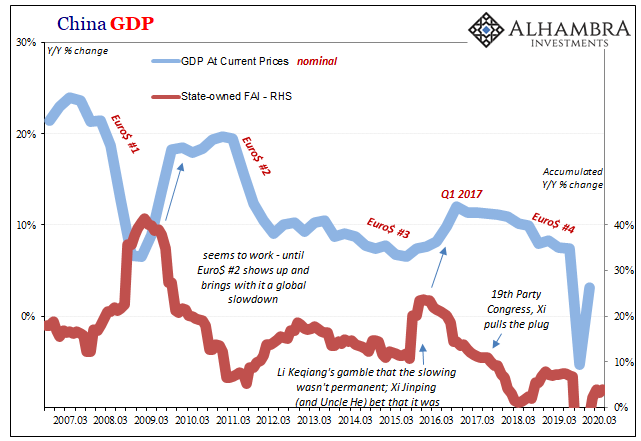 Things are not going well. China’s third quarter is our the fourth; their big contraction due to the overreaction to the virus happened three months earlier during 2020’s first. The West got hit in the second. Therefore, China’s second quarter rebound approximated what we’ve seen everywhere else in our third.

But if China’s third quarter is anything like what we’re going to get in the all-important fourth, no wonder “dual circulation” should be featured prominently from it moving forward. In this sense, there is an unintentional equality to it; “dual” given the implied limited room for improved circulation both inside and out.

As everywhere, the Chinese economy is still rebounding. However, an upturn while necessary is nowhere near sufficient by itself for recovery. The Chinese numbers, as well as these rumors, bear this out. GDP growth slowed to just +2.7% (q/q) during Q3 compared to +11.5% in Q2. Year-over-year, the rate was just +4.9% (versus +3.2% the quarter before).

We keep having to ask, where’s the unambiguous recovery? 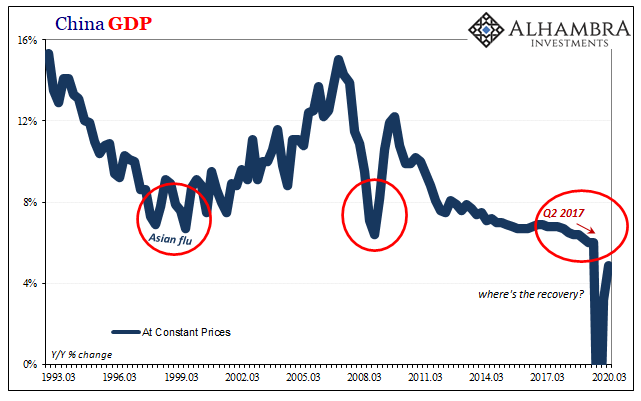 When real GDP in China slowed to 6% (y/y) during 2019’s final three months, it was the slowest in that country’s modern history and put another yet even bigger exclamation on Xi’s tightening grip as well as what his policy had become under the 19th Congress. Six percent was a new definition of low, a corroborated reflection of inside as well as outside economic inopportunity.

So, how can less than five percent qualify as anything other than alarming especially on an upswing from such a huge contraction two quarters ago? Six months on this improvement, and this is it? In China?

And thus, the new “V” narrative has become more completely formed. It started out in those optimistic early days of the rebound as simple as could be: “they” turned everything off, so watch how easy it will be to turn the world economy right back on. As if nothing had happened by summer.

That didn’t happen. So now, the more obvious it becomes how it wasn’t easy, after all, thus will it have to mean more “stimulus” – China most of all.

Hooray? It sure doesn’t look like there’s a wave of “stimulus” going on. 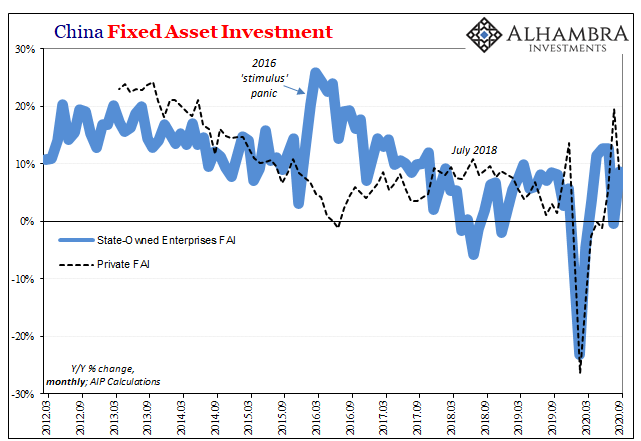 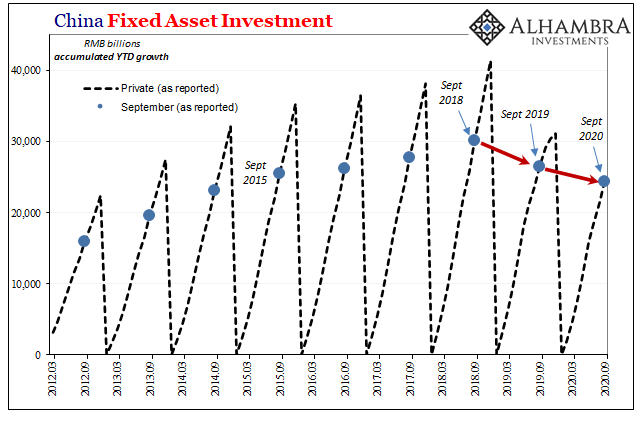 If there’s one other thing Western observers have missed in their own self-imposed blindness about China, it’s what the word “quality” growth – in the 19th Congress sense – means internally. Externally, it means don’t count on a global surge.

Internally, it has already meant don’t look for huge “stimulus.” Xi (and his minions like Uncle He) has been perfectly clear about this, especially how 2009 and 2012 massive “stimulus” achieved nothing positive instead leaving China with an even bigger mess to go along with an even greater financial challenge to overcome on increasingly limited external prospects.

The Chinese they don’t grow any trees in the air like they used to.

Despite China’s struggles in 2020, there hasn’t been much fiscal (nor monetary) programs to do much about them. Curious, no?

In that sense, dual circulation is maybe better categorized as the Fed classifies QE: highly uncertain. In other words, none of this stuff has worked anywhere, but maybe, just maybe, for reasons no one can identify, or for reasons that Economists used to just chalk up as good luck, perhaps it will work this time. 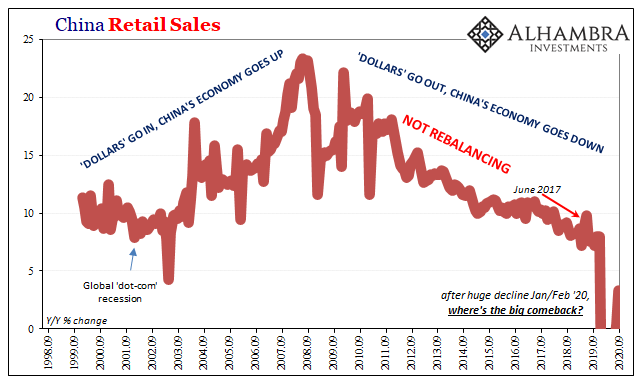 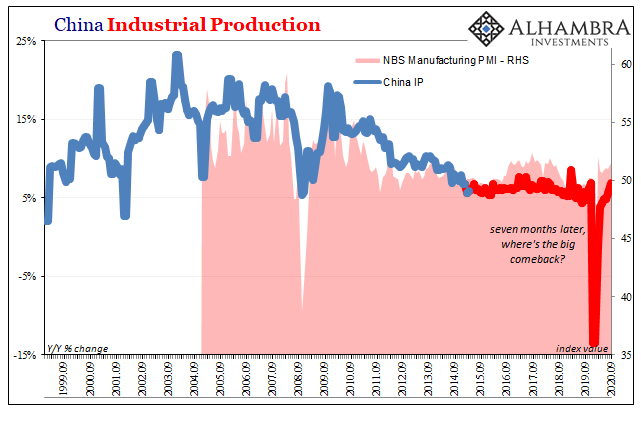 Then again, as we know only too well, it was never good luck in the past. It was always just eurodollar growth. What led to rebalancing and now dual circulation in China wasn’t the world’s luck running out. Quite simply, the eurodollars had run out.

That’s doesn’t seem to be changing anytime soon, no matter what inflationary nonsense by Jay Powell. And it doesn’t seem like Emperor Xi is willing to bet on it, either.