Following up on the whole subsidy issue, GDP versus GDI though here with a determined eye on the Net Operating Surplus (NOS). The way this stuff is accounted for in the government’s (BEA) scheme makes it very confusing; the subsidies are subtracted from indirect taxes, therefore they reduce GDI.

It’s not done on purpose, as if they are trying to hide something or cover anything up. On the contrary, there is actually a bit of elegance to this. The BEA is being rather helpful in this regard.

You have to keep in mind that the real business of government stipends has already shown up elsewhere. Double counting. So, the amount of overall subsidies subtracted from the tax line on GDI is an indicator of how much artificial payments have been buried in those other places – primarily NOS. 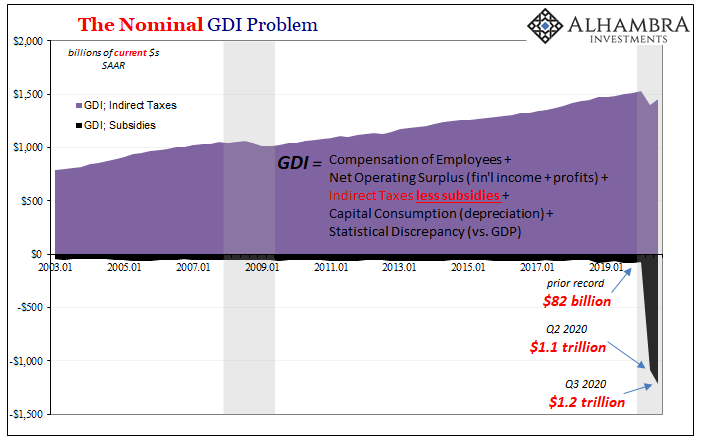 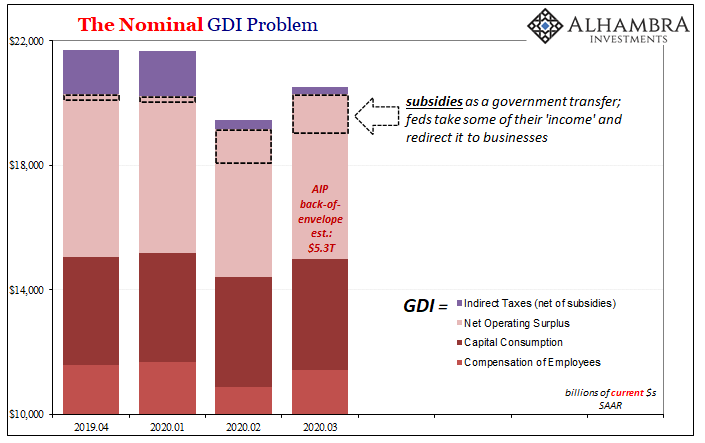 Let’s put some numbers to it: for Q3, the BEA reported gross indirect taxes of $1.46 trillion (annual rate). That’s the raw amount of government income received which pays for (only part of) the government’s spending (which gets recorded in GDP).

However, there was also the ungodly $1.21 trillion (also annual rate) in subsidies paid out by the same government largely in the form of these loans-that-everyone-knows-will-become-grants. Thus, that $1.21 trillion is already in GDI, largely NOS.

Subtracting the $1.21 trillion paid out from the $1.46 trillion of indirect taxes received leaves the BEA with just $247 billion to be included. What that really means is that the federal government first purposefully redirected $1.21 trillion of its own “income” into the private economy by taking that much out of its own pocket (shown above), leaving for itself just $247 billion of net GDI-accounted surplus which can’t even coming close to paying for all its massive expenses.

As illustrated yesterday, if we assume NOS for Q3 (the BEA’s estimate for it won’t be tabulated and published until next month) at around $5.3 trillion, then we can assume – we hope reasonably – that NOS otherwise due to non-artificial, private economy conditions is substantially lower. Maybe by a trillion (annual rate) or more.

The private economy, which is what really matters, can only be in far worse shape than it otherwise appears in this gigantically positive third quarter rebound (and must’ve been even worse during the prior one, its worst). Trillion, even at an annual rate, is an unbelievably massive contribution.

This would likely account for both the government’s gargantuanly oversized footprint (Q2 & Q3) as well as why the labor market hasn’t rebounded anywhere near as much as GDP. The government can pay businesses cash and hope that those businesses rehire, but why would they if our estimates of the private economy are anywhere close?

Some have, but not nearly enough to this point. 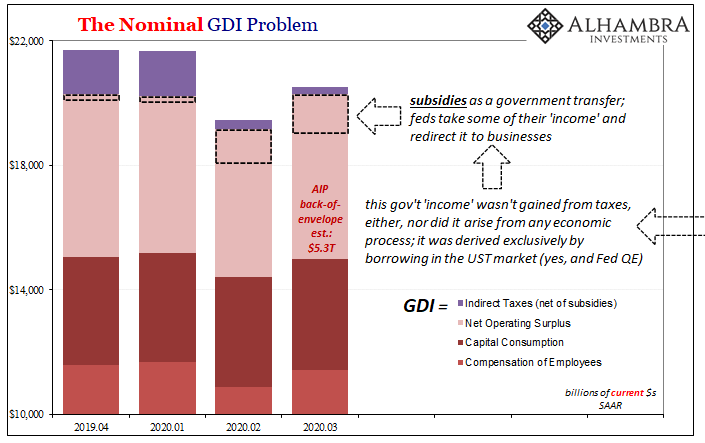 Not only that, this also gives us some insight into the current inflation “puzzle” (which has taken on proportions of another hysteria). While the GDI accounting makes it seem like that $1.21 trillion in subsidies came out of taxes received, the real world truth is that the federal government borrowed the cash for them (and other expenses) from the Treasury market.

In short, though these are huge numbers, all that cash has only gone to offset some of what is already an even bigger hole in the economy. It isn’t being added to an economy nearing recovery, or even moving toward true recovery, all those funds are in lieu of real economic processes that still aren’t happening.

The “not happening” private economy, that’s deflationary especially when employers continue to act as they have in holding down the labor market (amplifying the deflationary pressures of a wounded economy, rather than stoking inflationary ones consistent with a system legitimately close to being rehabilitated).

Instead of revenue and investment being received by the business sector, the bottom line of NOS, companies are getting paid by cash that has been borrowed via the government from the bond market (which has overvalued safety and liquidity) because it can’t be sourced from anywhere else; it isn’t like the government is taking from parts of the economy that are working (thus, paying more in taxes) and merely redirecting to those pieces not working (which is what a subsidy really means).

It is borrowing entirely from the outside because very little in the private economy is working (at the enlarged margins).

This is a bypass of stalled basic economic functions and a very precarious one; there shouldn’t be such wide, gaping holes the government feels it necessary to plug by the trillion. It’s instead the very obvious symptom of a deeply troubled underlying state.

But we know this already, and have for months now. GDI actually helps put some numbers on it. 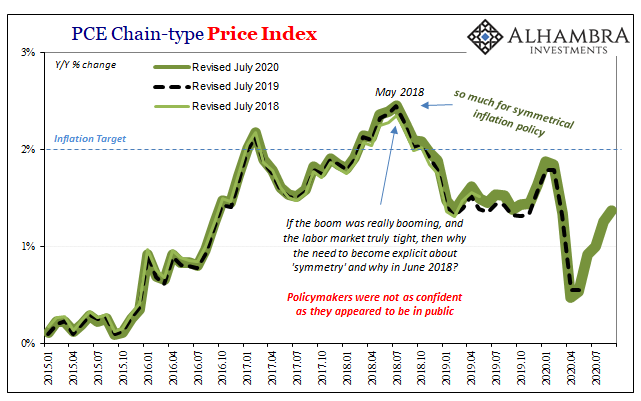 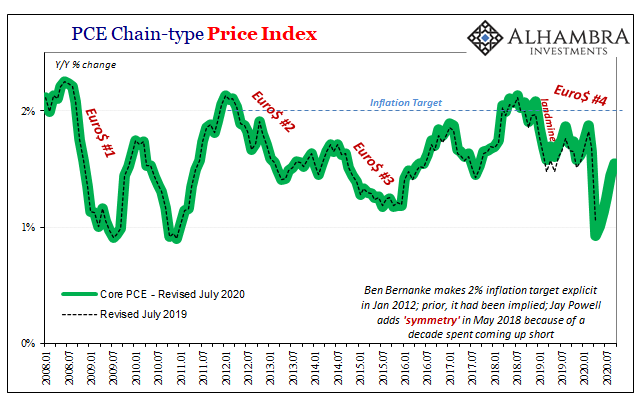 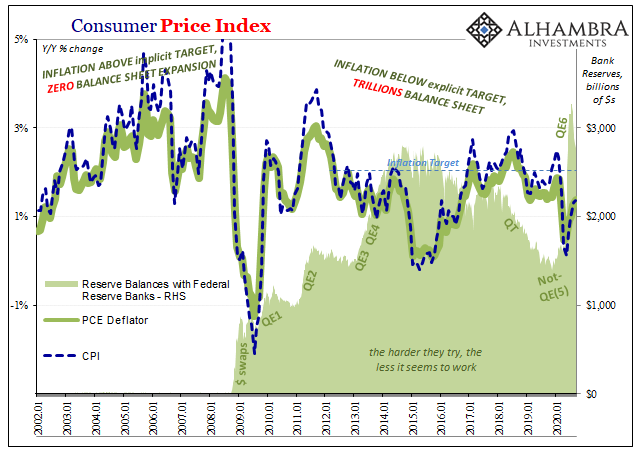 Despite all the talk of inflation and QE’s, fed “stimulus” done and to be done, actual inflation continues its rebound at a suspiciously gentle pace. The same confounding meandering upward we’ve seen time and again throughout the entire QE-era (Japan included) hardly consistent with the hugely inflationary acceleration which should have shown up by now if there had been any tangible basis for it.

The BEA today says that inflation in September 2020, the tail end therefore the absolute best month of the biggest quarterly growth ever, was entirely modest; quite suspiciously subdued after the Fed’s purported six-month long flood of digitally-printed dollars (bank reserves, specifically) and the feds injecting more than a trillion (annual rate) each of the last two quarters.

As has been the case since 2008, inflation – like the overall economy – is coming back lethargically as if “something” keeps holding it down. Cue Janet Yellen’s patented deer-in-the-headlights stare.

After revising both July and August downward, the headline PCE Deflator (the Federal Reserve’s favored metric) gained just 1.37% year-over-year last month. The core rate was 1.55%, having accelerated by just 10 bps from the revised August estimate. 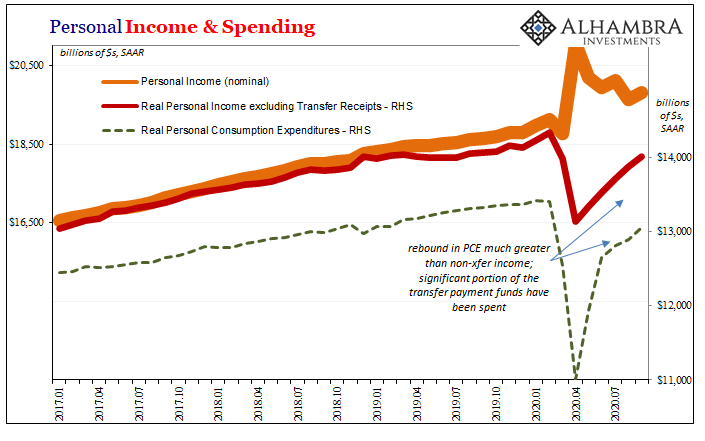 All these numbers are only updated through September, meaning that the current round of market “volatility” and angst (deflationary, too) hasn’t yet worked its way into the economy therefore it hasn’t yet shown up in the figures (for inflation, that starts with WTI). And while it may be difficult to find the federal government’s fingerprints on this rebound in those figures, and somewhat confusing to recognize how those numbers fit into the general schematic, I think most people intuitively understand what’s really been going on the whole time.

The government has, maybe as it should, tried to buy a recovery; to fill in such huge gaps because such huge gaps continue to be there. Sounds simple enough, but it never could be; that’s why the “V” narrative has shifted so much, focused now entirely on more of this filling-in-the-massive-gaps. And that’s really the point, and where GDI has helped the most.

Those gaps clearly remain. And they remain huge.

The private economy is the only thing that matters here, and that is struggling despite the gobs of borrowed then redistributed cash and the even larger pile of fairy tales spun around bank reserves.