JP Morgan’s Jamie Dimon hasn’t produced an enviable track record opining on inflationary potential. He’s forever deeply entrenched in the inflation camp, and because he sits atop the corporate structure of one of the world’s biggest and most well-known banks, it does seem reasonable at first how his opinion on monetary matters is taken very seriously – despite repeatedly missing the mark by a wide margin.

Instead, they really just repeat themselves as if, oh, back in 2018 Jamie Dimon hadn’t said the 10-year UST yield was definitely heading toward 4% if only as the first stop on the way to 5% all because he, like Jay Powell, each were influenced by modeled projections of some inflationary pressures that didn’t actually exist (at least not in the real economy). For the record, the 10-year UST yield would go on to reach a record low of 1.43% instead while at the same time Jay Powell was backtracking furiously with rate cuts, both long before COVID.

There was that whole landmine thing and the collateral bottleneck potential surrounding it.

Back in December last year, JPM’s head was back at it, saying of even lesser Treasury yield opportunities post-COVID, “I wouldn’t touch them with a 10-foot pole.” For a time in January and February, it looked like he had backed into some wisdom. But then, mid-March, more things going haywire so that “somehow” the Fed’s RRP has gotten mixed up with LT UST yields leaving Jamie Dimon once again a more likely foil.

Give the man credit, he remains highly consistent, undeterred no matter how many times:

If you look at our balance sheet, we have $500 billion in cash, we’ve actually been effectively stockpiling more and more cash waiting for opportunities to invest at higher rates. I do expect to see higher rates and more inflation, and we’re prepared for that.

It’s at this point we have to wonder just where it is Dimon must believe inflation really comes from. A ghost of fake money (bank reserves) magic rather than the monetary phenomenon, so no surprise here’s JPM’s politician-of-a-CEO essentially arguing against…himself.

So JPM won't buy securities or lend…until rates go up (because inflation, supposedly).

For inflation and then rates to go up, there needs to be a whole lot of…lending.

In other words, you won’t see any real inflation (sustained, broad-based consumer price increases) without serious credit expansion. Putting the cart before the horse, Dimon is waiting for the consumer prices before issuing credit. SMDH.

It does, however, explain a lot about why his true inflation credibility lingers at around zero. This does not explain why his opinion on inflation and the value of safe assets continues to be splashed around as if somehow authoritative. He is in every appearance very good at running a major bank; understanding, truly, what it is his or any other bank actually does and why, not so much.

To put some more numbers on this – and not strictly for JP Morgan – we turn to the Federal Reserve’s Z1 Financial Accounts of the United States. Updated recently to include Q1 2021, maybe JP Morgan doesn’t want US Treasury assets but many of his peers absolutely still do. Not just UST’s but a pile more of safe, liquid agency debt on top. 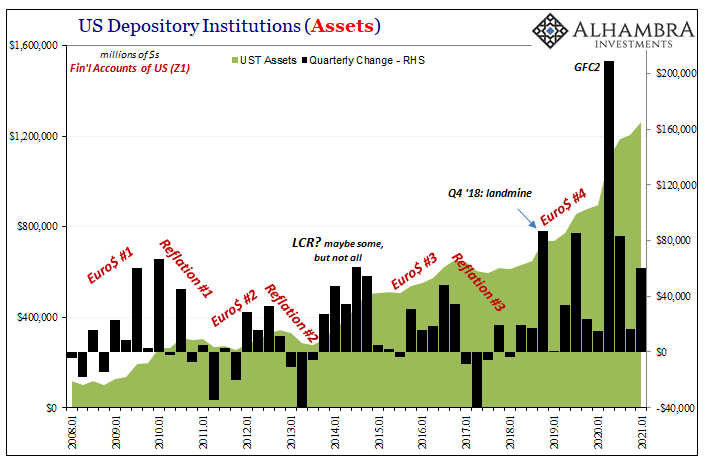 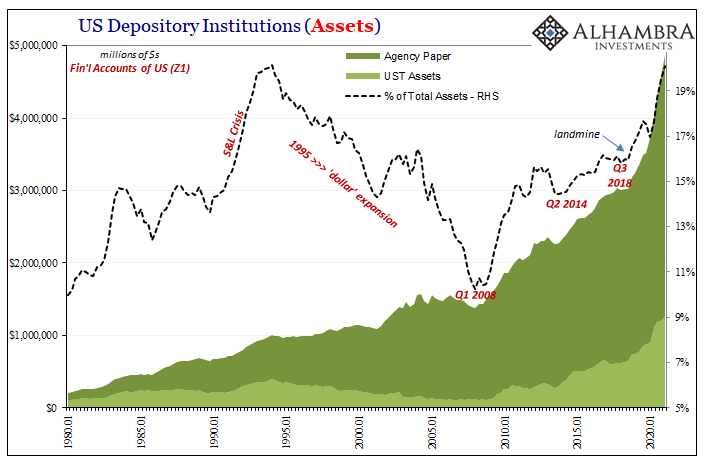 Even during Q1 2021’s “historic selloff” in safe fixed income assets like Treasuries and agencies, the banking system yet added (net) a whopping $60 billion during what to this point has been the only somewhat serious reflationary quarter. Prior to Q4 2018, this would have been one of the largest increases in the entire data set. We may not know who was doing much of that selling, but we now have a good idea who (banks) was doing quite a lot of the buying.

That was nothing compared to the $230 billion in agencies (straight paper as well as MBS) also taken up by the whole depository system. Combined, nearly $300 billion during a quarter when these very assets were supposedly not worth touching with a 10-foot pole.

The massive increase in these holdings brought the systemic proportion (for the banking system) put into them to the highest since 1994, back when the system was still trying to get out from the S&L Crisis. As you can see above, when banks turn to safe assets (which has nothing to do with any QE or central bank bond buying) that’s not usually a good period in economy nor for inflation – for obvious reasons though they may escape CEO Dimon. 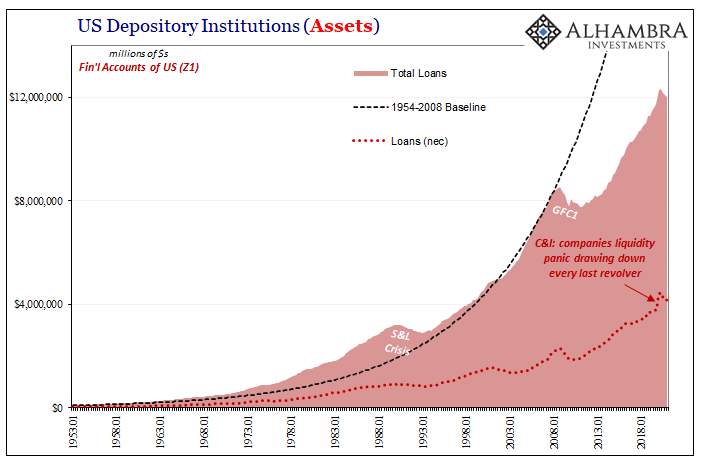 If there has been anything more unusual about the past few quarters, the love of safe and liquid assets hasn’t been that thing. Instead, it has been the turning away from loans and lending – there the data aligns with Mr. Dimon if, however, for the opposite reasoning.

Loans had already been largely avoided in the post-2008 era, but since 2011 had at least been advancing in nominal and absolute terms (though in linear terms, still shrinking).

Apart from the big jump in loans in Q2 2020 as companies all over the place forced banks to standby their existing revolvers, lending has only dropped ever since. No matter the Fed and its variety of puppet show variations, nor Uncle Sam’s overtures into increasingly every corner of the economic sphere. Banks are saying “yes” to safety in a big way and “no” to risk-taking in a bigger way (which is what loans are, especially in the sense of liquidity risks). 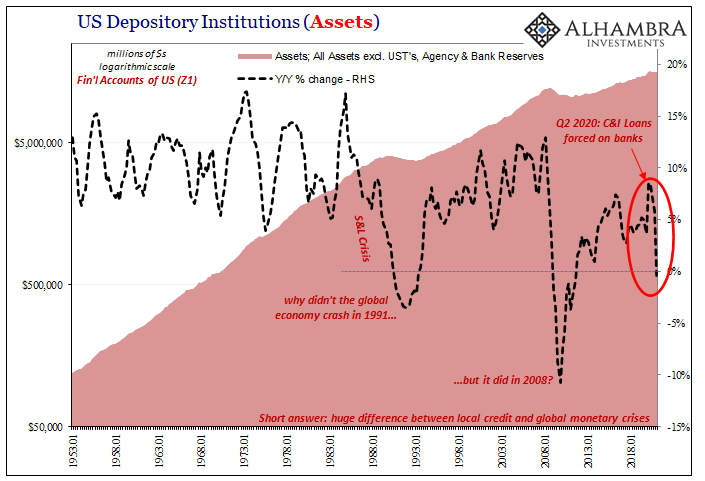 In fact, the banking system’s asset side has been driven exclusively by the most liquid assets: UST’s and agencies but also the Federal Reserve’s bank reserves. Each of those has increased while risk-taking types of assets are now explicitly shrinking.

If we remove bank reserves, UST’s, and agencies, you can see all-too-clearly why there hasn’t been any inflation in the post-crisis era – and equally why there isn’t likely to be anytime soon. The banking system – now through Q1 2021 – continues to de-risk the collective balance sheet.

Is this because depositories, like Jamie Dimon’s, fear out-of-control inflation over everything else? Absolutely not. They, like anyone else piling into UST’s and keeping those yields low, fear liquidity. They fear an economy that isn’t recovering as it was supposed to. They fear the overall risks that run in the opposite direction, the very real possibility of another monetary event (dollar shortage) to interrupt what small progress before even getting close, finding it prudent to prioritize safety above everything else.

How does anyone get inflation out of this?

You don’t. That’s the point. There wasn’t even enough before 2020’s downside kick. As I’ve said all along, it has been the inflation case (nonsense) which has always been the outlier. The media narrative doesn’t represent reality (repeating 2017-18). Nothing meaningful has changed for the better or at the very least the lessening of deflation. If anything, there’s a pile of factors to indicate worse.

Thus, bond yields (and the unspoken collateral side of RRP). 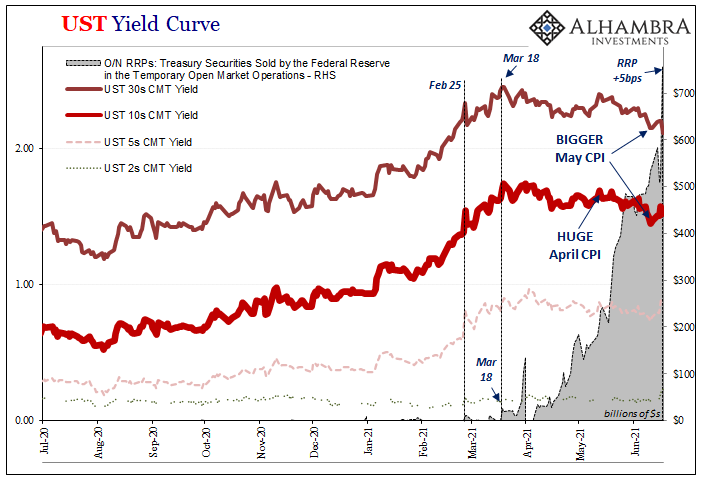