Following this morning’s Treasury bill auctions, each of the last three for the three shortest maturities (4-week, 8-week, 13-week) have each priced to yield less than the new reverse repo “floor” rate set by the Federal Reserve last Thursday. The first two of those, a 4-week and an 8-week, took place on the new RRP’s first day. The latest is a sale of 13-week bills completed just this afternoon with now several days in between to have digested any possible technical overhangs.

For this newest one, Treasury reports the high bid was for an equivalent yield of 4.5 bps, meaning every single accepted purchase offer returned less than just overnight rolling over at the Fed’s RRP. The median was 4.0 bps, and the low 2 bps. There’s some additional value in bills that isn’t captured by these return comparisons and characteristics.

Of the $57 billion auctioned, declared primary dealers took $21.96 billion for their own accounts. As is usually the case, direct bidders wanted and got very little of the action, “leaving” indirects to take up the majority, $30.54 billion.

Who are these indirect bidders?

Asking that question usually brings foreign especially foreign official accounts to mind. In fact, the terms have become synonymous in every conventional sense: indirects are immediately assumed to be foreigners. Submitting bids indirectly through some other direct bidder, and it could be the Federal Reserve Bank of New York taking them, overseas central banks and large overseas private banks do make up the vast majority of this category of bidders – but only in note and bond auctions.

It’s not just foreigners who can and do submit indirect bids. As has been the case for the entire 21st century, up front in bill auctions there are very different buyers lumped in with the same group. While they all may still be that, what you’ll see (if you look at the data Treasury helpfully puts together monthly) is that in the shortest run bills, in particular, the indirects are mostly other dealers (who aren’t buying specifically for their house accounts) and then “investment funds.”

These are really the only two types of buyers at bill auctions.

While we don’t yet have the investor class figures for these three auctions I’ve highlighted here, so we won’t know for certain until next month just who was in such high demand that they wanted these bills more than the RRP, using the most recent updates (to the beginning of June) there hasn’t been any change in pattern up to this month, more than suggesting that investment funds and dealers – not foreigners – are those paying these premiums. 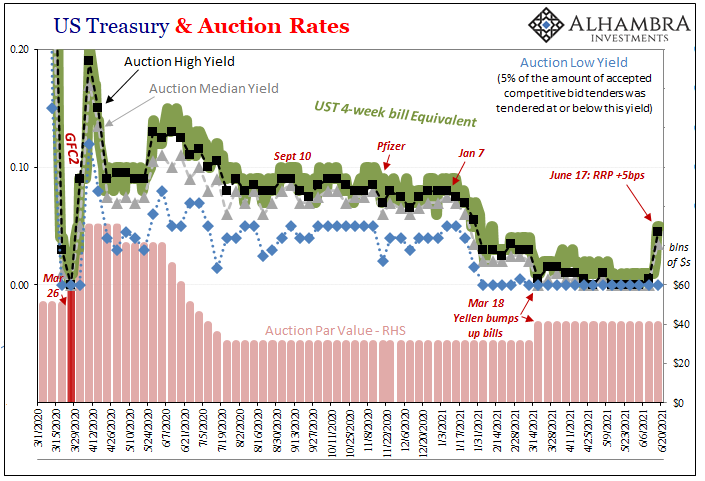 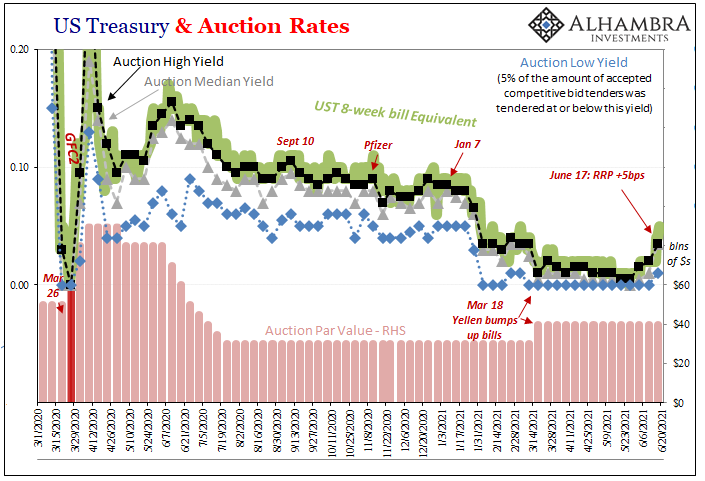 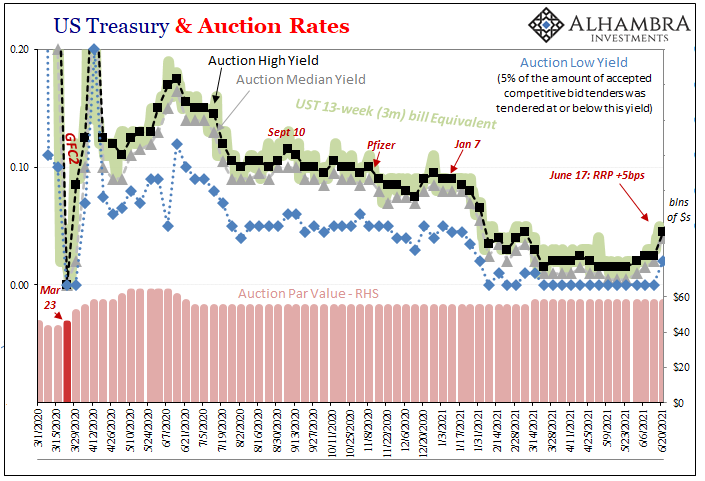 For example, the 4-week (28-day) bill auction held on May 27 (CUSIP: 912796D55), one which ended up with triple zeroes – high, low, and median accepted yields. The initial press release stated that primary dealers got their hands on $21.2 of the $40 billion sold while indirects took down just less than $17 billion. Most people presumed them to be foreign.

Restating the auction by class, however, Treasury reports that the category including “dealers and brokers” actually ended up with $25 billion (meaning nearly $4 billion were indirects) while “investment funds” received just about $14 billion. Foreigners? A tiny $312 million.

So, as indirect bidders bid serious premiums into their bill purchases you have to wonder why dealers, brokers, and investment funds are paying such skewed high prices when they have the option of parking cash in frictionless fashion at the Federal Reserve’s reverse repo window. For a monetary policy tool that’s supposed to act like a hard floor, this one’s awfully porous (again) especially since the specific parties of the financial markets going under it are exactly those who have rather obvious reasons for doing so.

At least it becomes obvious once you step out from Economics and its fixation on comparatively unimportant and uninteresting bank reserves.

When thinking about the repo market (or the broader category of “secured financing transactions” which includes derivatives), who is it that’s ultimately doing the pledging, repledging, borrowing, transformations, and rehypothecations that repo (and SFTs) is more and more becoming known for?

Chairman Powell and the FOMC did the world a huge favor, by accident, when they raised the reverse repo rate last week. Focused, as always, on the wrong thing (bank reserves), policymakers were more worried about money market rates other than bills.

But as I wrote on Thursday:

It’s supposed to be more “too much money”, higher chances for inflation. Instead, more RRP, greater anti-reflation across the bond market. With T-bill yields now underneath the RRP – just like 2017 – it draws a very real and tangible picture about why so much anti-reflation angst. An out-in-the-open collateral premium uncovered for the world to see.

Except, while it’s very easy to see today hardly anyone will be able to appropriately interpret this. The entire financial media and internet filled up with “too much money.”

It almost certainly wasn’t the RRP which had kept bill yields in check and equal up to last week – this was instead the nominal zero boundary. In other words, had bill and money market rates been somewhere north of it, as they are now, those for T-bills likely would’ve gone below the policy “floor” long before last week (such as May 27 and what that auction indicated for these conditions). In raising the RRP off zero, officials have inadvertently exposed their own flaws as well as the system’s biggest one. 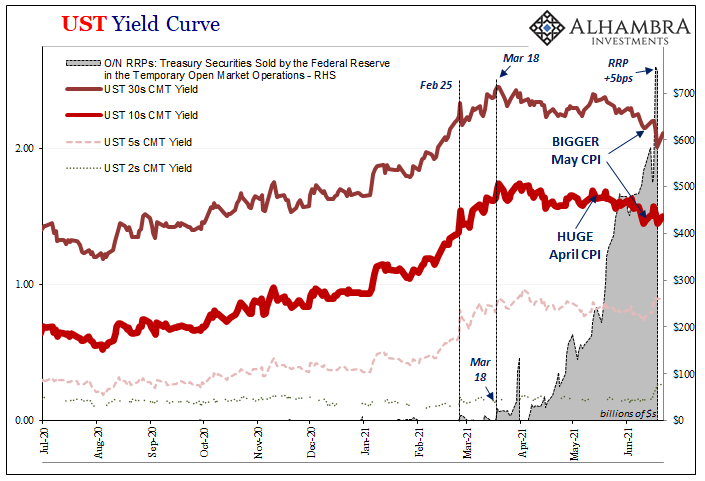 And since we know generally who ends up buying these instruments at these premium prices, the anti-reflation which has more than crept into the bonds and notes coincident to all these auctions shouldn’t have been any surprise.

It’s not that reverse repo usage is causing anti-reflation in LT UST yields, or vice versa. Rather, both are reactions to or symptoms of the same thing motivating brokers, dealers, and investment funds to go nuts at bill auctions. The heightened demand for collateral (constraint or even scarcity) is one factor driving increased use at the RRP while the negative implications (rising probabilities of something going wrong) beyond the short-term are priced as lower growth and inflation potential in falling LT yields.