A Real Example Of Price Imbalance

A Real Example Of Price Imbalance

It’s not just the trade data from individual countries. Take the WTO’s estimates which are derived from exports and imports going into or out of nearly all of them. These figures show that for all that recovery glory being printed up out of Uncle Sam’s checkbook, the American West Coast might be the only place where we can find anything resembling Warren Buffett’s red-hot claim.

That’s a problem, and much bigger one that may otherwise appear especially given current prices.

In terms of estimated trade volume, the actual tonnage of goods being transited across oceans, destination one of the world’s vast port complexes, the latest numbers seem quite good; if only in the same way as all recent statistics have. Base effects showing up when comparing to the previous year tell us little or nothing about how everything is truly getting along, except that it must not be nearly as bad as the worst global trade setback since the Great Depression. 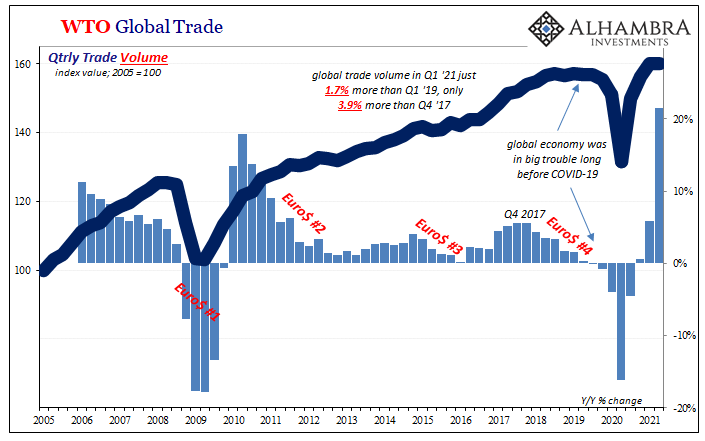 However, either of those are barely better than volumes put to sea (land and air) years ago. For all the fuss about America’s Pacific ports, that only deepens the deception. At its purportedly inflation apex during the first three months of this year, the WTO thinks global volumes were just 1.7% more than they had been during Q1 2019 – which was already a whole year into a worldwide slump (wrongly attributed to hurt feelings allegedly produced by “trade wars”).

And yet, you hear how container prices have skyrocketed which, like some particular vessel rates, makes it seem like there is and has been a truly robust rebound in worldwide demand and trade.

Instead, as John Dizard of the Financial Times found out – after actually calling around and asking questions like a true reporter – nobody in or out of the industry is thinking too much ahead. On the contrary, the American federal government has created a bubble of sorts, a massive distortion unbecoming the underlying facts more broadly.

Do you have any idea how many containers of stuff are bobbing offshore from Shanghai to Rotterdam, baking in marshalling yards or collecting diesel smoke film in traffic jams?

Of course not. Nobody does. The inventory en route around the world defies the imagination, not to mention the antique information systems in the shipping business.

Incredibly, since the Chinese make all the containers and those containers have to flow through already clogged port facilities (occasionally curtailed or closed by whichever COVID scare), manufacturers have just been making as many as they can and sending them off into the system if-ever, whenever, wherever any of them might come back on some distant future return trip.

Along the way, they get filled up and packed off to distant locales simply because there’s business to be made right now. Then what? Who cares!

The supply chain practitioners I’ve been interviewing figure that the port backups, unavailable trucks, Covid-19 restrictions and unskilled warehouse staff will be more or less ironed out by Chinese new year.

Another recent report adequately summarizes the same from the industry perspective of legit demand: “There is no COVID-era surge in global cargo demand. There’s a lengthy albeit temporary spike in congestion compounded by a localized, stimulus-and-savings-driven demand boom in America.”

This brings us back to that same question we’ve been asking – of the economy – since the reopening rebound took shape last May. Once all the “money” poured into the deep contractionary hole slinks away, what does that leave the world with? What does the economy look like when the artificial US stuff gets processed out of it?

If it didn’t look so great with all of those helicopters in the mix, I don’t really have to finish this thought. The further we get away from those Treasury dollops, the more it will look even less like recovery than already. 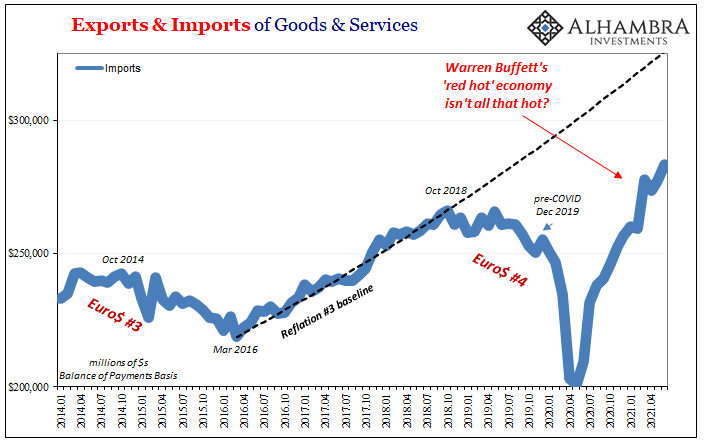 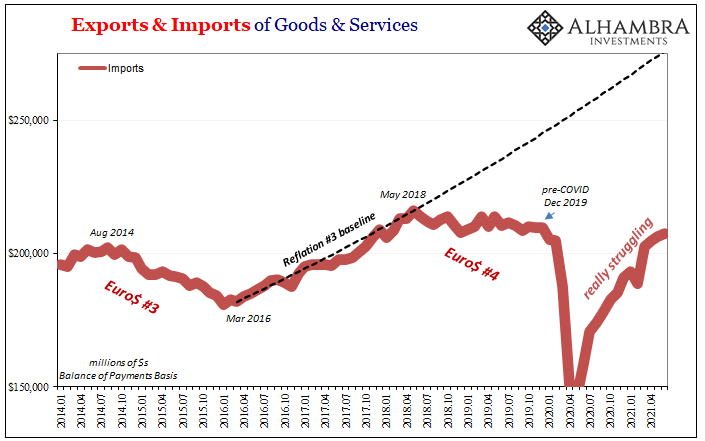 And we haven’t even taken account of the non-linear nature of what’s required from economic circumstances. If it hadn’t been for Euro$ #4, what would trade volumes have looked like by now? About 15 to 20% more than what they were in Q1, a lower bound estimate for how a real recovery should measure up; shedding more light onto just how deeply wounded the system has been and not just for the past year and a quarter.

If the mismatch between underlying fundamentals can create price-driven madness in container rates, what’s that potentially say about the “inflationary” potential of the goods being traveled around within them?

When the best of the best of the best segment of the global economy, with everything imaginable going in its favor (save one), and it still doesn’t quite add up, yeah, growth scare…Rather than [US] exports rapidly converging with [US] imports, maybe imports begin to converge back toward exports; neither having come close to recovery beforehand.

These are economic imbalances that look like inflation but are unsupported by the actual fundamentals. Not, then, sustainable price imbalances.

As I reviewed earlier today, there’s a reason why we look at the rest of the world’s economy; and it has nothing, or very little, to do with trivial curiosity. This sort of comprehensive analysis provides useful context and corroboration (of markets) for assessing a more realistic (not shouted narratives) state of the system – only beginning with the repeated fact eurodollar-related troubles consistently register in trade and foreign economies first.

The US could very well be doing very well, maybe even like it had been in 2014, but in the end that likely won’t make any difference if the rest of the world is truly struggling.

The pricing imbalances of the current trade and overall goods situation are misleading, masking the fact that the balance of the global system is, in fact, really, really behind. Obviously, this isn’t good for those places but, more to the point, time and again this doesn’t work out well for anyone else, anywhere else, either.