Money printing. Overheating. Going from an economy stuck in the mud to one rocketing ahead seemingly in the blink of an eye. Careless government officials steadfastly forecasting Goldilocks, surely whistling past the consumer price graveyard of stagflation misery.

Long believed dead, that seventies Inflation Monster relit maybe by necessity but now on the loose lurking just beneath the surface, ready to break free and create its own havoc.

It all comes down to inflation: the measure of rising prices that we all experience in our daily lives. And inflation is rising – fast, much faster than the Fed anticipates. Meat prices are rocketing at plus 7.7%…and dairy is up 4.2%, a considerable hit to family shopping budgets. Shelter – either mortgages or rent costs – are rising at about 3%, while car insurance is up 5%, and tuition costs and public transportation are both up more than 3%.

This means consumers are surrounded by rising prices on all sides – paying higher bills, paying more money at the market, paying more just to get to work.

You are totally forgiven for thinking the above was written today or yesterday, surely sometime over the past few months at least.

Published instead all the way back in June 2014 (just as easily could have been June 2018), the article and its major points hardly uncommon for its day. The author as well as the news outlet she worked for both wondering what in the hell the Federal Reserve, in particular, was still doing “printing money” when its presumed excesses were already causing obvious and grievous harm.

How can Yellen not know the economy is on fire?

A mere six weeks after the article cited above was printed digitally, like dollars, the Bureau of Economic Analysis poured even more fuel onto its incendiary diagnosis. According to the US government’s bean counters, real GDP during 2014’s second quarter had surged by a lofty four percent in real terms, since revised by benchmarks to better than five.

This was then followed up by Q3 2014 sporting yet another even greater (though today believed a bit less). Two huge in a row for the first time in a long time sure made it seem like something was really different. Good different. Inflation different. 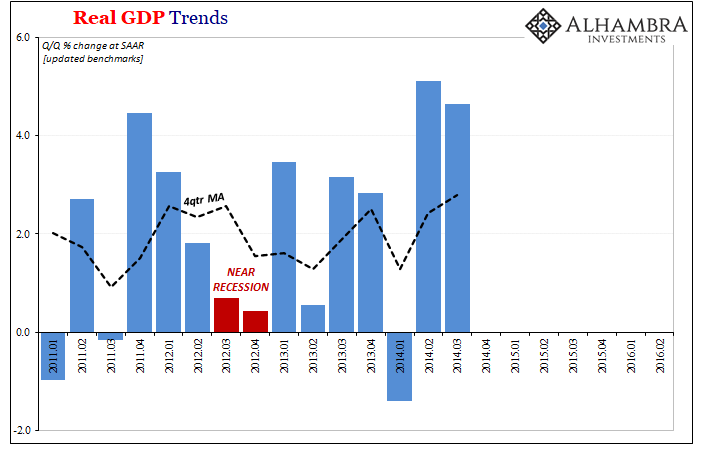 The Obama White House took some credit, as all in-office politicians do, before congratulating the end of “austerity” for being one primary factor in the economy’s apparent resurgence, surely setting the table for only better days ahead.

The growth rates of consumer spending, business investment and exports have all picked up, and the pace of declines in the Federal sector have moderated a bit. In addition, the State and local government sector has turned positive, after several years of steady cutbacks.

Everything, it seemed, had been turned up to eleven and for the first time since before 2008 (or 2001) it all felt like it was finally coming together all at once. All that “stimulus” plus promises of an awakening global economy put many in a high mood while forcing others to sound the inflation alarms.

None more so than what summed up this view taken from the perspective of the labor market; the so-called “best jobs market in decades.” And the label was itself technically true (though actually demonstrating instead just how pitiful economic conditions had been for too long). 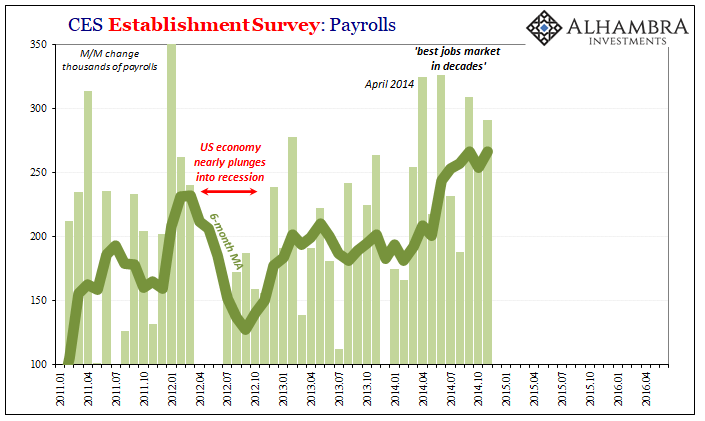 When Ben Bernanke back in September 2011 said that inflation pressures would be transitory, his view first proved correct if for the wrong reasons (dollar deflation of Euro$ #2). The labor market not oil prices guided the Federal Reserve’s modeled predictions, and in 2011 – contrary to an actual recovery trend – the employment condition remained steadily woeful, leading most Economists to conclude the economy wasn’t yet close let alone above its potential.

By the middle of 2014, this had clearly changed or was changing unusually rapidly (for the era) which drew inflation back to the conversation. If there was a detectible difference in outlook in the middle of 2014, it was between the Yellen Fed’s view of a full recovery bringing on slowly rising inflation and the throngs of others more and more convinced by the economic data of that time the greater risks were entirely on the side of overheating. 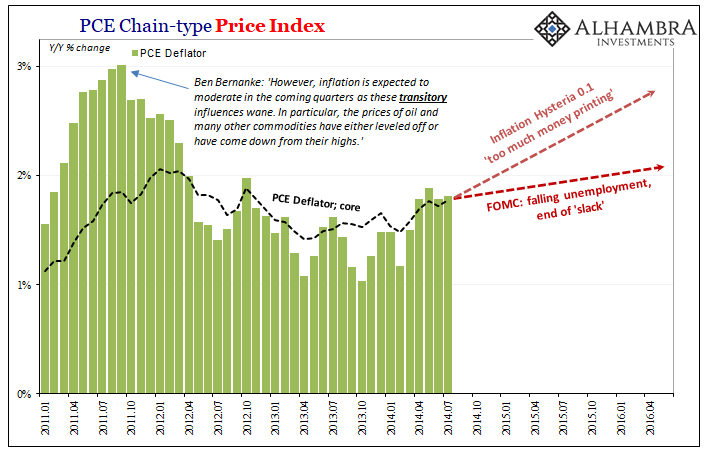 No one, very nearly no one, was heard to voice the actual base case presented by the system itself. This majority opinion taken from the real economy as well as the participants deep inside the actual monetary system, therefore no one at the Fed, and it had never once taken on these upside proportions.

On the contrary, there had been some minor optimism expressed in the middle of 2013 (wrongly assigned to some “taper tantrum”) that perhaps the global economy might not be as awful as it had been during 2012. That’s all it ever was, not at all the same thing as some recovery stance.

To my point here, however, from late 2013 right to the opening of 2014 this majority opinion changed, alright, but back toward the deflationary direction all over again! Even as US data kept getting better and better and better, the real underlying baseline case was unimpressed especially by the fact there were more than scattered indications throughout the rest of the world serious trouble was brewing. 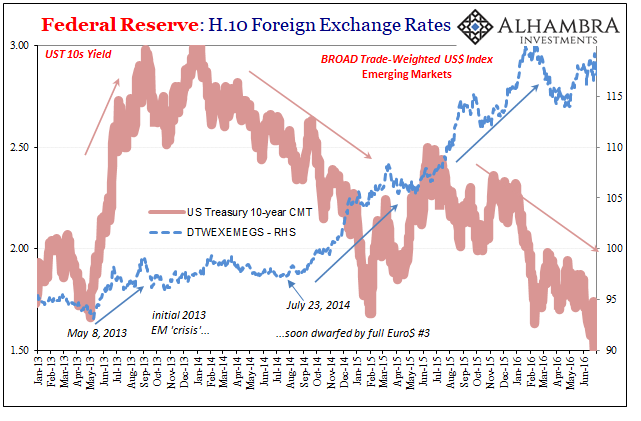 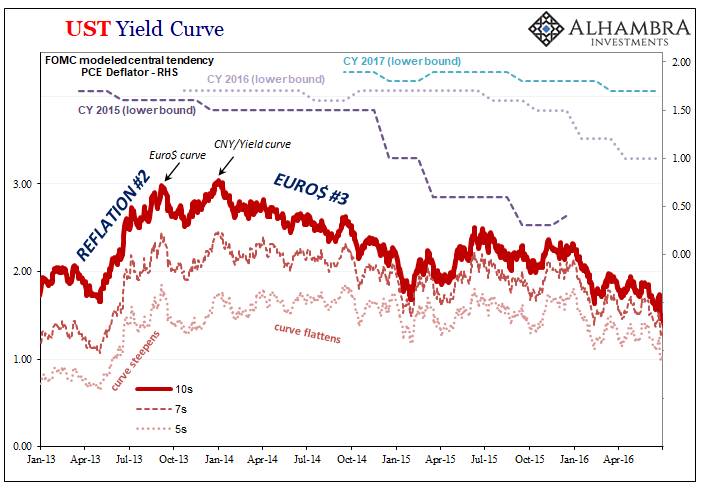 This didn’t make the news nor into any Federal Reserve model, both these deficiencies leading the public to believe in what had always been two varied versions of the same inflation unlikelihood. The mainstream impression was one of accelerating inflation if not in very close danger of way too much, yet this popular convention was left totally in the dark, not a single whisper about the growing certainty where it truly counted, one more and more devoted of deflationary conditions not in the future but already in that 2014 present.

Bond yields. Eurodollar futures. Then a rising dollar. Oil crash. Deflation out of the blue? Not on your (inflation) life.

This rising rather than fading deflationary potential became more visible in other places around the world first. This, then, the very reason why we pay close attention to, and derive much useful analysis from, that rest of the world. 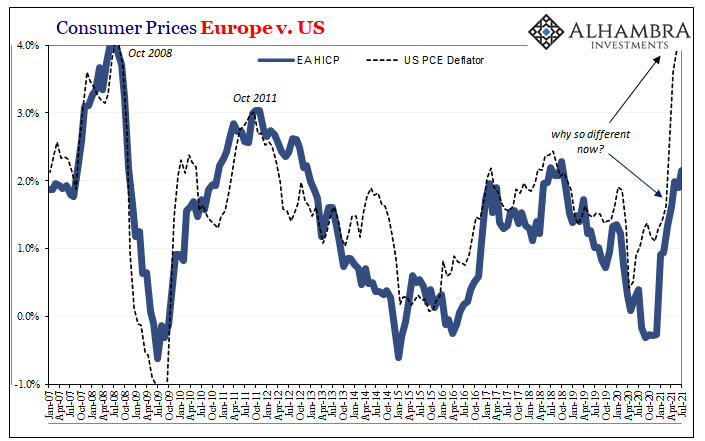 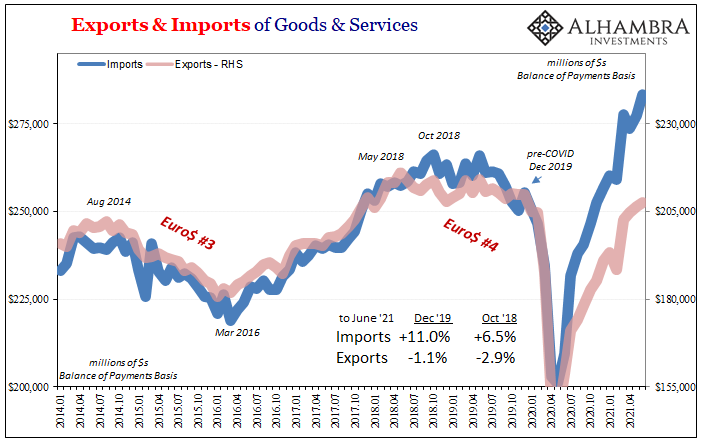 The US economy, its labor market in particular, might appear to be going gangbusters, but if such proves to be an isolated case, uncorroborated by similar proportions elsewhere, in the end it won’t matter the best jobs market in decades – and not just about the predicted inflationary bump which never arrives.

Global factors. These don’t just refer to what’s going on outside and overseas, rather they represent the entire system and all in it; American economy included. Therefore, any discrepancy, as there had been in 2014 (like 2018) was about timing instead of condition or direction.

For bond yields, then, it would seem sensitivity to fundamentals not exclusively domestic. Term premiums or not, lower yields were reflecting global setbacks and the rising probabilities of more and worse ones. Maybe the US wouldn’t fare as badly (it didn’t, but it wasn’t unscathed, either) but that’s not what drove UST yields then nor would it be in them now.

Global economy and the global money which drives it (repeatedly into the ditch).

Quite simply, what priced falling bond yields throughout 2014 – again, even as US data surged in seemingly every possible economic account – was the unappreciated high probability (then reality) for global dollar tightness which would inevitably trap everyone within its economy-destroying vise. It might ruin recovery possibilities for others first, but in the end that vise comes for everyone including the mighty U S of A. 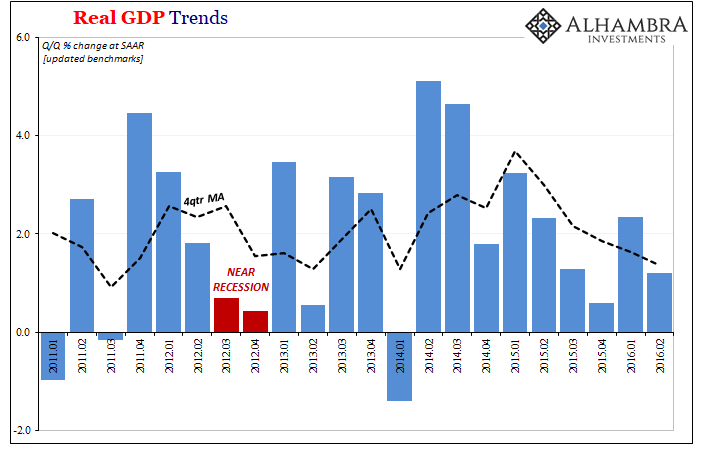 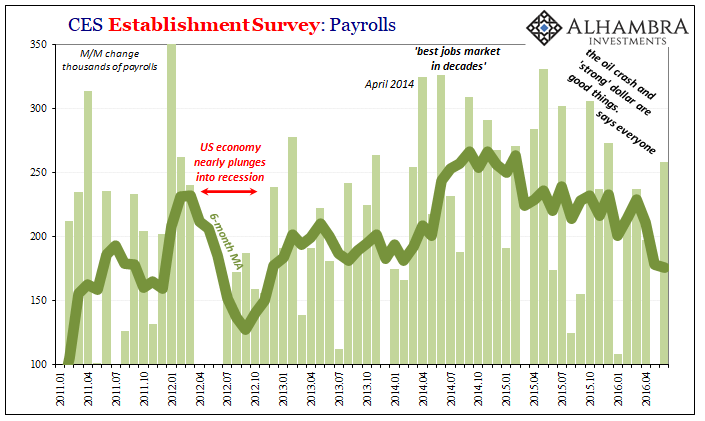 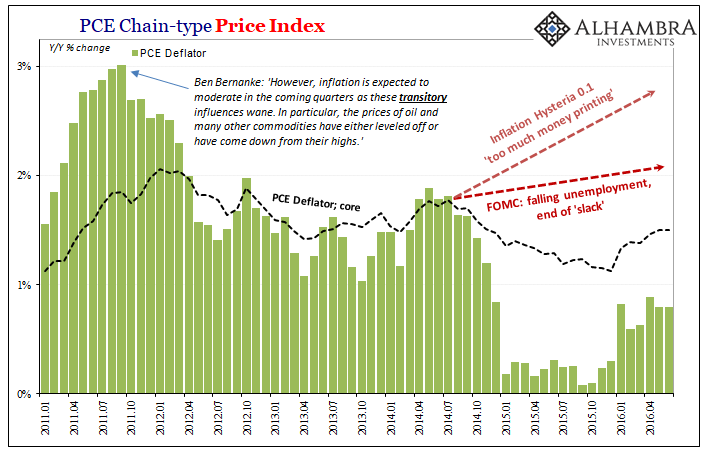 This was, for those preaching inflation, their 2015 (and again 2018) “puzzle.” It didn’t matter, as it turned out, “austerity” was ending nor did it make a bit of difference QE-on or QE-off. Where the Fed kept searching for its rate hike exit point throughout ‘15, what came back to them was instead solid economic weakness and “unexplained” turmoil here as well as overseas (why did CNY collapse in early August ’15 then two weeks later flash crash Wall Street?)

The disinflationary kind here at home, outright deflationary of the most devastating type in too many places around the rest of the world. Both the products of unevenness in the same global dollar shortage.

Twenty-fourteen’s seemingly solid promise of domestic inflation didn’t disappear, it never really had a chance; undercut the entire time it was rising toward and arriving at its domestic zenith. Hardly “unexpected” at all, though the media made its own narrative out of Fed models, there had actually been far more (useful) to warn otherwise.

There just might be a lesson in here somewhere. 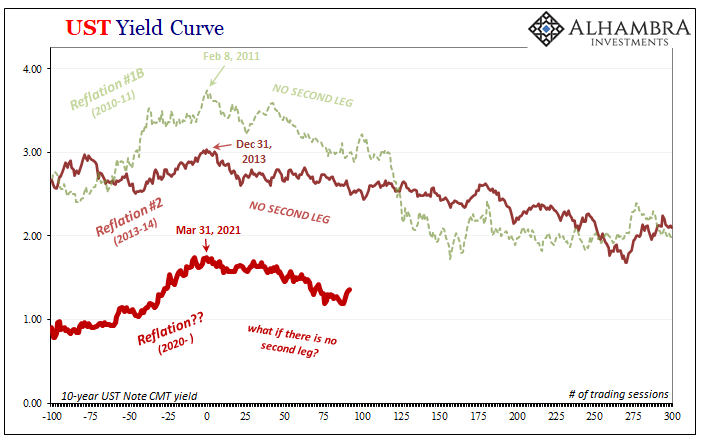