China’s Managed Decline Ain’t Ever To Be Grand(e), It’s (euro)Dollars

China’s Managed Decline Ain’t Ever To Be Grand(e), It’s (euro)Dollars

Some wanted to call it China’s Bear Stearns, and over time it may end up being seen that way. And that would be the right way to see it. What Bear’s March 2008 demise had represented was the watershed event for the eurodollar system, the final straw which finally broke the camel’s back. In the same way, CNY’s was broken by this other.

First, though, Ben Bernanke had made the terrible mistake of thinking his “bailout” of the old Wall Street name would end the crisis. Instead, it began the new monetary era. 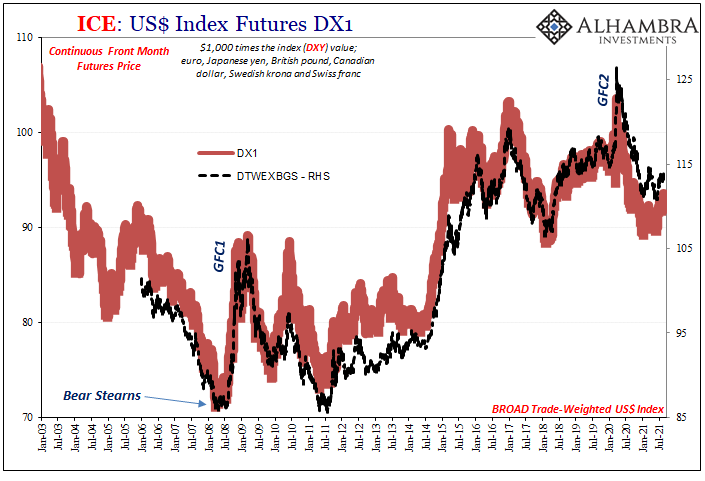 What followed from that inflection point wasn’t just the worst planet-spanning financial crisis since the Great Depression. Having little to do with US subprime mortgages, the global reserve monetary system which had supported cooperation and legitimate prosperity throughout much of the world behind eurodollar globalization was cracked like Humpty Dumpty.

All Greenspan’s Horses and all Bernanke’s QE’s could never have gotten it back together again. Instead, all the world’s financial media failed to print poor Humpty’s obituary.

But in the early days of this monetary regime change it had been assumed the chaos and nagging depressionary effects would only limit prospects across the developed world. Emerging markets were widely believed indestructible and bulletproof even after the events of 2008 and early 2009. Mohammed El Erian’s “new normal” only applied to those places commonly believed directly impacted.

Some would even claim this was the opportunity for particularly China. They could use the crisis to rewrite the rules (goodbye King Dollar!) for a new Chinese Century. Europe and North America would be left behind as Asia and Latin America moved onward without them.

Except, no. There had never been a genuine opening for something to replace the eurodollar (not dollar) standard. Bear Stearns had delivered its fatal wound, but since no one realized how the global system actually worked (yes, I fully realize what I’m saying here) there was nothing plausibly available to take over from it. Just one wasted QE after another.

This meant the entire global economy – and all in it – would have to suffer the deflationary, growth-destroying fallout at some point.

It began to dawn in markets (not stocks) around the time of Euro$ #2 (2011-12). Europe might have been caught directly at the center of that crisis’ crosshairs, but the longer run damage being done was just as potent and lasting as in these other parts in question. Including China. 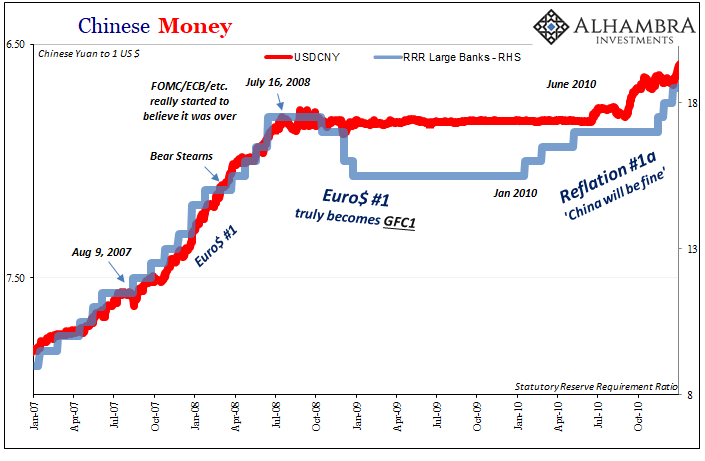 For their part, the Chinese had reacted predictably to the original dollar shortage in that fateful summer following Bear. It all may have seemed a localized problem of subprime mortgages before then, yet not long afterward the eurodollar breakdown truly went global. By mid-July 2008, even the PBOC got sucked into the swirling vortex just as policymakers at the Fed (and elsewhere) were thinking it was nearly over.

The Communists in China responded as any good standing Keynesians, which, by truth, they’d been taught to be – “loose” monetary policy and a healthy (massive) dose of fiscal spending. As in, waste.

For a temporary recession, who could argue against? This is what the standard textbook says should be done when faced with a transitory shortfall in “aggregate demand.” Though worse elsewhere, still a serious setback for the Chinese.

Euro$ #2, though; maybe China wasn’t so bulletproof, after all. It wasn’t just a hypothetical question pondered at various staff levels at whichever economic or financial authority. 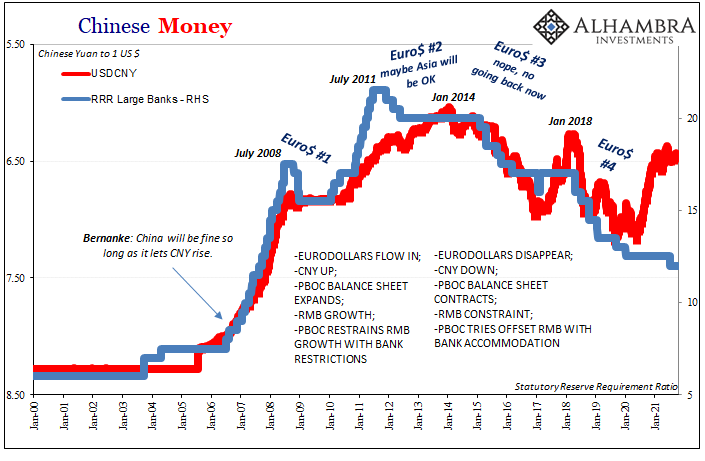 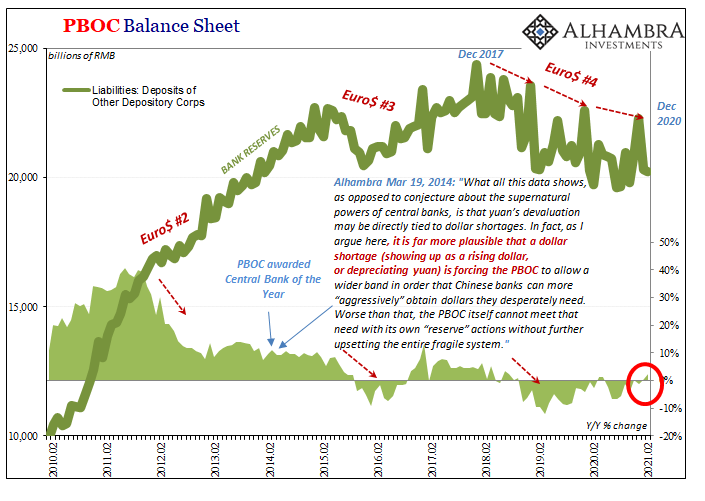 Xi Jinping came to replace Hu in late 2012, and throughout 2013 his “reform” agenda was greeted by Western cheers. The new Communist leader was strengthening, we were told, China’s migration toward the brotherhood of neo-liberal states. All the while, well, Document #9.

This all coalesced into what’s been called Document No. 9; an anodyne name given to what doesn’t really have an official title. It was simply the ninth paper to be published by the Party’s General Office in April 2013, but it was an unappreciated doozy which mapped out the direction China has eventually followed under Xi Jinping.

Chaori would become a quasi-household name that year once trading in its bonds were halted signaling how a default event for them was pretty much inevitable. While distracted via the wrong interpretation of “taper tantrum” on this side of the Pacific, the markets in China were embroiled in a confusing ocean of sudden chaos during the hottest months of 2013 (the Summer of SHIBOR).

If one might have wondered why Reflation #2 ended up being so short and amazingly condensed, finished off after only a few months by early September 2013 in eurodollar futures, Chaori would’ve been a good place to start looking for global answers. Its somewhat meandering story, and ultimately its fate, were looked on as part of Xi’s commitment to a more market-oriented approached when in fact it was really would be China’s Bear.

A monumental breakdown and regime change far more significant than the minor trivia about a small company’s missed coupon payment. As their “Bear”, this didn’t mean, however, the start of a panic or crisis, rather something far worse. It was the moment when the eurodollar finally caught up to China. 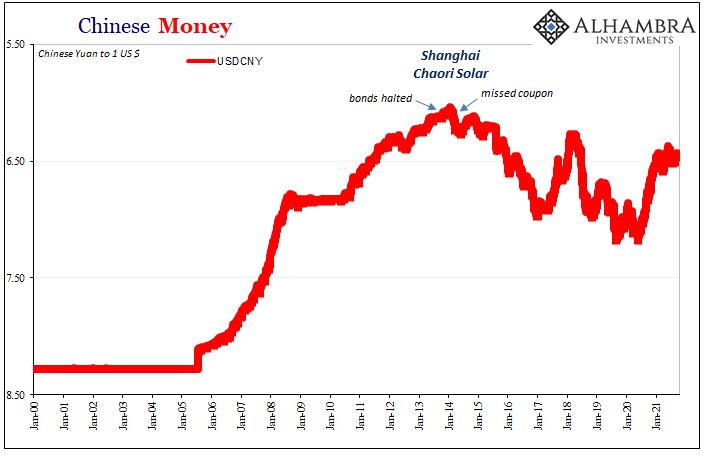 Defaults weren’t “allowed” over there before, not during the nominally capitalist phase of Socialism with Chinese Characteristics. This had actually been one of the West’s most fervent complaints, how the Communists weren’t playing “fairly” when artificially propping up or subsidizing anyone remotely connected to a local government minister.

To then, in 2013, send signals the game had changed it was believed the changing game was political rather than economic; it was economic before it became political. Xi had realized, or at least had begun to seriously suspect after Euro$ #2, the game which changed was the entire global economic arrangement.

If the economy worldwide wasn’t going to be the same after the US Bear Stearns, and it wasn’t, this would almost inevitably mean the same for China. The road to the 19th Party Congress (2017) began with Chaori, and Li Keqiang was given (by Xi who hadn’t yet fully consolidated his powerbase) only the one more chance (2016’s One Final Keynes!) to pull the Chinese off of it.

That one little default really had been a watershed if not in the ways corrupted Western imaginations stuffed with QE’s could have imagined. The brave new world post-Chaori in China has been the Chinese adapting to the same post-Bear everywhere else. By letting this one firm go down, the Communists were throwing in the towel on China’s several decades of its capitalism phase.

Ever since, officials there (and here) have given many different slogans and thrown around various names, but the only label which comes anywhere close to accurately describing the situation is: managed decline. That – more than anything – is what Chaori had meant, announcing the transition to those able to interpret properly, and why over time it has been near exactly like Bear Stearns.

Before this latest one, however, defaults had become more commonplace. Again, this consistent with managed decline rather than neo-liberalism. As I keep writing, China is not going to ride to the world’s reflationary rescue because there’s no point if the global economy remains in the same post-Bear broken state.

Here’s an example of official policy in action from July this year:

Except, again, no; not a “growing” reluctance at all. This is no new development catching authorities offguard.

The Chinese economy, like the global economy, is in terrible shape. It hadn’t recovered from the last one, the Great “Recession”, and there’s every reason to believe we will all simply repeat the futility after this latest one (the “COVID” “recession”). As I have been writing since October 2017’s 19th Congress, the Chinese have been working tirelessly to batten down the hatches rather than waste their time bothering to piece together “rescues.”

Decline is near certain, whether it can be sufficiently managed is the actual challenge which remains. 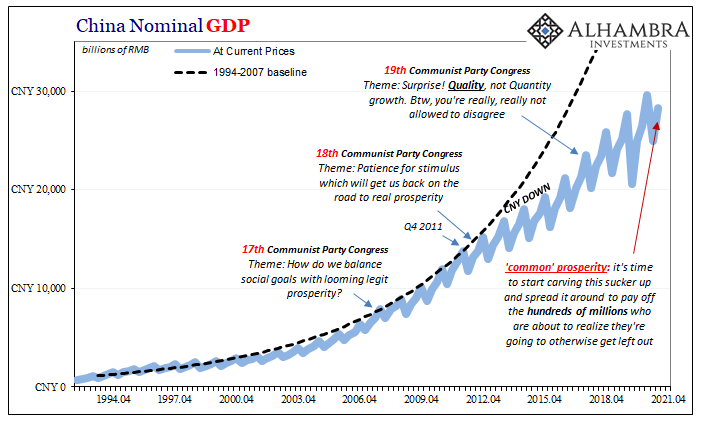 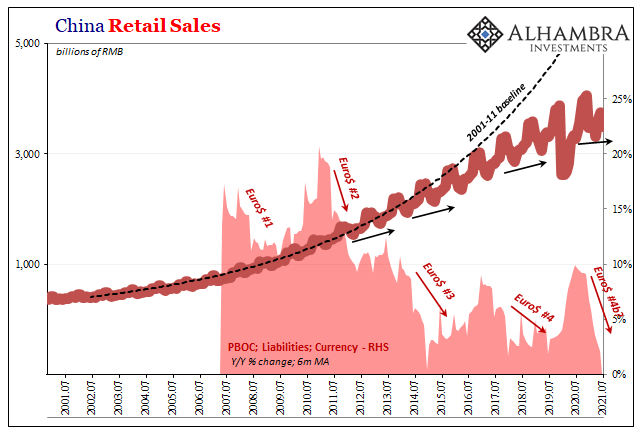 Evergrande is a much bigger one, no doubt, but in some ways it has already been part of the “plan.” Authorities over in China will do whatever they must to maintain calm and order in the short run – the “managed” part of managed decline – if only to keep the Chinese people (and Western “observers”) from realizing what’s truly at stake, which is a hell of a lot more than potential short-term market disruption.

Evergrande, therefore, isn’t really their “Lehman” because they’ve been working it out, generally speaking, for already seven and a half years since Chaori. To many especially here outside China, Evergrande will come as a shock if only because they never realized what early 2014 had already proposed

Evergrande, therefore, comes as a shock in the context of 2021’s “growth scare.” So much of the “growth” Economists and central bankers have been counting on was supposed to be Chinese. Suddenly seeing those chances through the lens of this property developer, and how its fate looks a lot like Chaori, what little of “recovery” possibility gets dimmed that much more; Evergrande ain’t something new, merely the biggest so far making what it really represents (not inflation) that much harder to ignore.

The world cannot be the same as it was before Bear. Either one.